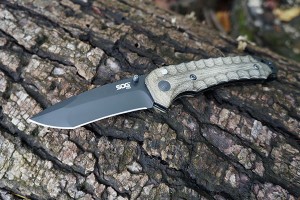 For the readers who caught our review of the Q Series Multi-tools from SOG Tools, you’ll be glad to know they weren’t the only items the Swanson Media Group staff members were able to put their hands on at SHOT SHOW earlier this year from the company. SOG Tools new Kiku Assisted folding knife was also on full display along with the Banner knife debut. I was lucky enough to take an extended walk with the Kiku Assisted after the show to spend some quality time at home, work and play. 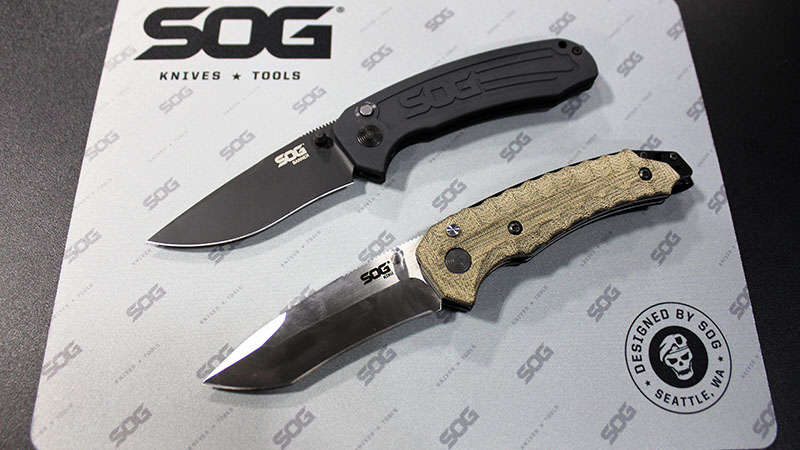 As part of the continued collaboration with master blade maker Kiku Matsuda of Japan, the Kiku Assisted eloquently extends SOG’s lineup showcasing Masuda’s unique designs. Known worldwide for his complex and artful grinds offering more twists and turns than a Dallas Metro road map, Matsuda’s form and function combine for amazing projects. One look at the Kiku Assisted and it was no doubt who designed it.

When my test sample arrived for review in a plain black and gray presentation box, the 3.5” assisted folder looked anything but simple. My first impression of the Kiku Assisted, I absolutely loved the look of this knife. The mixture of textures, colors and sleek lines of its design make for a visually well-balanced appearance. I appreciate the fact SOG didn’t go overboard adding fancy wood grains or tons of laser graphics on the knife. The simple black and grey “worn look” didn’t scream “new knife” but instead gave off the same vibe as a well-made tool or sculpture. 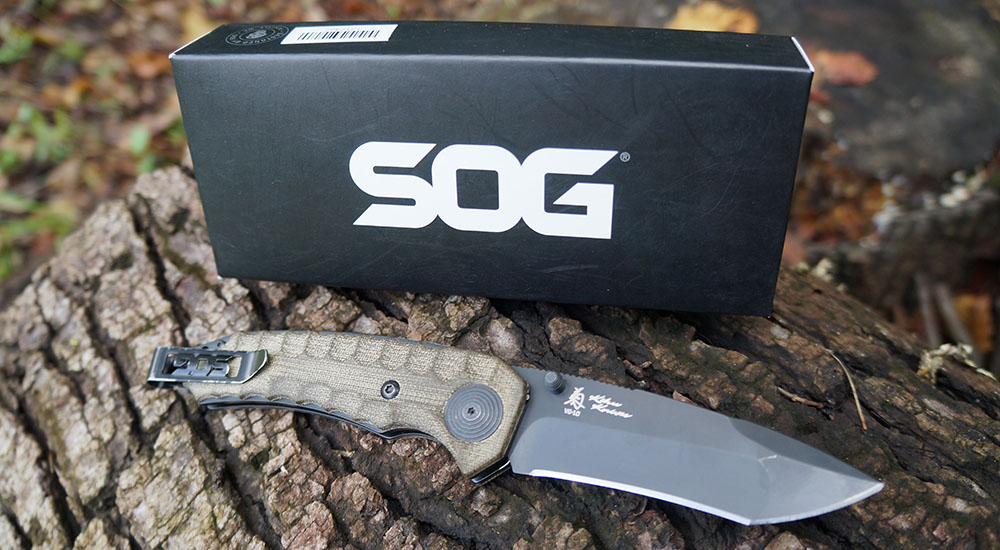 One of the impressive features on this knife that immediately stood out was the green linen micarta grips commonly known as scales. This material is usually reserved for more expensive knives due to the amount of labor and difficulty in working with the material that is involved. The end product offers a unique and attractive grip that gets even better as it begins to wear. The Kiku Assisted can alternately be had in a satin finish sporting a set of brown scalloped linen micarta grips.

Coming in at 4.60” closed and weighing 5.6 oz., the Kiku Assisted is a little larger than some of the other every day carry options on the market, but I found it to carry well riding low in my pants pocket using the deep carry reversible clip or even clipped onto my belt. The Kiku Assisted fit well within my hand of every day usage but at 8.1” fully opened, it won’t go unnoticed if trying to use discreetly in public.

So where does the assisted in the Kiku Assisted come from? Only from the cleverly named SOG Assisted Technology (S.A.T.) of course! This technology works through the balance of opposing high-tension coil springs. As you initiate the opening, the force propelling the blade open becomes greater than the force keeping it closed. Sounds simple enough. I found the action relatively easy to open. Bronze bushings offer a lightning fast deployment once the blade is set into motion. The thumb studs are reasonably placed, but I did have them snag on my pants pocket more than once trying to retrieve the knife.

The blade is made from high-end VG-10 stainless steel. Produced in Japan and commonly used in kitchen cutlery, the steel is designed to hold an edge well, resist corrosion, and be fairly easy to sharpen even for novice. I found my test sample extremely sharp right out of the box. The blade steel runs 59-60 RC on the hardness scale. The stainless liners were also treated to the same TiNi finish, although with a little pocket time, I’ve found the areas outside of the blade to already show signs of wear. That said, I haven’t seen any loss of finish on the blade.

The overall performance of the blade was very impressive for a knife in its price range. I was impressed by the saber grind up front moving into a hollow grind moving towards the grip with a harpoon-like unsharpened swedge up top for piercing with a good reinforced tip. The hollow grind is located where most all hard-cutting tasks are performed and its design traps material at its saber grind transition to help pull the edge through when cutting. The blade’s spine offers a nice shelf for choking up with the thumb or when light batoning. The addition of a lanyard hole in the rear of the grip allowed for use of a paracord loop to be added for retention when testing the edge against hardwoods, cordage, cardboard and other materials with no noticeable blade failures.

Unfortunately, there were a few items that I did not particularly care for when it came to the design meeting the function came into play. The liners rose above the micarta scales’ beautifully laid top and bottom scalloping and prevented the grip to benefit from it. Had the liners laid lower, the scalloping would have offered a great rear grip to the handle during hard cutting. The thin edge of the liner pressed into my thumb during hard use and made for an uncomfortable grip at times.

On the underside of the grip, the liner split into a very thin liner lock which did not exactly line up center of the blade for locking. While I did not have any issues during testing of the lock failing, I am not 100% confident it would hold during tasks such as heavy batoning through wood to make kindling. I would go with the fixed blade version of the Kiku SOG for such tasks first.

The Kiku Assisted also comes with a small push lock to release the lock and a thin safety switch to lock the opening feature out. Operation of the push lock was consistently smooth and easy. I did have the safety switch unintentionally flip a few times during carry. Luckily it is within easy reach of your thumb, but it was an occasional annoyance to deal with.

Over several months of testing, the knife picked up a lot of dirt, pocket lent and other foreign debris from being carried daily. None of this crud seemed to slow down the blade’s action, locking or prevent it performing any of its duties. Despite often being wet from the elements as well as sweat and wear, the metal showed no signs of rust inside or out. I kept it well lubed as a precaution using Modern Spartan Oil which offered no oil residue or greasy feel to the knife. The synthetic oil seemed to be designed perfectly for the needs of a daily carry blade such as the Kiku Assisted.

Overall, I found the Kiku Assisted to be durable and well made. Although a little larger than other carry knives I own, it fit well within my pocket and was easy to use. I like the VG-10 stainless steel choice and found no issue with the blade to maintain its edge. Regardless if its meat, cordage, leather or any other medium found in normal daily life, the Kiku’s edge is designed to perform well cutting and piercing them. The Kiku Assisted does have a unique blade design that might limit some heavier use as previously mentioned, but I routinely find it to continue being in my carry rotation with no drawbacks. If you are looking for a solid knife for your daily carry, I recommend you try a SOG Kiku Assisted knife for your carry needs.