Skip to content
Blog.GritrSports.com > How to Guides > Inoculate Your Mind And Body Against Panic Dumps
How to Guides 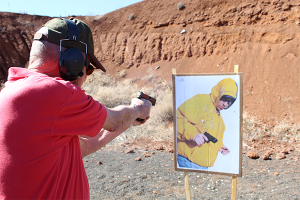 First, let’s deal with emotional panic. In considering the inability to respond to a threat, people panic because they’ve never thought about a situation and how to deal with it. Fear enters their mind which soon turns to panic. They’ve never been inoculated to a variety of situations and how to handle themselves. Panic is basically the mind calling a “cease fire” to the thought process until it can figure out what to do. Not knowing what to do, as well as the emotion evoked in the individual when observing what is occurring, clouds the mind and doesn’t allow for clear thinking.

During the mind’s “cease fire,” valuable seconds are being wasted that could save your life or the life of someone else. A good example of this is the Sheriff Deputy who was the school’s resource officer at Marjory Stoneman Douglas High School in Florida during the Valentine’s Day massacre in 2018. His failure to enter the school to address the threat arguably facilitated the high casualty number. I’ve seen this occur at vehicle accidents when spectators appear paralyzed, stand around looking at the scene, but don’t actively do anything to help the situation. It takes a person with the “inoculation against panic” who gives orders to these people to do something (call 911, get blankets etc.) until help arrives.

The Firearm As An Instrument

Many firearms instructors teach about the firearm, but few address it as an actual lifesaving instrument. They’ll give you the books and show you the firearm, but some never consider that the mind of the person and the will to survive is also important. The inoculation of the mind to a potential threat and learning how to deal with that threat both emotional and physical, avoids the panic that incapacitates a person to the point of no response at all.

Instead of the mind calling a “cease fire,” your mind starts giving you orders on what needs to happen. I’ve seen too many women, who after receiving firearms instructions, never pick up their pistol again, never train regularly and tell me that if they’re confronted, they don’t know if they could use their pistol to protect themselves. They lack the competence of their pistol, thereby the confidence to use it.

So, how do we inoculate the mind against this type of panic? When I instruct my students, we spend a lot of time on a very powerful tool: Visualization. It is said that “the body won’t go where the mind hasn’t been.” It’s important to visualize what you will do when you are attacked. Focus on “if, then” thinking instead of “when, then” thinking. Visualize the attack and play it out in your mind with an ending where you win the battle every time. Having a plan will help you avoid freezing when something happens. Expect the unexpected and you won’t get caught off guard. Back this up with the use of realistic situational targets and you’ve combined both the body and the mind in your inoculation.

In physical panic, emptying your entire magazine all at once is quite common. You may go to slide-lock before you realize you’re out of ammo. I’ve seen it demonstrated many times in videos when a private citizen just starts shooting at a perpetrator hoping one of the bullets will home-in on him/her. This is full-fledged panic without a focus. Bullets do not have homing devices, yet, and if you’re scattering your bullets in a variety of directions, you may injure or kill innocent bystanders.

We’ve seen videos of police officers dumping their entire magazine into a perpetrator, sometimes reloading and continuing to fire. You’ll notice that their firing is focused toward the perpetrator and in many instances, contact is made and is successful. Granted we’re all concerned, almost frightened to be hit ourselves, but generally police officers are taught to forego this emotion in order to protect society. The physical dumping of the entire magazine is generally in response to the perpetrators failure to comply with an order to drop the firearm or knife or whatever else he or she is threatening someone with. The police officer is taught to continue firing until the perpetrator complies. If that means the perpetrator has turned his back on the officer, but has not dropped the firearm, shots to the back may be the consequence.

In conjunction with the firing of your pistol until the perpetrator complies, there is the difficulty that exits when trying to stop firing. Officers are taught to shoot until the threat is no longer a threat. Sometimes that means dumping the entire magazine into the perpetrator as. But it’s not panic that creates the ammo dump in this case, it’s the perpetrator not responding to being shot and the suspect’s non-compliance. Dependent upon whether he recognizes that he’s been shot and whether the drugs/alcohol etc., allows him to respond to being shot, the perpetrator may continue his attack. There will be time displacement before both shooter and perpetrator are able to respond to what is happening to each of them.

When an officer or private citizen involved in a shooting realizes that the threat no longer exists, there is a period before the mind tells the finger to stop pulling the trigger. When you hear of a perpetrator being riddled with fourteen bullets, it is because the perpetrator’s mind or body did not respond to the shots and the verbal commands of the officer. The officer’s mind was preoccupied with the need to protect the citizenry and himself, and they have not yet registered the conclusion of the situation. The civilians mind concerned with self-preservation is hesitant to cease fire until visibly satisfied the attacked is incapacitated.

So how do you inoculate against the physical dump? Science has proven that there -is- a disconnect between the mind and body during times of stress. Police officers often report they never heard their weapons fire during a shooting, or never heard their partner shout at them. This further clarifies why an officer may not see everything during a shooting, such as bystanders or even fellow officers. Their focus is on the threat and everything else happening around them is inconsequential. This also explains why crowd distraction in the event (yelling, cursing, throwing objects) tends to take the officer or citizens attention away from the threat.

For a private citizen, this situation may overwhelm and mind and subsequently the body’s response. The participation in training activities such as Shoot/No Shoot scenarios and with multiple types of training equipment will give you the competence and confidence you need to assure yourself that your response will not be fueled by panic. This may go far in inoculating the individual and perhaps shortening their perception time subsequently the response time.

Much of what we learn about shooting is from television. The belief that one shot will stop a perpetrator is what we view on the screen. The one-shot stop is rare. Officers have found, as well as private citizens caught in the same situation, that the body doesn’t immediately react to being shot. It takes a moment for the brain of the perpetrator to register what is happening. It takes another moment for the body to respond. And dependent upon their adrenaline or mixture of drugs in the system, the body may not respond before the officer or private citizen places another shot in the body, due to the necessity of responding before the perpetrator fires or advances again.

Ask any police officer who routinely patrols, how do you prepare yourself to handle panic? The job of the police officer is to run toward the sound of gunfire or the sounds of trouble. The same applies to firemen or women who run toward the flames rather than away. Imagine the soldier in a combat zone that must patrol in hostile territory with the constant threat of bodily harm. In schools, children have fire drills and now active shooter drills which have them either leaving the building or staying put. The answer in all these instances is preparation and knowing that this preparation gives them the tools they need to calmly “face the music” in every situation. Panic can be controlled through inoculation of the mind and body.