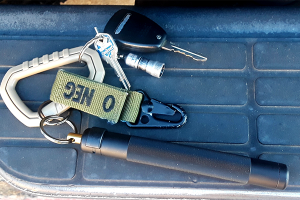 When I’m leaving the house, even if I don’t have a firearm on me, I at least make sure I have a non-lethal weapon on me. It’s better to be prepared with something then leave with nothing. Lately, I’ve been trying out the Street Defender OC Kubaton from ASP. The ASP Defender series are all lightweight, low profile, and can be easily carried on your keyrings. To be honest, I didn’t think anything special about the Street Defender at first. I thought it was just some other OC spray out on the market. It wasn’t until I actually sat down and got a good feel on the Street Defender that it really started to stand out.

The Defender is a finely finished, machined aluminum barrel that’s thin enough to fit in any pocket. The ASP OC Defenders just look like a high end flashlight. It doesn’t look like the typical pepper spray. I do like the fact that it’s slim and it doesn’t draw attention. It just looks like a slim flashlight hanging on my key ring.

There are three models in this family of devices: the Key Defender, the Palm Defender, which is smaller, and the ASP Street Defender, which is substantially larger. The Defender also acts as a traditional kubaton weapon, allowing you to hold the unit and jab the attacker or slash him with the keys. The Palm Defender is only 4-3/8 inch long, while the Key Defender is 5-3/4 inch long. Both units are 5/8 inches in diameter. The Street Defender is a bit larger but it holds more spray. It is 6-3/4 inch long and 3/4 inches in diameter.

All of the ASP Defender products contains 2 million Scoville Heat Units and each insert contains approximately thirty .5 second bursts. Each is packaged with an active “Heat” canister, and you can also order inert test canisters for practice. All the inserts are replaceable. Once your Defender canister is empty, just hop online and order a new canister for less than $10. The replaceable aerosol canisters are dated so you know when to replace them (they last up to three years each). The effective range for the Street Defender is said to be 10 ft. in a cone or cloud pattern.

Street Defender Design And Use

The actuator is made of solid brass (an actuator is the mechanism that controls the device: locking, unlocking, and spraying). Many other brands use plastic to save money in this area. The design of the ASP Key Defenders eliminates the likelihood of an individual accidentally discharging an aerosol irritant into their own face. Their horizontal firing system combined with a safety and thumb activated swivel actuator assures discharge away from the individual carrying it. The safety is easily recognized and released.

Discharging the system requires two separate and distinct operations to release and fire the unit. The wrap-around design makes it clear when the safety has been released and when it is in place. The wrap-around safety can be a little tricky to use at first. I spent a good couple minutes just locking and unlocking the Defender to get my hand used to the movements. It’s not like I find the swivel locking mechanism a weakness in the design, it just needs just time getting used to.

The ASP Defenders do something that I like in any tool: they serve multiple purposes. Rather than just being pepper spray, they are also a nice kubaton. Just hold the Street Defender closer to the bottom where the key ring is and now you can strike your target. Another unique feature of ASP’s design is that it doubles as a key flail. If you have a bunch of keys hanging from your ASP pepper spray device, just grip the cylinder and start swinging your keys in your target’s face.

They also serve as a tool that can break glass, of course, which is always a good thing. They offer pretty good spray performance for their size, but just as handily, they provide focused impact utility. The ASP Street Defender has become a part of my EDC collection. It’s a good option to have and it’s slim enough to just grab and go. The slimness of it just slides into my pocket. Just like your firearm, a non-lethal tool should be standard carry. Your EDC should also include a non-lethal option.

Get To Know ASP (Armament Systems And Procedures

One of the great things I love about Armament Systems and Procedures (ASP) is they offer training courses to police departments at no cost. ASP believes in the importance of proper training. The company provides roughly $2 million worth of training each year to law enforcement. For more than forty years, ASP has had a single-minded focus on providing law enforcement officers with the finest tools for safe performance of their duties, and industry-leading training in the use of those tools. Armament Systems & Procedures is a leading supplier of tactical gear to the law enforcement and military communities, and their EDC-friendly line of OC products is now available to civilians.

Overall the ASP Defenders are great tools that I highly recommend if you want impact ability along with pepper spray. This is an OC device that I’m willing to try out and maybe get to use it one day. You have lots of options when it comes to integrating OC pepper spray into your everyday carry. The easy and intuitive design of ASP Defenders make them worth looking at for your EDC. They come in a variety of colors to match your EDC style. It’s an ideal OC tool that’s safe, discreet, refillable, and easy to use. It’s a simple design that you can rely on when you’re in danger and the adrenaline starts pumping.