Skip to content
Blog.GritrSports.com > How to Guides > Explore Different Shooting Stances
How to Guides 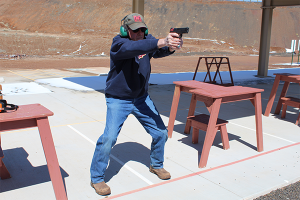 What is your stance (and does it matter)?

In the beginning, there was but one stance for shooting a handgun. You held the gun in one hand, one side toward your target, and fired. Your feet were spread about shoulder’s width apart, and your weak side hand was put into a pocket, or tucked in your belt. This stance originated with duelists, who wanted to minimize their chance of getting hit. This stance holds on among bullseye pistol shooters. This said, let’s look at the more practical stances over time.

This stance held sway until Fairburn, a British police officer, was assigned to the Hong Kong police. He found that his officers would naturally crouch when in danger. Thus he taught them to shoot from a crouch. Rex Applegate was sent to train with Fairburn when we entered WWII, so he could teach the agents of the OSS (later changed to CIA), who were dropped behind enemy lines.

Since Applegate only interviewed survivors (the SS and Gestapo did not send him after action reports), he decided the crouch was perfect. He then taught it to the FBI, and it became unquestioned gospel. I learned the FBI Crouch from an FBI Firearms Instructor, and I recall his very words:

I always questioned authority – still do – so I raised my hand and asked: “If the bad guy puts his arm in front of his heart, will it stop my round that is “gonna get him?”

The instructor tore off his hat, threw it on the ground, and YELLED: “Who the heck are you? What agency are you with? How DARE you question the FBI?”

(He never did answer the question.)

We learned, mostly from a Los Angles County Sheriff’s Deputy named Jack Weaver via a writer named Jeff Cooper, to put BOTH hands on the handgun whenever we could. While the stance was named the Weaver, I have a book from the 1930‘s with a picture of that exact position. You advance your weak side foot about shoulder width, with about 40% of your weight there, and 60% on your strong side foot. You turn your feet about 45 degrees to your right (if right handed), and grip the handgun in your strong hand, with the strong side elbow slightly bent. Your weak (support) side hand wraps around your strong hand, with that elbow deeply bent. Push forward with your strong hand while you pull back with your weak hand, creating an isometric stress.

I prefer the Weaver stance for several reasons. It is easier to maintain a stressed position rather than tighten your muscles with each shot to pull the gun back on target. In fact, once you get used to it, you will find your sights back on target without any further thought or effort. There are some other benefits from this stance:

In law enforcement, this is the basis of the Field Interrogation position, with your (empty) hands at mid chest.

With the start of Practical Pistol competition, many shooters adopted a more squared off stance. They stand with their feet parallel, about a shoulder’s width apart, as in the military position of Parade Rest. Then draw and present the handgun with both hands, with both arms extended but not locked. Viewed from above, you look like an isosceles triangle, so this is called the Isosceles stance. When police departments started issuing body armor, it had only front and back parts. Some agencies required this position, as it presented the attacker with the front face of the armor, not the gap on the sides. (Modern body armor wraps all the way around the body.)

Competitive shooters did very well from this stance, so many folks use it. I find some faults with it, namely:

I met a new Sheriff’s Deputy who had been taught the F.B.I. Stance, but made to shoot from the isosceles. Sadly, no one had taught her how to transition from one to the other. I had to help her figure it out.

There is another stance you may see, call The Israeli Method. They assume a position with their feet wide part, crouch down deeply, and use an Isosceles upper body. It is also called the “horse riding stance, as it is the same position when aboard a horse. I would think it would work OK, provided you have enough room to spread your feet that wide. In the isle of a bus, in a travel trailer or motor home, even a crowded isle in a supermarket, you may not.

So, which stance should YOU use?

Why not? 99% of us go to a range, where the ground is nice and flat – perhaps even a concrete pad, carefully leveled, with all the rocks swept off. I have seen folks smooth out their firing position, sweeping aside any unevenness with their shoes. Then, we check that our compact pistol is loaded, cautiously assume our preferred stance, face a single target, and, making sure we do NOT move our feet, draw and fire.

How close is that to reality? NOT AT ALL! Plus, many of us cannot contort our bodies into the approved position. I, for one, cannot stay in the “horse riding” stance for more than a short time – even though I used to ride horses a lot!

What are the chances you will be on uneven rocky ground? Could you need to draw and present or even fire while moving towards cover? Could you be compelled by circumstances to fire uphill, or downhill? How about on a rainy or snowy day, with ice under the snow? What about if you are seated in your car when attacked at a stop light? How about when there are obstructions that prevent you from moving your feet to your well practiced position. In all these scenarios, can you still make fast hits on target?

I recall a conversation with a top ranked LAPD PPC Team shooter, who commented that he got into a shooting on a fire escape. With the outlaw about 10 feet away, this officer fired 6 shots from his revolver and scored zero hits. He had always fired on that nice, level range with paved firing points. He had never fired with his feet on different steps, at a sharp upward angle. Think it could never happen to you? NEVER say never!

What matters is your upper body – from the waist up. If you can get to your firearm, and bring it to bear on your attacker, you can make hits, even if your feet are sunk in the mud inches deep. Figure out what stance best fits your body shape, flexibility, and personal preference, and then practice shooting from that position. As you age, your body changes. Muscles may relax, tendons may tighten, and you may want to modify your preferred position. I have watched shooters fire from some truly unorthodox positions – and make fast hits. This falls under ITWDFI – If It Works, Don’t Fix It!

You should try all the various stances, but under realistic conditions. That means a humanoid target, not more than 7 yards away (closer if you can), wearing your street clothes, not your “range outfit.”

Also, play the “what if” game with an UNLOADED gun:

There is also the entire issue of use of cover. In some positions, you must expose about ½ of your body to use cover, which is not a good idea. I want to expose as little as possible, from either side. I taught myself the Reverse Weaver for just this reason. The Weaver as if I was a left handed shooter. Thus when cover was to my right, I do not expose much of my body.

While you are practicing, do some single handed practice with each hand. Among the many shooting reports I read, a significant portion of the good guys get shot in the hands/arms. The winners do not quit! They switch hands and continue to shoot back! It is better to learn those skills now, than to try to improvise in the middle of a gunfight. Consequently you can also figure out what stance you would take if forced to shoot with your weak hand! Survival is the ONLY victory!!