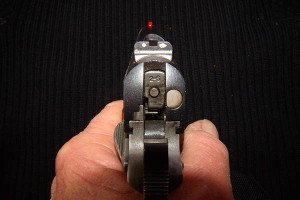 We all need to think about the actual process of shooting – how does a human manage to hold a mechanical device, a rifle, pistol, or shotgun, and arrange to deliver a projectile or projectiles at a distance with some degree of accuracy?

I’ll primarily discuss pistols as they are the most difficult to shoot, and are in almost all cases capable of mechanical accuracy beyond our abilities. That is, if we lock the firearm into a solid holder, they will shoot groups smaller than a human can routinely deliver. Even that 2” .38 Spl. Revolver can out-shoot most humans, if set up in a proper mechanical rest. But first, we must analyze different sight types.

To help us shoot accurately. we put various types of sights on our gun. These can be open (iron) sights, red dots, magnifying scopes, and lasers. Flinching, or the normal reaction to a sudden loud noise by our body, is a hard-wired primitive response. We adopted hearing protection to minimize this effect on the range, as well as to save our hearing. As we aim, the movement of the sights on the target is called the “wobble area,” or for some the Arc of Movement.

Shooting with a laser or scope displays one of the problems right away. We can not hold the gun rock steady, which is easily shown by the laser bouncing all over the target. Motion is proof of life, and our bodies are constantly in motion. We need to breathe, even as we try to fire in the respiratory pause, that brief interval between inhaling and exhaling. Our hearts pump, but experienced shooters can reduce their pulse and even learn to shoot between beats. Even so, we have great difficulty controlling the rest of our bodily functions. We have to adapt best we can.

Iron sights are the oldest, and still the most resistant to harm. They have no glass, no batteries, and they are mounted low on the gun. In many cases they are now made of polymer, and may have tritium capsules (for use in low light), but they are still called iron sights. They make us try to focus on three things – the rear sight, the front sight, and the target. The best compromise here has been to focus on the front sight, making the rear sight slightly fuzzy and the target fuzzy. Peep, or aperture rear sights, simplify the problem, as you naturally look through the center of a hole. This removes the rear sight from the focus problem. Fine accuracy is possible with iron sights, but they are the most difficult to master. A bright front sight makes fast hits easier.

The red dot sights allow much faster shooting, as the dot need not be centered in the sight window. But for real precision, the dot must be small, so it does not cover the target. When first using a red dot, most people have trouble both finding the dot, and keeping it relatively still on the target – it’s like trying to follow a bouncing ball! They are now very reliable, with battery life listed in years, not hours. They also range in price from $20 to hundreds, usually with quality matched to the price. Still they use both glass subject to breakage and batteries that will, eventually, die. Most folks with red dots on their rifles also have a pair of iron sights as backup. Some do the same with their pistols.

Lasers have their pluses and minuses as well. On the plus side, they allow you to make hits when you cannot see the sights in the dark, or when the firearm is held below eye level, as long as you can see the target. And some claim that they have a deterrent effect on outlaws, when they see the dot and expect a bullet impact if they do not modify their behavior. On the other hand, if there is dust or smoke in the air, the line of laser light shows the outlaw precisely where you are. Personally, I do not care for them, and do not own one. If you have one, make sure to practice with the laser off, as if it is broken (glass & batteries again), or the lens is obscured by clothing, dirt, mud, etc.

Magnifying sights (scopes), contrary to popular belief, do not allow us to shoot better! What they do is allow us to see better. Riflemen (and some pistol shooters) can see their target, but also the effect of their breathing. Look through a scope, and you see the reticle moving across the target. In prone with a sling, I see it move in a diagonal across the bullseye, the vertical caused by my breathing. The horizontal component a result of the pressure of the sling against my arm changing as the rifle moves up and down. Scopes are an aid to seeing, not shooting. They let us focus on one item – the reticle – rather than trying to focus on the rear sight, front sight, and target. Place the crosshairs on the target, press the trigger, and get a hit!

After 50+ years of study, I have concluded that we use the sights to align the centerline of the bore with the center of the target. In the process, we train our mind and body to work together, creating what is usually called muscle memory. Of course, muscles do not have memories, but it’s an easy way to describe the effect. For example, decades of practice with a pistol has conditioned me to close my left eye as I raise the pistol to a firing position. Yes, I understand why folks advocate keeping both eyes open, but I simply cannot overcome all those thousands and thousands of times I closed my left eye. It is the same thing with a rifle, no matter what kind of sights it has. I just am too conditioned to keeping my left eye closed.

In point of fact, we fire a shot only to confirm that the sights and the point of impact are aligned at the chosen distance. That is why dry (no ammo) fire is such a fine tool for training. I am fortunate to know National and World Champions in a number of different shooting sports. They all share one training tool: Dry Fire!

Continued in How Do We Shoot (Really How Do We Hit) – Part 2.