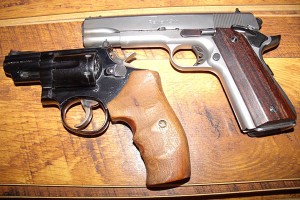 The Critical Importance of Grip

When I started shooting back in the dark ages, everyone “knew” that semi-automatic guns, both rifles and pistols, were not accurate unless refined by an (expensive) Master Gunsmith. Yeah, well, at one time we all “knew” the Earth was flat! The grips on a handgun and the stock on a rifle or shotgun are the “machine/human interface.” When they are right, the gun fits and you can hit your target almost without using the sights. Experienced shooters know that a close range – for me about 10 to 12 yards, they can shoot center hits with a handgun without use of the sights. Further back, they can use just the front sight, and beyond that, it’s both sights.

The Role of the Sights

Once the sights are aligned with the center of the bore, the gun is sighted in. Now it is time to get off the bench rest, and shoot as you will in the field, which my hunting friends say is about 80% standing, and 20% kneeling. In personal protection, it’s more like 95% standing, 5% behind vertical or horizontal cover, kneeling.

Staying with personal protection, the reality is most confrontations take place at 7 yards or less – about 50% at 5 FEET or less. At these distances, time is critical, thus the need to shoot fast is justified. Many trainers say if you can see your front sight on the attacker, shoot! Your shot will hit him someplace, buying you the time to fire more shots in the vital area. This is why you need to train on humanoid targets, at very close range, building up to fast shooting.

The sights create the memories so your muscles will respond while your mind is making the decision.

Over the years, I have found the 1911 frame best suits my needs/desires/abilities, and so these guns, and those that mimic the feel of a 1911, are the best choice for me both for competition and defense. I find that when wearing a 1911, I can draw and present (bring the gun up to eye level) with one hand or two. From there, I find the sights aligned on the center of the target I wish to hit if it is within reasonable range, currently about 15 yards. I can, with some refresher training, do the same with a Smith & Wesson revolver when outfitted with my choice of grips. In fact, when my agency required us to carry revolvers, I bought a pair of oversized wood grips to fit my service gun. Then I sat down with a wood rasp and a 1911, and cut away on those grips until they also felt like my 1911. You do what you have to do. The end result is not pretty, but it feels to most folks just like a 1911, giving me a semi-auto feel in a revolver.

Rifles have three points of contact, and they offer greater stability and thus accuracy at longer range than the hand held gun. Since I shoot a wide variety of rifles with different configurations, I need to quickly remind myself where my hands and head go. The difference between an AR, M1A, FAL, and bolt action are significant, but a few dry shoulderings gets everything lined up. A lack of practice shows when I try to release a magazine by pressing on the wrong spot, or neglect to move the safety off because it thought it was “here” when it is actually “over there.” It’s always entertaining for my pals.

I’m not much of a shotgunner, so I only shoot one, the Remington 870. But I am not used to using the safety behind the trigger, and I have been fooled a few times. This is why I have a shirt that says “I AM THE COMIC RELIEF!” In law enforcement, we carried our shotguns “cruiser ready” – chamber empty, hammer down, magazine loaded, safety off. This avoided negligent discharges while administratively handling the shotgun. But we still trained to press the safety off when preparing to fire. Never forget that you still need to point the shotgun, even in close range personal defense situations.

The Need for Perfect Practice

In short, practice allows us to pre-condition, to “train-in,” those things we can control. These are the draw, presentation, alignment of the bore with the target, and a trigger press without disturbing that alignment. Thus we can work in auto-mode, putting all our conscious thought into evaluating what the suspected attacker is actually doing. Is he creating a threat? Drawing a gun? Getting his cell phone? Pulling out a knife? Getting a slip of paper from an inside pocket? These actions require we direct all of our attention to his movements while we maintain the ability to react instantly once we decide what his/her actions mean.

Once again, we actually fire a shot to confirm that a controlled trigger press will not disturb the sights enough to cause a miss. Controlled does not mean slow, although they will be slow when we start. Slow shots are used to confirm that the sights are aligned with the spot we want to strike. The truth is, you cannot miss fast enough to win – in a match, or a gunfight. As our skill level increases, we start to shoot faster. One misconception is the need to fire small groups. In personal protection, there is only the need to keep all shots in the vital zone – which on a human is about 81/2 x 11 inches. So, ordinary printer paper gives us a good basic target. If you are shooting small groups, you need to shoot faster. How much time will you have? Only the rest of your life.

So what? This means that in a defensive situation, and I have been in a few, I can focus my conscious mind on the situation. I can see what my opponent is doing, and change my actions faster than he/she can. This is called getting inside his OODA loop, his decision cycle, and usually results in winning. My subconscious can keep my firearm aimed in the area I want to hit, if I decide shots are the best response to protect myself or others. So far, my verbal and non-verbal communication skills have prevented any need for me to shoot.

The OODA loop was a description of how people make decisions, presented by Colonel John Boyd, USAF. It stands for Observe, Orient, Decide, and Act, and it is a complex decision making process now used widely in both the military and business management. It really requires a much longer article to define, but it is a winning strategy. Obviously, the less you have to think about while under stress, the faster you can make decisions. So removing the need to think about aligning the sights speeds up your decision process.

Personally, I find that I can draw at speed and find the sights (centerline of the bore) aligned in the center of the target out to about 10-12 yards. Beyond that distance, I need to start focusing on the front sight. The greater the distance, the greater I need to focus. Thus I know that beyond about 12 yards, I need to be moving faster toward cover, or taking other action that may disrupt the attackers’ plans (known as getting inside his OODA/decision loop).

The elements we can control need to be a reaction to a perception that things are not right. I have found that, based on my background, training, and experience, I take a series of actions:

THIS IS AN ATTACK – Fire at the center of available mass until the threat is neutralized. Not two shots and assess, but make hits until he/she/it is no longer a threat.