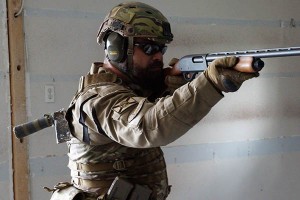 With all the talk about gun control, terrorism and home defense going on in the world media today, now more than ever, people are taking a stand for their own protection. With that being said, I thought it was time to take a look at one of the most popular and widely acceptable firearms allowed for both Military, Police and civilians alike to combat today’s evil, the model 870 by Remington Arms. This simple to operate, pump action shotgun is almost 65 years old and yet still sees more military, sporting and police use on a daily basis than any other manufacturer and model in the world! This month, we are going to break down the tried and true Remington 870 Shotgun and find out just why it’s still so popular.

Birth of a Legend

Created in 1951 by the engineers at Remington Arms Company, LLC, the model 870 was to be only the fourth pump shotgun design for the company following the decent success of the earlier models 10, 17 and 31. At the time, Winchester’s model 12 was slowly taking over the pump action shotgun market with a lighter, more stream lined design. The model 870 would take the best features of its predecessors and create a stronger, more rugged and reliable shotgun. Originally offered in 12, 16, 20 and 28 gauge as well as .410 bore, sales of the model 870 immediately took off with hunters looking for a reliable, heavy duty shotgun for large game such as deer and boar while still being lightweight enough to shoot dove and quail in the off season. As the skeet and trap competitions around the United States started to grow in the early 1960s, yet another segment of society discovered the benefits of the 870’s new design. When the Vietnam Conflict escalated and 18 year old young men were being ushered off to war, the US military decided to arm their close quarter combatants with a shotgun most of them were very familiar with by issuing the Remington 870 along with their standard battle rifles.

By the time the United States withdrew its forces from Vietnam in 1975, the Remington 870 pump shotgun was a battle proven firearm with a strong following from veterans and military enthusiasts alike. A lot of veterans returned home with direct combat experience and first-hand knowledge of gun fighting skills. A good number of these seasoned gunfighters decided to continue their service to their country by going into law enforcement during the late 70’s and early 80’s. When looking for extra firepower to supplement their six shot service revolvers, the 870 was widely accepted as a trusted friend during a time most Police, Sheriff and Federal departments were either creating or updating ancient policies and training manuals to reflect what they had learned during their war time experience.

When I entered law enforcement during the turning of the new Millennium in early 2000, I was fortunate enough to serve under the leadership of one such Vietnam veteran, Sgt. Curtis Pittman during my rookie year. Having grown up using the 870 and its semi auto counterpart, the Remington 1100, I had always just considered both to only be sporting guns. As a new Deputy Sheriff, I would be assigned a Glock Model 21 .45 ACP pistol and a 12 gauge Remington 870 Remington Express Police Magnum pump action shotgun just as new as I was. Sgt. Pittman was not only my patrol squad leader; he was also the department firearms instructor and later my direct commander as a Lieutenant when I was assigned to the SWAT team.

Seeing my initial disdain for the simple 18 inch barrel shotgun, Sgt. Pittman was “kind enough” to help me with that situation. Over countless hours of close quarter combat training both within the department and traveling to train with other great instructors across the state, I shot hundreds of slug and buck shot loads during static and movement drills during my first few years in law enforcement. The end result was me becoming very aware of just what an awesome force a combat shotgun such as the Remington 870 could be in a tactical situation. While my shoulder wasn’t too happy on a regular basis, my growing mental tool box was forever grateful. 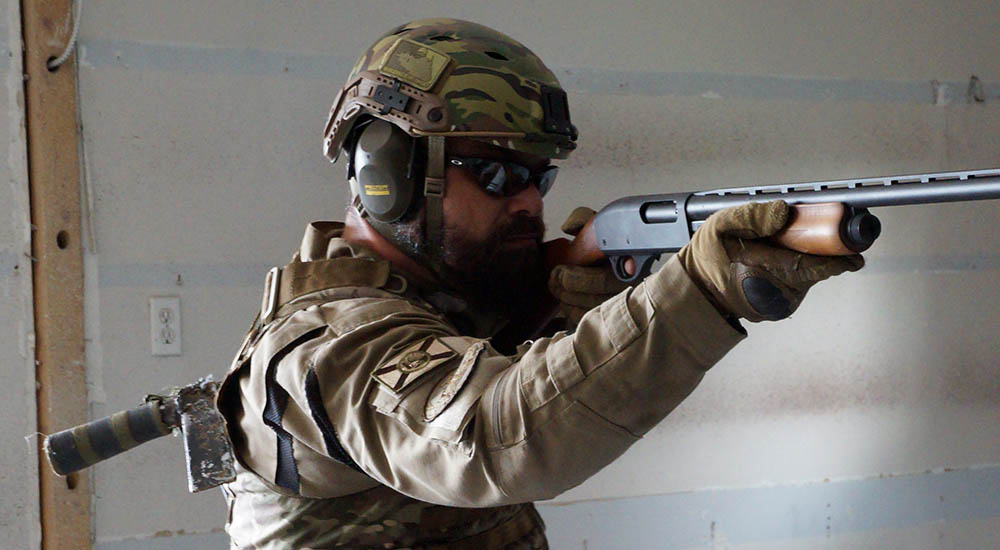 The Remington 870 shotgun owes part of its longevity to the fact it literally offers something for every shooter in the form of various configurations Remington catalogues. The base design is simply a bottom loading receiver with a manual action manipulated via a handguard mounted action bar. By either firing the firearm to disengage the locked action or manipulating the release manually through the use of a flat bolt release mounted just forward of the trigger guard, the shotgun can be quickly cycled for extremely fast follow up shots. While some initially find the location of this action lock release to be awkward to use, it is keenly located to prevent accidental discharge during cycling. Due to the cycling relying on a manual action rather than a gas or piston action, a much wider array of munitions may be used from less lethal bean bag and rubber pellet rounds to full 00 Buckshot loads.

Constructed with a tubular magazine tube located directly under the barrel, the design allows for very smooth feeding without any issues. The standard magazine tube for sporting purposes uses a 4 + 1 capacity while the more tactical military and police versions come equipped with a longer, full length 7 + 1 tube.

Barrel lengths vary from the standard civilian legal 18 inch barrel preferred by average law enforcement patrol officers with the shoguns mounted in their cruisers to the pheasant and goose hunters’ 30 inch favorite. Specially trained operators such as SWAT and elite military forces often use an 11 inch or 14 inch barrel for extreme close quarter operations such as ships, houses or to defeat door locks and hinges. With an empty weight of approximately 7 lbs, the model 870 is lightweight enough to be carried all day by the military troop and hunter alike with reasonable ease.

Sights for the 870 shotgun platform are offered in yet another wide variety of options and model variants direct from the factory. When shopping for an 870, the buyer can choose a traditional single beaded sight, double beaded sights often preferred by wing shooters, rifle sights for the slug shooter and ghost ring tactical sights offering a fast and very durable combat option direct from Remington. Aside from factory options, there are almost just as many aftermarket options to choose from as well consisting of night sights, fiber optic sights, thumbhole and collapsible stocks, matte, parkerized and Cerakote finishes and more!

Remington in the Field

Currently, I own a Remington 870 Express chambered in 20 gauge with a 26 inch barrel for small game hunting such as squirrels, rabbits and the occasional trash diving raccoon. With just a simple single bead sight and a cheaply manufactured wood stock set, my shotgun is as bare bones basic as Remington offers with nothing fancy added. For the purposes it currently serves, I wouldn’t have it any other way. This 870 has become a great teaching tool for my wife, Candace to learn the fundamentals of shotgun shooting with. The smaller gauge recoil and smooth action allow for her smaller stature to retain complete control over the firearm during rapid fire situations such as skeet and trap shooting. I plan on using this same shotgun in the near future when my children are old enough to learn the responsibilities and fun of shooting sports. 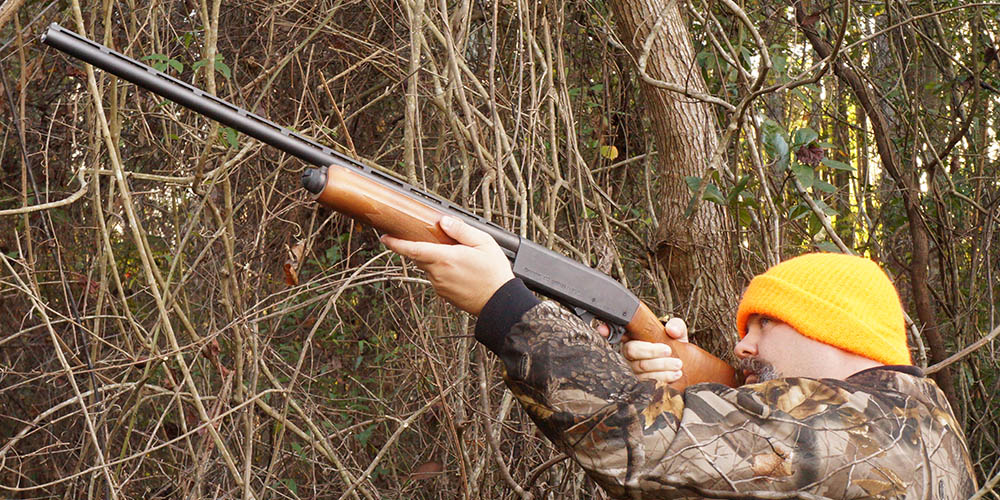 One of the great joys of doing firearm features is the opportunity I have to discuss article ideas and gun topics with a great group of field researchers such as myself and industry experts on a regular basis. With the 870, I decided to speak with a few of these very people who have just as much or even more intimate experience with the Remington 870. Swanson Media Group senior outdoor writer, Craig Reinolds, a retired fireman, former police officer and US Navy veteran as well, provided input on the wide range of uses his personal 870 has provided over the years. Through stories about hunting with his sons and carrying his Remington pump professionally during high risk situations; Craig gave the old 870 design high praises on its performance decade after decade. Bird Shot, Buck Shot and rifled slugs have filled years of Craig’s experience in the field. 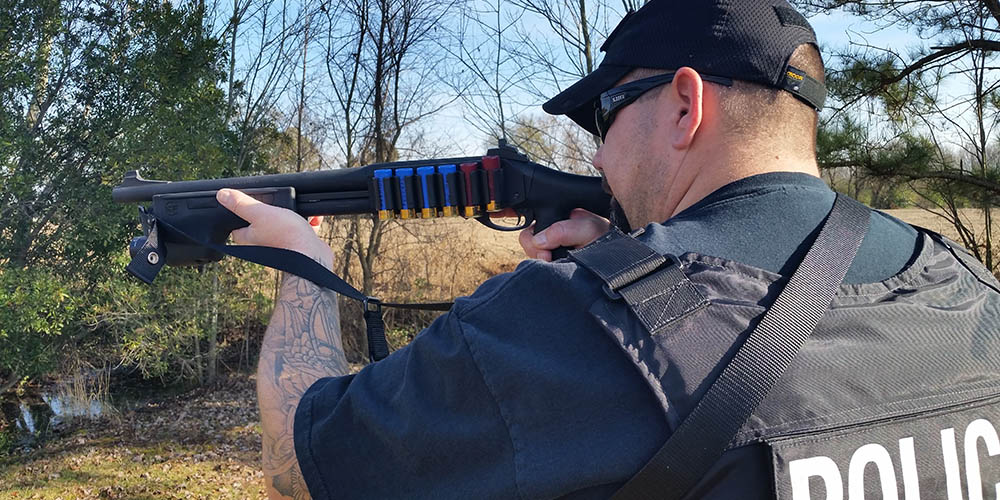 Rodrigo Muller, another one of the Swanson Media Group’s fantastic writers, has a background consisting of being one of Brazil’s top firearms and tactics instructors and now head of Muller Consulting. This is a tactical group recently relocated here to the United States with the goal of training Federal, State, and local law enforcement as well as civilians. Aside from magazine articles, Muller has written several books including one on breaching using both the 870 Remington shotgun as well as explosives. Special munitions such as less than lethal and breaching rounds have been a hallmark of Rodrigo Muller’s training with the 870 that I am allowed to divulge. 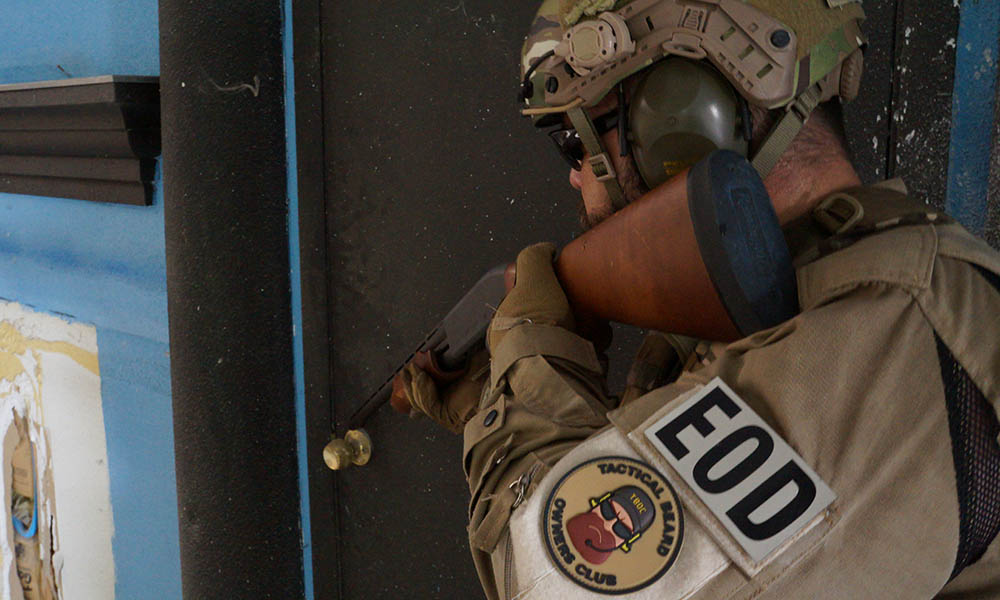 Another good friend and yet another fellow Swanson Media Group writer, Clint Steele was happy to provide his experiences with the Remington 870 as well. As a proud veteran of both the U.S. Marine Corps and U.S. Army (Ret.), Clint had formal training on the 870 platform during support missions to evacuate foreign U.S. embassies in war zones. Prior to that, Clint recalled fond memories of growing up hunting in Michigan. Due to state hunting laws, rifles were not allowed for large game hunting so the 870 pump shotgun was standard equipment for him and his family. As you can see from the accompanying video segment in which Clint lends a hand on the range field testing, he and the 870 are still a smooth operating combination!

Finally, I reached out to a former SWAT teammate of mine, Chad Roeder, who is a former US Marine and now a current Alcohol Law Enforcement agent for Pitt County, North Carolina. Like the rest of us, Chad’s experience with the 870 started in his early years as a boy learning to hunt, but his combat skills developed during his time serving in the U.S. Marine Corps with a military version of the shotgun as a supplement to the standard issue M4 / M16. Like many veterans before him, Chad was able to take those skills with him into a successful career in Law Enforcement beginning with my former SWAT unit before moving on to better opportunities. Roeder conducts high risk search warrants and seizures regularly with his specialized 14 inch barrel 870 close in hand. As a proud father, Chad uses the 870 shotgun in his off time to pass the time honored tradition along in teaching his children. 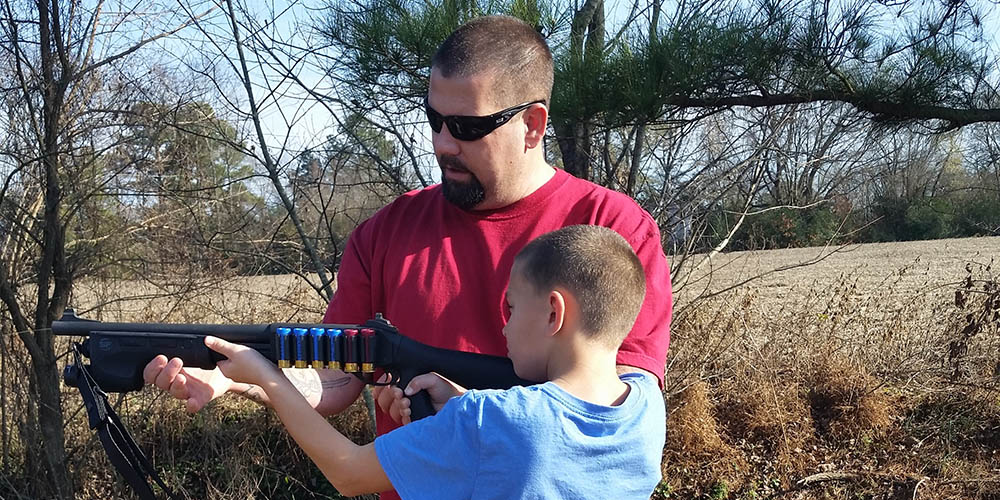 Final Thoughts On The Remington 870

Combined, there is over well over 160 years of field use and great stories among the focus group of gentlemen, who I am very proud to call my brothers in arms. While our stories may all be different, in the end, we all share the same faith and trust in the Remington 870 to do its job safe and effectively regardless of the type munition we use. The important thing to note is that these shotguns are trusted not to just take game, but to defend lives both foreign and domestic. That’s a huge honor to bestow on any company or product, so the Remington 870 is not taken lightly within the firearms industry.

Retailing for around $400, the Model 870 remains still to date remains a very popular, economical and effective firearm choice around the world with sales recently surpassing 11 million units sold. Countries such as Canada, the UK, Germany and Israel follow in the United States example of deploying the Remington 870 shotgun in both their military as well as police forces. Bottom line, the 65 year old design is still serving all walks of life today because it’s cheap, reliable and does its job well every time! What more could you ask for? To find out more about the Model 870 and the rest of Remington’s great line up of firearms, check out www.1800GunsAndAmmo.com to see their wide range of Remington products and discover which one is right for you. Until next week, Train Hard and Continue the Fight!!