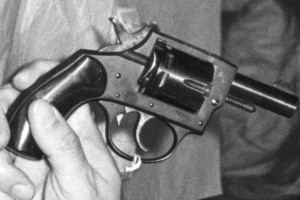 The author was an ATF Agent during the late 70’s early 80’s.

Adam Winkle a professor at UCLA School of Law, wrote in Gunfight:  The Battle of the Right to Bear Arms in America, that Franklin D. Roosevelt was the father of gun control.  If it hadn’t been for Al Capone and Bonnie and Clyde, regulations of firearms would have remained a matter of state law.  But with “Prohibition – era gangsters and traveling desperadoes” state lines interfered with capture and tremendous pressure during the 1920s and 30s, forced FDR’s New Deal for Crime.  This began the introduction of the role of the federal government into crime fighting.

FDR’s original proposal became the National Firearms Act of 1934.  It sought to tax all firearms and establish a National Registry of Firearms.  However, gun owners objected and Congress scaled it down to allow for taxes on machine guns and sawed-off shotguns only.  These firearms were called the gangster weapons with “no usefulness for self-defense.”  Since FDR, politicians have continued the fight for National Registration of Firearms under each new administration.

President Lyndon Johnson’s “Great Society” program began the push through Congress of a national registration of firearms to provide “security for Americans.”  President Johnson felt this could only be accomplished at the hands of the federal government.  The push was the culmination of three successful assassinations during the turmoil of the 1960s.

On November 22, 1963, Lee Harvey Oswald assassinated President John F. Kennedy.  In March 1963, Oswald purchased by mail order an Italian Military Rifle, the 6.5x52mm Carcano Model 91/38 (Mannlicker-Carcano) rifle with a telescopic sight.  He also purchased a .38 Smith & Wesson M10 revolver from a different company, by the same method.  He used alias’ for these purchases.

Lee Harvey Oswald had troubles as a youngster and during his military service.  After the military, in 1959 he defected to the Soviet Union surrendered his passport to the Russians, but did not denounce his citizenship.  In 1962 upon realizing the Soviet Union was not his ideal society, he requested the return of his passport and returned to the United States.  Lee Harvey Oswald was a communist and supportive of Cuba.

On April 4, 1968, James Earl Ray assassinated Dr. Martin Luther King Jr.  On March 30, 1968, Ray bought a Remington Model 760 Gamemaster .30-06 caliber rifle and a box of 20 cartridges.  Both were purchased from the Aeromarine Supply Company in Birmingham, Alabama.  He also purchased a Redfield 2x-7x scope.  He used an alias when he made the purchases and had facial reconstruction to alter his appearance to avoid detection.

On June 5, 1968 Sirhan Sirhan assassinated Robert F. Kennedy.  Sirhan used a .22 Iver-Johnson Cadet Revolver.  Information was not available as to how or where Sirhan obtained this firearm.

Sirhan Sirhan emigrated with his family to the United States when he was 12 years old, but never became an American Citizen.  He was a Palestinian w/Jordanian Citizenship.  He was upset by the Arab/Israeli issues of the time and Robert F. Kennedy’s support of Israel.

President Johnson pleaded with Congress “in the name of sanity . . . in the name of safety and in the name of an aroused nation to give America the gun-control law it needs.”  These three assassinations, urban riots and polls that showed that approximately 80 percent of Americans favored gun registration laws encouraged President Johnson to propose and Congress to pass on October 22, 1968 the Gun Control Act of 1968, 18 U.S.C. 921 et.seq.  Once more national gun registration was included in the Act but was dropped to assure the Acts’ passage in congress.

Enacted pursuant to Congress’s constitutional authority to regulate interstate commerce, the legislation had three major features.
1. It prohibited interstate traffic in firearms and ammunition.
2. It denied guns to specific classes of individuals such as felons, minors, fugitives, drug addicts and the mentally ill.  (thus, the Form 4473)
3. It prohibited the importation of surplus military weapons in the US as well as guns and ammunition not federally certified as sporting weapons or souvenirs.

With the tumultuous events of the 60′, both in the race riots and the assassinations, the government development the ATF Form 4473.

The form which is filled out by the purchaser of a firearm, contains in Section A standard questions (10 in number) for identification.  Question 11.a. through Question 15 establish whether you are a prohibited person and not permitted to purchase a firearm.  The firearms dealer must be a Federally Licensed Dealer and provide this form with each firearms sale.  The dealer has his/her own portion of the form to fill-out.  Once filled out, the form remains the property of the dealer and must remain at the place of business.  The only time the form is reviewed is if ATF conducts a firearms trace and needs to locate the owner of that firearm.  The completed 4473s are only sent to Washington D.C. when the dealer closes his business or surrenders his license.

Form 4473 has been in existence for 49 years.  It has undergone minor changes throughout the years until a major change in October 2016, which was necessary to address changes in state laws concerning marijuana usage.

Question #11. e. “Are you an unlawful user of, or addicted to, marijuana or any depressant, stimulant, narcotic drug or any other controlled substance?” (Warning:  The use or possession of marijuana remains unlawful under Federal law regardless of whether it has been legalized or decriminalized for medicinal or recreational purposes in the state where you reside.)

Persons that may have previously been able to purchase firearms are now prohibited because of their marijuana consumption.  Just because your state law gives you freedom to smoke “pot” for medicinal or recreational reasons, you’re prohibited from buying a firearm by Federal Law.

On a personal note, the form fails to keep certain persons from obtaining firearms.  This failure is seen in Question 11.f.

Question 11.f.  Have you ever been adjudicated mentally defective (which includes a determination by a court, board, commission, or other lawful authority that you are a danger to yourself or to others or are incompetent to manage your own affairs) OR have you ever been committed to a mental institution?

In the 1970’s and 80’s society forced the closing of many State Mental Hospitals and the mainstreaming of mentally ill and mentally defective persons into society.  It was done in the name of fairness to the mentally ill and defective persons, to ensure their self-esteem was not affected.  Mentally ill and mentally defective persons were no longer entering the court system.  They were being diverted away from the courts and back into society.  Therefore, they were never adjudicated a mental defective and receiving the help they needed in a controlled environment.  They were and continue to be released into society to get their own counseling and monitor their own drug intake.  Such a person can legally buy a firearm.  So, when you hear the media or people in general complain about mentally ill or defective people buying firearms, it’s not the FFL’s fault, nor the form’s fault, it’s the fault of society.

There are two things that we can do to assure that the strengths of this form are being implemented.  We must educate society of the need to return to a time when the mentally ill/defective were adjudicated.  This would prevent them from obtaining firearms.  Also, we must insist through our legislators, that ATF enforce the law and bring to justice those that falsify the form.  Firearm violations on the 4473 should not be used in plea bargaining or overlooked because it’s a small paper crime.  This appears at the top of the Form 4473, before you even begin to fill in the blanks:

“WARNING:  You may not receive a firearm if prohibited by Federal or State law.  The information you provide will be used to determine whether you are prohibited under law from receiving a firearm.  Certain violations of the Gun Control Act, 18 U.S.C., 921 et.seq., are punishable by up to 10 years imprisonment and/or up to a $250,000 fine.”

If you’re not going to enforce the law then remove this warning.  As Benjamin Franklin said, “Laws without enforcement are just advice.”