Skip to content
blog.GritrSports.com > How to Guides > How To Sell A Handgun To A Woman – Part 1
How to Guides 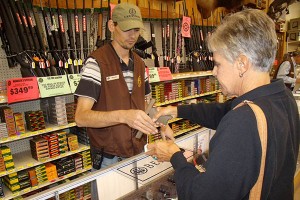 Communicate to grab her interest.

Recently I purchased a Queen Size Mattress Set and the customer service I received “blew the competition away.”  The shooting industry is based also on customer service and all media outlets are full of advice on how to sell firearms from the point of view of the folks behind the counter.  It’s important to move to the other side of the counter and put yourself in the shoes of the customer.

The media continues to vilify the instrument and some women believe it is a living, breathing method of destruction.  One touch and it will go off and kill someone.  So, imagine visiting a gun store that looks like this.  It can be quite intimidating. 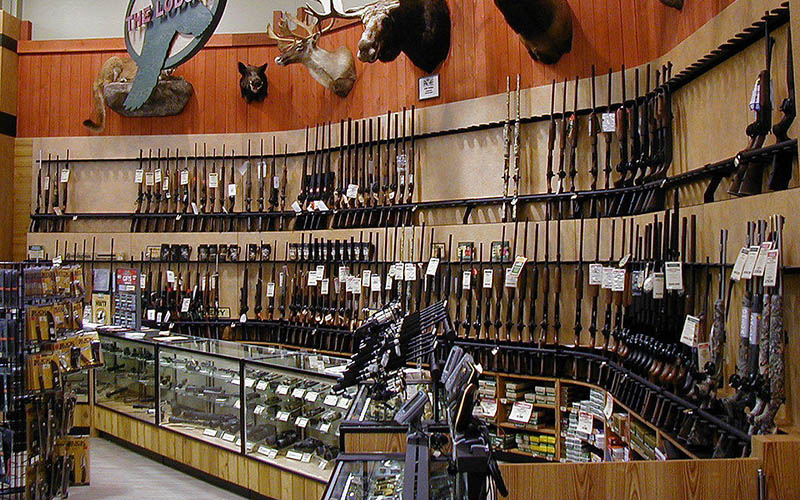 I instruct women in handguns and it includes a visit to gun stores to research and purchase.  I’ve seen the good, the bad and the ugly of how salesmen try to sell handguns to women.  The secret to grabbing the women’s interest and subsequently a sale is to understand what interests the women, particularly in an area women haven’t been socialized into.  How can you select a handgun if you’ve never held one, never fired one and perhaps never physically been in the same room with one?

If a woman comes to your counter and looks like a deer caught in the headlights, she sees a mountain of handguns before her and is overwhelmed.  The best way to break the ice is to acknowledge her presence, introduce yourself and ask her how you can help her.  The first thing she’ll probably do is tell you that she has no idea what she wants, as she’s in the “kicking tire” stage.

Inquire as to her level of knowledge.  If she has none, referring her to some firearms instruction, is the best.  Tell her that she needs to try a few handguns before she buys.  If you have an instructor in the area whom you trust to treat her well, refer her and advise her to return to see you after her training.  She’ll be impressed that you’re not trying to sell her something prematurely, because if she doesn’t like it she’ll have to return or trade it in.  She’ll visits your competition, particularly if you don’t take returns or trade-ins.

If she has no prior training and chooses to purchase without any formalized instruction, expect to spend some time with basic education of the different types of handguns.  Be patient as this is a new world for her.  She may not immediately buy from you, but will remember your patience and your assistance and tell others.  If you use jargon of the firearms industry, without a dictionary to explain the meaning, it sounds like gibberish to some women.  You’ll lose her instantly and she’ll move on to someone else.  She’s not stupid but is out of her comfort zone.  How you communicate with the women at your gun store determines whether she’ll buy from you or move on to your competitor.

If she has training and knows what she wants, don’t try to divert her to the monthly special (unless it’s her choice) or your favorite pistol (unless it’s also her choice) or fancy extras (unless she’s experienced and competent with the basics). She’ll be wary if you’re spending time on all the extras as she’s watching the cost elevate and is aware of what her budget will tolerate.  Listen to what she likes and dislikes.  If she likes you and your customer service and she’s comfortable with what you’ve shown her, she’ll buy.

While visiting a local gun store with several of my students, the salesman was impressed with himself.  He proceeded to entertain everyone at the counter with his dexterity at handling semi-automatics.  Between loudly removing and reinserting the magazine, and releasing the slide to create that well-known sound of a slide slamming home, it was done in a magician-like fashion, smooth and quick.  The slickness of the handling of the pistol and the sound emitted was his method of grabbing the women’s interest.  I watched the women jump each time they heard the slamming of steel on steel.

At another store, a salesman just handed the handgun to a woman and walked away.  That same salesman on another occasion had his sales opportunity highjacked by the husband.  His wife was looking for a handgun and the husband kept directing his wife to choose what he wanted her to have.

Besides the salesman interaction with the customer, you have to avoid those “tacticool” shops where the salesman acts as if the customer is a threat and must be ready to draw on them at any second.  Next up are the shops that are stuck in the “50’s.”  The salesman directs the women to the “small, light and pink” .25s, .32s or the .380s.  This is the belief that all the women are “Leave It to Beaver’s” mother, walking around in heels and pearls and too weak to handle anything larger, heavier and perhaps black.

The best gun stores are those that diligently train their staff to accept the woman as customers, of equal merit with the men.  Your sales staff needs to listen to the language the woman uses.  If the woman knows the difference between a bullet and a cartridge, and between the handle and the grip, she has had some training.  She may not know every bit of jargon about handguns but please, respond in kind.  Be ready to explain if your comment gets a quizzical look, or move on if she nods knowingly.  Steer her toward what she likes, not what you like or what the store wishes you to push that month.

Telling a woman that if she doesn’t buy a certain pistol “she will die,” is a definite turnoff.  Telling a woman that a .45 automatic is “Bone-Crushing” and not appropriate for a woman indicates that you think women are weak.  Both will turn a woman away and send her to your competition.  If you’re fortunate enough to have a saleswoman at the gun counter she’ll be a valuable asset.

Communication is not that difficult.  Listening is difficult.  If you want to make the sale, become that salesman that everybody raves about and customers will return to buy from you again.  Grab her interest and she’ll be a loyal customer.