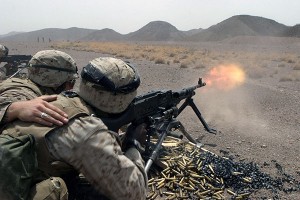 The “’Devil’s Paintbrush” has been a mainstay of modern military small arms since the machine gun first earned that moniker during the First World War. In the course of a few short, bloody years, machine guns uprooted many tactical principles, many of which had stood for a millennium before, and they represent the pinnacle of Industrial Revolution effect on military thought.

“Emma Gee” was born out of the artillery corps and first served as an emplaced support weapon. The heavy water-cooled Maxim is a classic example of the breed. Realizing the weapon’s value, designers wanted to put the fast-firing capability into more mobile packages. Results yielded magazine-fed light machine guns, automatic rifles and pistol-bullet spewing submachine guns.

All these designs fulfilled useful tactical roles. The Light Machine Gun and Automatic Rifle could be handled effectively by one rifleman, shot as far or further than a rifle, and still maneuver with the rest of the squad. If limited to closer ranges, especially urban or jungle environments, the submachine gun offered a similar firepower boost in a smaller, handier weapon. Properly employed with 2-3 round bursts these weapons increased the volume of effective fire available to mobile ground pounders. However, neither of them could offer the sustained fire and tactical advantage of a true machine gun.

Laden with water jackets, hoses and condenser cans the machine gun remained in defilade until the break though: quick-change barrel systems. Now the weapon could be as nimble as a light machine gun while still providing the tripod stability and sustained fire ability of the water cooled MGs. The General Purpose Machine Gun was born.

The Germans are credited with one of the first designs of this concept, namely the MG34, but they hardly perfected it. Years of fielding and practical experience allowed designers to improve on the human engineering. The next evolution of the design came in the late 1950’s and remains the epitome of the GPMG genre.

Fabrique Nationale Mitrailleuse d’Appui General, (general purpose machine gun, or GPMG) was designed by FN engineer Ernest Vervier and has been in production since 1958, hence the name FN MAG 58. Prior to this Mr. Vervier also assisted with the design of the Belgian company’s most venerable designs, such as the Fusil Automatique Léger (Light Automatic Rifle) or FAL rifle, and the Minimi (known as the M249 to US troops) in 5.56, but there is a newer version available in 7.62.

Fabrique Nationale is a subsidiary of the Herstal group, as is U.S. Repeating Arms (Winchester) and Browning Arms. The combined patent rights to the large number of famous and effective designs of these three companies is impressive. An even better indication of effectiveness is the number of countries that have adopted a given design. FN’s MAG 58 has been in use with the militaries of over 80 countries world wide. The British Forces’ L7, more commonly known by troops as ‘Gimpy’, is a license built version has been in service for over three decades and remains their main machine gun. It is used for fire support and is mounted on most British Army Vehicles, from light utility vehicles to main battle tanks, and will remain there for at least a decade more.

In Iraq, our 240s were the weapons we came to rely on most. They were the workhorse of the war.”
– SGT Charles “Chuck” Pruitt, Third Infantry Division

Gimpy is well liked by the troops who have used it and is regarded as one of the best 7.62mm GPMGs in the world. The tested reliability stands at an amazing 26,000 Mean Rounds Between Failure (MRBF). Following extensive operational and technical tests for a new 7.62 mm coaxial machine gun the US military realized this and adopted the MAG 58 as the M240. Production of the US variants are produced in the States by FN Manufacturing, an American subsidiary of FN Herstal.

Our Department of Defense maintains a number of different variants of the M240. The main ground variants for infantry use (tripod mounted or bipod supported) are the M240G and M240B (Marine Corps and Army, respectively) which replaced the M60 series. Other versions include the M240 and M240C (coaxial models for armored vehicles), 240D and 240H (spade gripped helicopter models with emergency egress package for ground use), and 240E and 240N (pintle mounted on ground and water vehicles.)

The action is a direct descendant of the time-proven M1918 Browning Automatic Rifle, upgraded as a cost-reduced design that requires a minimum amount of machined parts. It is a long stroke gas operated, air cooled, fixed head space weapon firing from the open bolt (bolt remains to the rear when the trigger is release to promote cooling.) Except for the M240C variant, most models feed the ammunition belt from the left side.

Despite being on older design than the M60, the FN MAG incorporates better human engineering. Let’s start with loading. The M60 must be loaded with the bolt locked to the rear and fully ready, what the US Army currently calls Condition Red. On the MAG the feed roller cam, which sits atop the bolt assembly and actuates the feed lever and pawls in the top cover, is spring loaded and allows the cover to be closed with the bolt in either position. The gunner can keep a belt of ammunition ready on the feed tray with the bolt forward, also known as Condition Amber. Just like carrying a rifle or pistol with a full magazine and empty chamber, a quick tug of the cocking handle makes the weapon ready. On a long patrol, bouncing on a vehicle pedestal mount, or in the hands of a less-than-expert gunner an alternative readiness condition may be warranted. The FN’s MGs work well either way.

The barrel and release are attached with the carrying handle. Depressing the barrel locking latch on the left side of the receiver unlocks the release and the carrying handle allows removal and control of the hot barrel during a change, alleviating the necessity of wearing a heat-resistant mitt. The bipod is connected to the receiver, not the barrel, allowing a gunner to remain in bipod-supported position while the assistant gunner does the swap.

The gas system is adjustable. This is not intended to offer variable cyclic rates of fire, rather, it allows the gunner to make adjustments and increase gas flow overcoming sluggish operation under adverse conditions. The intended rate of fire is 650 rounds per minute. Left unchecked the rate of fire can go up to 950 rounds per minute but this foolishly causes accelerated wear. The Bravo and November models have a hydraulic buffer inside buttstock to maintain steadier rate of fire (600-650 rpm) regardless of gas setting.

The MAG 58 has a long, distinguished career and has earned its reputation as a rugged, dependable, intelligently designed example of the General Purpose Machine Gun concept. It provides the heavy volume of close and sustained fire needed to accomplish the mission. In M240-series trim this workhorse is a welcome member to America’s arsenal.

Assault Packs (Rambo had it wrong)

In order to maintain sustained fire, linked belts of ammunition are a necessity. Magazines have an annoying tendency to empty quickly in full auto. On a vehicle or in a fixed position belts can be layered out or ammo can be fed straight from the can. When moving on foot this is cumbersome.

The romanticized image of a lone gunner, shooting one handed, ammo belt draped over the support arm and strapped across the torso Bandito-style is the result of Hollywood penmanship hallucinated by someone who has never handled a machine gun. On planet Earth ammo belts are a hassle to deal with and at least a bipod or pintle is needed for support. There is a pile of heavy gear needed and the gun is but one part of the equation. Effective gunnery requires a crew to be successful. However, even with help from an assistant gunner and ammo bearer, gunners need something immediately available.

One solution is to start the gun with a “teaser” belt offering the gunner a few immediately-available bursts while the assistant gunner preps a full belt. In order to be manageable this must be kept very short (about 25 rounds.)

Better still is a bandoleer. Easiest to use is a metal hanger that holds the issue cotton and cardboard packaging. More convenient to carry is an assault pack with a flexible pouch holding 50 to 100 rounds. An alternative is an ammo pack worn by the gunner instead of on the gun. This will bear more ammo more handily, but requires the top portion of the belt to stream out to the gun

This helps with the ammunition issue. With the MG fed the other issues are enough ballistic and math skills to understand Characteristics and Classes of fire, angular deviation (mils) and other critical but rarely discussed facets of good gunnery. But we’ll save that for another article.