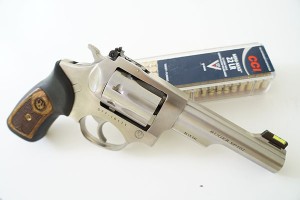 For both versions of the SP101, the upgrades for the new model clearly show Ruger listens to their customers. The traditional black plastic panel grips were replaced with one piece rubber grips with beautiful rosewood inserts bearing the Ruger logo. This offered a more comfortable grip and fuller feel to the shooter’s hand. The sights were completely changed for the better as well. The rear U shaped notch of the original model was replaced with a fully adjustable rear sight, while the simple front post sight was changed to a ramped unit containing a bright green fiber optic by the Hi-Vis company. This change, above any others, made this new model worth the revamp. Despite the upgrades, the SP101 managed to maintain its favored heft while still reducing the overall weight to about 30 oz. One look at this revolver’s redesign, it is obvious Ruger built the SP101 for folks who love to shoot.

When I received the test sample SP101 revolvers chambered in .22 LR and .357 Mag arrived on loan from Ruger, they were each packaged in the traditional gray Ruger embossed cases and an assortment of warnings, instructions and locks included to “lawyer proof” the company during shipping. As soon as I took each revolver out of their boxes, I could feel the quality and famous heft of knowing you have the classic Ruger strength in a steel gun. The cylinder to barrel lock up was tight with a crisp cylinder release and smooth ejection rod for quick and smooth reloading on both revolvers. Both pistols felt almost exactly the same to the extent if I closed my eyes while handling them, I would have a very hard time telling the difference between the two. 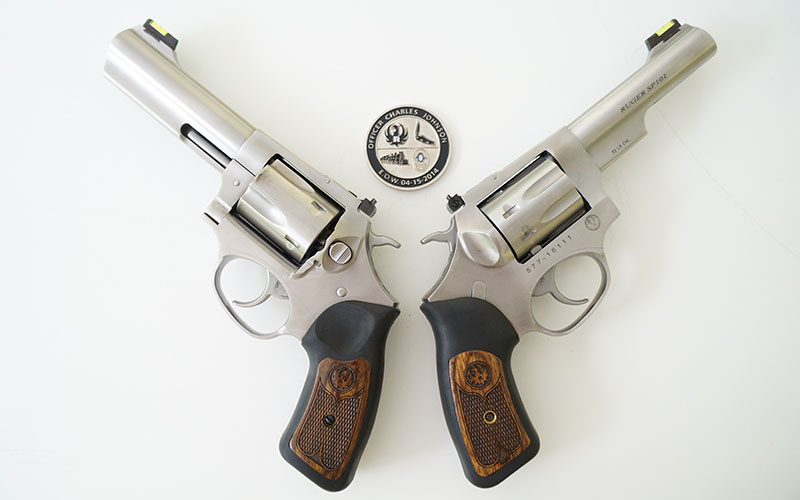 Moving into the shooting position, each pistol balanced very well and stayed steady as I held my arm extended admiring the natural point of aim. Immediately, the bright green Hi-Viz sight popped into my view getting my attention. I felt assured it would be easily found while shooting in low light or on a quick snap shot. Its 4.2 inch barrel seemed to be just the right length for comfortable carry in the field hiking or fishing. The revolvers were approximately 9.1 inches long overall, fitting into most common sporting holsters. The only physical difference in appearance I immediately noticed was the full lug of the .357 Mag compared to the half lug of the .22 LR. Due to the extra material taken out of the frame and barrel to accommodate the larger bore of the .357, the longer under lug helped keep both revolvers stay very close in overall weight. I was very impressed with brushed stainless steel finish matched with the rich rosewood Ruger logo inserts giving the revolvers an almost heirloom quality similar to what I knew of the 1980’s model Colt revolvers.

For testing purposes, I choose CCI Velocitor HP 40 grain ammo for the .22 LR revolver. Out of all the ammunition I have used recently in various handgun reviews, the Velocitor rounds have been the most consistent in shot placement. For the SP101 in .357 Mag, I went with a mixed assortment of .38 SPL +P 158 grain soft cast lead and .357 Mag 158 grain full metal jacket both from the great folks at Buffalo Bore. In addition to these rounds, I included the very popular .357 Mag 125 grain jacketed hollow point self-defense ammo from Hornady’s Critical Defense series. After setting up paper targets from EZ2C targets (www.ez2ctargets.com) at 7 and 10 yards, it only took 6 rounds each to find where the revolvers were printing. After making the correct adjustments to the rear sights, I moved from shooting with a sand bag to unsupported, standing two hand shooting as I would be in the field. 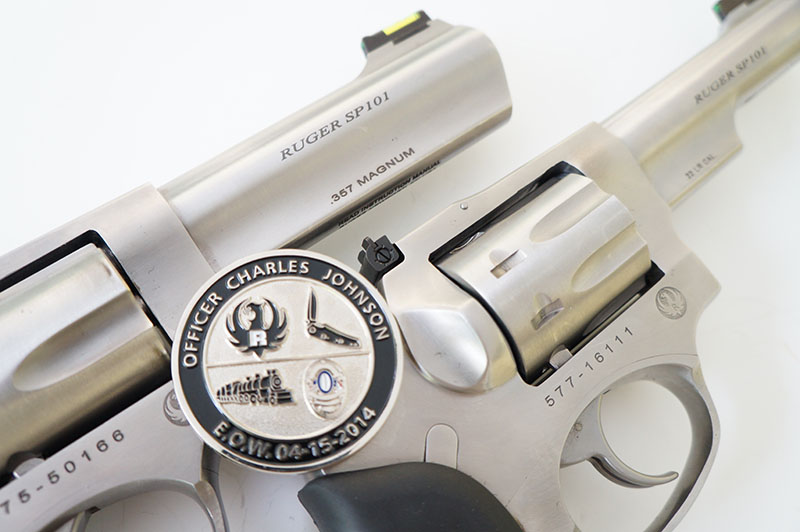 Shooting the SP101 pistols in double action mode, it comes as no surprise the trigger pull for each would be heavy. Measuring on my trigger scale between 11.3 and 11.6 lbs. it is very common for double actions to be twice that of semi-autos due to the direct correlation a revolver’s trigger has with the impact weight of its hammer striking the round in the chamber. If you went too light on the trigger, it would indirectly cause light strikes to the ammunition resulting in misfires. If a lighter trigger pull is desired while firing, the shooter has the option of thumb cocking the hammer and shooting the revolver in traditional single action mode. This method takes the trigger pull down to around 4.7 lbs. by not having the hammer to rely on the trigger being pulled to set it into firing position. With most new shooters, shooting in single action mode will greatly increase accuracy.

After spending the morning shooting, I noted my unsupported, standing 7 yard groups were keep under 1 inch with an occasional flyer with groups opening to just over 2 inches at 10 yards. From a sand bag rest, both revolvers held under 1.5 inches out to 20 yards in single action mode. The double action trigger is easy to adjust to its timing and achieve steady shots. With time and practice with this revolver, I feel like I could improve on the groupings without changing anything on the gun. I would feel very comfortable taking either of these revolvers hiking, riding ATVs, fishing or hunting. 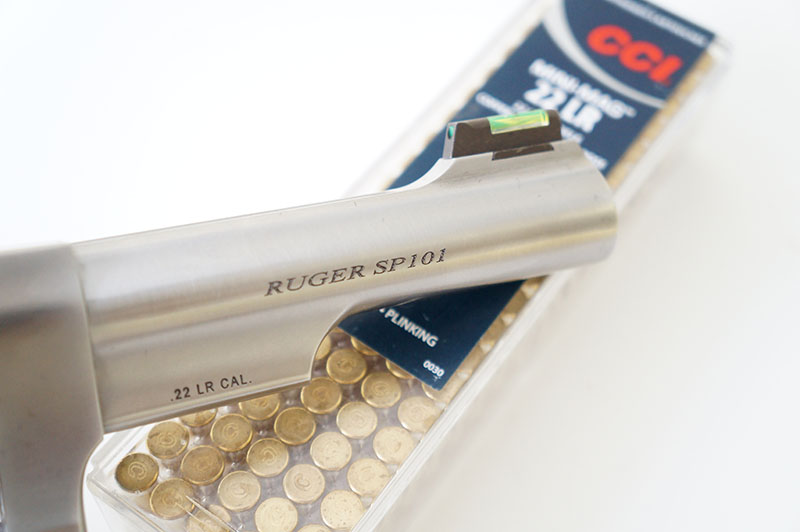 Since testing these guns myself, I have put the SP101 in the hands of several new and experienced shooters ranging from younger shooters to some of the great lady members of the national not-for-profit shooting organization, The Well Armed Woman. I asked them to please weigh in on their own thoughts for this article as well. Despite the common gripe with revolvers in regardless to the weight of trigger pull, everyone who had a chance to shoot both SP101 pistols enjoyed how smooth the trigger pull was. Ruger was given high marks on how easy the Hi-Viz sights were to aim and how comfortable the one piece rubber grips were in their hands. The SP101 has become a favorite with those with smaller hands due to the slim grip profile. Several lady shooters enjoyed the balance and weight during extending shooting sessions. The SP101 impressed some of the shooters enough to change their opinion on disliking revolvers completely!

As a firearms trainer, hunter and all around outdoor enthusiast, I can appreciate the SP101 relaunch has brought to shooters. If someone was looking into hunting big game with a large bore revolver, an economical training tool would be to spend a full squirrel season using a .22 LR SP101 to build their skill set in trigger pull, sight alignment and achieving a clean kill before moving up to perhaps a SP101 in .357 for deer or even a Ruger Super Redhawk in .44 Magnum. Ruger’s trigger action carries across to several of their revolver models to make switching to new platforms seamless. 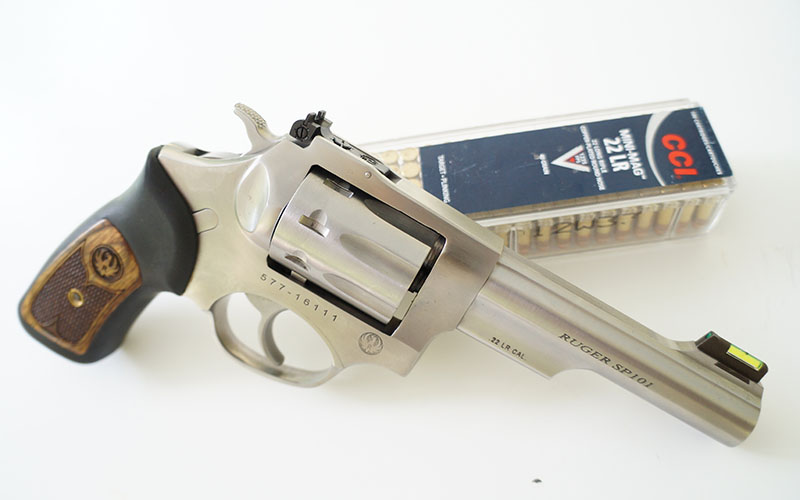 New shooters can quickly learn basic skills with the smaller learning curve the revolver has over its semi-auto counterpart. The extra focus needed in breaking each shot during the double action mode helps teach shooters the follow through needed in improving shot placement. By starting a new shooter off with the .22 LR platform, basic marksmanship skills can be learned in a virtually recoil-free environment before then upgrading to the .357 Mag version. In between .22 and .357, recoil can be introduced slowly by using .38 caliber rounds before moving on to the full power .357 Mag loads.

Regardless of caliber, the new model SP101 is the perfect size and weight to make an excellent fit for anyone putting together a “bug out” bag in case of emergency or just going on a back packing adventure for the weekend in the mountains. With a retail price listed at $699.00 US, the SP101 may not be the cheapest .22 or .357 Mag option on the market but well worth the cost for those who appreciate the top quality of an American staple like the Sturm Ruger Company. Throughout writing this article, I kept thinking about how much Officer Charles Johnson would have enjoyed how Ruger updated his beloved revolver series. The SP101 is definitely one of my top picks when it comes to today’s midsize revolver market and will remain in my collection along with a memorial #41 challenge coin.