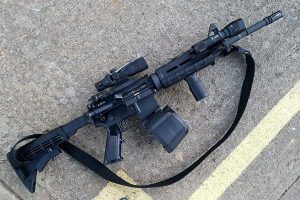 Drums for the AR-15 are not a new invention. However, the Magpul D-60 may be the very first option of its kind that’s actually built well enough for serious use. Introduced at the beginning of 2015, the Magpul D-60 drum magazine generated much interest within the shooting community. A drum magazine from Magpul? That’s attention worthy. 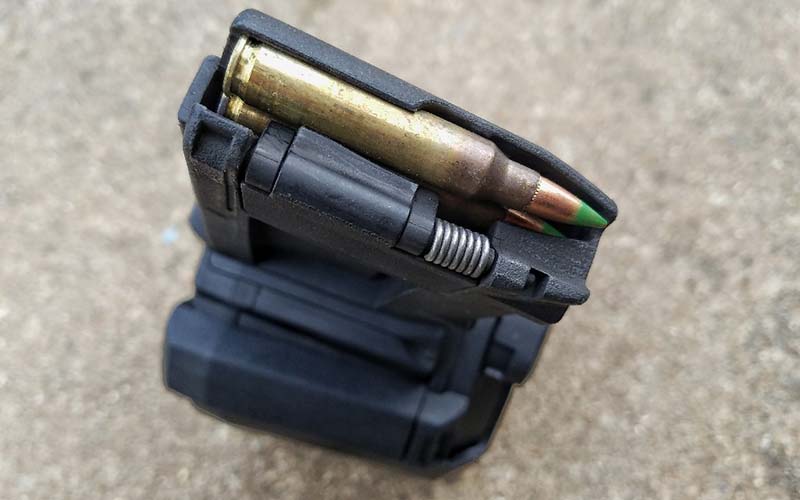 Magpul doesn’t fool around when it comes to magazines. If the durability and feeding of the legendary 30 round PMAG could truly be transferred to the higher capacity D60 drum, we would have the proverbial “game changer.”

Nearly three years later, reports are in and reliability is generally considered to be fantastic. But I wanted to see for myself, with a case of 1,000 rounds fired through a single D60 over the course of about a month. One full drum, every day. Would it feed reliably? More on that later. But first, a design and use-case overview. 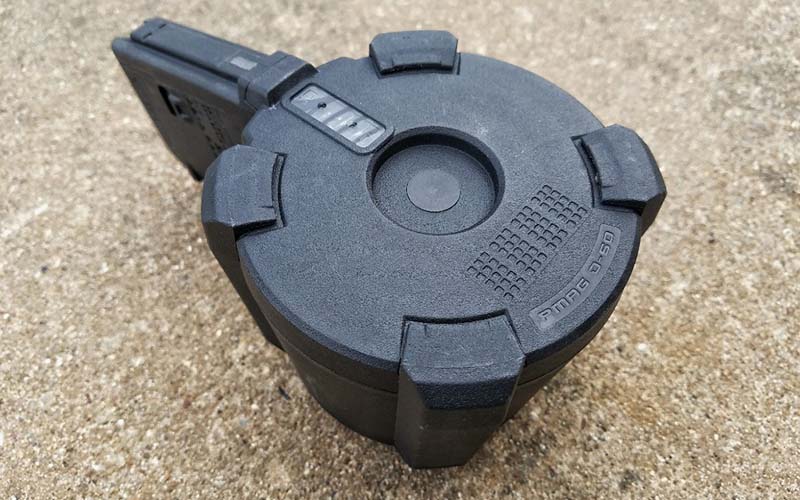 Like all Magul products, the D-60 is obviously well-engineered. Molded from a thick crush-resistant polymer, the drum feeds into a single column tower that inserts into the weapon’s magazine well. While most users will likely be feeding an AR-15 with the D-60, it’s also compatible with many of the standard STANAG 4179 magwell guns (such as the M4, M16, SCAR MK16/16S, HK416, MR556, M27 IAR, IWI Tavor, etc.). 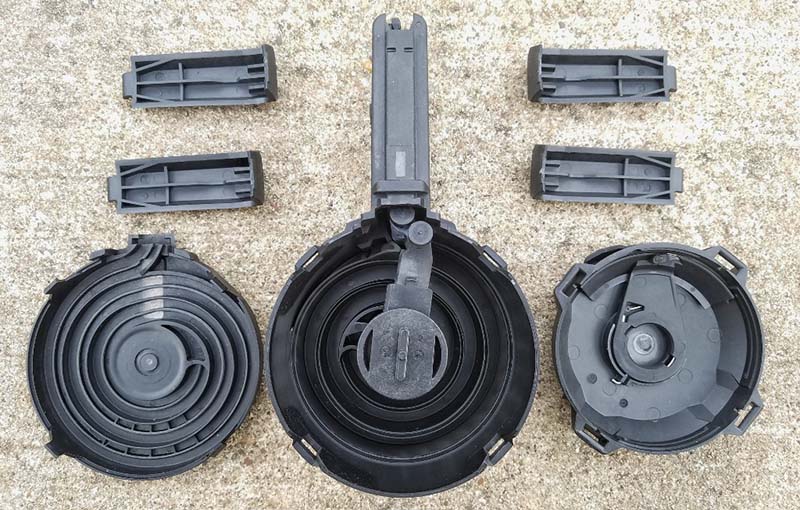 Disassembly to facilitate cleaning is fast and easy with a flathead screwdriver. Simply pop off the four “straps” that wrap the drum, and push in the disassembly tabs on the side of the body. All metallic components are corrosion resistant., and a clear window on the rear of the drum permits quick capacity checks. 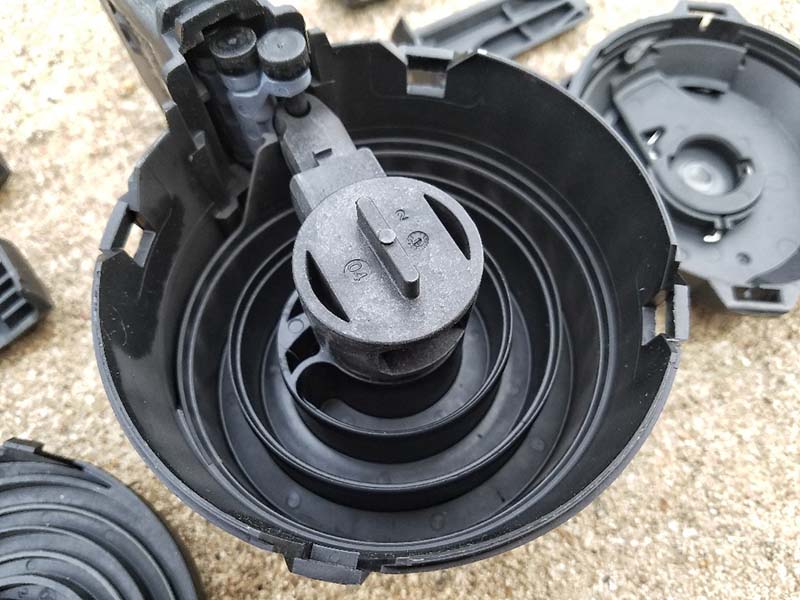 Like the standard capacity M3 PMAGs, Magpul provides a dust cover to slip over the feedlips of the D-60 to keep debris out of the magazine. This mag is designed to be left loaded for long periods of time without degrading the springs or generally losing any function, so keeping dust out is a real-world consideration. 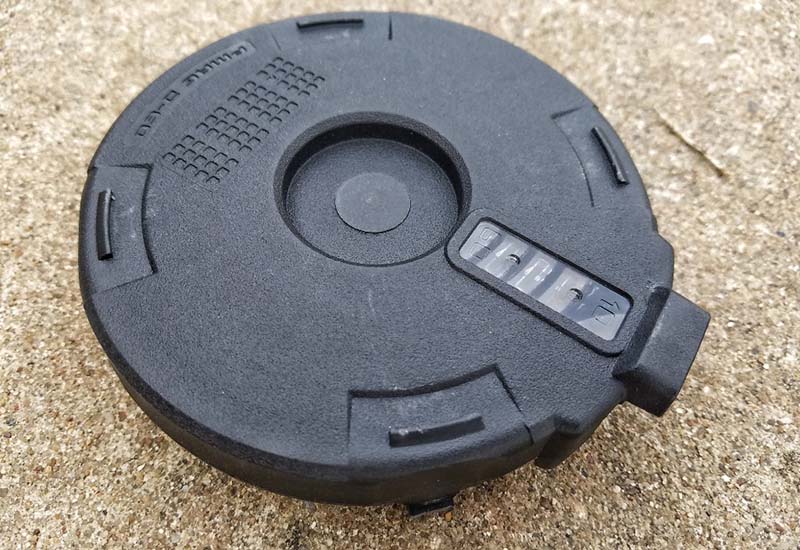 Again, like the M3 PMAGs, the D-60 includes a dot matrix on the back for identification markings with a paint pen.

One of the most common objections to the D-60 drum is that the dollar-to-bullet ratio is skewed, and not in a good way. The D-60 is an expensive magazine, especially when compared to two strapped-together 30 round PMAGs that provide essentially the same capacity. 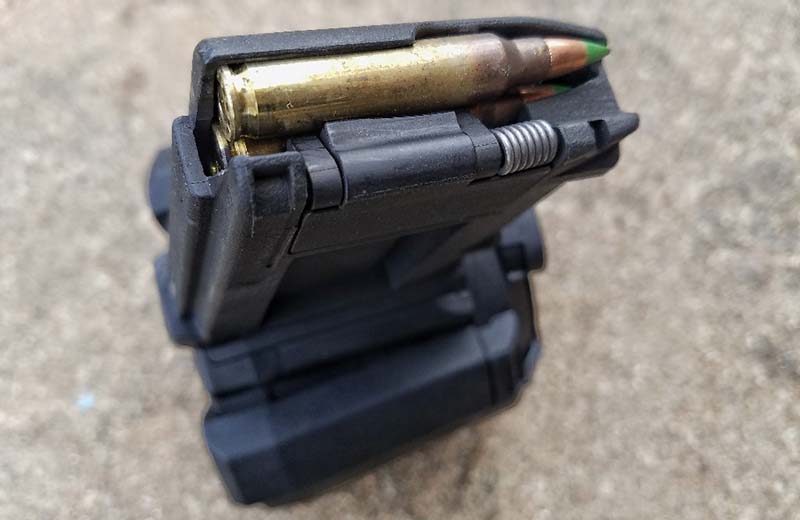 However, let’s ignore cost for a moment, and focus on what the D-60 allows us to do. I won’t pretend to know what a police officer or soldier needs when it comes to magazines, but 60 rounds for your initial mag just plain allows you to shoot twice as much without needing to take time or effort for a critical reload. Those are the facts. 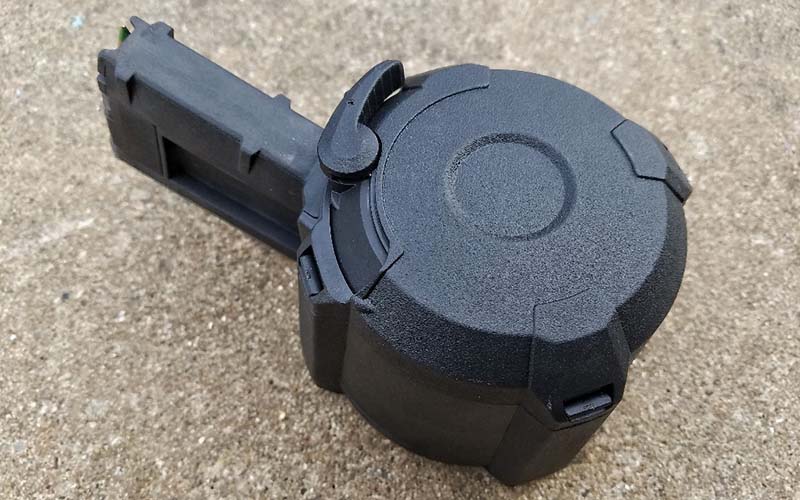 I’m just a regular guy. If you find somebody with more expertise/experience saying something different, listen to them. I’m so low-speed, high drag that I don’t even own a chest rig or plate carrier. Any spare ammunition I carry is going to be belt mounted, or stuffed in a pocket. For me, to be able to grab the gun and instantly have 60 rounds on tap without having to mess with anything else is a pretty big deal.

To be clear, the D-60 isn’t the sort of thing that I’m going to keep ten or twenty of on hand. It can’t replace standard 30 round mags. And it’s not supposed to. But, it can uniquely supplement them.

Many online voices have complained that the weight of the D-60 is a downside. Loaded with 62 grain ammo, the D-60 weighs in at 46 ounces. Two loaded 30 round PMAGs are 37 ounces, plus a few ounces for the coupler. Nine extra ounces for the benefit of a 60 round drum that’s reliable? I don’t know, that seems reasonable to me.

I suppose I’m willing to put up with a lot of “downsides” to have 60 rounds ready to go. I like lots of bullets.

First, it would be misguided to call what I did a “test and evaluation.” Any T&E that I could perform isn’t going to come close to the research and development that Magpul has put this product through. I certainly don’t have the resources to do a proper scientific test. So, take the following with the grain of salt normally associated with gun bloggers.

Like I said earlier, if you find somebody that knows more than I do telling you something different: Listen to them.

In order to review the D-60, I decided to put a case of Wolf Military Classic 55 grain ammunition through the drum, 60 rounds at a time, over the course of about a month. One drum per day, give or take, would be worked into my daily shooting schedule. Rate of fire would be as fast as I could comfortably go and keep all rounds on a 10” steel plate, at either 100 yards or 200 yards.

Sixty rounds is quite a bit of ammo, which means the mag requires a lot of spring tension. Magpul thoughtfully integrated a ratcheting loading lever into the side of the drum, which makes loading by hand considerably easier. Give the lever a turn, and insert a cartridge. I found that for the last 10 rounds or so, two cranks of the lever were needed to load a single round. 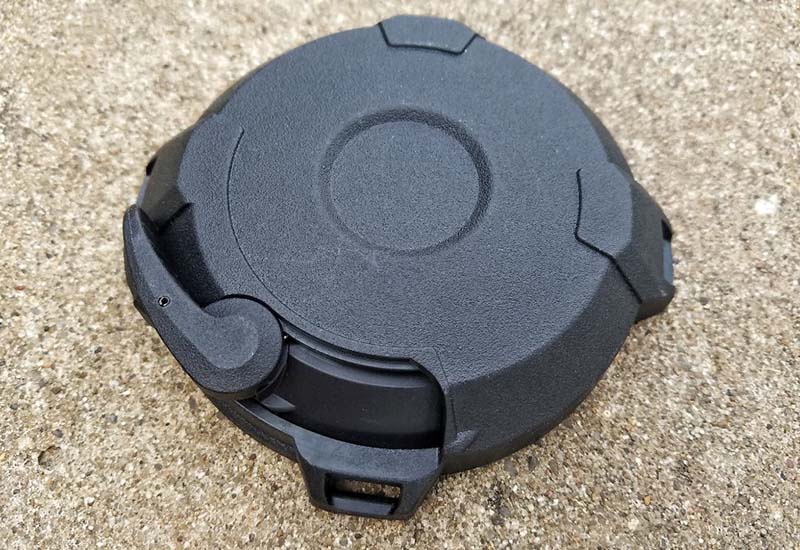 This feature definitely was appreciated each day when it came time to load the drum. The feed tower is compatible with most loading devices, which may come in handy because, like I said… 60 rounds is a lot of bullets. Conveniently, a full D-60 will easily seat on a closed bolt and is designed to lock the bolt back after the last rounds is fired. 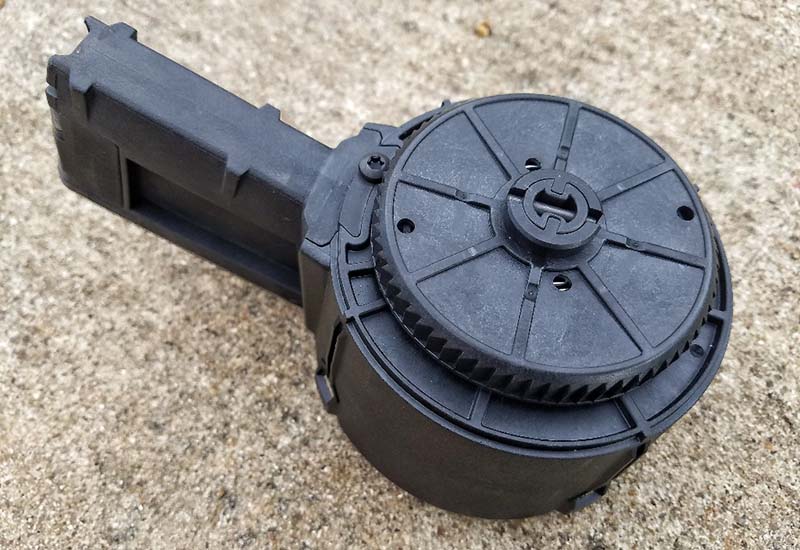 Not surprisingly, the D-60 chewed through 1,000 rounds with flying colors. I used my workhorse Bravo Company USA 14.5” carbine-gassed upper, on a home-built Rock River Arms lower receiver with a Colt stock. Optics used throughout the process varied. Not a single malfunction occurred, and the rifle and magazine were never cleaned or lubricated. That’s good enough for me, and my regular-guy duties.

All of these photos were taken after 1,000 rounds of Wolf Military Classic ammunition were run through the drum, with no cleaning or maintenance. It’s pretty much just as clean as when it was new. 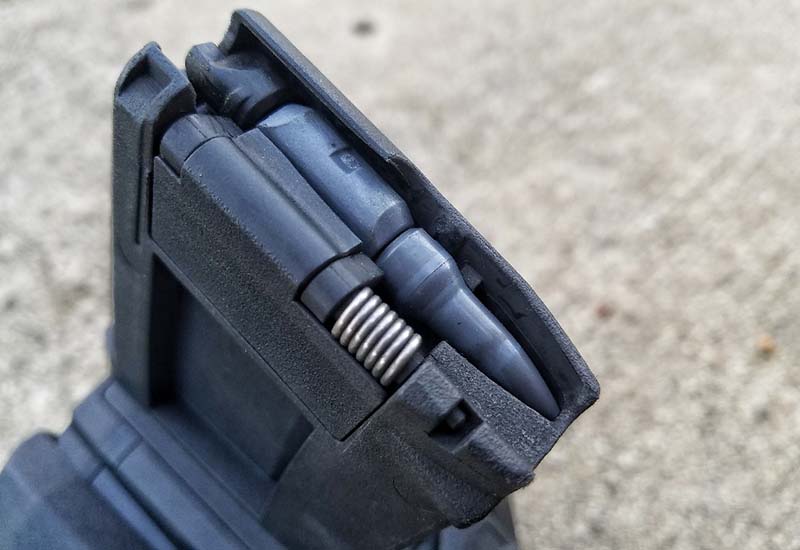 I was extremely impressed with the D-60’s performance. I did my test in cold weather, and ran into no issues with the relatively complex plastic design becoming brittle.

Usually, I send products back after reviewing them. This time, the D-60 is staying with me, and has found a permanent home in my go-to carbine. Sixty rounds in the gun and the confidence that they will feed without a hiccup is just awesome, and for me, well worth the price of admission. 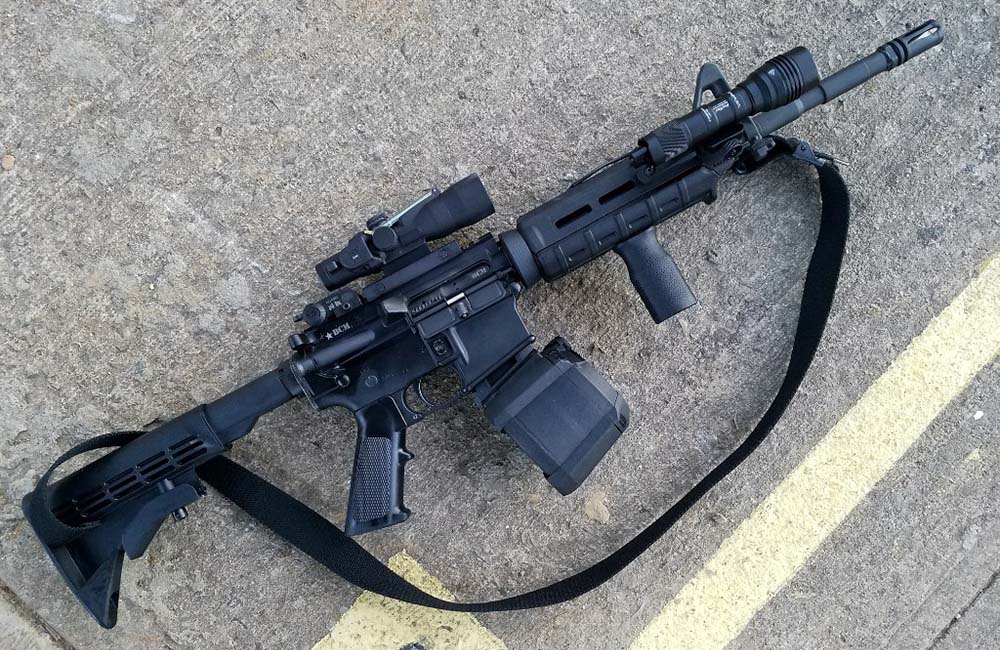