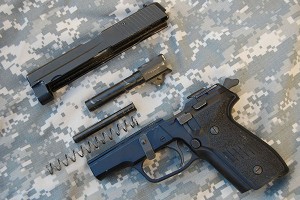 Being a military sponsored shooting team, most folks with the U.S. Army Reserve Marksmanship Program sport M9s – some more reluctantly than others. Berettas are fine shooting pistols, as accurate and controllable as any quality issue service pistol out there but some people find them a bit thick. Worse, the military issue versions have an unfortunate propensity to break locking blocks at inopportune moments. This is only a factor in pistols that routinely see thousands of rounds of ammunition. Most Soldiers and Marines will never notice, however, due to their volume of practice and competition shooting, a number of our team members have used the M11 for this reason alone.

So how did SIG Sauer‘s little pistol find its way into DOD armories? How does it compare to other SIG designs? First, a little history. The US Department of Defense’s M11 (SIG 228) is a compact version of the P226. It serves a number of DOD organizations, notably Army CID, Air Force OSI, Naval Aviation and Criminal Investigative Service and is general issue in Sweden and with numerous police agencies around the world. The primary difference from the Sig Sauer P226 is its shorter slide and barrel and only one choice of cartridge (9x19mm Parabellum.) Normal M11 magazines have a 13 round capacity but 15 or 20 round P226 mags will work. With proper modification, Beretta mags can be made to work as well.

George Harris, former Director of Training for the SIG SAUER Academy and USAR Marksmanship Program member, was a lead man for the military’s adoption of the M11. The US military had picked the Beretta 92 series as the M9 a few years earlier and was now looking for a more compact model for special issue, as outlined in their “Compact Combat Pistol” project. The initial concept was to replace the various .38 Special revolvers floating around the inventory. A smaller pistol would also meet the needs of personnel with smaller hands and be more convenient for air and fighting vehicle (i.e., tanks) crewmen as well. Project managers Bob Abernathy and Major David Smith approached Harris at SIG and were specifically interested in the company’s 225 model.

The first point of interest was why they specified the 225. SIG’s 228 was offered in the same chambering, and is just as compact, but held a double column thirteen round magazine instead of a single column eight rounder. The folks at the MP school did not know about the 228. Knowing that Beretta had won the contract for the full size pistol, Harris inquired why they didn’t go to with one of that company’s other designs, such as the 92M, a compact with a single column magazine. The project team did know about the Beretta compact but their initial spec was for a SIG 225.

Harris suggested that the 228 would be a better choice but the project team insisted on the 225. As the customer is always right, Harris gave a presentation for SIG at Ft Benning on the 225 in June 1990. Being limited to one hour there was no time for other SIG offerings, however, he brought samples of the 228 to show at lunch. As fate would have it, the presentation was done in a wooden hut with no facilities so far out of the way that nobody bothered to leave during the scheduled break. Harris had a captive audience for another hour and could show off the 228.

It wasn’t until autumn that the follow up call came. Guy Smith, a Project Manager at Aberdeen, wanted a full day presentation at their facility. Now the Army had decided on the 228 instead. In April SIG received an official solicitation package for procurement. By October the military specification for Project 1005, “Pistol, XM11” was put out by Rock Island Arsenal.

Formal testing by the Army at Aberdeen took place in January 1992. Three 228s went through 15,000 rounds and experienced a grand total of one stoppage. Seventeen were allowed. Aberdeen’s specs required a service life of 5,000 rounds and that all parts had to be 100% interchangeable. Numerous M11 and 228s have exceeded 25,000 provided the breech block roll pins are replaced. These pins are rated for about 5000 rounds, however, for unknown reasons (likely because the original spec was 5000 rounds for the entire pistol) the Army published Technical Manual for armorers (23&P) does not point this out. Armorers forgoing this maintenance will find that the pins flex and eventually break. If the pins are replaced the pistol will continue on for tens of thousands of rounds more.

On 23 April a written contract was agreed upon. The first full procurement was completed in early parts of 1993 for 6000 pistols. The first batch of 600 228s, christened M11, were sent to the Air Force OSI (Office Special Investigation, similar to the Army’s Criminal Investigation Division) and the rest were shipped off to Rock Island to distribute throughout the Army.

In total, the US Department of Defense has bought 25,000 M11 pistols and have distributed them throughout the Army, Air Force and Navy. The Coast Guard, under authority of the Department of Homeland Security, purchased about 6000 229s chambered in .40 S&W. Though never officially acknowledged, the M9 is simply too big for some people’s hands and a smaller pistol is simply a better choice.

M11s began to proliferate and are issued in two formats with the primary difference being the sights. Type One M11s feature a set of three dot horizontal iron sights and Type Two have tritium night sights. Of the total procurement, 15,000 are of Type One and the rest are Type Two. The finish is Zinc Phosphated and a “K Coated” polymer bake on (everything except springs.) The locking insert, slide and breech block are marked “MP” (Mag Particled.) The metal is x-rayed to check for cracks and the frame is Dye Penetrant Tested. To quote George Harris, “It is a bullet proof piece of equipment.”

Differing from SIG’s original 228 is the length of the M11 trigger. One of the specs called for a shooter wearing a gloved hand to fit and a wooden dowel was used to test this. Because the standard trigger was too long to fit the dowe,l a shorter trigger was substituted. 228s have the serial number stamped on the slide, barrel and frame while M11s are numbered on the frame only, along with “M11” and “US” markings. Type Two pistols have a “T” on the sight.

P228’s differ from their full sized P226 cousins primarily by barrel and slide lengths (the P226 is just over a half inch longer) and trigger guard shape (P228’s are curved, P226’s are slightly hooked.)

SIG discontinued manufacture of the P228 when the P229 was offered in 9mm. P229’s are nearly identical to the P228 and are available in 9 mm, .40 S&W, and .357 SIG. The major difference between a 229 chambered in 9mm and a 228 is the slide. The 229 features a homogeneous stainless steel slide while the 228 slide carbon stamped steel with a separate removable breech block secured by roll pins. Despite this difference, the slides will interchange and work between frames.

When tested in a machine rest, issue M11s sometimes have a slight mechanical accuracy edge over issue M9s, but the difference is negligible in any practical concern. In human hands, assuming they’re large enough, M9s will often group slightly better because of the sight radius. It is bit easier to squeeze that accuracy out with the longer gun. Team shooters that have considered switching did so primarily due to the locking block. M9s break occasionally while M11s don’t, assuming the roll pins are swapped every 5000 rounds.

Another M9 annoyance is the slide mounted safety/decocker. A shooter has to be careful during any slide manipulation to avoid knocking the safety on and inadvertently putting the pistol temporarily out of action. This is enough of a concern that the Army Field Manual for pistol training includes a safety/decocker check in the prescribed immediate action drill to ensure that this isn’t the cause of a pistol that won’t fire. The M11’s frame mounted decocker-only lever will never have this problem. At worst, a misplaced bump to the lever will cause an unexpected double-action trigger pull, not a pistol that momentarily stops functioning all together.

M11s provide everything you need in a quality, well-built issue service handgun and nothing you don’t and will serve the needs of any practical purpose. USAR Team Shooters are picking them up and getting equivalent scores on most courses despite the smaller sight radius. All controls are thoughtfully laid out and fall to hand readily. While nobody will confuse it for a match trigger, the fire control system makes good shooting easier. Of particular note, especially in fast shooting, is the short trigger return making resetting for multiple shots in a string more positive.

Where the M11 shines is in being more compact. Eric Smith, is a long time national-level shooting competitor, combat veteran with a tour in Iraq attached to the 101st Airborne, multiple President’s Hundred recipient, Palma Team member, Distinguished marksman, and USAR Shooting Team member. He’s also in his twenties and weighs in around 145 pounds. His impressive marksmanship resume and smaller stature gives an indication on which pistol may be better for most Soldiers. “The Beretta is nice, but it’s a bit big for me. The M11 is just more ‘ergonomical’ ”, he says with a laugh.