Skip to content
blog.GritrSports.com > How to Guides > Finish Your Training
How to Guides 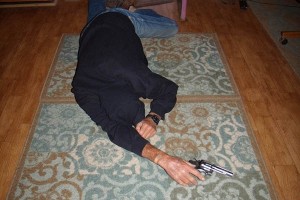 Many have written about finishing the fight – but we also need to finish our training. By that I mean we need to train in what we are going to do immediately after a shooting, as well as in the long term. It’s not enough to say “find cover, reload, and scan the area” – saying it is not training! We need to follow through the talk with action.

This first came to my attention when I was teaching officer survival at our academy. In the vehicle stops portion of the training, my students had a tendency to, if justified, fire shots and then … stop. They acted as if shooting the outlaw ended the problem, and they would look to me for guidance. I quickly started asking them what they would do next – what should they do, who should they call? Most of them remained behind cover, some reloaded. A few made a safe approach to the downed suspect and cuffed him/her. But some of them immediately approached the suspect with a holstered gun. And as far as who to contact, all I usually got was a blank stare, followed by “the office????”

The decision to remain behind cover, or to control (handcuff) and give first aid to the outlaw is based upon many factors, not limited to:

Our general rule of thumb was, unless the outlaw was clearly completely out of the fight, stay behind cover and wait for backup. Over time, the outlaw may offer further resistance, or give up and request medical aid, or even get up and run away. Until they are secured and all weapons removed, they remain a threat!

In all cases, our priorities remain:

We did not risk our lives to save the outlaws’ without minimizing the risk. This dealt with ways to approach downed suspects, and the requirement that they get handcuffed.

Finish Your Training For Civilians

How about us civilians? The census says 83% of Americans live in cities, so your “finish” can devolve to calling 9-1-1 with your name, location, and the need for police and medical aid. There is a lot of discussion about what, if anything else, to say to dispatch, as that is a public record that can, and usually will, be made public. As a civilian, I will not go further than: “A man tried to kill me, he has been shot, send police and EMS.” The only thing I will add is the description of any suspects who are still at large. Beyond that, I will not answer questions about what happened and invoke my Miranda Right to remain silent.

Unless you have pre-planned, you are unlikely to have exactly the right medical equipment or training to treat the person you shot (ONLY if it is safe). But in one of my early classes on treating gunshot wounds, a Paramedic told us “use what is available.” Doctors can cure infection, but they can’t cure dead. If all you have to stop bleeding is a dirty shirt, use it!” You will find that the typical home or vehicle first aid kit totally inadequate for this purpose.

When I say “finish your training,” you need to think things through. Suppose you hear banging in the night, and then breaking glass. You leap out of bed, grab your gun, and find an aggressive intruder in your front room. You order him to the ground, and he complies. Now What?

There you stand, in your pajamas, with your handgun and flashlight. But your phone is in the bedroom! How do you call for the police? If you have a spouse or roommate, yelling should work. If not but you live in an apartment, pounding on the wall may get someone’s attention. But what if you are alone in a separate home, or your neighbors are on vacation?

This is why some folks have a home defense package next to their bed. A small pack can hold your pistol, spare ammo (there could be more outlaws), flashlight, and your cell phone. I do not keep the more extensive gear that some do – first aid gear, backup gun, spare flashlight, all attached to body armor or a tactical vest, because I do not expect to have the time to don all of that. And I expect my “fuzzy alarm system” (dogs) should trigger if the regular alarm system has not.

The dogs pose another problem – how do you control them in this scenario? They may be aggressive and bite the bad guy, even though he has complied. Or, they may think he is their new play pal, and try to lick him or otherwise get in the way. Better include controlling them in your “finish” training.

What about your spouse? Is he/she ready to respond and back you up, or will they hide under the bed, frozen in fear? Do they have a gun, and do they know how to use it? Will they be willing to use it? Remember, your home invader could be a neighbor, or someone you recognize – without knowing they have a meth habit. Will your spouse deal with this situation in a professional, detached manner, or will they go to pieces? Have you even talked to them about it?

And what about your children? How old are they, and more important how mature are they? Is the home invader a friend, wanting to surprise your child? Someone you have forbidden them to see? All of these are possibilities, and much more. You need to have a maturity relevant discussion with them, too.

Encounters Outside The City

I am part of the 17% of Americans who do not live in a city – I don’t even live in a town. We live way out in the County. Response time for the Sheriff’s office can be 45 minutes or more! Compounding the problem, cell phone service where I live is spotty. I have a special antenna and amplifier on my home phone, and my personal cell has no service on most of my land. So my problem is, do I leave the outlaw to call for help? Could he recover and attack me, or leave, while I am on the phone? No, I do not carry handcuffs on the ranch – but I have some restraints nearby, and I have applied them to a lot of outlaws – I used to teach handcuffing. Applying restraints – handcuffs or flex cuffs – can be very dangerous, as it requires physically contacting the bad guy. Police academy’s spend a lot of time teaching arrest techniques – the application of handcuffs. Don’t think you will know how because you have watched COPS. He may decide this is the time to attack you and /or flee. If they flee, LET THEM GO! Do NOT chase them or fire shots at them – those turn you into the aggressor.

What if you had to shoot them, and they are now bleeding into your carpet? Do you render aid? Again, that requires the right equipment (band aides are of no help!) and skill set. Plus, you have the same quandary about them resuming their attack on you when you approach them! Even with the gear, the decision to render aid is situational, and every situation will be different.

Encounters In The City

In the city, you can have different, but no less complex problems. Friends or family of the attacker may arrive, and a crowd will usually gather, who may be hostile. Well meaning people may want to help the attacker, in the process moving or even removing evidence and altering the scene. You do not want to lose control of the weapon(s) the attacker had, and if they disappear you start to look like a bad guy. In one recent case, a member of the crowd ran off with the outlaw’s handgun, setting the scene for “the police shot an unarmed man” until they recovered a surveillance video tape that showed the gun. Some folks actually stand with one foot on the outlaws’ gun, to preserve the evidence.

Finally, you do not want witnesses, who could assist in your claim of self defense, to wander away. The more people who see me act in defense, the better my outcome in both criminal and civil cases. What can and should you do to control them? You must also beware of the folks who arrive after the fact, but seek their 10 minutes of fame by claiming they: “saw the whole thing,” altering the facts to fit their agenda, or what they have seen on TV.

Your cell phone can help you here. While I decline to answer questions about what happened, I will leave my cell phone ON, so dispatch can record my commands should the suspect start to recover and resume his attack. I may also choose to use the built in camera to take pictures of the scene and the crowd, to later identify witnesses who may not stick around.

Perhaps the hardest thing to train into your psyche is to keep quiet! As a local lawyers’ card says: “You have the right to remain silent – USE IT!” Immediately after a high stress situation, you are likely to be awash in conflicting emotion, and want to vent – to anyone and everyone. The gulf between what you say (“I did not mean to kill him”) and what you were trying to say (“I told him to stop, and he just kept coming. I did not want to kill him, but I had to defend myself and my family!”) can put you in prison for the rest of your life. You may feel elation at having survived (which can be twisted into “he wanted to kill him!’”), or saddened at having to take a life (which remorse becomes “he did not need to shoot him!”). Your innocent remark about how your training worked becomes evidence that you planned to kill. Thus, you survive problem one (the assault) only to lose “problem two,” the criminal and civil cases.

If you have already decided on a lawyer to defend you, where is his phone number? I do not suggest you call your lawyer before the police – it makes you look guilty. But once the situation is controlled and the police & EMS have arrived, it may be time to invoke Miranda and ask to make that call.

If you do not train and practice these things, you will not do them when it is YOUR DAY. As Barrett Tillman famously has said: “In an emergency, you do not rise to the occasion, you default to your level of training.” If you have not trained to make the right calls, render the correct aid, preserve the evidence and scene, record or retain those who were really witnesses, and limit your remarks, you may join that long, unhappy line of folks who go to prison and lose everything. So finish your training! It’s really not over until the Judge says: “Case Dismissed”!