Skip to content
blog.GritrSports.com > How to Guides > Training For The Fight – Target Selection
How to Guides 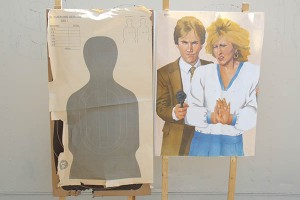 In the beginning, there were round targets called “bullseyes,” a reference to their similarity to the eye of a bull. We shot handguns at them from 20, 25, or 50 yards, and the guns were held in one hand. Even though this was how the military trained during WWII, it did not prepare us for personal defense – it prepared us to fire from a stationary, fully erect position with the handgun extended toward the target. In fact, this form was descended from dueling, a rigid, closely ruled world of “gentlemen.”

Some time in the 1930’s the Langrish Limbless Man target evolved – and it looked like a man, sort of, with no arms or legs. This is, to my knowledge, the first of what I call the BLOB targets. This group of targets kind of resemble a human, if you squint, in poor light – maybe. But in order to avoid offending the weaker sort, they are still in use.

One of the most common is the NRA B27 target, used for PPC shooting. Sadly, it is one of the worse targets, for while it does have a head, the highest scoring zones are set way too low, in the geometric center of the blob. A glance at any view of internal human anatomy shows the vital organs high in the chest – from about the third button on a man’s shirt and up. Plus, the B-27 is all black, making it hard to clearly see your sights – although lots of outlaws do dress in black.

Another in the long list of blob targets is the principal target used by the FBI and DEA (who share the same training school in Quantico, VA.). Sometimes called a “coke bottle” target, it looks more like a bowling pin, with a sort of head and no distinct scoring zones. This target is usually all white, on gray paper.

The predecessor target for the FBI was a silhouette of a man, with its right elbow cocked away from the body, resembling someone drawing a gun. Now called the B-21, every part of the body had a score in the K (Kill) or D (Disable) scale. A center hit was a “5” (regrettably still too low), while the right shoulder, for example, scored a K3 but a D5. The head was scored a K5 but a D2 – I wonder who figured that out.

When the Treasury Department moved away from bullseyes in the late 70’s, they wanted a target to transition into shooting a humanoid shapes. Wanting to offend no one, the Trans-star target is only printed in blue or green – it makes one wonder if they fear invasion by big green men from Mars? At least the scoring zone was moved up to a proper location in the upper center of the chest, but the colors get progressively lighter toward the center. I have yet to see anyone, anyplace, dressed like that! The outline looks a bit like someone standing with their hands in the pockets of a jacket – certainly not a threat! Since the Federal Law Enforcement Training Center (FLETC) was started under the Treasury Department, the Trans-star is their primary training target.

Other agencies also use blobs – I.C.E. uses the Customs CAT-1 target, and police and sheriff’s departments large and small have their own designs.

WHAT IS WRONG WITH A BLOB?

The problem with the blob targets is they do NOT prepare you to see a real human threat. The threat may be male, female, young, old, fat, skinny, well dressed or looking like a bum, tall or short. There are documented cases where officers failed to shoot at people who were shooting at them: “Because they did not look like our targets!”

The next step up are the drawing or cartoon targets – black and white or even color renditions of real people, threatening the shooter in some way. The oldest of these is The Thug – yes, that is the name of it! It shows a heavy set male with a gun in front of his face aimed at you, and his left arm in front of his chest – somewhat like the old FBI crouch position. This target seems to originate from the 1940’s and continues in use with I.C.E. At least it looks like a person! The Secret Service has used a drawing of a man in a suit pointing a gun held at his side for 40+ years – still a valid target, but a bit dated.

The cartoons have been available in both sexes, with a variety of simulated ages and dress. Today, we see them mostly as “Zombies,” which can let you practice on a semi-realistic target at a range where the operators may be a bit squeamish. They are also available with hostage takers and victims, and even multiple people with a threat in their midst.

My personal favorite cartoon target is the first version of the U.S. State Department “Izzy” target. It portrays a vaguely Middle Eastern male with a moustache, slightly turned to his right, holding an AK47. The first version of this had his upper body on one side of the target, and his lower body on the back. Put one above the other, and you have a 5’7” male! I once got to meet the model for this target – the real Izzy! He was a State Department Diplomatic Security Service officer!

Much better than the cartoons are the photo targets in black & white. Now, you have real people, posing real threats to your safety and survival. They are dressed in real clothes, holding what look like real guns and knives and broken bottles. They also are not all square on and holding their gun at the geometric center of the target. Using targets that are partially turned away from the shooter brings in the element of aspect – where are the vital organs with the attacker partially turned? Where should you aim to stop the threat? This can also bring out the consideration of what caliber handgun to carry – will my .32 or .380 penetrate this big guy’s arm and reach the vitals? Should I consider a larger caliber gun?

The best targets to train on are the color photo targets – real people, in real settings, in all their various modes of dress, body shapes, with various weapons including empty hands (in 2014, over 800 people in the U.S. were killed with personal weapons – hands, feet, teeth, etc.). Plus there are overlays, so the outlaw you have seen holding a pistol is now armed with a cell phone – or is wearing a badge! I have used paste on plastic badges to confuse the issue for some trainees.

Some of these are facing at 90 degrees to you, and there are groups of people with one woman holding a gun on a male, while another female points a gun at you! And what does a shotgun or AR15 look like when it is pointed directly at you – is that a gun, or a golf club? A knife or a dust pan?

There are also photo targets of dogs – both standing looking at you, and teeth bared, charging you! Shoot, or don’t shoot?

We all like reactive targets, and these days there are plastic targets that are self-healing and good for hundreds of rounds. The newer versions are mounted on a plastic wand so they bend backwards when hit. They can also be used at very close range, where real attacks happen. While they are usually in the “P.C.” colors of red/yellow/green, etc., you can always dress them – you don’t still need that “and all I got was this lousy tee shirt” you got as a gift, do you? Add a Halloween mask and suddenly you are facing a real nightmare, only feet away! Now THIS is realistic training!

Steel targets are great for feedback, but they have some down sides. They are heavy, must have a solid support system, must be hung so they slant toward the ground, and most important, they can only be shot from 10 yards away to avoid bullet splatter. On the other hand, you do not need tape, staples, a backer, and a supply of targets – a spray can of paint is all! And they are FUN!

What if the only place you can shoot forbids all of the above? You know, an old timer’s range where “no humanoid targets allowed” is the rule? There is still a target to help you train, and it’s the cheapest target of all! If you go back to the picture of the vitals of a human, you will find that the area is just about 81/2” X 11” – the size of a blank sheet of paper! So grab some colored typing paper, post it, and tell the old fogies you are just getting started! Then shoot for speed rather than tight groups, at the closest allowable distance!

What will YOUR fight be like? No one knows. So practice on the most realistic targets you can – and train to WIN!