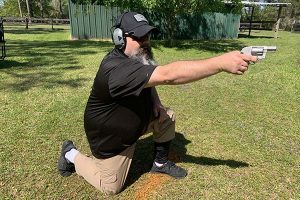 When I started my law enforcement career at the turn of this century, I was blessed to be surrounded by old war horses in the form of Sergeants and Lieutenants serving their last years on the job awaiting retirement. Most of these seasoned officers started their careers after coming home from serving in the military during Vietnam. These experiences from overseas brought along a lot of lessons learned about human nature, the cunningness of man, and violence of gun fighting from firsthand experiences. These hardened men had stories that were both entertaining and exciting, with each teaching a hard lesson to those who could understand. So, when it came to notice a common firearm kept close for discreet protection by many of these grey warriors, I took notes.

In both civilian and law enforcement circles, the Smith and Wesson double action J-frame revolver chambered in .38 Special has long been a favorite since its introduction in the 1950s. For the senior officers in my department, the 2” barrel (often referred to as a snub nose) 5 shot revolver was a favorite “unofficial” carry pistol. This small wheel gun would have the duty of being backup to their department side arm, a hideout gun stuffed in a desk drawer or briefcase for emergencies and an off-duty gun carried in a jacket pocket or stuffed inside a boot. As my good friend and award-winning gun writer Roger Eckstein once wrote, “The object of lightweight snubbies is to afford an effective level of firepower in a package that is reliable, simple to operate, and easy to carry.”

To the modern nay-sayers sitting in gun shops who complain these little revolvers can’t be shot accurately, this is where their ignorance truly shows. I have personally seen these gentlemen with aging eyes peer through coke bottle glasses and burn down center mass hits one after another before walking off with perfect qualification scores. Is it easy to shoot these little wheel guns accurately? Hell NO, but it can be done? YES, I’ve seen it happen year after year throughout my career. It simply takes something a lot of shooters these days who simply want to “go fast” don’t have – heart, determination and dedication to practice enough to achieve their goal. With that in mind, this week’s review article honors these fine gentlemen with a look at an updated version of their best kept secret, the Smith and Wesson Model 638 Airweight double action revolver.

The model featured this week is a variation of the classic model 638 Bodyguard that many detectives and security specialists have carried for decades. What makes this model different isn’t its “humpback” frame shared by its predecessor and other S&W hammerless designed revolvers such as the 642 and 442, but the fact that it features a very low profile, semi-bobbed hammer. This hammer includes a small snag-free thumb stud with just enough grip to firmly cock the hammer into single action mode for a lighter trigger and more precise shot.

Visually, this gun as often looked at as the ugly duckling of the line up compared to the classic look of the larger Smith and Wesson Model 66 Combat, but for those who understand its design, the model 638 is gorgeous! This pistol features a lightweight alloy frame with a stainless steel barrel and cylinder. It only weights 14.6 oz! The gun measures 6.3” with a 1.785” barrel. The sight radius consists of a fixed front ramped sight and rear notch style sight that is roughly 3.4”. Despite the gun’s small dimensions, the 638 is fully rated for +P ammunition. With the right ammunition, that’s a lot of power in a small, lightweight package.

To carry the model 638 daily, I chose carry using a Gun Sox ankle holster sent over for testing by Cheata Tactical and a Safariland model 18 inside the waistband holster. When wearing jeans or khakis, the Gun Sox’s full calf coverage would give me a perfect way to keep the gun secure and readily accessible. During this time of year, a pair of shorts end up being the attire for the day when I am not teaching on the range or filming. For carrying concealed during causal hours, the Safariland holster offered a great option for appendix carry as well as at the 3 and 4 o’clock positions.

To put the model 638 Airweight through the paces, I met with fellow gun writers, Clint Steele and Jerry Moody at our local private range known as “The Swamp”. For testing, I brought along four different loads consisting of Winchester 110 grain Jacketed Hollow Points (JHP), Corbon +P 110 JHP, Winchester Bonded 130 grain JHP and 130 grain Full Metal Jacket (FMJ) from American Eagle. Once the cameras and targets were set up, each shooter took turns running each of the different loads through the pistol. These tests would illustrate various felt recoil and performance.

Working at common self-defense distances of 3 to 15 yards, the 638 gave each shooter solid vital zone hits shooting from the double action mode. More precise shots to the head of the target could be taken by thumb cocking the hammer manually in single action mode to reduce the trigger pull from 14 lbs. to a more manageable 4 lbs. All ammo performed well, with the point of aim and point of impact matching up well with the fixed sights. Of the four loads, the +P Corbon 110 JHP ammo really stood out as far as felt recoil. Despite the slim but comfortable black rubber grips, I could feel a sharp snap in my hand as each round was fired. For regular practice, I stuck with the American Eagle FMJ rounds and conceal carried the pistol with the Winchester Bonded 130 grain JHP for better results on soft targets.

Since I normally carry semi-auto pistols daily, loading was the only aspect of testing the pistol I really needed to brush my skills on. Despite knowing how to do it with my eyes closed and even teaching it to others in classes, it still takes a small learning curve to get everything flowing smoothly. The model 638 fit in my hands very well, allowing my short sausage digits to manipulate the cylinder release and shrouded ejector rod quickly. Most of the spent brass fell out cleanly with only gravity pulling on it while I had the gun tilted back. Only the Corbon casings needed an extra punch to clear their chambers.

What I noticed the most during slow fire was there seemed to be a slight glitch when pulling the trigger. It was heavy and smooth until the cylinder made its rotation then I would feel a slight stop or “hitch” point before the hammer dropped. If I manipulated the trigger pull just right, I could stop the hammer very close to its natural single action cocked position before continuing pressure to fire. After a morning of shooting, the 14 lbs. trigger pull really started to wear on my finger a bit as well.

Another point of interest that arose came when I started shooting the pistol in single action mode. The hammer features a small stud on the top that rides slightly above the frame during its full range of motion. There are four small grooves cut into the stud horizontally to provide just enough grip surface for my thumb to pull back the hammer. I noticed this to be relatively difficult with the stiff factory hammer spring. Every four out of five attempts would be successful, but before carrying any pistol for self-defense, I require everything to work every time if I may need to depend on it. One quick call to my friend, Paul Erhardt at Apex Tactical and a J-Frame performance spring kit as they call their Carry / Duty kit was on the way.

Once the kit arrived, it only took 20 mins to install the new trigger return spring, hammer spring, firing pin and firing pin spring. As I dry fired the 638 in my work shop, I could immediately feel a difference. In both single and double action dry firing, the trigger and hammer seemed much smoother and gone was that annoying “hitch” feeling. I headed over to the range and proceeded to run an assortment of ammunition through the gun to test function under rapid fire. Overall, I could not have been more pleased with the gun. It ran smooth as silk with zero function issues.

With more confidence in the pistol, I began to carry it daily inside the waist band or on my left ankle. A bit of dry fire mixed with “bar room speed” practice on the range really showed off how easy the model 638 could be drawn and put into action. Everything about the pistol’s design is meant to be completely snag free upon quick retrieval prior to sending lead down range. When feasible, I would even carry the S&W in addition to my SIG P365. This combo would offer me not only 16 total rounds of firepower but also an additional firearm in the extreme case of mechanical failure with the other. At no point did I feel uncomfortable with the Cheata Tactical or Safariland holster during carry.

Overall, I really enjoyed the model 638 Air Weight revolver. Its practical application is timeless due to its reliability and simplistic operation as with any revolver compared to semi-autos. If the hammer drops and the cartridge fails to fire, rather than going through a complex system of tap, rack, fire, drop magazines, rack, load, rack and fire again, the end user simply pulls the trigger once again and first another round. Where the model 638 really shines unto its own is the lightweight carry and clean lines that resist snagging on clothing during the draw. As I found with both the Safariland holster and Gun Sox, all day carry and quick, efficient movements to put the pistol into action are easily accomplished without issue.

If you need to run to the store at night once you have already gotten home, out of your work clothes and into your favorite sweat pants, this would be good choice as well. Rather than needing to change into jeans and belt with your daily carry holster, you can simply drop the model 638 in a jacket pocket and head out. Its advantage over a small semi-auto pistol comes in the event you must shoot from concealment. If it were a semi-auto, the first shot would fire and then the slide would more than likely become stuck or catch inside your pocket. The 638’s action revolves the cylinder inside its frame and can offer continuous fire from inside the close quarters of the newly ventilated jacket pocket.

The model 638 is offered from S&W with a few custom options such as pink rubber grips instead of the standard black as well as a laser grip module from their partnership with Crimson Trace. In low light, across the room distances, the laser grip may be your best option. In any case, just remember, this small gun does take a lot of dedicated practice to shoot well. Some have wrote calling it the “expert’s” gun, but I would not go that far. I have seen many shooters devote time practicing with the pistol and quickly become very efficient with it.

If you are a professional who carries an issued gun full time and you’re looking for a solid back-up option, I would suggest looking into the model 638 for yourself to see the reasons why it has stood the test of time. For those simply looking for a solid gun for the car, specifically lightweight carry pistol or even a back-up to your “go-to” gun when it all goes south, you can’t beat the reliability of a revolver. My suggestion is to make it routine to also carry a reload option in either a speed strip or speed loader in addition to a quality knife. With only five rounds and slow reloads, you may want to consider other options as you work through your force continuum. Until next week, Train Hard and Continue the Fight!