We live in a fantastic age to be firearms owners, particularly in regard to the AR-15 platform. Never before have we had such immediate access to new, innovative products and versatile accessories.

However, one of the of the biggest advantages the standard 5.56 NATO/.223 Remington AR-15 possesses is also one of its most original: a laser-like trajectory. As we all know, this flat-shooting cartridge is ideal for an overwhelmingly broad variety of applications.

But, this trajectory is only “laser-like”, and unfortunately, the laws of gravity still affect even the speediest of cartridges. Because of this, it’s helpful to have a fast, efficient means of compensating for a cartridge’s drop past its point-blank effective range. And this is where Nikon Sport Optics steps in.

Nikon has made major inroads with the firearms industry in years past, and truthfully can no longer be considered “just” a camera company. Their extensive line of riflescopes has proven to be quite popular within the shooting community, and for good reason: Nikon provides many desirable features, and at a price point most of us can afford. 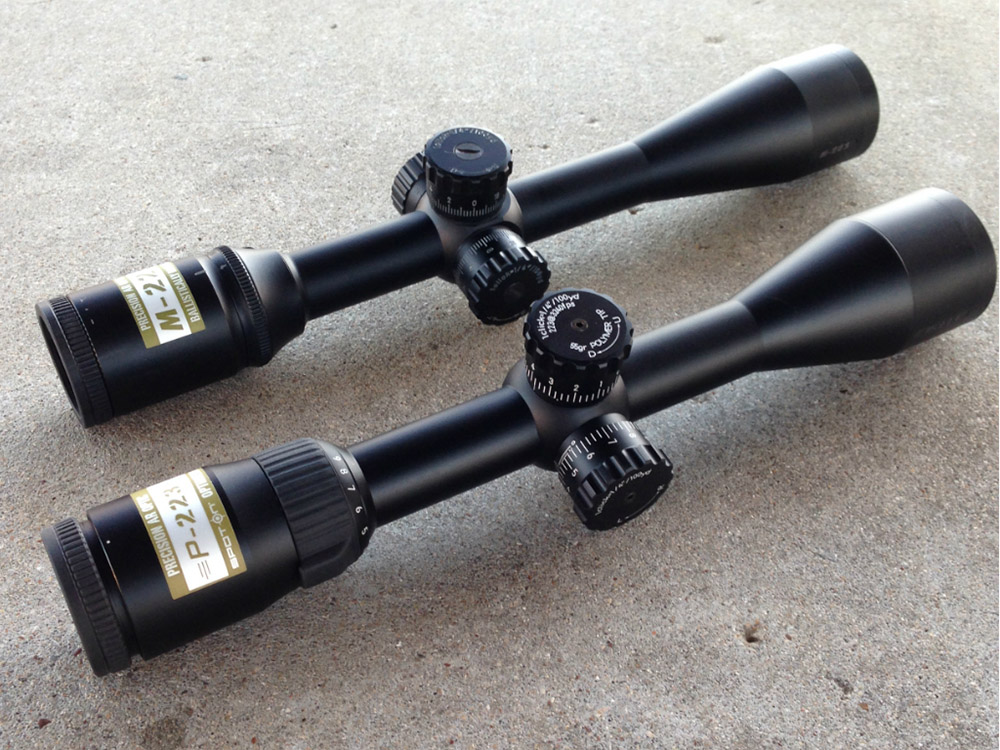 Two of their most popular brands are specifically designed for AR-15-style rifles in standard chamberings: The Nikon M-223 scope and Nikon P-223 scope. While offering similar basic feature sets and capabilities, the M-223 line technically ranks above the P-223 brand in several notable ways. But, most importantly, both are available with Nikon’s extremely functional BDC 600 reticle.

This unique reticle permits fast compensation for the trajectory of the .223 Remington cartridge at distances out to 600 yards, all without any external scope adjustments on the shooter’s part.

You can have the finest optic in the world and the most accurate rifle in production, but if they aren’t attached with a solid set of rings, you’re going to be doomed from the start. For this particular review, I selected Nikon’s M-223 single piece scope mount. It’s designed specifically for use on AR-15 rifles, just like the M-223 and P-223 scopes are. 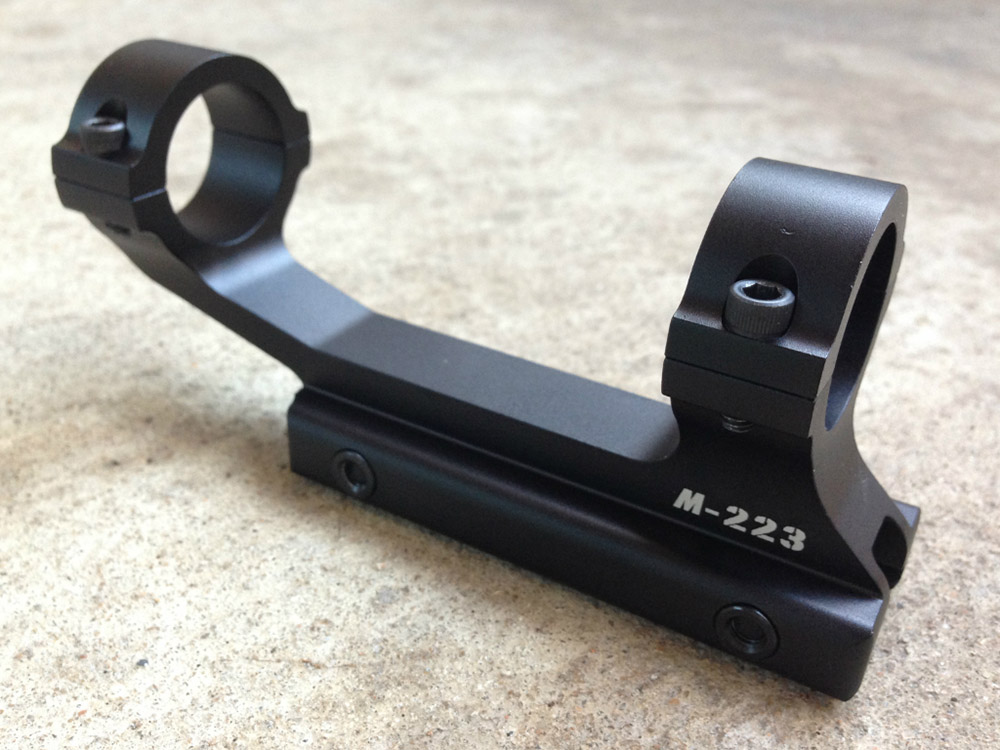 The M-223 mount is machined from a single piece of solid aluminum, and secures to any standard Picatinny rail via twin through-bolts. It features enough of a forward-offset cantilever to permit correct head positioning, all while maintaining enough adjustment fore and aft to get the correct eye relief dialed in. There is no built in MOA/MIL angle, which makes it perfect for use with the Nikon BDC reticle.

All wrenches required for mounting are included with the scope base, so putting everything together is as simple as clamping the optic in the rings and then securing the assembly to the upper receiver. Because it’s a one-piece base, it has to be slid on from the front or the back, instead of being “rocked” on like other mounts. The entire Nikon M-223 mount set-up is solid, simple, very lightweight, and would be a fine choice for nearly any 1” AR-15 scope. It’s a great fit for the M-223 and P-223 lines.

Physical Description/What’s In the Box

Both the M-223 and the P-223 come packaged in secure boxes, and include comprehensive, clearly-written instruction manuals detailing the usage of the BDC 600 reticle. Spring-loaded, flip-up polymer scope caps are included with the M-223, and the P-223 features a functional bikini-style lens cover. The M-223 flip-ups are far easier to use than the P-223 lens protectors, and are a very nice upgrade. 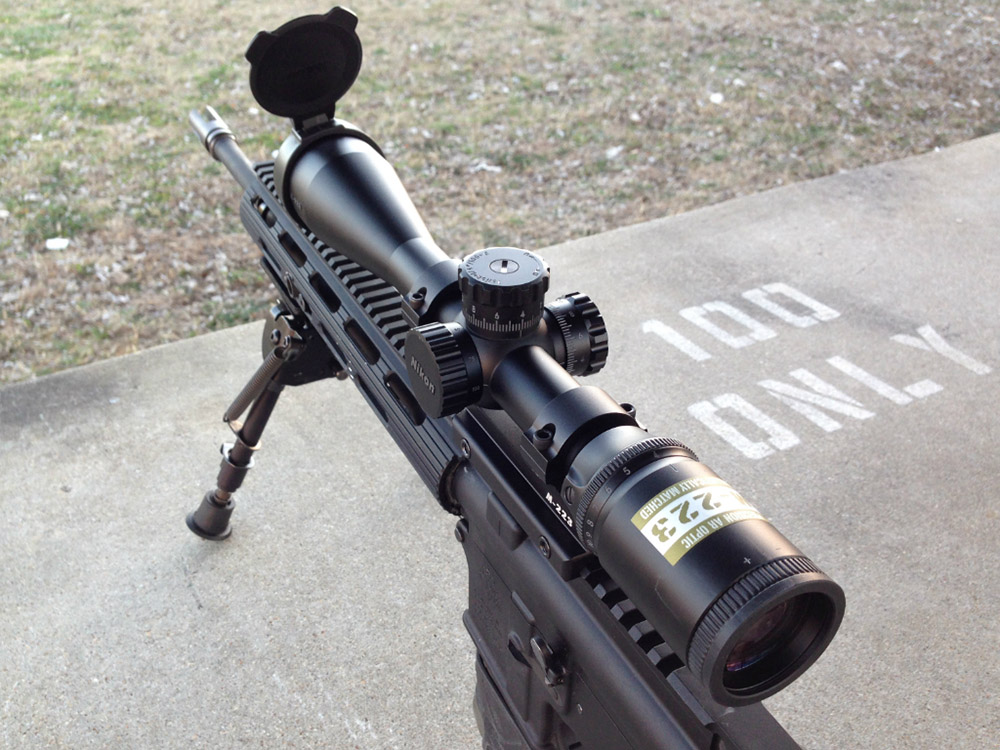 The M-223 also includes a soft lens cloth and a KillFlash ARD. This Anti Reflection Device is designed to thread directly into the front objective lens housing of the optic, and reduces the shooter’s visual signature under certain lighting conditions. It does this with a thick aluminum honeycomb material, which makes it impossible for light to reflect off the lens while still providing a clear view straight through. Installing the ARD eliminates the possibility that a sharp-eyed predator might see the lens reflected in bright sunlight. 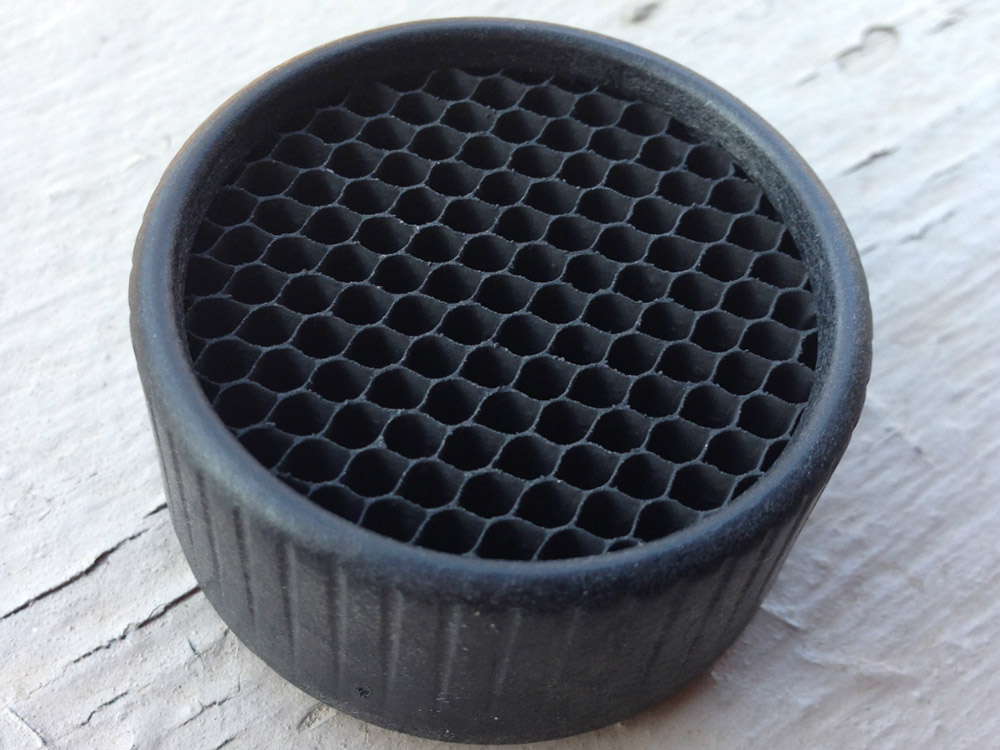 It’s important to note that the forward flip-up cap isn’t compatible with the KillFlash. However, since the lens is covered by the thick aluminum mesh when the device is in use, it’s not a big deal. 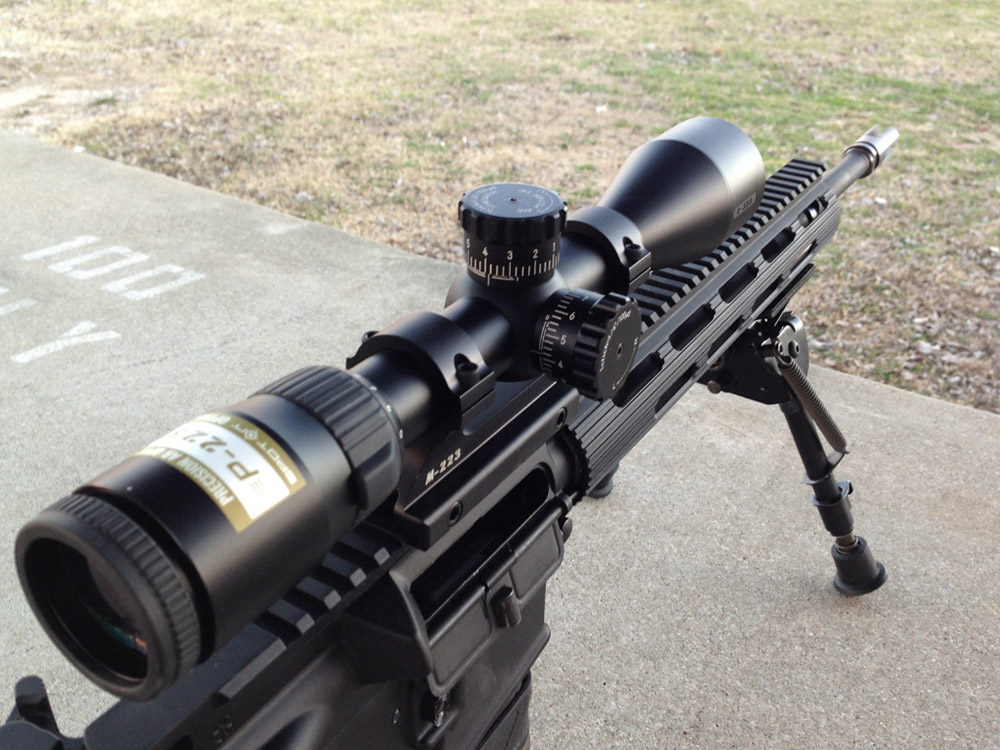 These are both attractive scopes with deep matte-black finishes, well-executed accentual details and an overall great built quality.

The M-223 and P-223 are both built around the Nikon BDC 600 reticle, and are calibrated specifically for the .223 Remington cartridge. While these scopes really shine on an AR-15, they will work on any rifle chambered in .223 Remington, and will provide accurate drop compensation out to 600 yards.

Out of the box, the BDC 600 is designed to work with a 55 grain polymer tipped bullet moving at a respectable 3,240 feet per second, and the entire system is based off of a standard 100 yard zero. 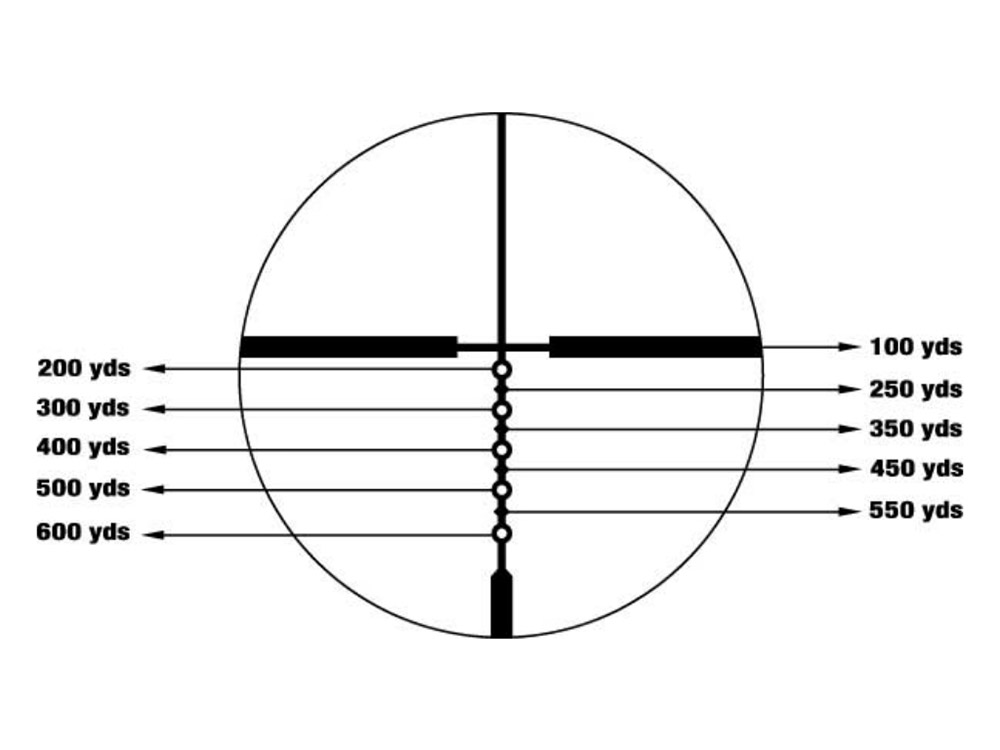 Of course, the true drop values of the BDC 600 reticle will depend on a variety of external variables, such as your altitude, temperature, humidity, barometric pressure, and actual muzzle velocity. It’ll get you close to the right amount of vertical correction, but for the most accurate results, it’s best to call in the expert: Nikon’s Spot On website.

This valuable resource is the key to taking full advantage of the BDC 600 reticle, and it can help shooters find exactly how their unique load measures up against the holdover marks. The input variables on the site are extremely detailed, which in turn translates to high degree of accuracy downrange. Even if you’re lucky enough to have your load and velocity match up to the aforementioned specifications, you’re better off punching all of your unique conditions into Nikon’s calculator to get the exact numbers.

These are both second focal plane scopes, which means that the above pictured BDC reticle hold overs are only true at the highest magnification setting. However, if the holdover values at different magnifications are desired, the Spot On website will also calculate these for you.

As a side benefit, the BDC 600 reticle for the .223 Remington is also quite compatible and usable with the .308 Winchester. Check the Spot On calculator for exact details on your cartridge and precise holdovers.

No doubt about it, the BDC 600 reticle is a powerful tool for longer-range shooting tasks, especially when paired with Nikon’s online software.

Both scopes feature a very favorable eye relief of right around 4”, as well as adequate eyebox fields. While the eye relief does indeed stay constant as the zoom level increases, the usable eyebox shrinks significantly towards the top end of the magnification.

This is to be expected to some degree with any rifle scope, and the M-223 and P-223 provide enough eyebox wiggle room to make conventional shooting positions easy and comfortable.

If there’s one thing Nikon rifle scopes are known for, it’s their glass quality. And the P-223 and M-223 didn’t disappoint. Edge-to-edge clarity was excellent in both scopes, although the M-223 definitely gets a nod for brighter colors and overall better image and glass clarity.

That being said, the images presented by both of these optics are quite good for the prices paid. Installing the ARD on the M-223 made the image noticeably darker in the evening hours, but there’s some give and take here when reducing the objective lens’s visual signature.

One of the big advantages that the M-223 offers over the P-223 is a locking left-side parallax adjustment. By pulling the knob out, parallax can be set for any distance between 50 yards and infinity. The P-223 simply features a fixed, yet functional, parallax at 100 yards. 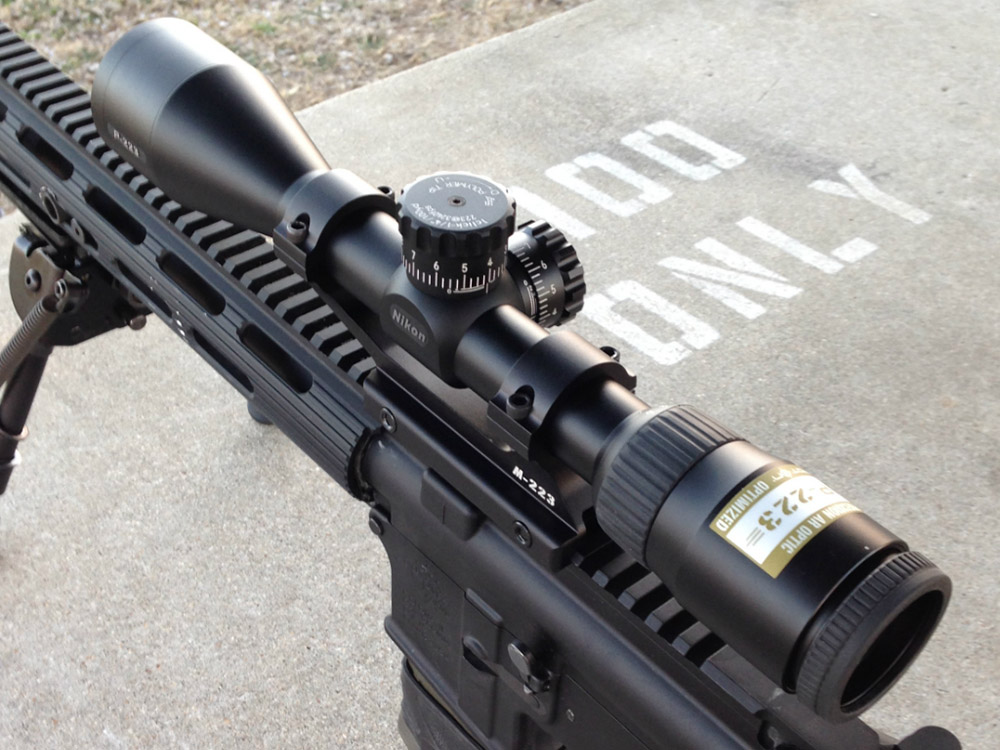 The zoom rings also differ on the two scopes. Power is adjusted on the M-223 via a sculpted, knurled aluminum ring. Twisting the rubber-coated power changer on the P-223 gives a slightly better purchase during the full rotation of the ring, and is easier to use with gloved hands.

Both scopes allow the shooter to bring the BDC 600 reticle in to tack-sharp focus via a rear-mounted adjustment ring. One complete turn on the M-223’s reticle focus knob swings it through it’s entire adjustment range, while the P-223 takes nearly two turns to do the same thing.

Neither scope stood out for better or worse in these areas. They are both extremely usable and well-built. The fixed parallax on the M-223 is nice to have at longer ranges, but the P-223 is still quite usable.

This is yet another feature where the two optics differ. While both the M-223 and P-223 adjust the point of impact by .25” per click at 100 yards, the M-223 offers 20 MOA of adjustment for a complete revolution. In contrast, the P-223 will only give you 12 MOA for the same single rotation. Furthermore, turret movement is very firm and distinct on the M-223 as compared to the P-223, although both are tactile and audible. 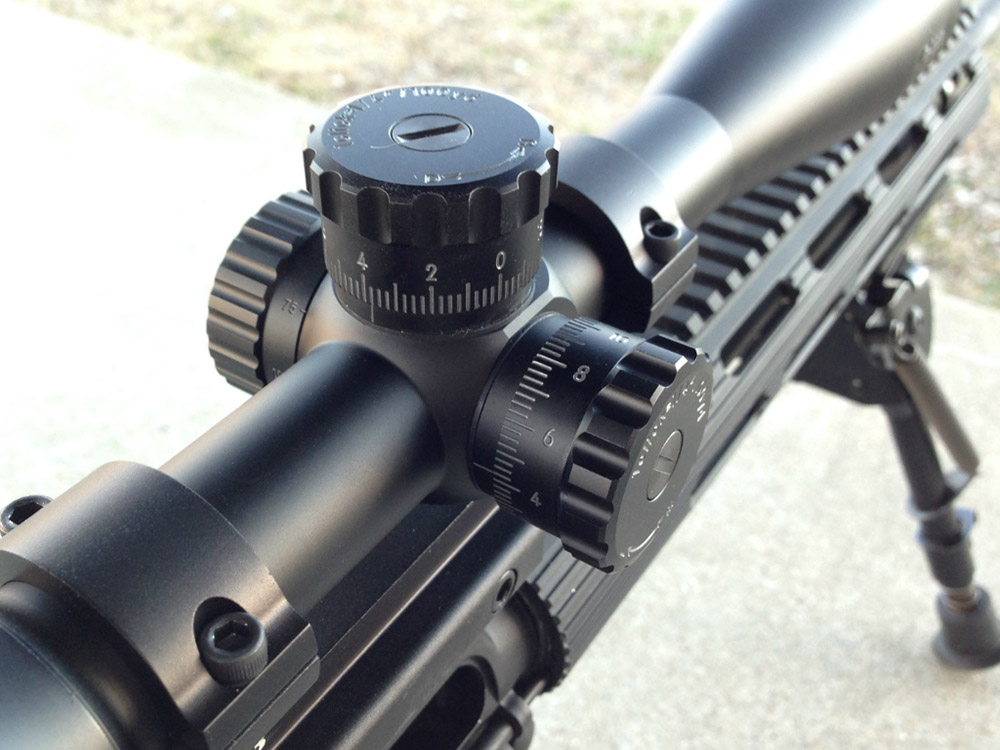 The P-223 and M-223 line both include tool-less resettable turrets. By simply pulling up on the target knobs, they can be rotated freely to the zero mark without influencing the internal adjustments. On the P-223, a spring pulls them back down and provides a means of resistance to keep them in place. The M-223 has a stiff detent that does the same thing, and its turrets are not spring loaded as a result.

One of the most reliable indications of how well a rifle scope’s turrets “track” on target is the traditional box test. In this test, the optic is zeroed at a specific distance (normally 100 yards), and the knobs are turned a pre-determined amount to “walk” the group around the target in a (hopefully) predictable manner.

Boresighting and initial zeroing on the P-223 and M-223 was done at 50 yards, and took multiple trial and error shots to finally get everything centered. Moving to 100 yards, the process again took about 10 rounds for each scope to finally get settled in for the tracking test.

Unfortunately, the optics didn’t do so well here. Throughout the test, neither scope tracked true to the adjustments marked on the turrets, and the M-223 was actually worse in this regard. Each side of the test boxes measured 8”, and the M-223 jumped ahead progressively in each direction by approximately 3”-4” when dialing the changes. The P-223 showcased the opposite effect, and lagged behind by 2”-3”.

Obviously, this isn’t ideal. Manually dialing in my test scopes at longer ranges would be quite difficult with unpredictable settings, and getting a solid zero took some time. However, it’s important to keep this fact in perspective and in line with the purpose of these optics.

Expecting rifle scopes in this price range to track up and down like a purpose-built long-range rifle scope is slightly unrealistic. And, after all, the M-223 and P-223 are specifically designed to take advantage of the BDC 600 reticle.

So, which of these two Nikons is best for you? Naturally, it comes down to your specific application. For longer-range shooting to the limits of the .223 Remington cartridge, the M-223 4-16×42 definitely is the choice to go with. Features like the side parallax adjustment, higher magnification, and enhanced glass quality are going to give you advantages at greater distances that the P-223 just can’t.

That doesn’t mean the P-223 has no place on an AR-15, however. Far from it. If your plans include closer-range varmint whacking (inside of 300 yards, for instance) the P-223 would be a fine choice. That isn’t to say that it can’t take full advantage of the BDC 600 reticle, but rather that the fixed parallax, lower relative glass quality and lower top end magnification will make things harder on the shooter as the distance increases. 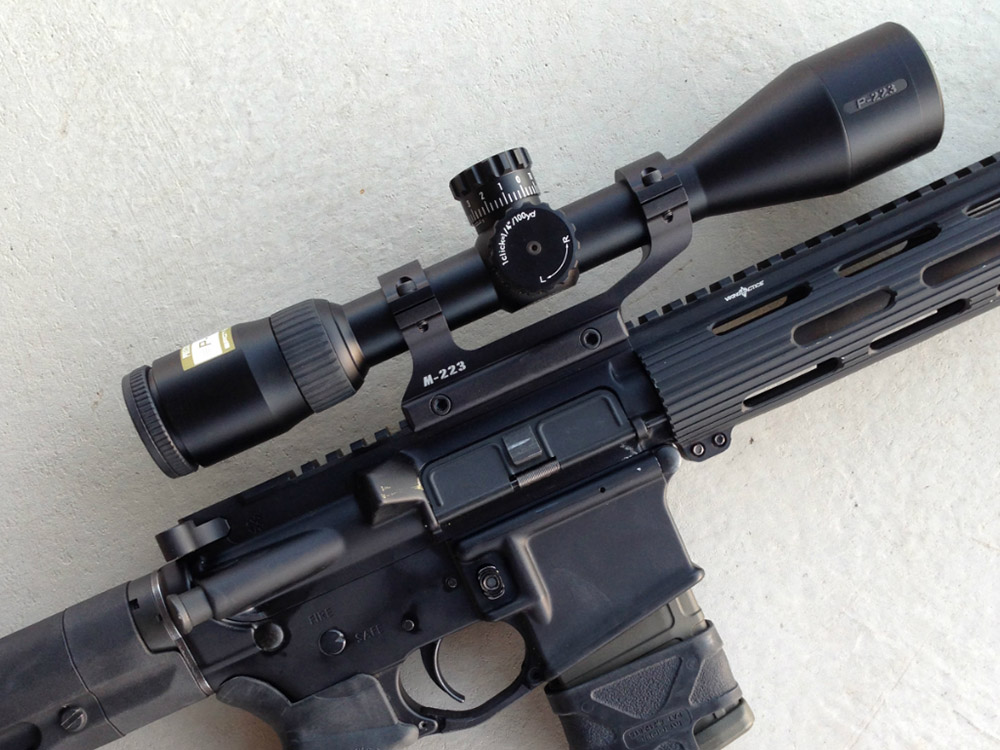 Yes, it’s true both of the scopes had issues tracking during the box test. This isn’t at all uncommon with the lower-priced optics in this class, and it’s simply not realistic to expect or demand fraction-of-an-inch precision from them. Zero your scope, don’t move the turrets, take full advantage of the BDC 600 reticle, and you’ll be well served by the Nikon P-223 and M-223 lines.

If your shooting requirements include constant manual windage and elevation adjustments, such as in a specific long-range precision role, you’re probably better off seeking other options.

For everybody else, the M-223 and P-223 lines offer sharp imaging, effective reticle designs, well-thought out controls and a winning price point.