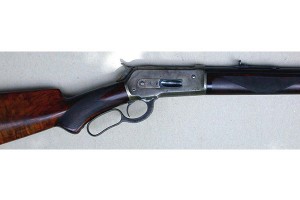 As the Civil War was winding down, it appeared that the states would stay united. More and more settlers were migrating west to escape the decimation of the south. Family after family that lost everything in the war were forced to start over. For many of these families, moving west was their best option. As they went west, they took with them the items necessary to survive in unknown lands.

The people of the 19th century viewed guns very differently than we do today. For them, having a firearm was not a luxury or a hobby, on the contrary – it was a necessity. Many of these people were still largely hunters and gatherers. Living off of what the land provided them. Having a reliable firearm to provide for them was not something anyone questioned it was their life. It was as important as a mule or cow.

They had to have the gun to survive. Period.

As they moved and began settling, firearms manufactures were scrambling to meet the new demand of the western expansion and resettling of the south. Along came a group of men led by the finances of Oliver Winchester. Winchester partnered with Horace Smith, Dan Wesson and Benjamin Henry to begin making a new cartridge and firearm. Just before the war Henry designed a lever action rifle that would help the Union army defeat the South. After the war, the .44 Henry was redesigned and made into the more powerful .44-40. Which essentially is a .44 magnum bullet propelled by 40 grains of black powder. The .44-40 became the cartridge of the west and later when chambered in the 1873, it was the most popular cartridge for the men and families of the westward expansion of the late 19th century.

When Colt began making their military service revolver in the same cartridge, it meant that for the first time, a man could have one cartridge for his rifle and revolver. This combination proved to be an unstoppable force in the repeating rifle.

The Model 1873 was one of the most successful Winchester rifles of its day, gaining the reputation as “The Gun that Won the West.”

Still an icon in the modern day, it was manufactured between 1873 and 1919. Originally chambered for the .44-40 cartridge, it was later produced in .38-40 and .32-20, all of which were also popular handgun cartridges of the day, allowing users to carry just one type of ammunition. The Model 1873 was produced in three variations: a 24-inch barrel rifle, 20-inch barrel carbine, and a “musket” (a term that, at the time, denoted a full length military-style stock, not to be confused with a true smoothbore musket). The easy to transport and handle carbine was the most popular, while the musket accounted for less than 5–10 percent of total production.

In all, over 720,000 Model 1873s were produced, easily making it the most popular rifle of its time and still highly sought after.
As the popularity of the 1873 began to wane, Winchester solicited the assistance of John Browning to help design a newer version of the coveted lever gun. The most popular and recognizable being the 1894 lever gun.

Browning’s design became the most prevalent of the Winchester repeating rifles. It was first chambered in the .32-40, and but a few years later a variety of new calibers were added including the .30-30, .32 Winchester Special, and the .38-55 Winchester.

The Winchester 1894 went on to becoming the best-selling hunting rifle of all time. Selling over six million units before production was stopped in 2006. Some have argued that more North American big game has been taken with the Winchester model 1894 in .30-.30 than any other rifle. Certainly this cannot be proven, but the numbers are staggering when you look at how many Model 94’s have been sold and used in hunting. Personally, my first deer rifle was a Winchester 1894 in .30-.30. Weighing in at nine pounds, this octagon barreled version was a joy to shoot. One of only three guns I sold in my young and dumb days before I knew what I had.

The ability to load a smokeless powder cartridge into a tubular magazine that could hold as many as fifteen rounds on the full version enabled the average man to have one gun that would do everything he needed.

Without question the Winchester lever gun was a gun that revolutionized the firearm industry. It was the right gun at the right time – affordable, reliable and handsome. The Winchester 1873 and 1894 are still some of the best sought after lever guns on the market.

Modern shooters complain about the top ejection of the 1894 preventing the mounting of optics due to the action required to eject a spent round. This feature is something that Marlin Firearms fixed with their lever guns offering a side ejection.

Still, the Winchester lever guns of the 19th century are handsome guns that shoot well and are very reliable. If you are looking for a lever gun that changed the west, shot buffalo, or protected families of the prairie and beyond, look no further than the Winchester 1873 or the Winchester 1894. You cannot go wrong with either choice.

Image one and thumb and two courtesy of Wikimedia Commons.