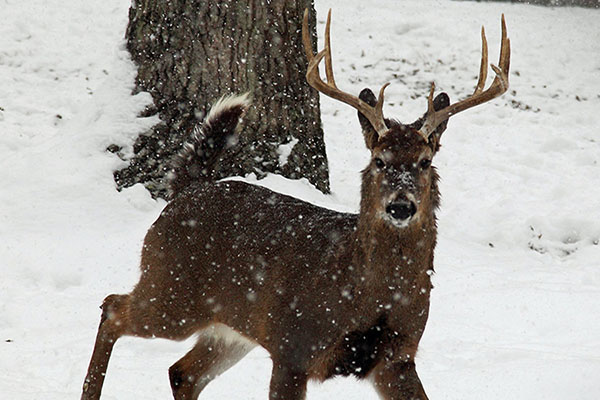 Chronic Wasting Disease, or CWD, is a neurological disease that effects many of the animals that hunters prize like whitetail deer, mule deer, elk, and moose. While hunters may never encounter an animal with CWD in their lifetime, they could just as likely run into one hunting in areas like the Midwest or the Rocky Mountains. The causes and effects of CWD are still being researched, and while some studies suggest that humans are immune from transmission of the disease, others maintain that CWD is possibly very dangerous to humans. We aren’t qualified to weigh in on whether or not CWD is dangerous to humans, but like Mad Cow Disease, CWD is a scary thing that is best avoided if possible. Let’s go over the basics of CWD, how animals who have contracted it behave, and what you can do to protect yourself from the uncertainty that CWD exposure brings.

CWD is a subject of intense study in conservation these days because it potentially threatens deer populations all around the US. A jump in transmission rates could mean the end of deer hunting as we know it, and it could mean the complete destruction of these majestic animals that once roamed all of North America freely. While we don’t have to grapple with such a threat right now, it is believed that CWD was once confined Northeastern Colorado, Southeast Wyoming, and portions of Nebraska, but now the disease has spread to many other places in North America like the Midwest and Canada.

CWD doesn’t work quite like a bacteria or a disease, but rather it is thought to be carried by Prions, which are simple misshapen proteins without DNA or RNA structures. Without getting to detailed, what this means is Prions aren’t fully understood, and any potential disease spread by Prions demands our utmost respect. Prions initially effect portions of the brain, and CWD shows the same symptoms in infected animals with the brain being the initial point of infection and symptoms then extending to the nervous system and eventually the muscles. How animals contract CWD is not fully understood at this time.

CWD is always fatal once contracted, and animals who have CWD demonstrate tell tale signs of infection that every hunter should be able to recognize. CWD begins with slow and gradual weight loss in the animal until they die. While a bad season or a drought can effect the deer population’s general weight, CWD becomes much more obvious as it progresses, and the deer will appear sickly and thin. In addition to gradual weight loss, deer also exhibit symptoms like walking in circles, exhibiting blank eye and facial expressions, excessive salivation, poor posture and a constantly lowered head, and a smell resembling that of rotting meat. Generally speaking, when a deer or other animal with advanced CWD walks in front of your stand, it should immediately appear like something is very wrong with the animal.

What This Means For Hunters

The link between consuming CWD infected meat and transmission to humans has never been proven, but we’ll be the first to say this is nothing to ever take a chance on when hunting game. Since the symptoms of CWD are so outwardly visible, you should absolutely let the deer pass. This is not a situation where you should “put the deer out of its misery,” and some studies suggest that the disease can even be transmitted by infected soil. If you see a deer you suspect is infected, do not disturb it in any way. Once you get to your cell or house, contact your local DNR branch and inform them of what you saw. This will allow qualified authorities to address the situation properly.

Like any disease, there is an incubation period for CWD once a deer contracts it. You should absolutely always protect yourself from potential infection even when you’ve shot a deer that appears to be normal. First off, always wear rubber gloves when field dressing or processing any deer or related animal. This is a general rule you should always follow from now until your hunting days are over. Unfortunately, the days of using every portion of the deer are over. The Native Americans didn’t have to deal with CWD, but things have changed these days. You should now adopt a system where you never touch the brain or spinal cord, but the eyes, spleen, tonsils, and lymph nodes are also off limits. Wash every portion of meat you intend to consume thoroughly, and when boning out meat avoid cutting through any bone, and try to leave every bone in tact while extracting meat.

Quality clean up is also of the utmost importance, and you should sterilize all your instruments, wash your gloves thoroughly before disposing of them, and finally give your hands the hospital wash treatment all the way up to your elbows afterward. Finally, many hunters don’t think of it, but when you take your deer to the processing plant, request that it be processed separately from other deer. You don’t want a irresponsible hunter’s meat brushing up next to your carefully harvested meat. Make sure the processing plant knows you’re serious about this matter. You may have to pay more for the privilege, but this truly is a better safe than sorry situation.

Do we sound paranoid about CWD? Perhaps we’re advocating over the top preparation and caution when it comes to handing wild meat from deer and related animals. Yet history has shown that diseases mutate, and worse yet, we don’t fully understand how the disease works in its original form right now. Do you really want to take chances on contracting a disease that scientists don’t fully understand? The answer is always a resounding no. Hunters all around North America should know and prepare for CWD. Welcome to hunting in the 21st century.

Image one, two and three and thumb all courtesy of Wikimedia Commons.