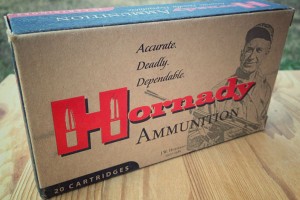 Hornady is well known for their zero-compromise attitude when it comes to bullet design and construction. Does the same hold true when those same bullets are loaded into their Hornady Match Ammunition line? Let’s take a look. First, the details:

We’ll go through the Hornady Match 308 Winchester ammunition component by component, then take a look at groups at varying distances. 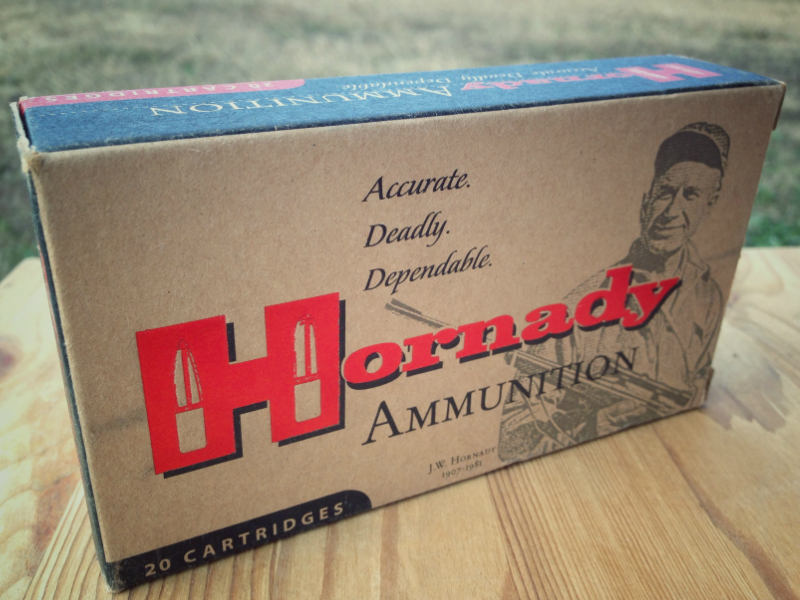 There really isn’t much to say about primers. But like all Hornady products, the primers inserted into the Match line are some of the best available. Each primer type is selected to complement the rest of the cartridge’s composition. The primers are silver in color, and none of them failed to ignite a powder charge.

Like most commercial ammunition, the primers are not sealed or crimped in place.

The brass cases on Hornady Match ammunition get a little bit of extra attention at the plant. Each one is hand selected for production based on the following criteria:

These specific areas ensure that bullets are seated properly, and that chamber pressures are held to a consistent standard for the best velocity window and repeatable precision. To check the veracity of these claims, I weighed out 100 once-fired cases to see how they compared:

Brass featured a minimum weight of 160.2 grains, and a max weight of 166.6 grains. As we can see above, a large percentage weighed within one grain, plus or minus.

If we assume that the outside of the brass casings are all identical and made to the correct spec (and outer dimensions should be very close after firing through the same chamber), then any case weight variations stem from internal dimension discrepancies. These internal variations can lead to different pressures (and velocities) when firing, so it’s best that they are kept to a minimum.

The powders in Hornady match ammunition are all caliber-matched to each load for best possible burn rate, pressure curves, and consistency of velocity. 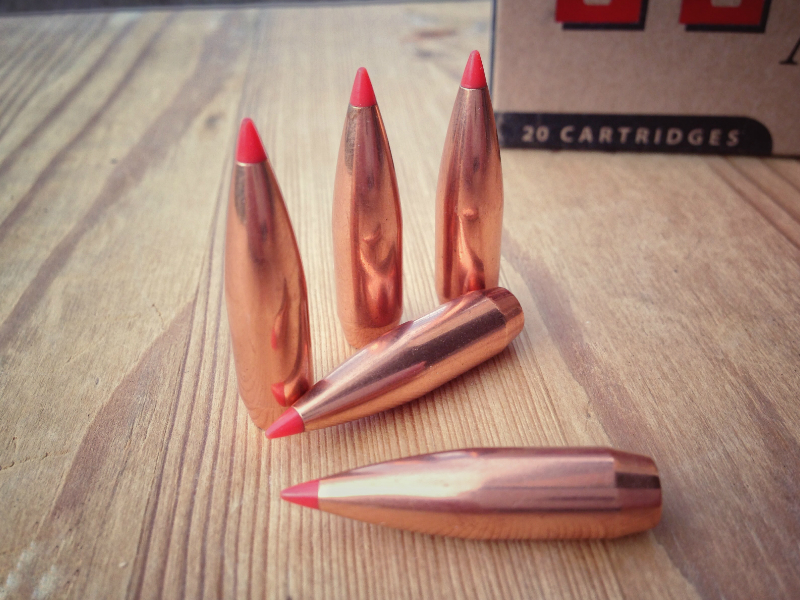 This particular load featured the excellent 168 grain AMAX bullet, with the AMP jacket. These jackets were designed to provide “near-zero wall thickness variation.” This provides an exceptionally concentric and uniform bullet jacket.

An easy-to-replicate polymer tip continues this theme of consistency. It’s much easier to produce a uniform polymer tip than one formed from the jacket. A boat-tailed design provides further ballistic efficiency, culminating in a G1 BC of .450.

Running 10 of the 168 grain AMAX loads over a chronograph in 68 degree weather provided these results:

This works out to an average speed of 2547 feet per second out of the 18” barrel on my Ruger American Predator rifle. The factory data indicates that the load should clock in at 2700 FPS from a 24” barrel, so real-world performance loses about 20 FPS per inch with this particular load out of my barrel. Pretty normal.

The Hornady Match 308 Winchester gave me a velocity standard deviation readout of 26. To give you something to compare this to, elite handloaders attempt to achieve a SD in the single digit range. The Hornady ammunition hovers above that mark, which is to be expected.

Just to give you a non-match comparison, ZQI M80 ball gives me SD of 42, taken over 10 shots from the same rifle.

Of course, all of this is merely academic if the ammunition won’t shoot well. To check the accuracy (technically, the precision) of the Hornady 168 grain Match cartridges, I fired two 10 shot groups: one at 100 yards and the other at 600 yards.

Conditions were favorable for both groups fired, but a bit on the chilly side weather-wise (45 degrees F). Both groups were fired from bipod-prone with a rear sandbag, using a SWFA SS 10×42 optic on a Ruger Predator rifle. 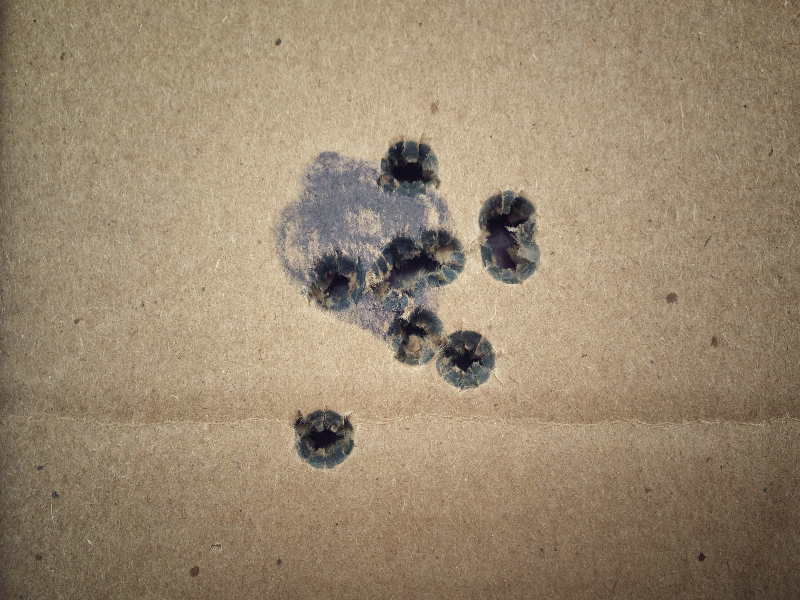 The next group was fired at 600 yards, on an NRA B8 replacement center. The black 9 ring on a B8 is 5.5” across, so it measures a little less than 1 MOA at 600 yards. The 600 yard group had an 8” vertical spread, and a 12” horizontal. I wasn’t doing anything to try and compensate for the very light cross breeze, and it only moved the group ~6” to the left. 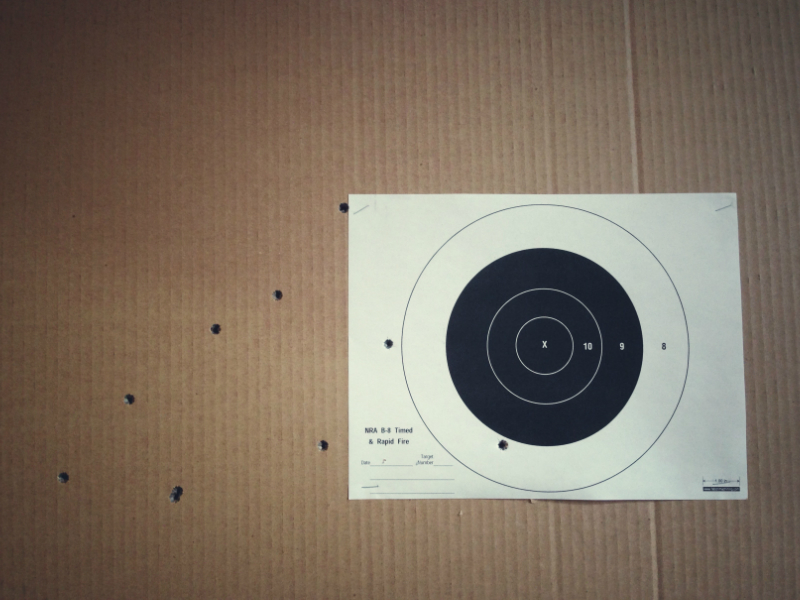 Is Hornady Match Ammo Worth It?

For many shooters, match-grade ammunition is associated with a match-grade price. Performance isn’t free. Whether you buy or handload match ammunition, it’s going to cost more than run-of-the-mill blasting ammo.

I reload most of my ammunition, with the goal of achieving a quality result while getting the cost per round down. But how much can you really save by duplicating the performance of good factory stuff (like the Hornady Match) via handloading?

Using Hornady components and Varget powder, it would run you around $23.20 for a box of 20 reloads. By contrast, average sticker price on a loaded box of Hornady 168 grain Match comes to $27.49.

That difference quickly disappears once you factor in your time spent creating and testing match-level loads. Granted, the price of handloads goes way down when you factor in reusing brass. But, starting from scratch, you aren’t saving much by rolling your own.

I’m guessing (based on experience) that reloads would shoot a little better than the Hornady match ammunition, perhaps by a fraction of an inch or two. Is it worth the time spent at the loading bench? That’s up to you.

Performance by the Box

If you define “match” as ammunition shooting near 1 MOA for 10 shots in real-world conditions, Hornady Match ammunition certainly lives up to its name. There’s also a great value here, for sure.

Pick up a couple of boxes, sight in your most precise rifle, and you’ll be ready for anything from a long range steel match to next year’s deer season.