Skip to content
blog.GritrSports.com > Conversations > The Guns of a Federal Agent – Pistols
Conversations 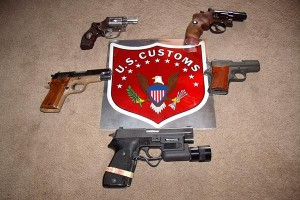 Do you need a Custom gun, a Customized gun, or a Stock gun for personal defense?

For 27 years I was a Criminal Investigator (Special Agent) for U.S. Customs Investigations (now I.C.E.). My career spanned the time from revolvers only to only semi-autos. Along the way I carried stock, customized, and a custom-made handguns. For 25 of those years I was a Firearms Instructor, and for 9 years I was the Lead Firearms and Officer Safety and Survival Instructor at our Western Academy. So I have an informed opinion about which types of guns are needed for personal protection.

A stock gun is exactly as it comes from the factory, with whatever grips, sights, and trigger pull the designers put on it. Open the box, clean it, load it, and carry it! (Well, after you train with it of course!)

A custom gun is just that – something not available over the counter, built just for you. It should precisely meet your needs – and your wants. You want a titanium trigger in purple, get it! You want a particular shade of light green front sight? Go for it! You long for a two stage trigger pull, you shall have it! A 3.75” barrel floats your boat? It shall be done!

A customized gun is a bit harder to define. They range from those builders who offer a laundry list of options, as long as your wallet is deep, to the other extreme, where the shooter wants different grips, so he pops down to the local gun shop, buys the grips, and slaps them on, calling it ideal! Then there is everything in between. With most guns, there is a limit to how much home customizing you can do – there are not too many options for most of the polymer guns besides grip inserts, triggers, and sights. The two great exceptions, of course, are the M1911 pistol and the AR series of rifles, where there are a virtually unlimited number of options on the market. I have heard AR’s referred to as “Lego sets for men.”

I started out as a brand new Agent with the then standard Smith &Wesson M36 Chief’s Special. 5 rounds of .38 ammo seemed completely sufficient at the time. Two weeks after I started, my first paycheck went for an upgrade – to a S&W M60, the same gun in Stainless Steel.

By the way, the issue ammo back then was the round nose lead 158 grain (known informally as the “stop, or I‘ll wrinkle your suit!” load), which somehow became 158 grain hollow points in my gun! We later went to the Winchester Q4070 load, a 110 grain Jacketed Hollow Point at an honest 1,000 feet per second out of my M60’s 1.9 inch barrel! In all cases, the gun is only part of the system, along with the ammo, holster, and training.

I “customized” my M60 with rubber grips from Pachmayer, and called it good. A later, unintended customizing was the product of buying my last cheap holster. Bullett starring Steve McQueen was the big movie, and he wore his gun in an upside down shoulder holster. So, I had to be cool and get one. Well, one day I was following a suspect, who cut through an industrial business, and jumped off the loading dock. I tried the same thing, and my M60 popped out of the holster and hit the concrete, neatly snapping the hammer spur off. I scooped the revolver up and carried on. Later I had the stub ground down smooth, and so it remains today. The holster went directly into a trash dumpster, and I never again bought a cheap holster!

Eventually, my agency decided to issue guns. We were still mired in the days of “everyone knows semi-automatic pistols jam,” so we were issued Smith & Wesson Model 19 .357 Magnum revolvers with 2.5 inch barrels, and match grade wadcutter ammunition to train and qualify with. Because one Special Agent, a well known gun writer of the day, liked to wear his gun inside his pants, he favored nickel plated guns. He had the ear of the Commissioner of Customs, so our M19’s were nickel plated!

A few words about the ammo – the .38 wadcutter was designed for bullseye pistol shooting. It was a 148g cylinder of lead, flat at both ends or sometimes with a hollow base, loaded over the lightest charge of powder that would reliably get the slug out of the barrel. It has little recoil, no flash, and is superbly accurate. Our service load was the aforementioned Q4070 load, which – in order to get 1,000 FPS out of a short barrel, had a 110g Jacketed Hollow Point bullet loaded in military thickness nickeled cases over a very generous powder charge. As a result, it generated LOTS of muzzle blast, and even on a bright sunny day there was a ball of fire at the muzzle about the size of a grapefruit! At night or indoors, it was very impressive. This was the very first +P+ load, by the way.

In order to save money, we were ordered to NOT shoot our service ammo, but to train and qualify with the wadcutters. After much complaining from the field, they loosened the purse strings and let us qualify & train with the service ammo. The very first time we shot up the service round, a very experienced long time officer fired his first round, and immediately dropped his revolver! He said “ MY GUN JUST BLEW UP!” – which it had not! He had never experienced the blast and flash produced by those service rounds. The lesson here of course is you need to shoot at least some of your carry ammo in practice.

I carried the issued (and only authorized) box stock M19 for several years, until the “head shed” said we could carry personally owned .38/.357 revolvers. I promptly bought a blue steel M19 21/2 inch (I really hated that nickel finish), and proceeded to customize it. First, it went off to Mag-na-port, to have ports cut into the barrel. These reduced muzzle flip, at the cost of even brighter flash and bigger blast. Next I bought a set of wood grips, to replace the two “splinters” S&W shipped on the gun. I sat down with my favorite gun, a 1911, the revolver grips, and a wood rasp and eventually ended up with a pair of grips that replicated the feel John Browning designed into that .45.

I then found that a local gent had come up with a way to illuminate the sights, called the L-Tronic sight system. This was decades before Tritium was available. His system involves a rechargeable battery inside the grips, and a pressure switch inlet into the grip. Tiny wires run to the front sight, which has an early LED embedded in it, and the rear sight where a spot of epoxy holds another LED that shines on the rear sight. Squeeze the grips, and the sights light up! Amazing!!

I carried this gun for a number of years, and a few outlaws got to see the front end of it. I also fired lots of service ammo through it. At some point we changed to 110g JHP .357 ammo, with even more blast and muzzle flash! I fired this gun and ammo in the early pre-IPSC combat matches, to keep my skill level up for “The Day.”

Eventually, I (and others) were asked to write our ideal firearms policy. I wrote that the agency needed to issue an “adequate” firearm, which the M19 was, but allow personally-owned semi-autos. I remember the exact circumstances when I got the word that my policy was adopted. I was on the phone talking with an agent in another office when I was given the new policy. When I saw that we could carry semi-autos, I told the agent I would have to call him back. It was lunchtime, so I drove home, locked up my M19, got out my STAR PD compact .45 and holster plus spare magazine, loaded up, and drove back to work!

STAR was a Spanish gunmaker, and the PD was their answer to the Colt Commander. It has an alloy frame, plus an adjustable rear sight and a different safety system. On a 1911, the safety blocks the sear; on the STAR guns, it disengages the hammer from the sear, to my mind a safer system. I had a red fluorescent plastic front sight added, put on some smooth wood grips, and carried it so long I wore the finish off the gun. A shooting friend was building an airplane in his garage, and offered to re-anodize the frame. He neglected to mention that he was doing his parts in gold, so I became “the man with the golden gun!” I still have and carry that gun.

My job as an investigator in San Diego made it hard to conceal the PD in the summer time, and still blend in with the fashions of the day. I had come to know a real gunsmithing artist, Tim LaFrance, who had just started making a true custom gun. He started with another STAR, this time the single action alloy framed BKM in 9mm. He trimmed the slide and barrel back, and cut the frame short to produce the “LaFrance NOVA,” with a 6 round magazine. The NOVA is about the same size as a PPK, but in 9mm rather than .380. It would easily fit in the front pocket of a pair of jeans, so I could dress like everyone else and still be armed. Today it is still in use, even under a tee shirt, with shorts and flip-flops!

During this period, we finally wore out so many of the M19’s that we switched to the Smith & Wesson 6906, a compact Double Action/Single Action 9mm with a stainless steel slide and matching anodized aluminum frame. We also became “retroactively incompetent” to carry single action semi-autos, after a supervisor had a negligent discharge while looking at an agent’s 1911. Of course the Supervisor could not be at fault, so that type of gun must be dangerous.

In the mid 1980’s I was assigned to our Academy outside Tucson as, among other things, the lead firearms and officer safety instructor. I immediately shifted to carrying the 6906, as I never wanted the new hires to see their instructor carrying something other than what they were issued. And my gun was absolutely box stock, exactly like the guns they were carrying. With 12 rounds in each magazine of the 147g JHP 9mm, I did not feel undergunned. But I did shoot that gun – a lot!

I transferred back out to the field, where the “DA first shot” rule was still in effect. As I was working along the border on an Indian Reservation, it was a very remote area. I already had another box stock gun, a SIG 220. So I set aside my 6906, and carried the SIG 220 in .45 – some of the bad guys in that area were BIG! There was also less need to conceal the gun, as we were virtually the only non-tribal members allowed on the reservation.

When I retired, I went back to the STAR PD and the NOVA as my principal guns, with occasional carry of a customized Browning High Power or stock S&W M&P, both in 9mm.

Continued in The Guns Of A Federal Agent – Long Guns And Custom Guns.