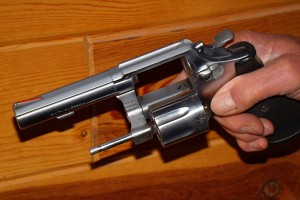 Whenever you are around firearms, there is a certain way they are to be handled, both for safety and as a matter of decorum. Some new gun owners have never been exposed to these methods, so a review is in order.

The first consideration and the prime necessity is SAFETY. Firearms etiquette always requires safety in gun handling, but it begins before you touch a gun.

NEVER touch a gun without asking permission from the owner! Some people simply do not want others to handle their guns. This may be due to their fragility, value, condition (loaded), or personal preference. It does not matter why, ALWAYS ask permission – in a gun shop, a gun show, at the range, or in someone’s home. ALWAYS keep the action open, and never close the action and/or pull the trigger without asking permission.

Rimfire and black powder firearms can be damaged by dry firing, even once! ALWAYS watch where the muzzle is pointed. Seeing folks ducking for cover usually means the owner will take the gun out of your hands, and ask – no, tell you to move along! Older guns with case hardened parts (a very hard surface treatment with a “softer” steel inside) can shatter if dry fired.  Some collectors prize their guns so highly, only those wearing cotton gloves may handle them to prevent rust issues.

ALWAYS assume the gun in loaded! There have been flintlock rifles hung on the mantelpiece for generations that were found to be loaded. Some folks have been caught loading guns on the tables at gun shows. And almost every gun shop has a BIG jar of ammo removed from “empty” guns. Check every gun, every time.

If you want to see the ammunition for the firearm, put the firearm down! It seems that live rounds somehow end up in the chamber, resulting in sudden loud noises and holes in things that do not need them! I have personal experience with this when a friend had just purchased a .303 straight pull rifle, and he then asked to see a round of .303 British ammunition. As I turned away, he “tried’’ the round in the action – and when he closed the bolt it “slam fired” (which it has never done since). The shot instantly killed my space heater, and simultaneously ended my intentions to serve in the Military –  they need folks who can hear in both ears! If you want to see how the firearm works, ask if you can meet the owner at a range, where the conditions (and people) are controlled.

If you are at a range, wait until the shooter has completed his shooting before asking to “see” his/her firearm. Never break someone’s concentration by interrupting their shooting. Usually, you will get a much friendlier response if you wait until they are done before striking up a conversation with them.

Different guns have different issues – here are some guidelines:

DO NOT slam break action guns – such as double barreled shotguns – open or closed, as it is hard on the action.

DO NOT “snap” a double action revolver cylinder open or closed – no matter how many times your favorite action movie star does it! He has folks on set with spare guns, in case the crane (or yoke – the part holding the cylinder) gets bent. Many times, they are not even using a real gun! Yes, just one time can bend it, requiring factory repair or replacement.

On bolt action rifles, some followers lock the bolt to the rear unless there is ammo in the magazine. DO NOT try to force it – go slow, and see why the bolt will not close.

NEVER try “fanning” or spinning a single action revolver just like on TV. If you drop it or break a part, you can seriously and irreparably reduce the value of the gun.

Always ask if how the owner handles the gun – does he/she “slap” the magazine in, or use the forward assist?  No matter what you were taught, it’s not YOUR gun!

Never, ever, adjust the sights unless the owner tells you it is OK – even if you are going to reset them. You will never touch any of his guns again!

If the gun you are looking at is a machine gun, they are handled differently. For starters, all of them are very, very expensive. It’s hard to find one for under $10,000! And even an accidental scratch can dig deep into the value. Magazines can cost $300 or more, so they must be handled carefully as well. If the gun fires from an open bolt, like a Thompson submachine gun, the safe way to handle them is to insure there is nothing in the chamber, and keep the bolt closed! This is contrary to all other firearms. Guns that fire from a closed bolt, such as the MP5, are handled just like semi-autos, with the bolt locked open. Some machine guns do not have any safeties – the M1919A4 machine gun is one. Once it is loaded, if you touch the trigger, it will fire – and fire, and fire, until you release the trigger or the belt runs out – all 250 rounds!  (Let’s see, at over $1/round, you are going to owe the owner some real money!)

On many full autos, the safety is counter-intuitive, such as the Browning Automatic Rifle – the famous BAR. Back is safe, forward is slow rate full auto fire, and back ½ way is fast full auto. Even the AK47 and 74 series are odd – up is safe, ½ down is full auto, and all the way down is semi. The Steyr AUG has a safety, but the fire control is in the trigger! An easy pull produces one shot, a hard pull produces full auto.

If you are given permission to try a few rounds in a full auto, there is a definite protocol for safety, and if you want to shoot more rounds.

With any firearm, one of the best ways to see how it works is to ask the owner if you can watch him/her disassemble it, and if you can clean it. With some guns, there is more than one way to take them apart. I can think of two ways to take a 1911 apart, and there may be two others. Everyone has their own preferences in cleaners and lubes, so use what they provide – but it’s OK to ask why they like XWY lube – just don’t argue with them about your favorite JHK lube.

As with most things in life, courtesy, interest, and admitting when you do not know something goes a long ways. I have been welcomed into collector’s homes to see their gun collection, and allowed to handle and fire some of the rarest guns anywhere, by following these guidelines.