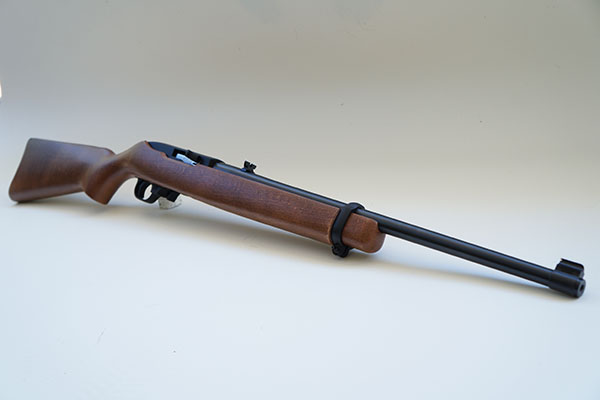 It’s no secret that perhaps one of the most versatile firearm platforms throughout the history of the cartridge era of ammunition is the .22 caliber rifle, but what keeps it so popular? One firearm leading the way in that category since its introduction to the market in 1964 is the classic Bill Ruger 10/22 semi-automatic rifle design. Not only is this rifle considered America’s sweetheart when it comes to plinking and small game hunting, it is also the basis for the widest array of variants and aftermarket items in the industry. With so many options available, it’s fair to say, the Ruger 10/22 is essentially the Barbie doll of the small arms industry. There are over 40 different variants cataloged by Ruger and their exclusive dealers alone! Companies like Volquartsen, Houge, Butler Creek, Green Mountain and Eagle Industries make the bulk of their profits just from this one model. 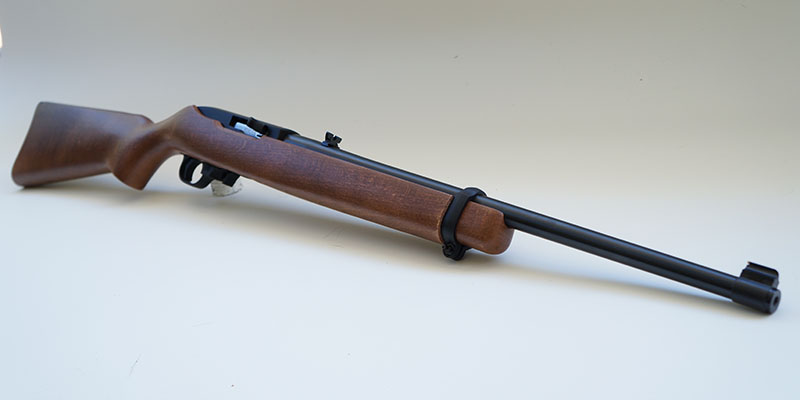 For a lot of shooters, their first venture into the shooting world was a basic wood and blued steel model Ruger 10/22 launching a 40 grain round nose lead projectile at around 1200 foot per second. The heart of this .22 rifle is a basic blow back bolt design with a modest, lawyer proof 6lb trigger and very reliable ammunition feeding system. Unlike most rimfire rifles operating between tube fed or cheaply stamped metal external magazines that are both prone to feeding issues, Ruger is unique in employing a 10 round, rotary style magazine that has over 60% less documented issues. The key to Ruger’s external rotary magazine’s reliability is a fined, spring loaded cylinder inside that allows each round to be stored individually instead of stacked on top of each other and allowing the rim of the cartridge to cause issue.

The overall size of the standard Ruger 10/22, which is often referred to as the carbine model, is very lightweight, coming in at an average of just at 5lbs unloaded. The rifle features an 18 inch barrel with a 1:16 inch right hand twist, well-suited for handling a wide range of .22 LR ammunition. Overall length of the carbine model is about 37 inches, giving the shooter roughly a 13.5 inch length of pull which is perfect for young shooters and adults alike.

Although the 10/22 is a great platform for a low range optic to be mounted, the carbine comes standard with a flip up adjustable rear sight matched with a very sturdy front sight featuring an easy to acquire brass bead to focus on before breaking your shot. These “iron” sights are great for snap shooting and moving through heavy brush to get to your favorite hunting spot. With the two most recent carbines sent on loan from Ruger for testing, they held very tight groups right out of the box at 15 yards. Within 4 groups of 3 shots each, both rifles were zeroed and ready for a day of plinking.

Putting Food on the Table

Probably my favorite application of the Ruger 10/22 is for hunting. The quick cyclic rate and quite report of the CCI 40 grain Hollow Point round allows for fast follow up shots on multiple furry targets destined for the crockpot. I have spent a good part of my life easing my way through the woods of North Carolina with my father and grandfather collecting grey squirrels and even a raccoon or two for dinner using a stainless version of the 10/22 with a synthetic stock. Now living in Florida, the terrain has changed to the backwoods swamps and Live Oak filled bayou seeking black squirrels and coyote. 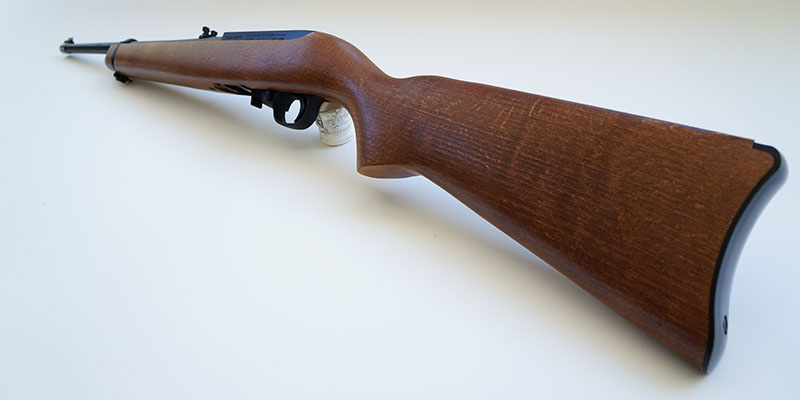 For those thinking the 10/22 is just for small and furry critters, I will personally vouch for the power of a well-placed shot. Several hunters I know draw tags to hunt alligators across the state of Louisiana as well as Texas each year. After fighting these massive 500lb – 700lb reptiles, these gators are quickly dispatched with a single shot from a hard used stainless steel 10/22 carbine to the top of the head before being hauled into the boat. Some of this country’s largest gators ever taken have been finished with the tried and true Ruger 10/22!

Tactical Training on a Budget

During my law enforcement career Deputy Sheriff, the training budget was always the red-headed stepchild of the county funding. Taking this into consideration, our department relied heavily on individual officer ingenuity to creative solutions on how we could literally get the most “bang” for our buck. Assigned to the department SWAT team as part of the sniper unit, I employed a personally owned Ruger 10/22 sporting a synthetic stock, highly accurate target bull barrel, bi-pod and 4-12×40 power scope to substitute for my .308 sniper rifle for certain training situations. While this substitution was not meant to take away from the needed data gathering gained by time on my actual duty rifle, there was a lot of long range reconnaissance and fire for effect in helping the entry team train. A lot of the entry team substituted standard Ruger 10/22 rifles for their issued AR 15 rifles to work on shoot and move drills. This of course was in the years prior to reliable AR platform .22 LR rifles to directly substitute and still train on a similar manual of arms. If given a choice today for a budget friendly training option, I would still stick with my Ruger 10/22 due to its time tested reliability and accuracy. 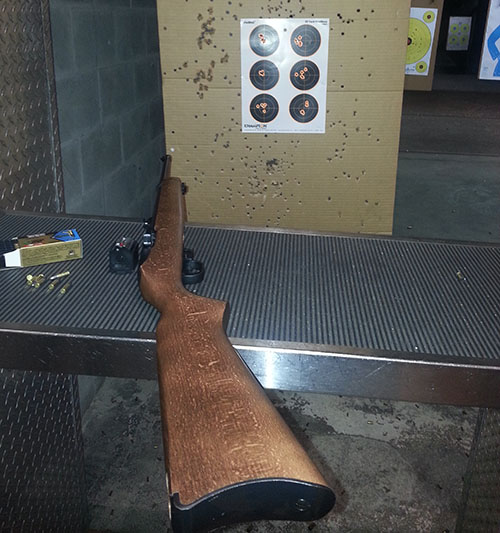 Now retired from law enforcement service, I teach civilian marksmanship through one-on -one training sessions as well as with a national non-profit organization called The Well Armed Woman. My wife, Candace heads up all 17 chapters as the State Leader here in Florida and teaches along with me. This organization consists of women, 21 years and up with various background experiences in firearms. A lot of these women are fairly new to shooting and have never fired a rifle before. Our brace of Ruger 10/22 rifles regularly come into play as excellent training aids to get women comfortable with a long gun. The smaller factory stocks of the Ruger rifles perfectly fit the majority of the ladies body frames and allows them to quickly learn the proper way to mount a rifle. With virtually no recoil and very little muzzle report, shooters and focus more on hitting their target rather than what “kick” is going to come back and hit them. 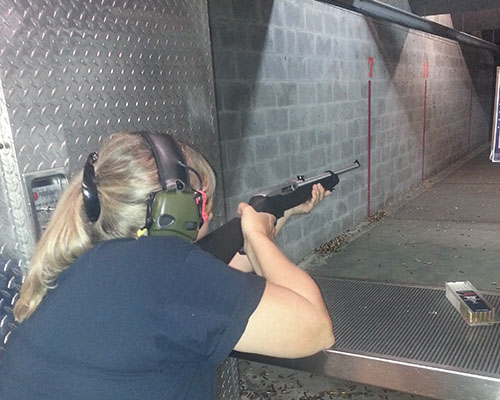 Teaching these new shooters leads to the greatest of all enjoyment to shooting which is known as Plinking! Sadly the days of the old school shooting gallery hitting the steel rotating ducks and spiral colored round spinning plates are over so in the spirit of these wonderful little galleries, we set up chalk discs, self-sealing polymer spinning targets and metal swinging targets by great companies like Do-All and Champion to plink away with Ruger 10/22 rifles. The shape and size of the carbine models immediately reminds the lucky few who remember the experience of shooting galleries of the lightweight youth model .22 LR rifles used back then. Plinking with the Ruger 10/22 is amazing tool to hone your marksmanship skills without getting mentally hung up on having to make perfect bullseye groups. 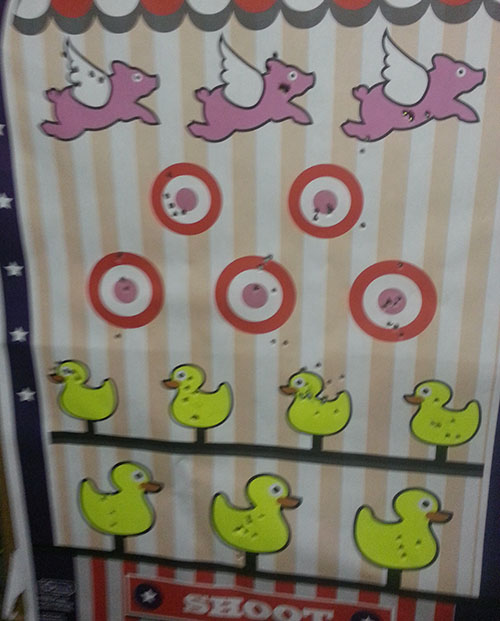 Not long ago, I did an interview with Texas Fish and Game Magazine writer, Dustin Ellermann. Aside from his writing, Dustin is known all over American as the Season 3 champion of the History Channel’s shooting competition television show Top Shot. For those who aren’t familiar, this show featured weekly non-traditional shooting challenges ranging from slinging Colt Peacemakers at color filled jars to zip lining down a course of exploding targets. Dustin and 15 other competitors lived in a house together throughout the competition to add to the gamesmanship between shooters. Most of the competitors came to the show with multiple national and world shooting championships and / or years of military / law enforcement tactical training. Dustin was simply a Christian Youth Camp director with a will to win. When directly asked, “Dustin, how did you prepare to compete against all those expert shooters?” Dustin explained how he and his trusty Ruger 10/22 began shooting daily in various positions and distances. Dustin is a life-long shooter, who mastered the basic fundamentals needed for any firearms platform simply by using his .22 rifle. Within weeks of just shooting this little Ruger rifle, Dustin was off to California to shock the world on national television! 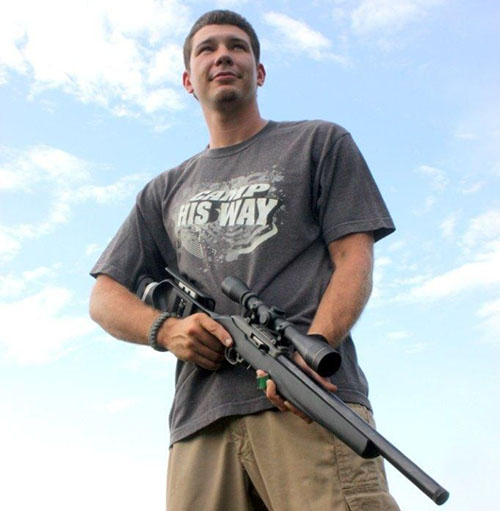 With the ever changing times we currently live in, keeping a perishable skill like marksmanship sharp is more important now than it has been in decades. While you will see several gun gurus preach the power of the 5.56, .308, 9mm or legendary .45 ACP as the “end of the world” survival firearm, here is something to think about before choosing what you will have by your side in a bug out situation, WEIGHT. To start with, the Ruger 10/22 is a fraction of the weight of a traditional battle rifle and about the same as the common full size semi-auto pistol. Two boxes of .308 ammunition (40 total rounds) equals approximately 3 boxes of .223 or 5.56 (60 total rounds) or one box of 9mm ammunition (50 rounds) while a box of 550 rounds of bulk .22 ammunition will weigh roughly the same while costing half of what any of the other options will run with even the cheapest brand name. If you have to carry your bug out rifle very far, a 5lb Ruger 10/22 with 550 rounds sounds a lot better than a 10lb AR-15 and much heavier ammunition with far less capacity! 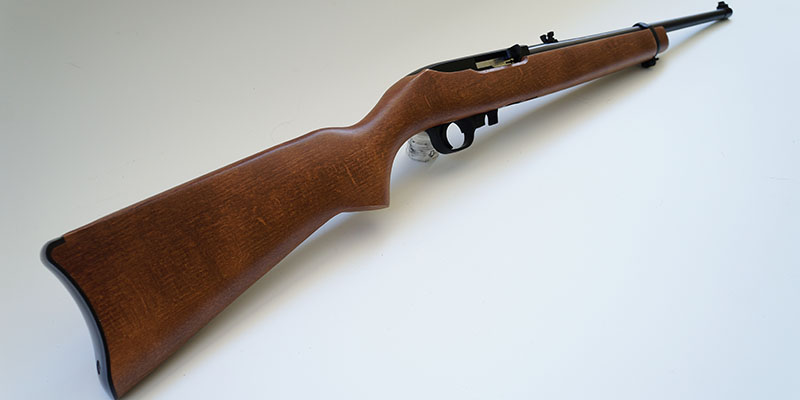 As you can imagine, the Ruger 10/22 rifle is truly a rifle design you can learn on as a child and still enjoy throughout your adult life with its many options available and roles it can play. Whether you are teaching someone, who is holding a rifle for the first time or wrestling the last remaining dinosaur in the bayou swamps of Louisiana, the Ruger 10/22 will be as accurate as advertised every time and deliver the performance Ruger has set a gold standard for the rest of the industry with. Retailing for $289, most 10/22 carbines can be found around $249 new and under $200 slightly used. For the cost versus the performance, the Ruger 10/22 is not a rifle you need to have one of in your collection. The truth is, you need to own as least two or three in order to let friends and family join in on all the shooting fun!