Skip to content
blog.GritrSports.com > How to Guides > Shooting Competitions – Why Compete?
How to Guides 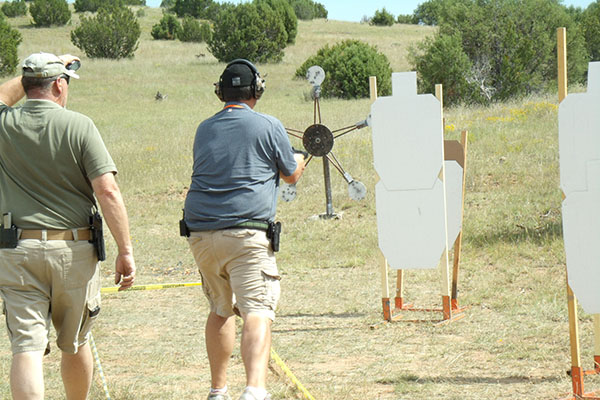 The real pleasure in shooting comes in hitting your target – kind of obvious, right? We learn from our misses, but we want to hit. But if all we do is practice by ourselves, how much are we learning? I’m sure some folks set up their camera and record themselves shooting, and then analyze the results, but the problem remains – you don’t know what it is that you don’t know.

Humans are hard wired to compete – I’m confident that shortly after cavemen Ogg and Mugg first picked up stones to more efficiently kill game, they were trying to see who could throw them further, faster, and more accurately. They were competing, because the one who excelled prospered, and the other did not.

This kind of evolution has continued, with most improvements in firearms and techniques moving from the competitions to the field. The latest are the red dot sights, which started in practical pistol competition. Oh yes, I was one who said: “Impractical, too big, too delicate for a defensive handgun!” You know, once you get used to it, eating crow is not such a bad taste. Now, after having been well proven in battle by our troops, red dots are appearing on concealed carry pistols. In fact, one competitive group, the U.S. Practical Shooting association, has just created a new class for defensive handguns with red dot sights!

Not just technology has improved – techniques tested in competition are now part and parcel of self-defense, law enforcement, and military training. In fact one reasons the armed services have competitive teams is to bring to their training programs the latest ideas from open competition, where most new ideas are born.

No matter what kind of shooting you do – hunting, self-protection, shooting for groups, black powder, whatever – there is a competition for you. Over time some grow, some shrink, and some even disappear only to reappear in a different form years later. I’m sure the founders of the U.S. Revolver Association never thought it would re-appear as ICORE, the International Confederation of Revolver Enthusiasts.

In any of these games you get to choose which way to go. Many use their everyday guns, perfecting their skills with the guns they actually use in the field. In some areas they are known as “Martial Artists.” Others choose to follow all the latest modifications of guns, ammo, sights, what have you – usually called “gamesmen.” But you get to follow your own path, as long as you are less concerned with how high you finish in the standings of the game, than your performance when it really counts.

Over the years, I have competed in .22 rifle, High Power Rifle, bullseye pistol, Cowboy Action Shooting, handgun silhouette, and practical pistol. It may be more correct to say I have shot in these competitions, as the only one I really excelled at was PPC, which is only open to police officers. Along the way I found a single uniform factor: those I was competing against would do their best to help me!  They have loaned me guns and ammo, tutored me, given me hints on the best way to deal with a course of fire, fixed my guns, and have been my friends.

The real value of competition is to test yourself and your gear, under a bit of pressure. If you want to be able to function at a high level under stress, you should compete! It may be in preparation for that once in a lifetime hunt, or protecting you and yours from the goblins of the world. But you will learn better tactics and techniques and get to try the very best ’state of the art’ gear without making a major investment. Almost every competitor I have ever met has offered to let me try his/her gear to see if I should follow their lead. And you learn by shooting with people who are better than you are!

No one claims the stress of competition equals the stress on the street or in the field, but the more accustomed to stress you become, the better you will perform.

If you are a hunter, there are competitions to replicate the skills you need in the field. Bird hunters have Trap and Skeet, 5 stand, and now Sporting Clays. They are all designed to reflect the various actions birds take when they burst from cover. If you think you are up to it, try International Trap where there are a series of throwers that pan back and forth and oscillate – and you start with the gun at your hip!

Rifle and pistol hunters can start with the Winchester/NRA Hunter Marksmanship course. It can start with BB guns, air rifles, and includes small bore and high power rifles, pistols, muzzle loading rifles and pistols, and shotguns. You start as a “Pro-marksman,” and you can advance to Expert shooting at targets. But Distinguished Expert requires a successful hunt, documented with photos and data on the game, firearm used, and details.

In fact, the NRA offers all kinds of competitions for rifle, pistol, and shotgun. Although mostly known for their defense of our gun rights, they started as a training organization and the home of competition. You can’t go wrong by paging through the NRA competitions division on their web site.

More challenges can be found in all the varieties of silhouette shooting – rifle, pistol, Black Powder Cartridge, etc. If you can hit and knock over a 55 pound ram target from standing at 500 meters, how well will you do during deer season from a rest at 250 yards? I guarantee you will be a better shot than almost everyone who has never taken up the sport. And, you will understand how you and your rifle or pistol shoots in the cold, the heat and the rain.

The next step for riflemen and women is NRA High Power rifle competition. Here, using any type of center fire rifle, you add time limits while shooting from standing, sitting or kneeling, and prone – and reloading under time as well. You can compete on a 100 yard range using reduced targets, but shooting prone at 600 yards will test your sight alignment, trigger control, and wind coping skills, as well as how solid a position you can hold. And there are specific competitions for sporting rifles!

If your interest is in self-defense, there are two international groups you can choose from – IDPA and IPSC. International Defensive Pistol competitions have requirements for concealed carry and other subjective elements, meant to replicate how you carry a gun on the street. The International Practical Shooting Confederation does not require concealed carry, and offers competitions around the world.. They offer a wide variety of practical based problems that you get to solve, with categories for all kinds of defensive handguns, from Production (bone stock) to Open (almost unlimited modifications).

In this country, the ruling body is the U.S. Practical Shooting Association, who have also embraced the latest form of practical shooting: 3 gun. Courses of fire require targets be engaged with rifles, pistols, and/or shotguns – sometimes all three on one stage. If you like to run & gun, this could be the competition for you! If you serve in the police or military, or you would like to, 3 gun gives you the background to do well “on the street.” Or, you can let your inner “operator” come out and play with folks who can do amazing things with these firearms.

The earliest, and to me the most difficult competition, is Bullseye Pistol. Here, you “stand and deliver” using one hand only, and you aim for the X in the center of the black round target. It requires you to fire with a .22, a center fire handgun and a .45 – these days usually semi-automatics – although revolvers are welcome. This remains the ultimate test of personal control, and doing well here means you can do well in any rifle or pistol sport. Heck, they seem easy with larger targets after trying to focus on the sights and put every round into the same hole using just one hand. 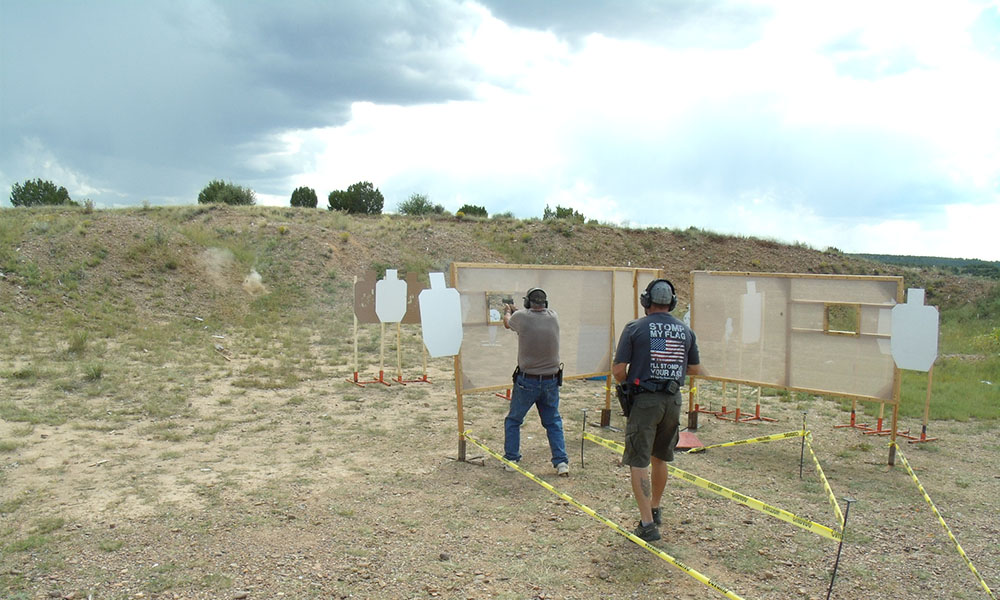 Those with an interest in the Old West have the Single Action Shooting Society. It is a social occasion that involves shooting. You get to dress like a cowboy or cowgirl and use the guns of the 1880’s. Single action revolvers, lever action rifles and double barreled shotguns are the guns of this game! The targets are steel plates, so you get instant gratification for a good shot. And at the bigger competitions, there are costume awards with categories such as B Western, Best Lawman, etc.

If you like to ride horses, a branch of this type is Cowboy Mounted competitions. The action is fast from the back of your mount! They use the same kinds of guns, but they are loaded with cream of wheat to break balloons. Competitors rocket around a fixed course, mixing speed and accuracy.

There is even a small group that reenacts the roaring twenties with clothing and guns of the day. Finally, there are competitions for those who own fully automatic firearms. They use a multitude of targets and sometimes rental guns for those who want to try it. If it shoots, there is a game to be played with it!

All it takes is finding a match, and getting out and doing it!

GETTING STARTED – THERE IS NOTHING EASIER!

The best way to get started is to find a competition and show up! Bring eye and ear protection, and if you already have a gun of the type used, bring it and some ammo. If you don’t, someone will say: “Here, would you like to try mine?” I have had folks hand me custom made guns valued at thousands of dollars, just so I could try my hand. World Champions have offered me tips – no charge! You will meet some of the finest people on the planet, and you’ll get a chance to measure your skills against the best. In most competitions, the question is NOT “How did you do?” but “Did you have FUN?” What could be better than a day spent with like-minded people, meeting them, learning from them and seeing how the best in the area do it?

Then, when you spot that giant elk or hear breaking glass in your home, you will know your abilities and be able to focus on the situation at hand. If it means meat in the freezer or your family safe from harm, competition will have helped you “solve the problem.”