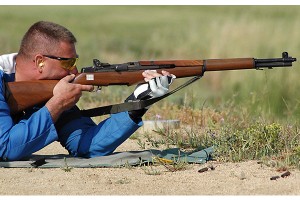 A guide to modern ownership of the M1 Garand.

U.S. Rifle, Caliber .30, M1 was the first practical self loading rifle to be standard issue by a major military power. A product of Springfield Armory’s consulting engineer John Cantius Garand’s genius, the rifle was never officially titled “M1 Garand” but that is the name by which it is so widely known. Even the Civilian Marksmanship Program, the most recognizable supplier of these rifles, refers to them as such. The M1 was adopted in 1936 as the 1903 Springfield bolt action rifle’s replacement and served in the US until supplanted in 1957 by the M14. M1s would continue to soldier on in numbers throughout the 1960’s and later by other nations friendly to the United States.

Today, the M1 is enjoyed by shooters for a host of reasons. Let’s look at some of them.

Competition shooting has been and continues to be the single largest driving force behind skill development for every firearm use. National Match shooting is one of the earliest forms of formal competition shooting in the United States and comprises range exercises originally developed to train skills with military issue rifles and pistols. As shooters improved, match grade versions were developed. This provides a number of benefits. New ideas and improvements for the current issue service weapon can be tested. As event participants improve skills, accurized versions encourage further practice and development.

While organized shooting events are clearly superior for developing higher level marksmen, there are a few black marks against it. One of the more common complaints is the use of overly specialized competition-only firearms and accessories. Some of the modifications that let the M16 win in competition have trickled down into combat gear, notably the A2 rear sight, free float hand guards/rails, and magazine length 77 grain projectiles (Mk 262). However, few individuals competing in service rifle matches today would choose to carry their competition service rifle to battle. Heavy barreled and stocked rifles using optical aids in the rear sight (CMP-legal M16s are sometimes weighted to double the poundage of rack M1s) and hard back shooting coats are useless in the field.

This was not the case in the early days of Service Rifle shooting and remained true with the M1 until the M14 supplanted it. National Match M1s used through the early 1970s were service guns worked over a bit. Springfield Armory produced M1s until 1963 and they were fully combat ready service rifles, albeit more mechanically precise. The first bedding jobs began by wedging match book covers between the trigger group flats and stock, holding the barrel group tighter. Later, techniques such as epoxy bedding and gluing the hand guards to higher-quality barrels were used. The best match conditioned M1s could shoot close to one minute of angle groups at 600 yards routinely. At 1000 yards, these same rifles could still hold two minutes, well inside the thirty-six inch five ring on the old ‘C’ target before it was superseded by the current LR target.

.30-06 Springfield was the only cartridge allowed in standard NRA match rifle competition at the time and bolt action rifles chambered for it weren’t much more precise. The best of the day struggled to stay inside six inches at 600 yards and fifteen inches at 1000. In 1963 .308 Winchester/7.62mm NATO was allowed for competition at the National Matches and further accuracy improvements began. Shooting from machine rest, military team converted M1s could shoot match grade ammo inside four inches at 600 yards and twelve inches at 1000. The best bolt actions cut this to under three at 600 and eight at 1000.

Improvements in rifle and ammunition precision forced scoring rings on High Power targets to be reduced. Shooters were routinely shooting clean V counts on the A, B and C targets used since the turn of the century so tie breaking was common and painful. By 1966 the 200, 300 and 600 yard targets were changed to the current decimal targets used today. 200 and 300 yard targets went from a twelve-inch five ring down to a seven-inch ten ring, and the twenty-inch center on the 600 yard ‘B’ reduced to twelve inches. Five years later the 1000 yard ‘C’ target morphed down from thirty-six inches to a twenty-inch ten ring.

Some argue the M1 was the last “true” Service Rifle, in that the NMC version is a slightly improved issue piece. My National Match Garand was built by legendary Navy Armorer Don “Mac” McCoy, an M1 specialist. Upon retiring from the Navy, he moved to San Diego and become renowned among the southern California High Power community for exceptional workmanship, his trademark being a very shiny finish on his stocks.

Besides the stock’s sheen, the most obvious change is rebarreling with a medium-heavy Barnet barrel (Douglas blank) chambered to 7.62x51mm with a 1-10 twist. This is perfect for 168 grain bullets, such as those loaded in the superb Lake City match ammunition. Internally, the action is set tightly with a mirror fit to the stock via bedding compound. The barrel floats without touching the stock.

A common problem among Garands is the tendency for point of impact shifts as the rifle heats. There are a couple things a gunsmith must check. The op rod can’t touch the stock anywhere. The rear handguard should also float with only the retaining clip touching the barrel and a slight gap between the receiver, otherwise the amount of pressure on the receiver will change with temperature shifts. Another point of concern is the forward handguard. Some shooters claim that if the gas cylinder is too tight here point of impact can vary six to eight minutes as the barrel heats up. To avoid this, the front handguard and stock must be aligned with no barrel contact forward of the lower band. Gunsmiths fix this by gluing it into place and ensuring sufficient clearance.

These fixes raise the accuracy potential greatly. To use that potential, we need to improve the fire control systems, namely the trigger and sights. Garand iron sights are among the best ever on a military rifle. As issued, each click of elevation or windage moves the strike one minute of angle. This is plenty of precision for field shooting, but an Across-The-Course shooter will need more. The windage knob on NMC Garands give half minute clicks, however, elevation remains a full minute. To yield a half minute adjustment, the hooded rear aperture is offset and can rotate 180 degrees. A notch indicates if the peep is up or down.

Furthermore, the front sight is shaved down. Typically, issue M1s (and M14/M1As) will have a 200 yard zero eight to twelve minutes up from bottomed out. A 600 yard setting would be around 28 clicks up from bottom, forcing the shooter to bring his face up slightly to get an eye behind the sight. By shaving the front sight down the rear sight stays lower for the same elevation zero.

Another reason the M1 is so beloved is because it has one of the best trigger actions on an issue semi-auto. However, improvements can be had. A National Match rifle must have a trigger capable of lifting at least 4.5 pounds. A good gunsmith will polish and set the parts so most of that weight is taken up in the first stage, leaving a consistent, crisp second stage.

As the M1 and then the M14 fell out of favor for the M16/AR-15 for Service Rifle competition, people more interested in nostalgia than winning began pining to bring them back. The CMP was formed as a non-profit civilian organization after the Department of Civilian Marksmanship was disbanded in the mid-1990s. Lacking government funding, the CMP receives a large portion of its income from surplus sales.

The M1 requires a fair amount of tweaking to be competitive and will never be as competitive or cost effective as the M16/AR-15. Recognizing this, the CMP created new competitions and courses of fire marketed as their CMP Games specifically requiring As-Issued Military Rifles (as well as As-Issued Military Pistols and Rimfire Sporter Rifles) allowing only slight improvements to Garands and other firearms. Of course, these as-issued arms just happen to be (to nobody’s surprise) exactly those surplus items the CMP offers for sale.

For Garands, the CMP’s As-Issued competitions include the Military Rifle match (covering Springfields and other vintage military rifles as well), the John C. Garand match specifically for the M1, Unlimited M1 Garand match for modified match-grade M1s as described above, and the As-Issued M1 Garand Special EIC (Excellence In Competition) match.

National Match schedules at Camp Perry have been tweaked over the years as CMP Games competitions become more popular. These Games are an ideal introduction to competition shooting, especially for gun collectors and accumulators interested in Garands and the like with no prior competitive experience, and a good place for a “retired” competitor wanting to keep shooting but on a less rigorous course of fire. It certainly beats merely collecting Garands, which denigrates the worthy old warhorse down to a dust collecting “safe queen” status that is only fondled and rarely (or never) shot and trained with.

CMP rulebooks can be downloaded for free at CMP.org.

Use of .22 rimfire as an inexpensive, short range trainer is as old Flobert’s primer-powered rounds known as BB (Bulleted Breech) Caps. A more recent and popular example of this is the Appleseed Project. As the cost of military surplus and new-production ammunition rises, many Appleseed instructors and attendees noted a need for a cost-effective means of practicing marksmanship, especially at 25 meters. Proficient marksmanship requires regular practice, though not necessarily at full-distance. Practice at 25 meters doesn’t require a full-power centerfire as the wind effect on a .22 there is no more than a centerfire cartridge at 100. The organization started basing their 25 meter shooting course with light training rifles (sometimes dubbed Liberty Training Rifles by its members) with the Ruger 10/22 being most popular.

Kingston Armory, of Liberty, NY has a solution specifically for Garand shooters. The receivers are steel and the steel butt plate and stock hardware are faithful to the original design. The stock and furniture is made of American Walnut. The rifles are based on the 10/22 action and the receivers are made at Kingston’s facility from 4140 steel, making them feel and balance like the real thing.

Unless the smaller-than-normal hole in the muzzle is noticed, Kingston Armory M1 rifles are convincing. Externally, Kingston’s rifle appears very close to the real deal, with a solid, full-length stock, sling swivels, and quality, fully-adjustable iron sights. Internally, the action screams 10/22, right down to the rotary magazine attached to a plate appearing as the base of the blind magazine that would be housing the en bloc clip, though the design features three U.S. Patents acknowledging unique features. The guns also include new-production Garand parts to add to the look.

Davenport Guns and Shooting Club is a retailer of these rifles and notes that sales are brisk. Owner Janelle Westrom told me personally that upon initially offering these Garand replicas she had customers driving up to three hours one way to purchase them.

As the first practical issue self loading military rifle, the M1 left its mark on the battlefield and training ranges. Its influence is still felt on High Power ranges to this day and, as a testament to its design, can still be competitive there. For those who don’t want the expense of full match conditioning, new life has been breathed into the old warhorse via the CMP Games. However you shoot it, the Garand is a true rifleman’s rifle.