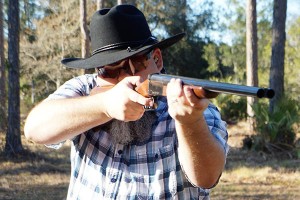 Continued from The Guns of Cowboy Action Shooting – Part 1. 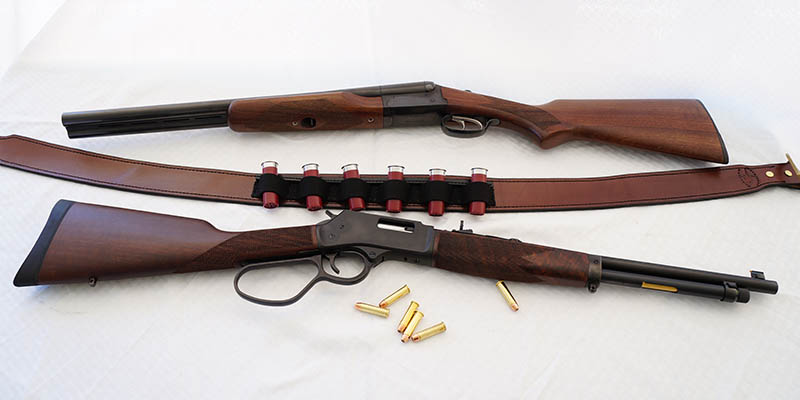 Heralded as the “Gun that won the west,” the lever action rifle quickly became a military force multiplier during the American Civil War. The U.S. Army previously employed slow to reload rifles such as the Spencer rifle while battling through the Civil War and against Native Americans during the era of Manifest Destiny. With the invention of the Henry Rifle, soldiers increased ammunition capacity tenfold while decreasing reload times by 90%.

Due to the popularity of cowboy shooting organizations, the Henry rifle is still being produced today by a new company under the watchful eye of Anthony Imperato and his family. These modern Henry Rifles are made with better quality than the originals while still maintaining the spirit of the “Old West.” This high quality along with affordable pricing makes rifles from Henry Repeating Arms a favorite of Cowboy Action shooters, hunters and plinkers alike. 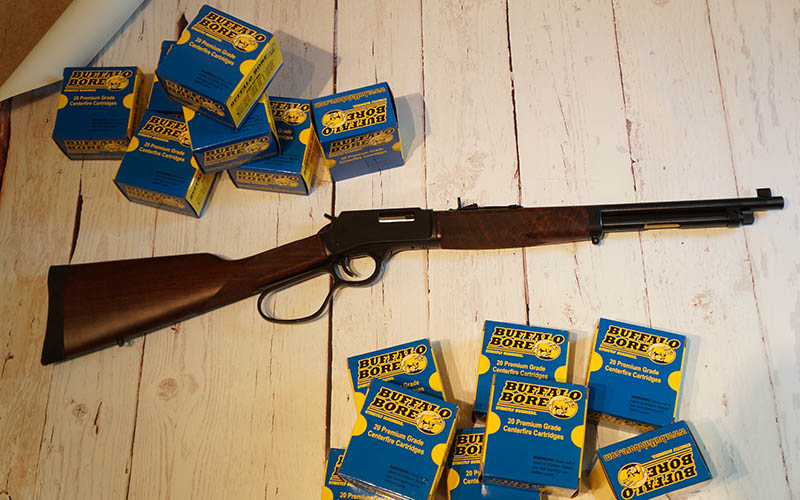 For competition, many Cowboy Action shooters prefer to choose rifles chambered in the same caliber as their pistols to simply having to carry around various types of ammo from stage to stage. Most targets are simple steel shapes varying in size and distance and do not require more than a .38 caliber round to topple them over. Due to the reduced recoil of the .38 cowboy load and lighter weight of carrying more of them around all day, I chose a Henry Big Boy Steel Carbine model HO12MR chambered in .38 / .357 to match my brace of Ruger Vaqueros.

This rifle is very fast handling and extremely accurate while shooting quickly. With a capacity of 7 rounds loaded via the magazine tube, not only does it provide adequate capacity for most rifle stages, it 16.5 barrel whips quickly from target to target without the lag time of longer barrels. For most informal competitions and less strict organizations, this is the perfect rifle choice coming in at around $850 US for full retail. 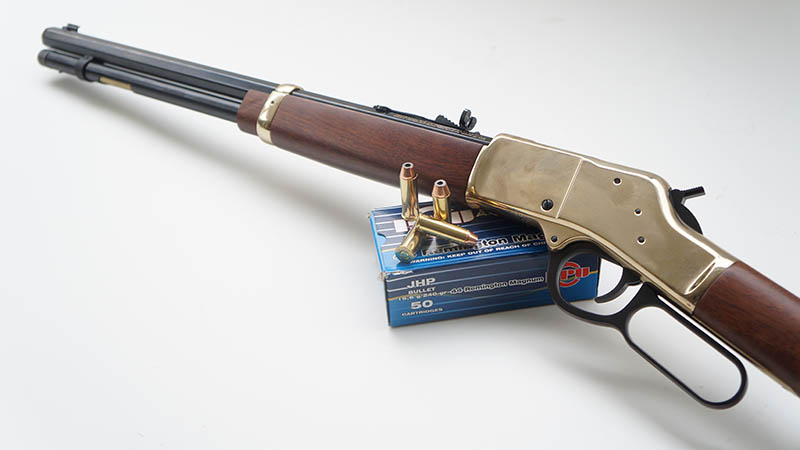 The only place I have not been able to use the Henry Big Boy Steel Carbine was in the larger sanctioned Single Action Shooter (SASS) events. According to their bylaws, the only Henry rifle currently approved is the larger, brass framed Henry Big Boy. For these events, I have currently own one of these beautifully finished 10 round capacity rifles chambered in .44 Magnum. Normally, this model H006 rifle is a short range white tail deer rifle, hence the larger chambering, but Henry does offer them in classic .45 Colt and .38 / .357. If I were a bit more active in the organization, I would gladly invest in another rifle to match my pistols to reduce my ammo load. Retailing at $899 US, this is by far a less expensive and better built rifle than the Winchester clones coming back to market.

Arguably the most powerful close range personal firearm in not just the Old West but in all of U.S. history is the shotgun. The earliest versions of the shotgun in America were percussion, muzzle loading firearms of both the single and double-barreled variety, with ammunition varying widely from stones to irregular shaped lead shot. One such scattergun was found at the Alamo after Santa Anna’s forces overran the garrison. The most famous of these street howitzers is the iconic double barreled shotgun. 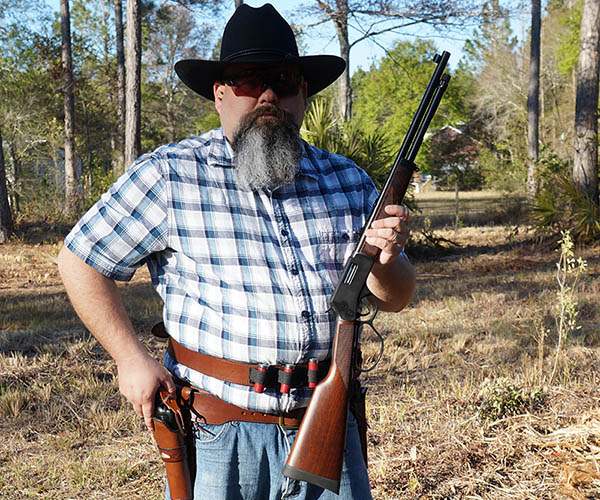 Often called scatterguns due to the wide angle of the shot patterns deployed from their side by side barrels, they were the preferred firearm of most law enforcement. During the fabled “Shoot out at the OK Corral,” tensions broke into a hail of lead when Doc Holliday emptied his shotgun into Tom McLaury’s chest. Even today, most law enforcement offers are issued some form of shotgun for duty. The most iconic of all the scatterguns would be the “coach gun” which is regularly used in cowboy action shooting. These short 20” side by side barrel shotguns were often used to accompany security agents who rode along beside stage coach drivers to protect gold and money shipments to and from western frontier towns.

For my choice of scattergun for all my Cowboy Action Shooting needs, I reached out to Stoeger. My favorite design is their basic, no-frills Stoeger 20″ double barrel coach gun. My personal cowboy action shotgun has a simple Grade A satin walnut stock set and a dark basic blue metal finish. The metal to wood fit is flush at the receiver and tight but may not always be perfect, but keep in mind, these scatterguns are built for hard use not display behind glass. 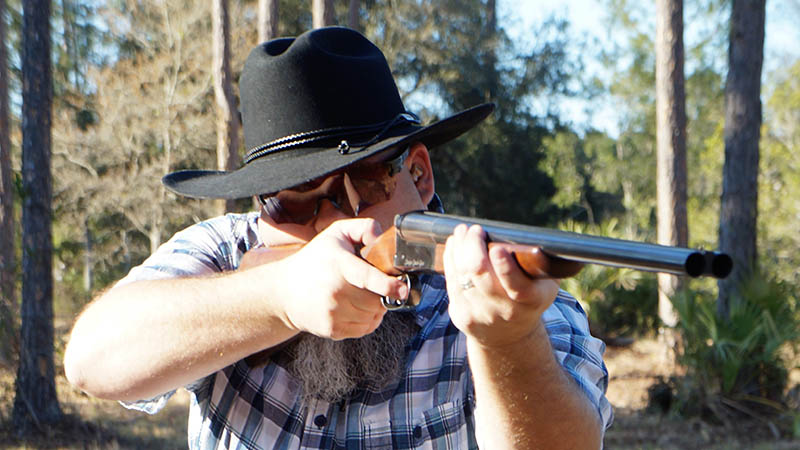 The double triggers used for firing the right and left barrels seemed stiff at first to someone like me with a deep background in precision rifles with hair triggers, but for running and gunning with a shotgun, they were very manageable and did not affect the hail of lead dispensed by their barrels. The overall length of the shotgun was compact and easy to swing onto target as I transitioned from each steel plate. As per cowboy action rules, the break action did not include automatic ejectors. In order to quickly reload, a technique of flipping the gun backwards at an angle had to be used to dump the spent shells to clear the way for the next two coming from my belt rig. The chambers offered enough space for the shells to cleanly exit and facilitate quicker reloads. 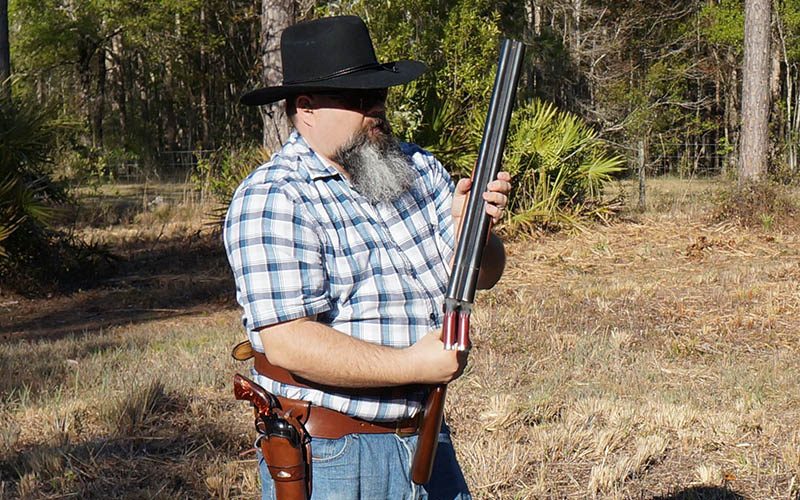 Retailing for around $449, this shotgun is an excellent choice for the entry level shooter because it looks good, works great and can handle your choice of 2 ¾” and 3” shells. The manual of arms, maintenance and use of the Stoeger are simple and straight forward even for those who don’t regularly work with the shotgun platform. The learning curve to proficiently use this shotgun in a competitive atmosphere is one of the lowest of any equipment needed for cowboy action shooting. The Stoeger coach gun is an easy choice to make when deciding which shotgun to start your cowboy adventure with.

One item not required to participate in cowboy action shooting but does help complete an authentic look is a good blade. Regardless of outlaw, law dog, military officer or Native American warrior, everyone historically carried a knife of some sort. The frontier scout was known to carry the famous Bowie or skinning knife, the riverboat gambler a small hide out blade and the marshal persona such as the Tinstar Kid would need a good last resort dagger. To fill this role, I reached out to my good friend and TBOC bearded brother, Wes Adkins of Adkins Wood and Knife. As a long-time fan of Wes’s work, I described roughly what I had in mind and asked for his expert input. Wes’s response? “No problem brother, I got you covered.” A few weeks later, what I received in the mail as the finished product was nothing short of beautifully deadly! Wes hand built a beautiful custom push dagger with wood grips. This would be perfect for the Old West lawman who would need a “get off me” blade. 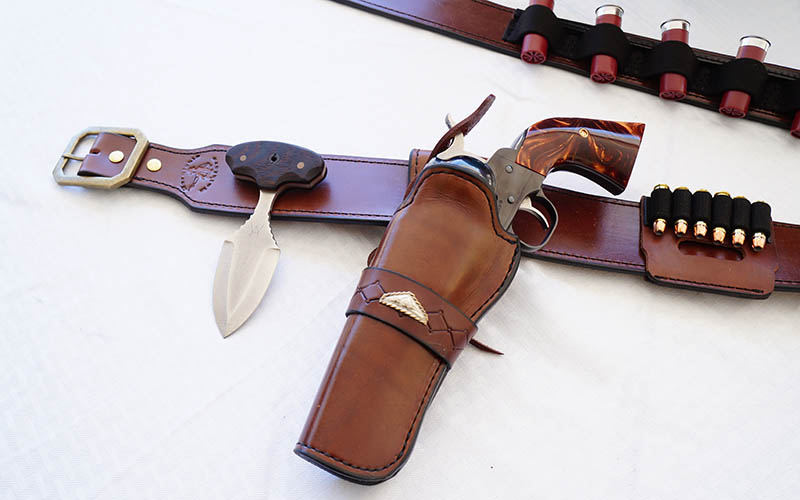 To be clear, while cowboy action shooting attire is just for sport, this blade is 100% live and ready for hard use. The push dagger was custom built from CTS-B75P steel with Wenge wooden grip with a Honey Locust liner and secured with copper pins. Straight out of the mail box, this push dagger sliced through the corner of a phone book and then severed a piece of paper into strips with the flick of a wrist. The fit between my fingers to establish a controlling grip was fitted perfect in between my index and middle finger. As I learned to move comfortably with this razor-sharp push dagger, I could really feel great balance and design Wes put into his creation.

Accompanying the blade was a rich brown leather sheath with a belt clip. This sheath allowed for positioning the knife in the rear of the gun belt and deploying quick and easy. This blade was so comfortable and easy to use, I ended up requesting a modern Kydex sheath as well for use in my daily carry with my Glock 19. Retailing for around $325 with a Kydex sheath and the upgraded leather option for $25 more, this is a great value in the world of custom blades considering the time and materials put into this project. If you are in the market for a good quality blade to fit your sporting or daily needs, I highly suggest considering a custom design from Adkin’s Wood and Knife. If you’re like me and a fan of a well-made blade regardless of whether it’s a hunting, tactical or cooking knife, you won’t want to miss out on the daily project updates Wes is relatively famous for posting on his Instagram account.

Final Thoughts before Riding Off into the Sunset

Despite the limited availability of “Old West” clothing and ammunition, the large amount of gear and local clubs, this sport is still growing strong. Usually a good pair of cowboy boots like mine from the folks at Ariat, a pair of old blue jeans and a button down plaid shirt work for most events. While you will see some competitors fully decked out in old west attire, the events are far from being a fashion show worried about who’s wearing what.

What I learned above anything else was the fellowship of the community nationwide. If someone’s rifle breaks during a shoot, there is usually a line of competitors waiting to offer you their personal rifle to finish a stage. Like other sports, Cowboy Action Shooting has its stars from Holy Terror aka Randi Rogers to her grandfather, SASS’s winningest man ever in the sport, Evil Roy aka Gene Pearcey. Having met these people in person, I can attest, these are the most humble and rock-solid folks you will ever meet. 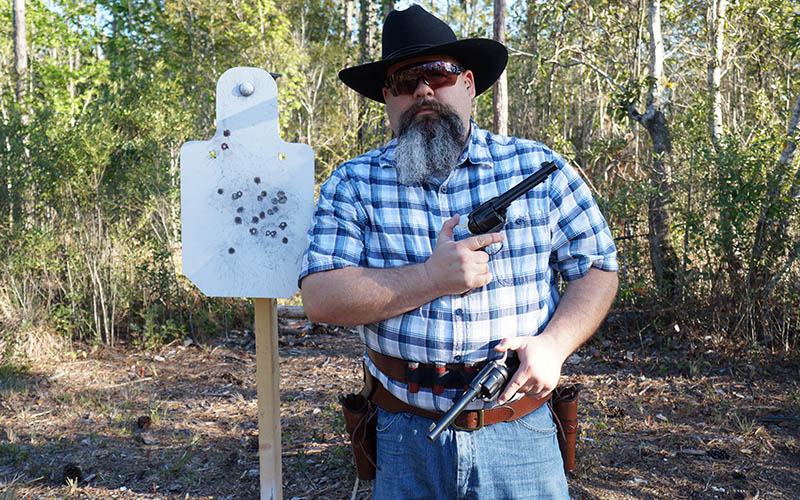 When I started out in SASS, I was fresh out of college learning how to not only become the best Deputy Sheriff I could be, but the man I wanted to become and my future family would need me to be 12 years later after early retirement. I feel like the great people I met in competing helped me grow along the way. Now as a husband and father of two beautiful daughters, I look forward to the day I can upgrade my card to a family membership and start our little gunslingers off in a safe and close knit environment. As my wife and I continue to raise our family and instruct others through NRA firearms courses, it is our goal to help keep the spirit of the “Old West” alive in the next generation of shooters.