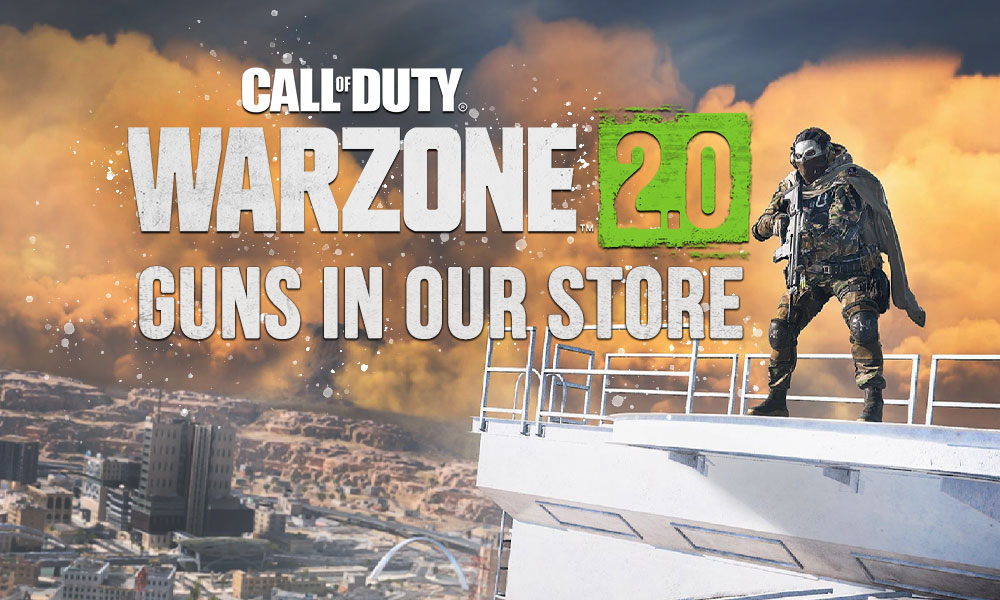 The long-awaited reimagining of the Call of Duty battle royale experience has been out for almost three weeks. Within this time, the game has either lived up to even the highest expectations or exceeded them altogether. Warzone 2 has seen over 25 million players five days after its release and constantly forges ahead of other Battle Royalle titles on Twitch. The players praise improved looting and Safe Zone systems, a more varied combat experience (with newly introduced swimming mechanics and opportunities for thrilling vehicular and aquatic battles), and a more diverse choice of weapons. Many players found the arsenal of the first Warzone frustrating, so the extended range of firearms was a change most welcomed.

It’s no surprise that every weapon in Modern Warfare 2 and Warzone 2.0 has a real-life prototype. The overwhelming majority of in-game weapons bear names not even remotely similar to their inspirations. Even with that, it’s hard to overlook the evident similarities in the designs. If you were looking for the opportunity to bring a piece of this phenomenal game into our world, here’s your chance! We’ve compiled the list of the Modern Warfare 2 firearms and their real-life prototypes you can acquire right on Gritr Sports.

As a clarification: practically all the in-game rifles mentioned on the list are military weapons. We sell none of those. But many military rifles have civilian-allowed variants featuring longer barrels and semi-automatic action. That we can and are glad to offer. 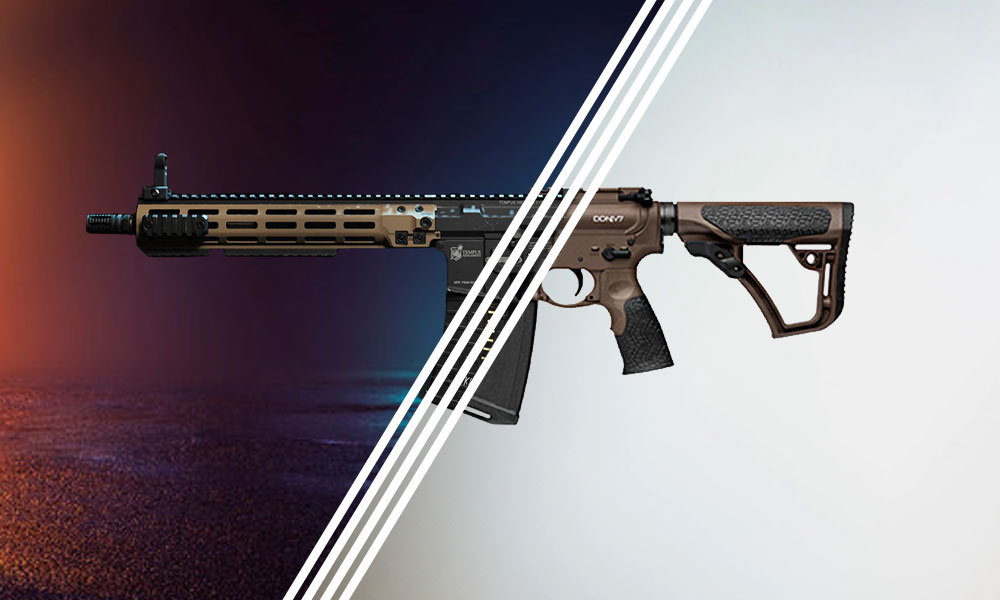 One of the few exceptions to the rule and an obvious candidate for the first mention, M4 is one of the most familiar and reliable firearms in the Modern Warfare series. It’s also the first Assault Rifle a player unlocks in Warzone 2.0., which by no means makes it a rookie choice. The M4’s high fire rate makes it an obvious choice for close and medium range.

As obvious as it sounds, the in-game M4 rifle was inspired by the M4 carbine, primarily used by the United States Armed Forces as the primary infantry weapon. Civilian-legal variants of M4 feature either 16-inch barrels or standard 14.5-inch barrels with permanently attached flash suppressors. All models are semi-automatic-only but visually are hardly distinguishable from their select-fire and fully automatic cousins. 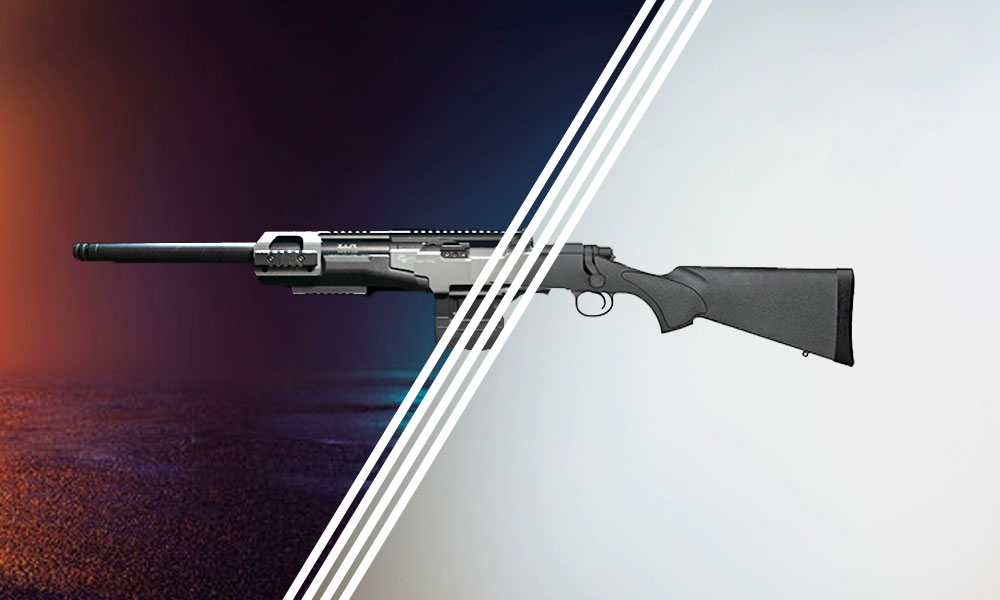 The SA-B 50 is a marksman rifle that offers players on-level long-range performance while being a valid run-and-shoot firearm. With its highly customized look, it’s easy to overlook the similarities it shares with its real-life prototype. The SA-B 50 is inspired by the M24 Sniper Weapon System, adopted by the U.S. Army in 1988 as a standard sniper rifle. The weapon system also includes a telescopic sight and bipod unit, which justifies the weapon system part of the name.

While unreachable for civilians, M24 is only a modified version of the Remington Model 700 rifle. The latter was also used as a basis for the M40 military sniper rifle. This high-precision bolt-action rifle comes in several variants. Though none of them feature the word sniper in their name, all Remington Models 700 are known for exceptional accuracy. 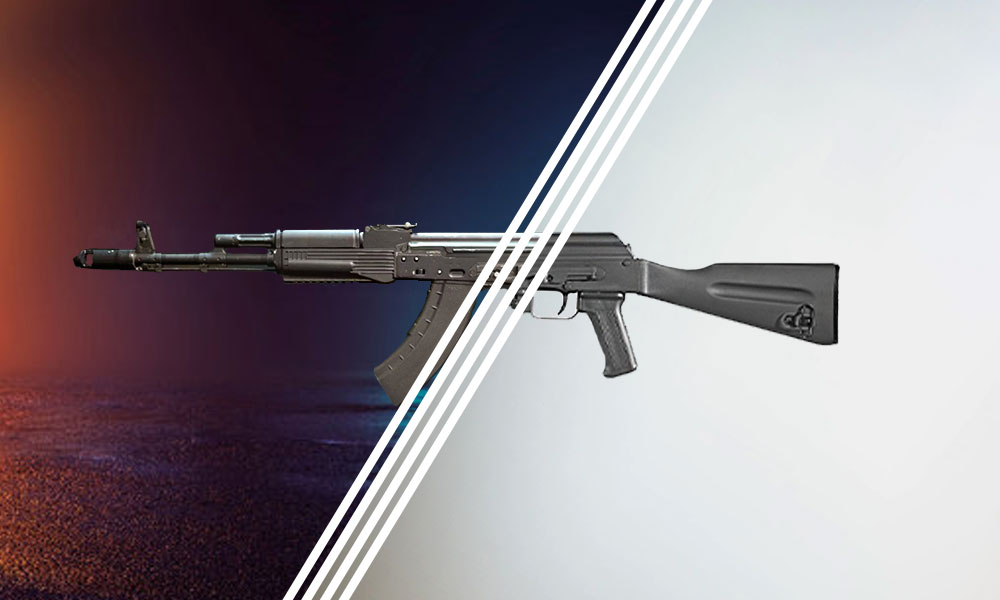 The hard-hitting Warzone 2 assault rifle with a vaguely familiar name Kastov 762 was inspired by the renowned AK-103 itself. Designed by Mikhail Kalashnikov in 1993, the gun is a derivative of the AK74-M rifle chambered for the 7.62x39mm cartridge. It’s been some time since the original Kalashnikov rifles were banned from appearing on the shelves of American gun stores. However, Kalashnikov USA filled in that void with their take on the rifle classic. The KR-103 is an American-made replica of the AK-103 rifle that features several improvements over the original design.

As you can guess, all Kastov-series rifles are based on different AK models. You can find a wide arrow of their KR analogs produced by Kalashnikov USA in our store. 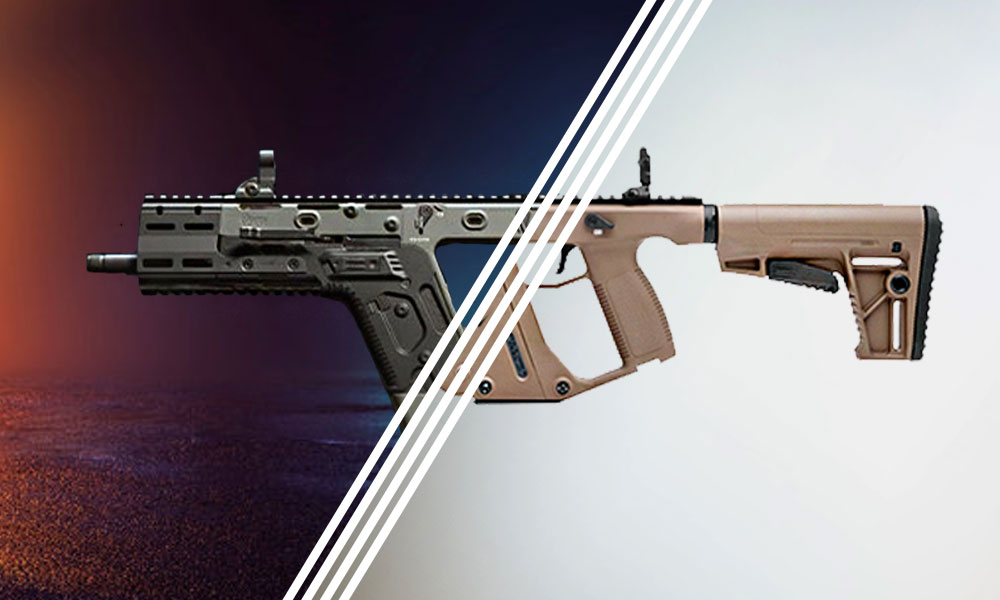 We have no idea what unites this s-tier SMG with a tiny desert fox but the design of this submachine gun is hard to confuse with anything else. Kriss USA produces very peculiar firearms you’ll recognize from a thousand others. The Fennec 45 owes its memorable design to the Kriss Vector CRB – a unique rifle chambered in an array of pistol calibers. The Fennec 45 is inspired particularly by the .45 ACP Vector CRB. The original firearm features a more user-friendly design and recoil mitigation system whose excellence was transferred to its in-game variant. 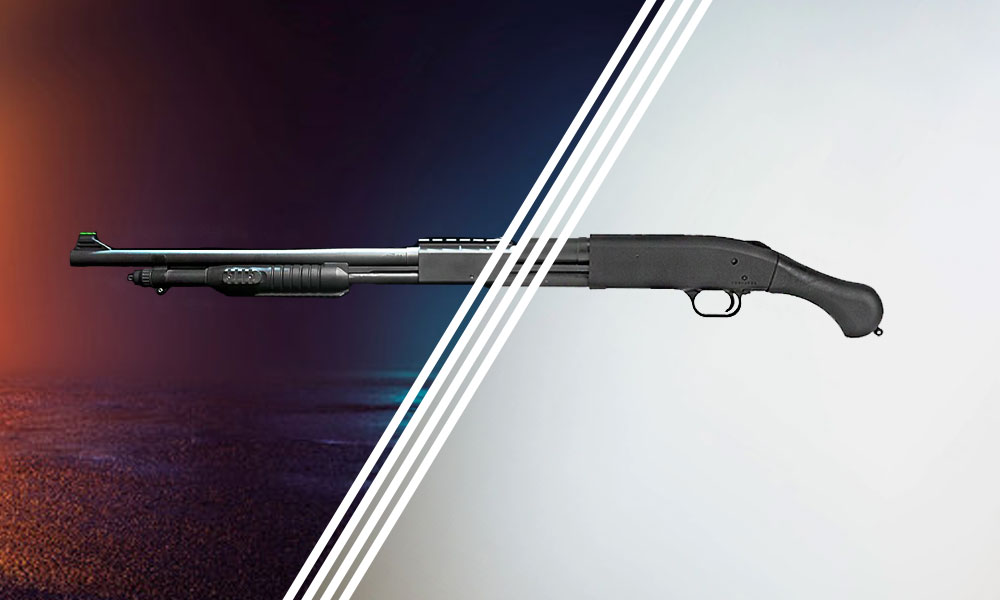 The Bryson 800’s devastating damage is only one of the features it inherited from its real-life prototype, the Mossberg 590. This pump-action duo is capable of delivering a solid punch in both worlds. The original shotgun enjoys more design and configuration options but the customization opportunities of its game embodiment are not scarce either. The Mossberg 590 comes in pistol grip and traditional grip variants with a plentitude of stock styles.

In the same manner, the Bryson 890 was inspired by Mossberg 590M. The major difference between their real-life progenitors, just like in the game, is in the magazine: the Mossberg 590M features a detachable double-stack magazine. 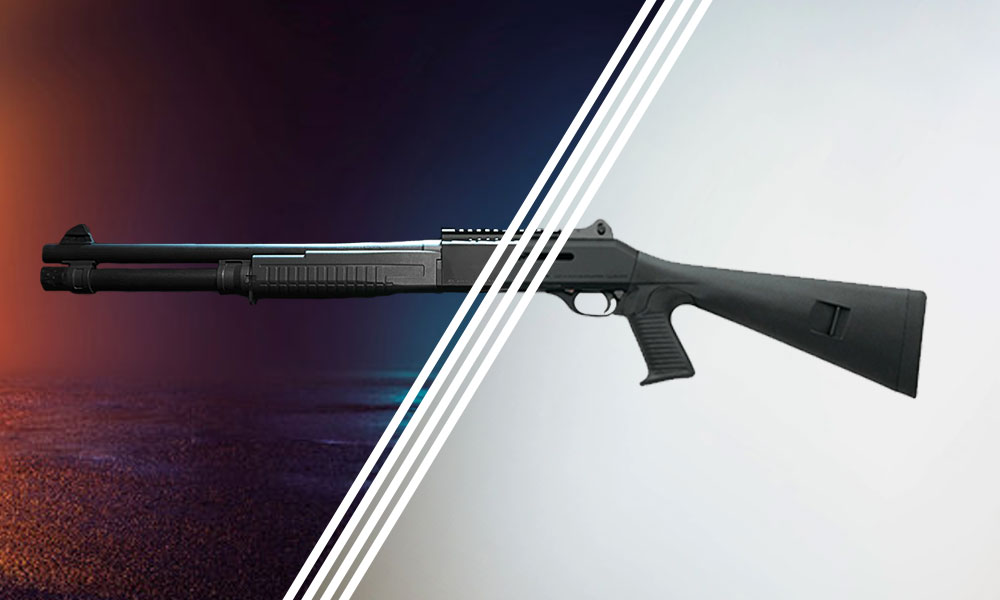 Tier lists are often subjective, but Expedite 12 often bears the title of the best shotgun in Warzone 2.0. The damage is outstanding, and the recoil is not punishing. Of all other shotguns, Expedite 12 enjoys the most optimal ratio of those two stats. Its real-life counterpart, Benelli M4, shows an equally impressive performance. It’s a tactical semi-automatic shotgun featuring a pistol grip stock and a pair of ghost-ring sights with a Picatinny rail. Though both variants lag behind in terms of fire rate, the damage they deal makes up for any drawbacks you might come across. 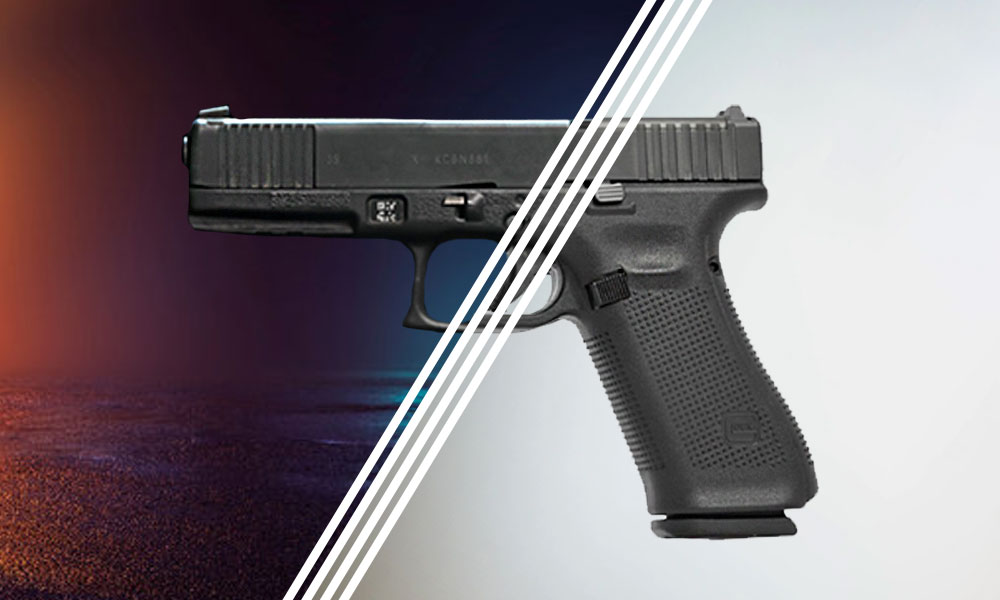 Secondary weapons don’t boast the customizability of the primary ones in Warzone, but underestimating their potential is a mistake that can cost you a win. Handguns in Modern Warfare 2 are the ever-reliable plan B you can turn to when nothing else is available. When it comes to meta, the X12 is considered to be the best secondary firearm in the game. It shouldn’t be much of a surprise for you that this handgun’s prototype is equally recognized in the real world.

Glock 17 is the real-life X12, and that’s pretty much enough to understand why the developers made it so high performing. Glocks are known even to those who’ve never held a firearm in their life, and such popularity is more eloquent than any words. The Glock 17 is an iconic model, so it’s only natural that it served as an inspiration for one of the Call of Duty weapons. 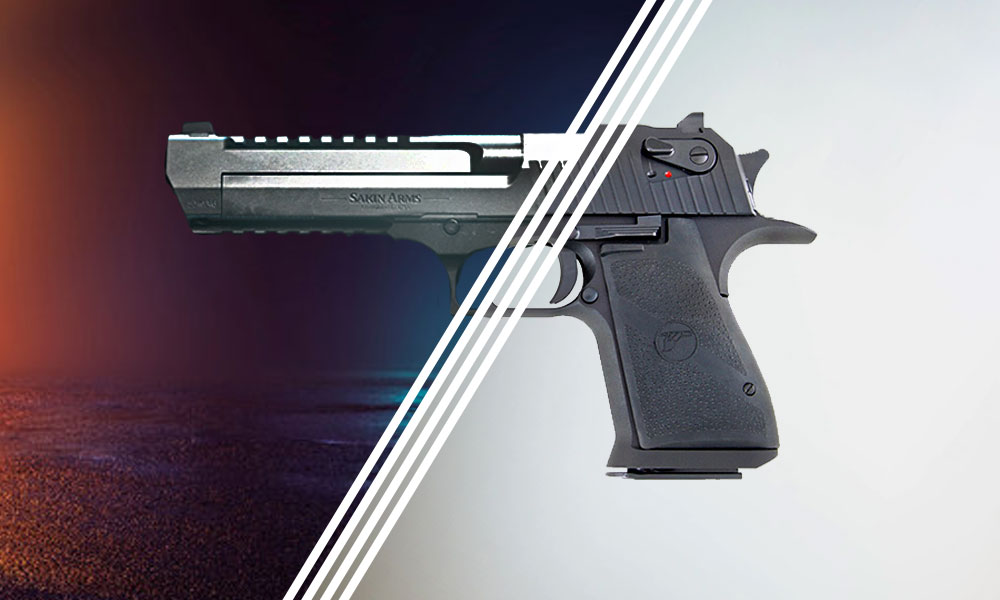 The .50 GS has several advantages that turn it into a worthy competitor for the X12. The handgun’s effective range exceeds that of the majority of submachine guns, and the hit that gun delivers is uncharacteristically high for a secondary weapon. One could say that the .50 GS owes its high performance to the real-life prototype, the Magnum Research Desert Eagle.

The Desert Eagle is one of Magnum Research’s signature firearms that appeared in a huge number of movies, TV shows, and other video games. Such popularity is well deserved, for Desert Eagle has got its users out of countless predicaments. Like every top-notch handgun, it combines astonishing looks with impeccable performance. It’s also as customizable in real life as in the game.