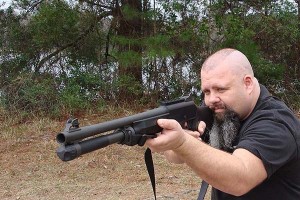 Throughout history, perhaps one of the most underestimated battlefield tools in the world is the shotgun. Traditionally, not as sexy as the sniper’s surgeon-like precision rifle or the heavy gunner’s belt fed full auto machine gun, the shotgun has often been an afterthought when it came to combat. To those in the line of fire every day, there is an obvious need for a versatile firearm that harnesses the power to breach a door as well as offer one shot stopping power on command. For anyone who has spent time shooting a combat 12 gauge shotgun, they know all too well, nothing else comes close. 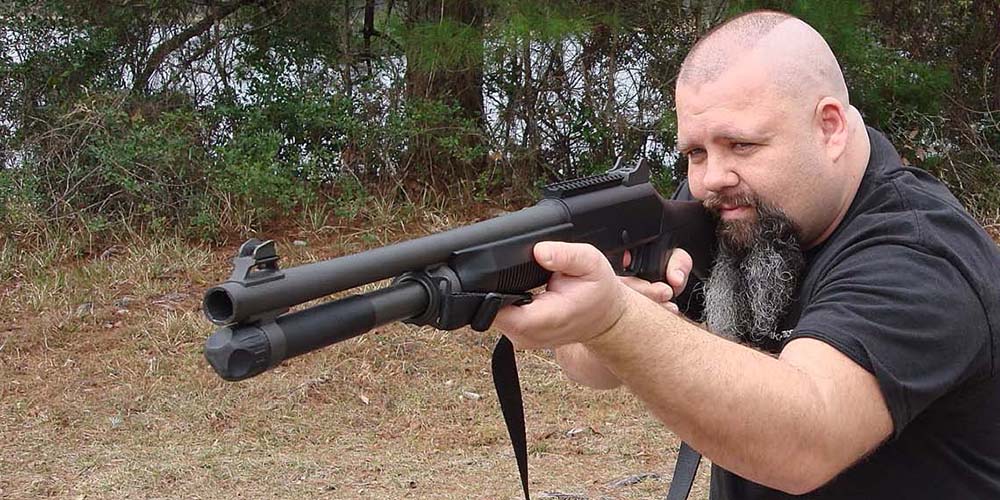 Common complaints about the shotgun during the heat of battle include usually being limited to 4 or 5 rounds, slow follow up shots and unfriendly controls more apt for hunting than reduced motor skill manipulation under stress. Ever since World War I, the 12 gauge pump shotgun has been in service due to its more reliable cycling than its semi auto counterparts have had to offer. By manually cycling the action, the operator could fire standard, low recoil, high brass, low brass, and non-traditional rounds through the firearm without feed issues. Although the pump shotgun has serviced with honor and success, it’s time has come to step aside to make way for today’s advancement in technology in the semi auto field. While no one disputes the 12 gauge chambering is the right platform for duty, several companies have recently been producing strong semi-auto contenders for military and police service contracts. This week, take at perhaps the most significant weapon platform in the history of the tactical shotgun in the form of the Benelli semi-auto M4 / M1014.

Italian firearm manufacturer, Benelli and its United States based division, Benelli USA have been producing some of the world’s top sporting shotguns for years, featuring a unique inertia driven action. When the U.S. Army’s Armament Research, Development and Engineering Center reached out to Benelli among several other top manufactures in May of 1998 for a new combat shotgun, the designers decided to step up and develop a new battle tool to meet and exceed military requirements. Given a strict list of features and performance standards to work with from the Army, Benelli decided to begin with a clean slate.

While Benelli already offered an excellent starting point with their Super 90 12 gauge semi auto shotgun, it had one downfall with its operating system. With an inertia system, the energy of the fired shell would directly assist in the operation of the firearms cycling. If the operator added lasers, flashlights and red dot scopes, it would add to the overall weight of the shotgun, which would absorb too much of the recoil of the blast to allow enough inertia left over to cleanly cycle the action. 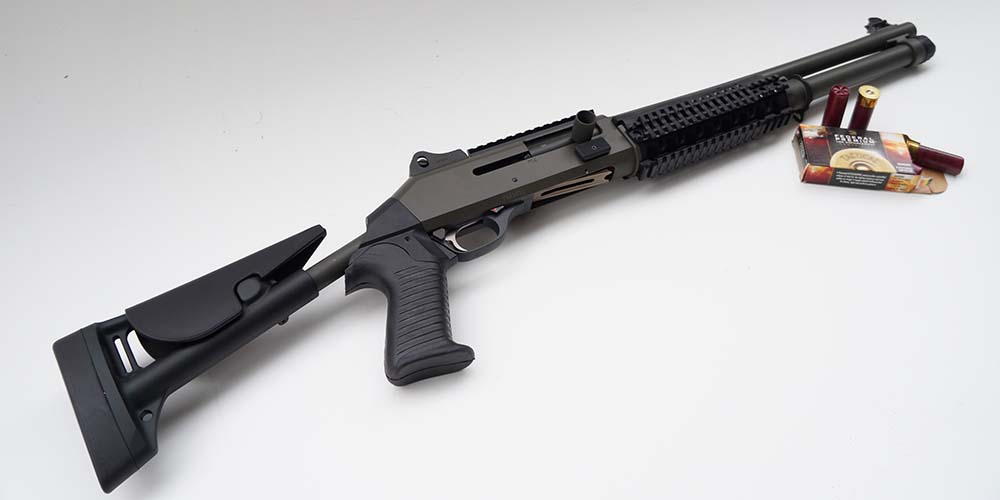 In late 1998, Benelli introduced the U.S. Army to its new M4 Super Combat shotgun. At the heart of this new firearm was the auto regulating gas operating system or better known as ARGO. Combined with Benelli’s rotating bolt used in all of their Super 90 series shotguns, this produced the world’s fastest and most reliable cycling semi auto ever. Through the use of bleeding off gases to operate twin stainless steel pistols to drive the action, the ARGO system offers a much cleaner chamber and well as a fail-safe by being able to function 100% even if one piston fails.

No longer dependent on inertia, the end user could now add needed accessories without fear of over loading the weight balance. Not only does the M4 handle the required standard 2.75 inch round, but can comfortably accommodate the more powerful 3 inch magnum buckshot round as added fire power if needed. To help control the speed and recoil of this new shotgun, Benelli added a pistol grip to its stock. This grip helps with any need for one handed operation, shotgun to pistol transitions and weapon retention. Standard features of the M4 offered are ghost ring sights which can be had with tritium night sights for low light shooting, a top mounted picatinny rail for optics and an optional collapsible stock. Barrel lengths and magazine capacity range from 18 inches and a 7 +1 shell capacity and a 14.5 inch barrel with 5 + 1 shell capacity for close quarter combat situations. The shotgun is offered in desert camo and matte black phosphate corrosion resistant finish.

By the end of 1999, Benelli beat out over 20 other competitors to win a military contract to provide the new M4 to select U.S. forces. Under the new military designation M1014 Joint Services Combat shotgun, the Army Special Forces and U.S. Marine Corps have battle tested over 20,000 shotguns without fail. Currently many of the world’s top Special Forces units including Italy, Brazil, Greece, Australia and the United Kingdom incorporate the Benelli M4 into their armament. 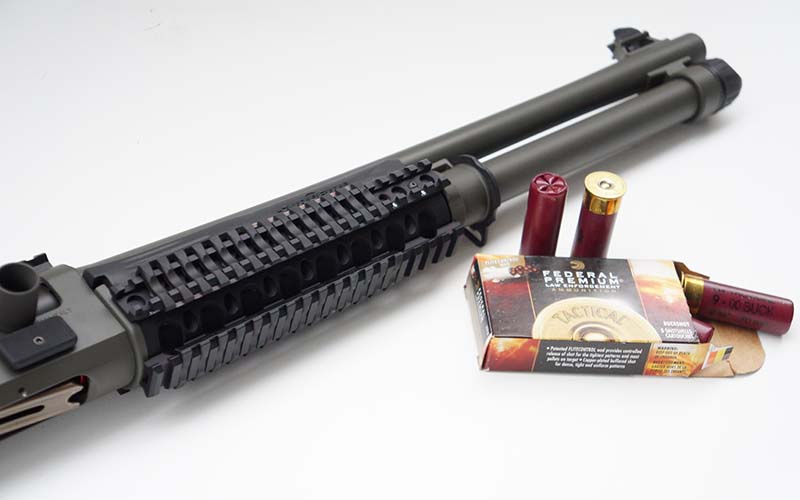 Field Testing the M4 for Duty

In December of 2009, I was fortunate enough to purchase a civilian version of the Benelli M4 while I was still working for my local Sheriff’s office. At the time, standard issue for my department was the tried and true Remington 870 pump shotgun. After competing in a few SWAT competitions and attending a high speed tactical shotgun school where the M4 was featured, I decided to upgrade to the Benelli. Once I qualified the shotgun for carry on duty, the head of training for my department decided to take a serious look at upgrading the whole department. I was invited to assist with doing head to head testing of the Benelli M4 against the Remington 1100 and 1187 in tactical configurations, as well as the Mossberg 930.

With the M4 being the highest price point with a retail price of $1899 US, it was saved till very last to shoot once the others were tested. At the end of the day, some of the shotguns would not cycle low brass; some would not cycle high brass, and most had problems with low recoil rounds. All the left-over rounds that caused problems were tossed into a bucket until the end of the range session. Finally, the head of training wanted to see what the Benelli M4 would do. Instead of selecting the best ammo to show off what the shotgun could do, I mixed up the “left over” rounds in the bucket up and randomly loaded whatever was in there. Seven rounds in the tube and one dropped in the chamber without any knowledge what which round was which prior to firing. As fast as I could squeeze the trigger and remain on target, I emptied all eight rounds in less than two seconds to the Lieutenant’s amazement without issue. According to the range officer, six of the eight shells were in the air at the same time during firing. To that comment, we reloaded and were able to have all eight in the air at once to show off its quick cyclic rate.

With features such as the ability to direct load a round in the chamber with a full magazine tube without issue, the sleek, comfortable pistol grip that helps keep the shotgun on target when taking multiple shots and handle quickly during transition drills, it is easy to be impressed by Benelli’s design. While limited funding to outfit an entire department forced them to go with the second best performing shotgun of the day, the Benelli certainly helped some understand my personal investment in the M4 was money well spent!