Skip to content
blog.GritrSports.com > How to Guides > Using A Tactical Pen
How to Guides 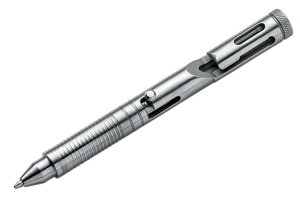 Conceal and carry isn’t for everyone. It’s a big responsibility, and there are times that for whatever reason carrying a concealed weapon isn’t practical. However, self-defense is everyone’s concern, and it’s good to have a plan for defense whether or not you conceal and carry. Self-defense classes can be a good start for some, but eventually you have to think about the advantages a weapon has in a self-defense encounter.

Pepper spray is a great tool for many, but if used incorrectly, it can blow back into your face and make a bad situation worse. It can also be used against you. Tasers can be extremely intimidating, but they aren’t always practical to carry every day. Tasers can also be used against you when an encounter doesn’t go your way. The best answer for some might be a tactical pen. It looks inconspicuous and everyone can easily carry one, but when you need to fight back, it can pack quite a punch. When you don’t need to use it like a weapon, no one will be the wiser that you have a dangerous weapon on your person. There’s no concern of “printing” when you carry a pen, and you don’t need a holster. Let’s break down the advantages of carrying a tactical pen and what you should know before you buy.

Above all else, a good tactical pen must be a good writing tool. If it’s like one of those pens you have to scribble with insistently before it will write, then it’ll probably end up in a cup on your desk and not in your pocket. The idea is it should fit into your normal life. You’ll sign checks with it and write down grocery lists before you go to the store. It will spend 99% of its life as a just a good pen. It will be your go-to pen and the one you’re careful not to lose and hesitant to lend.

However, in the rare instance that you need it as a weapon, it should be made of strong materials like aircraft-grade aluminum, steel or titanium. You’ll be able to strike an object or attacker repeatedly and the pen shouldn’t fail or break. Generally, one end is blunt and used for tasks like inflicting blunt force on an attacker or breaking windows. Using the blunt end will generally inflict less damage than the pointed end. The blunt end may also have a window breaking tool, which is a nice addition should you get trapped in a car. Some blunt ends even have DNA collectors so you can catch some of the assailant’s skin and use it to bring them to justice.

As you can guess, the other end is pointed and reinforced to be used like a knife when needed. This will also be the end you write out of, but the writing portion will be pretty irrelevant when the pen is used in self-defense. What will do the most damage is the metal cone of the pen, not the pen point itself. If it gets you successfully through a self-defense encounter, who cares if it writes again. More often than not, you could just replace the cartridge and the pen would write like new anyway. Some varieties of tactical pens have two pointed ends instead of a blunt and pointed end.

Any tactical pen should have a heavy duty clip to keep it firmly where you want it while traveling. It should be easy to retrieve in your pants or purse when needed. You certainly don’t want it bouncing around or buried in a load of change and other items in your pocket. One feature you might want to avoid is a cap. If you have to pull off a cap to reach the pointed end of the tactical pen, then you’ve probably given your attacker far too much time to react. A pen should be ready to go as soon as it comes out of your pocket. There isn’t time for anything else.

Using It In Self-Defense

You essentially have two positions to use a tactical pen from. We’ll call them “stab” and “jab.” Each position has its strengths and weaknesses that we’ll examine in a little closer detail.

When you use a tactical pen in a “jabbing” method, you hold it like a small sword. When your arm is straight down at its side, the pen will face outward towards the threat. This technique allows for a quicker strike once you’re ready, and most should be able to ready themselves for a jab motion slightly quicker than a stab. The downfall is the jab won’t generally have as much force as the stab motion, and this means you’ll only be able to use the sharp end not the blunt end for this technique.

A stab motion on the other hand delivers a harder blow on the threat, and both the blunt end and the sharp end can be used effectively with this technique. In contrast to the jab hold, the pen will face away from the attacker when you hold your arm down at your side. This hold could conceal the pen from the threat a little longer, but remember that it will take more time to hit them. You will have to bring your arm all the way up and then back down to strike a blow. With some practice you should be able to draw a pen from your pocket in a stab hold fairly quickly, but it might not be as fast as a jab hold. If you have some time before a potential situation escalates, you’ll likely want to ready the pen in a stab hold simply because it can inflict more damage. This will give you a better chance of stunning the attacker and getting away.

It can be tricky to know where to strike with a tactical pen, but if you’re given no other choice and you have to defend yourself, then you’ll want to strike without hesitation. Aim for key points like the face, neck, groin and solar plexus. In certain circumstances your best bet might be to aim for the hands. Whatever you do, don’t stop striking until the attacker stops, but always be looking for a way out. You want to get clear of the attacker and call for help. If they are shocked or hurt, now is your chance to get away. Running is always the best option if it is available. Do not continue to strike the attacker if they have stopped or are hurt. If you cannot control yourself and you continue to strike and kill the attacker, you may face criminal charges. Only do enough damage to get out of there as quickly as possible.

Don’t be fooled, a tactical pen is considered a dangerous weapon, and there are some risks to be aware of before purchasing one. You can’t carry a tactical pen on a plane. Make sure you don’t treat it as a casual pen in your carry on bag. The TSA won’t be happy about that misstep. As we said earlier, using excessive force on an attacker will not look good in front of a jury. Practice how to use the pen and consider taking a self-defense class that teaches proper use. Just like concealed carry, using a tactical pen has its risks and responsibilities. If you don’t think you’re ready for them, your better bet might be physical self-defense classes or pepper spray.

Now that you know the basics, do you think a tactical pen is right for you?