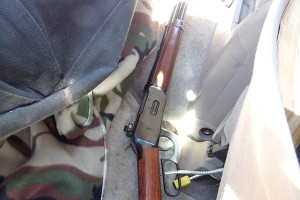 A truck (or trunk, depending on what you drive) gun is a firearm kept in a vehicle for defensive, sporting, or pinking use. They predate trucks and cars – no cowboy traveling in wild country went without his lever action carbine on his horse, and no rancher went without his trusty double barreled shotgun in his wagon. Truth be told, the double barrel shotgun is really the gun the “Won the West.” For sheer versatility in defense and hunting small and medium game, combined with it’s low cost, it was the one gun everyone had. The sodbuster (1st farmer) could not afford a pistol and a rifle and a shotgun, but he could make due with a shotgun. But I digress.

Even in modern times, folks carried spare guns and ammo. Famous writer and handgun experimenter Elmer Keith has written that, while cowboying in Idaho, he left every morning with 100 rounds of ammo, and came in every evening with 100 rounds of brass. This, of course, was the reason he was such a fine shot – how good would you be if you fired 100 rounds every day?

As we moved from horseback to car, we had more room for gear – and guns. The recent West and South had a gun rack – with a gun or two – in almost every pickup truck. While these racks have fallen out of favor for security reasons, lots of folks carry a long gun in their car or truck “just in case.” Most of us go too many places where we cannot see our vehicle from the store or restaurant to leave a gun in plain view.

“Just in case” has changed as well. It used to be a general sense that “I may decide to stop & do some practice shooting,” or “I may see some game for the table.” These too have been left behind with more regulations on where you can lawfully shoot, and the need for licensing and tags for hunting. Today’s just in case has more to do with personal defense. As we see fewer people with morals and standards, we see greater risk to our safety. Even worse than the fear of criminals is the fear of terrorism.

The truth is that you are very unlikely to be attacked – but the odds, while low, are NEVER zero. You are even less likely to be involved in an act of terrorism – but again the odds are never zero. We carry spare tires, just in case of a flat – but when was the last time you had one? I carry a fire extinguisher, which I have employed exactly one time in 51 years of driving. But I was sure glad I had it when I needed it!

After insuring you have that spare tire (and jack, tire tools, and knowledge), that fire extinguisher (with some training), and a first aid kit (with training), your choices of firearm(s) are limited by an honest evaluation of:

Can you overdo this? You bet! But the decision is up to you.

I know one gent who lives in a major city with a low crime rate. He has high level training and is very aware of his surroundings. His every day carry handgun has been modified to his preference, and his spare ammo, flashlight, and cell phone never leave his person. He has decided that an AR15 with 3 spare magazines must be in his vehicle at all times. Is he wrong? Nope. His choices are different than mine, but not wrong.

How about the fellow I heard of who carries two handguns and spare ammo, and in his car, he has an AR15 and his legally registered, cut down, belt fed M60 machinegun with a 100 round belt on board? I don’t know him, nor what he does or “who he is,” but his perception of his personal threat level makes him feel all this hardware is right – for him. Since an M60 runs from $15,000 on up – way up – my choices would also be different.

On the other extreme are the folks who take an old, rusty, single barrel shotgun with one round in it, carelessly toss it under the seat without ever having fired it, and think they are ready. No, I don’t think they are! But you do not need a really high end gun in your car either.

You need to really think about when you would access your truck/trunk gun. Clearly, if someone is already holding you at gunpoint, they are unlikely to let you dive into the trunk of your car to get your trunk gun. Suppose you hear gunfire in the distance? Why would you drive to the sound of the guns? Could that be the police subduing an outlaw? An armed citizen defending themselves? How about an undercover or off duty officer taking action? In two out of three of these situations, if you drive up and exit your car with a gun, you are likely to get shot! While we may have a romantic, TV inspired vision of driving to the rescue (of a supermodel, who instantly falls for you), the reality is far, far different. Only law enforcement officers have a mandate to drive toward the gunfire – you may help them best by staying out of the way.

The first consideration in making a choice is what is your skill level? Can you efficiently use a handgun and to what distance? Remember, your choice of gun has nothing to do with the confrontation you will face! The outlaw(s) will set the time, place, and distance. The fact that you prefer a rifle will not change the fact that a momentary lapse in your awareness means your confrontation will take place at 7 feet! So, a skilled pistolero may choose more ammo, or a full sized iteration of his/her every day carry gun for a car/truck gun.

Where you go and what you do are major factors in your choice. We live in a fairly remote area, where a rifle would be useful. A shotgun would not be a good choice, as even here confrontations tend to be either close (7 yards down to contact distance), or very far (100 yards plus). Thus they would be too close for a rifle or shotgun, or too far for a shotgun.

If we lived in suburbia, a shotgun could be a better choice, as shotgun pellets do not travel as far or penetrate walls as easily as pistol or rifle rounds. Within their usual envelop of 0 – 15 yards, they are perhaps the best choice.

If we lived and worked in a city, then my first choice would be a pistol, with a rifle in the car. But I have spent a lot of time on the rifle range, and I have always have preferred a rifle to a shotgun. Obviously, your results may vary.

Ultimately, only you can evaluate your lifestyle and living conditions to choose the right car  gun for you! But I do NOT recommend a finely tuned, customized gun. In fact, I suggest a plain production gun designed to operate with dust and grit on/in it. Think of the environment you are putting it in – dust, dirt, perhaps mud and snow will build up around it. Putting it in a case will slow access, because when you need it, you will really need it! A plastic bag can keep the dust & dirt and moisture out, but they also keep the moisture in, and a gun that is rusted shut is useless. I recall a law enforcement agency that had their officers keep their shotguns in the trunk. Seems they got new cars and the trunks were not watertight! A dozen shotguns had to be cut out of their cases, and refinished.

Most truck and trunk guns are found in the used gun racks – showing use but still completely serviceable. Never overlook such guns as police turn in handguns, older lever action rifles, and worn but serviceable pump shotguns. Worn does not mean ‘worn out’, but you may need to have them checked by a gunsmith – some shops will do this as a courtesy, or for a small fee.

If used guns are in short supply in your area, there are lower priced guns that will serve you well. They may not get “pride of place” in your collection, but they can save your life! The Diamondback DB9 is one that is popular for both carry and car gun use. The Hi-Point guns are, well, bulky and ugly, but if properly lubricated and fed good ammo, all the ones I have seen have worked – every time!

As honest gun owners, we must strive to NOT be a source of guns for criminals. Period! This means that your truck/trunk gun must be both undetectable and secured by more than closed windows and locked doors. The problem is combining security and access.

Of course, locking up and concealing the gun means what? YES, you must practice accessing your gun! I suggest you do this in private and absolutely with an unloaded gun! Don’t scare the neighbors. Unload the gun, as your insurance company is unlikely to want to replace the door you destroyed off your new car “by accident.” Such practice will also show you how long it will take, shaping your planned reaction in a defensive situation.

I have already mentioned learning how to access your gun – but how familiar are you with it? If you are a skeet shooter, are you prepared to use the rifle in your car? If you hunt with bolt action rifles, can you be effective with your shotgun? As with most of life, training is ½ the solution. The other ½ is practice – until your response is a reflex. If you chose a single barrel shotgun, practice not just shooting it, but reloading it as well.

If buying a violin does not make me a concert level violinist, why would I think buying a gun would make me an expert, or even a competent shot? Mess up on the violin, and you get embarrassed. Mess up in a life and death confrontation, and you lose everything. And practice with your truck/trunk gun – it will force you to insure it is lubricated and not encrusted with dried mud and rust!

We are still a (mostly) free country, and you get to make all these decisions. A truck/trunk gun may not be right for you, but if it is, choose wisely.