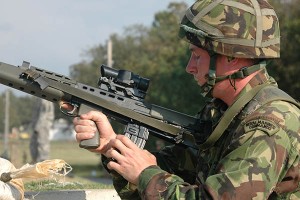 NATO and Commonwealth militaries consolidated to common ammunition types after World War Two as a means to help mutual allies with supply. Despite this, each military uses different rifles to launch this ammo. Here are examples of rifles used from three different countries.

Combat experience from World War Two indicated infantry should be armed with light, select fire weapons with greater effective range than submachine guns but not needing the long range power common in bolt action service rifles. Enfield engineers saw the bullpup design as a way to retain accuracy while reducing overall length. A significant development of this program was the EM-1 and EM-2, also known as Rifle No.9 Mk1 or “Janson” rifle. The EM-2 was adopted by Great Britain in 1951 in limited numbers as the world’s first issue bullpup rifle. However, pressure by the Americans for NATO to standardize 7.62x51mm, a full power battle rifle cartridge that the EM-2 was not easily adapted, led to UK forces adopting the L1A1 Self Loading Rifle (SLR), a FN FAL variant, instead.

Experiences in Asia through the 1960’s motivated militaries to reconsider intermediate cartridges. The Brits originally barreled the EM-2 for .280 British (7×43 mm), experimented with a 6.25x43mm cartridge and then an even smaller 4.85mm round. During this time NATO agreed to adopt the Belgian loading of the 5.56x45mm (SS109.) Royal Small Arms Factory engineers evolved the EM-2 and SS109 into the SA80 (Small Arm for the 80s) series of weapons, which include the L85 Individual Weapon and L86 Light Support Weapon. Borrowing ideas from the EM-2 and staying with the bullpup concept, the internals were designed similar to the Armalite AR-18. As with every bullpup rifle, the primary advantage is overall compactness without compromising barrel length. In the case of the L85, overall length is shorter than the M4 carbine while the barrel remains longer than a full size M16.

The first prototype, dubbed the XL65, was chambered for a proprietary 4.85mm cartridge, essentially a necked down 5.56×45 case, but the NATO trials ultimately resulted in adoption of the Belgian SS-109. The first SA80-series rifles chambered in 5.56mm were issued in 1984. Much like the M16, a host of problems plagued the first series of SA80 weapons forcing their removal from the NATO’s Nominated Weapons list. Heckler & Koch was contracted to fix the problems, releasing the A2 variant. The upgrade involved replacement of many internal parts to increase reliability making it, according to Jane’s Defence, among the most reliable issued bullpup rifles. The British Army’s Infantry Trials and Development Unit found the H&K A2 improvement had a Mean Rounds Between Failure Rate of 2,719. In practical terms, the British Army shooting team churned 62,000 rounds through their L85A2s at an International match at Bisley without incident.

These facts aside, old rumors die hard, especially in military circles. Retellings of Vietnam-era horror stories by the pseudo cognoscenti are still circulated about the M16 despite the “problems” having been corrected a quarter century prior. Considering the L85A2 fix is more recent we’re destined to see outdated grumblings for years to come. However, in shooting with and talking to real marksmen with actual hands-on experience (British military personnel skilled enough to earn assignment with a shooting team) the current L85A2 is a reliable piece of kit. What’s more, this rifle in combination with the SU.S.AT sight is regarded as one of the most accurate general issue combat rifles in the world. British troops have told me that since its adoption the Ministry of Defence has increased the standards needed to qualify. Contrast that to the U.S. Department of Defense which has consistently retrograded marksmanship qualifications.

The L85 is a short stroke gas operated, magazine fed, selective fire 5.56mm bullpup rifle. The receiver is a reinforced stamping with machined inserts and the three-position gas regulator can be set for rifle grenade launching, adverse and normal firing conditions. A heavy machined carrier, housing the rotating seven lug bolt, rides a pair of steel guide rods with a single return spring in between and a charging handle on the starboard side. A2 upgrades include a redesigned charging handle and reinforced extractor to prevent stoppages.

The barrel is rifled for NATO-standard ammunition and the flash hider allows for rifle grenade launching. STANAG (Standardization Agreement) magazines, similar to the M16, have a 30 round capacity. Both the mags and housing were beefed up in the A2 fix. In an attempt to improve reliability and stability during automatic fire, a slight delay before hammer release occurs when firing full auto. The fire mode selector is located at the left side of the receiver behind the magazine housing and a cross-bolt safety button is located above the trigger.

The L85A2 features a floated barrel and is inherently accurate. When shooting prone, British team shooters use the magazine on the ground as an additional base of support and get their support hands so far forward that some tape their fingers to prevent burns from barrel heat. Shooting in this fashion the Brits are capable of bench rest steadiness and extract every bit of performance a good L85A2 has. Alternative sighting systems, including back up iron sights and a detachable carrying handle, are available. The L85 can also be fitted with an H&K-designed, under-barrel 40mm grenade launcher or bayonet. In addition to the primary L85 variant, the SA80 IW also appears in a shortened Carbine version and a manually-operated, straight-pull L98A1 training rifle.

The most recent equipment upgrade comes courtesy of Daniel Defense, a small arms accessories manufacturer located in Black Creek, Georgia. Founded in 2000 by Marty Daniel, Daniel Defense produces the M4 Rail utilized by the United States Army Marksmanship Unit for the precision Designated Marksman rifles built for that program. After securing and delivering on that contract, the company began supplying components for the U.S. Special Operations Command SOPMOD project.

Recognized as a manufacturer capable of meeting stringent AMU standards, the Armed Forces of the Crown sought to bring their L85A2s into the 21st Century by adding a rail. Nothing ups the CDI (Chicks Dig It) factor like taking a light, handy carbine and doubling its weight with easily attached sights, lights, grips and other cool “necessities!” In all seriousness, the Daniel Defense L85 Rail Platform is a needed upgrade that makes the weapon a fully modern modular system. A carbine with this rail is known as a L85A2E for “Evolve” and allows utilization of all the usual suspects of lights, lasers, pistol grips, bipods, and other optics, including the U.S.-issued ACOG. The LLM (Laser Light Module) on the rail has pockets for pressure switches to keep the pads and wires out of the way. Finally, there is a STANAG rail to Picatinny conversion offering more accessory options. To date, Daniel Defense has delivered 32,000 units and has an order for 30,000 more.

The only real downside is the inability to switch shooting shoulders, but that is a trade off with nearly every bullpup design. With H&K’s A2 rebuild these are reliable carbines and the new Daniel Defense Rail Platform is a complete modern update. The L85A2E is an evolved carbine truly worthy of Her Majesty’s Armed Forces.