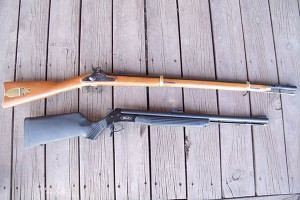 I have previously written about the guns of a “Pistolero,” which I defined as a person who is reasonably expert with all kinds of handguns. Handed in any kind of handgun, modern or historic, the Pistolero knows how to operate most of them, and can turn in a credible performance with any make, model, and caliber. Now, I want to turn our attention to the same thing for those who choose the rifle.

Of course, this means dedicating hours and hours to learning about guns, and shooting thousands of rounds. No one can master all the differing rifles, but a true Maestro of the rifle can handle them with aplomb. To reach this level, there are certain guns that the apprentice will need to have extensive experience, best maintained by ownership.

I chose the word Maestro because with the vast increase in the number of women taking up shooting, Rifleman seems to ignore a large segment of the shooting public.  Many folks choose to specialize, either in hunting, target shooting, competition and the like, but the Maestro can shoot any of the tools well.

Just as with pistols, the Maestro of the rifle should start with a .22. Back in the day when I started, .22 rifle bullseye was THE game – today, not so much. But practice in the various positions of prone, kneeling, sitting, standing unsupported, standing supported, and using improvised field rests requires a lot of rounds down range, and a .22 is the way to go.

I use a Marlin bolt action rifle as my basic trainer/refresher rifle, for several reasons. It is inherently accurate, with the outstanding Marlin trigger. It comes with both iron sights and a scope, so I can work with either kind of sight, and it uses a box, rather than a tube magazine. Thus it keeps my skills with a bolt action sharp, while using economical ammo. Plus, when introducing new shooters to the sport, the box magazine is much safer – if the bolt is open and the magazine removed, we both know the rifle is unloaded. With a tube magazine, you must work the action numerous times with the magazine spring inserted to make sure there is not one more round hung up in the tube.

Of course, if you have an AR15 type rifle, you can invest in a .22 conversion kit, or even a dedicated .22 upper. Since an AR must be part of your “stable,” this may work better for you. I have no qualms about using a conversion kit, both from my own experience and that of others. A gunsmith reported that, when questioned about this, he removed the conversion kit from an AR that had been used with .22’s only for years. With the 5.56/.223 bolt carrier group installed, the gun ran 100%, without even a cleaning.

The down side is the rifling twist is not ideal for .22, and the bore diameter is just a tiny bit large. In short, a conversion kit is not likely to be as accurate as a dedicated .22 rifle. And only accurate rifles are interesting.

Next up is a center fire rifle – a bolt gun. Now considered useful mainly for hunting, I daresay there are more bolt guns in the world than any other type. So, a Maestro of the rifle needs to know how to run one, and shoot it well. Most all of them have a scope mounted, so I would go with a rifle with a scope, in a ‘major’ caliber – .270 on up. It need not be anything fancy, and with the newer guns on the market, you could buy something with a short, handy barrel in a fiberglass stock, in the chambering of your choice. There are bolt guns that, like the Marlin, come with a reasonable scope mounted. Unless you want to shoot at extreme ranges, or get involved in some of the other shooting sports where precision is required, this can be a (relatively) inexpensive addition.

Finally, under this category, is “America’s rifle,” the AR15, also know as the Modern Sporting Rifle (MSR). The modularity of this rifle is it’s true forte – you can have one lower (the serial numbered part), with a short upper for home defense, a long upper for precision shooting, and a mid-length for 3 gun competition. And, they can all be in different calibers! .223/5.56, 300 Blackout, 6.5 Grendel, the list grows every day. In the larger, AR10 format, it includes .308/7.62 NATO, 30-06, and bolt action uppers in everything up to and  including .50 BMG . Sights, grips, stocks, forearms – almost every part of the rifle is easily replaced. Everyone should have one – or more!

Once you have the basics, it’s time to expand your horizons. My next rifle would be a lever action. No, it’s not just the cowboys who used  them, well into the present day the lever action is the rifle of choice in the dense woods of New England for hunting. Plus, a significant number of folks choose them for personal protection, feeling they are fast handling, shoot useful calibers (including pistol rounds), and don’t look scary to a jury if they are forced to defend themselves. Plus, they are FUN. For hunting, the 30-30 is popular, and it has ballistics close to the 7.62×39 used in the AK47. My choice here is a carbine length .44 Magnum, which I use for fun, Cowboy Action shooting, and defense against the predators (no/2/4 legged) around the ranch. Some friends went fishing in Alaska, and a pair of lever action carbines in 45-70 went along, in case the bears did not like the competition for food.

The next gun is … A single shot, large bore rifle. I like a Sharps replica (yes, I got mine after the movie Quigley Down Under came out). There are also original and replica Remington Rolling blocks on the market. There is just something about well shaped wood and blued steel that no AR can match. Plus, launching those 500 grain lead slugs down range appeals to me as much as running through a full magazine of 5.56 ammo – perhaps more! And when 500 grains of lead hit a steel target at 500 yards, the “ring” is memorable. So a big bore single shot rifle should be in your safe!

The final rifle every Maestro should own is a muzzleloader! Yes, high speed rounds and full capacity magazines are great, but sometimes the most satisfying day is spent pouring powder down the muzzle, loading a pure lead ball or Minnie ball and ramming it home, capping the piece, and letting fly! That big cloud of white smoke slowly dissipates to reveal your mastery of follow through, as it is a comparatively long time from trigger pull to projectile exit. At they really “smack” the target, be it paper or steel!

My wife prefers a modern, straight line rifle which can be fitted with a scope. Since I collect military arms, I use a replica Civil War Zouave rifled musket. Either is FUN!

Of course your choices may differ – and I would like you to share them with us! These are mine, and when you can handle these rifles with style, it’s likely you can hit well with any rifle! It’s Spring, lets get outside and SHOOT!