Skip to content
Blog.GritrSports.com > How to Guides > The Basics On Back Up Sights
How to Guides 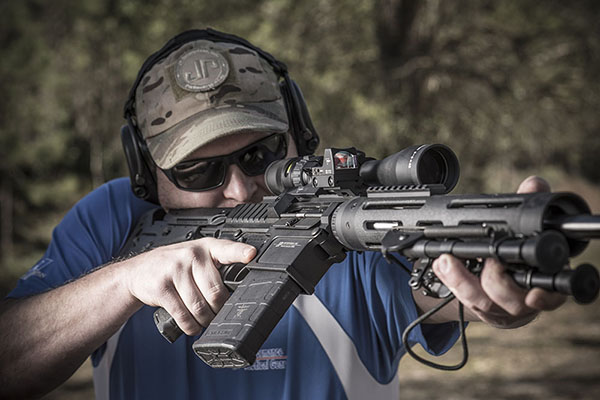 There was a time in the history of shooting when all training was performed with iron sights. Optics on a rifle used to be considered exotic and used by snipers, sharpshooters or designated marksmen. This began to change after night vision became accepted by the US Military. Eventually red dot or holographic sights gained acceptance through special operations units and then cascaded over to the line units.

Much of this had to do with the quality of available optics not being up to a military standard. Yet even in this day and age, when red dot sights or holographic sights are making inroads into the civilian market and most black rifles are shipping without irons, there is still a need for back up sights should the optic become unusable.

Note that unusable does not always mean “fail.” Sometimes a telescopic sight is set up for long distance shooting, and it becomes unusable for a quick close range shot. This can be in either a military or hunting situation, and fortunately we have options for back up iron sights that can be used on almost any rifle.

The earliest back up iron sights were the hind part of a detachable carry handle that could be added to or removed from the rifle as needed. In a relatively short span of a few years, companies such as ARMS, La Rue Tactical and many others began offering spring-loaded back up iron sights that stayed out of the way while the optic was in use, but could be activated by pressing a button, flipping a lever, or any number of other means.

Some of these sights utilize radioactive tritium so they can be used as night sights, while others utilize fiber optics to gather ambient light to make the sights more usable in low-light conditions. Tritium night sights are available from companies such as Trijicon and Meprolight. These sights typically replace the existing front sight post and rear sight aperture on factory sights and most aftermarket types.

Most BUIS sights can be co-witnessed along with an electronic red dot sight or a telescopic scope when they are deployed. This is desirable in the event that the main optical sight is damaged or unusable and cannot be quickly detached from the rifle. Some shooters have gone a further step in utility by mounting a secondary set of BUIS or an extra carry-handle sight along the side rails of their Picatinny rail equipped forends.

All things “Tacticool” flow from MagPul. In a departure from making BUIS from metal, MagPul went the route of engineering them from their own proprietary plastic formula. These sights are lightweight and less expensive than the metal offerings.

I first became aware of these in 2009 while building a special rifle for a good friend. During the build, I became concerned with the extra weight that was being added to the rifle. Someone mentioned MagPul over ARMS and we ordered a set. When we saw they were plastic, we were a little crestfallen. However, considering the rifle was running a mini Trijicon ACOG (Advanced Combat Optical Gun sight), we tried them anyway. 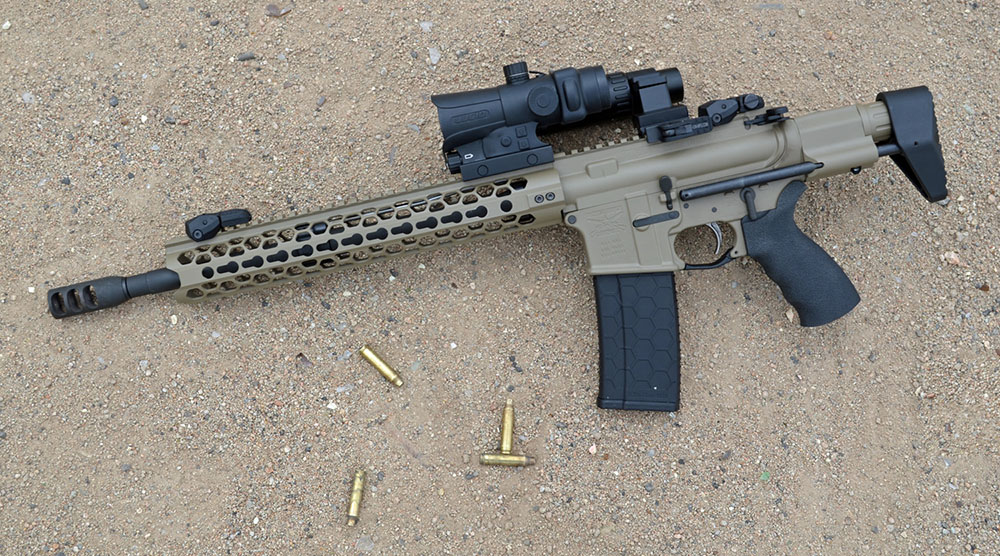 Surprisingly we were able to mount a Trijicon tritium front sight post into the plastic body to make the sight useful in lowlight conditions. The best part was that they were a fraction of the price of what we were used to in metal back up irons.

Some factory BUIS are made by the companies I mentioned above and come standard on many rifles. Others like those found on the S&W MP15/22 are usable but leave a lot to be desired in the looks department. These are rugged fixed iron sights that attach to the rails, but do not collapse.

Many factory rifles like those from Ruger and Mossberg come with installed iron sights that can be used if the shooter mounts “see-through” rings on their rifle.

Trijicon’s RMR works as both

The Rugged Mini Reflex sight (RMR) offered by Trijicon is a sight that can perform both roles on two different platforms. Some shooters choose to piggyback the RMR on top of their Trijicon ACOG or mount an RMR on the side rail of a carbine running a magnified scope. In essence they run the RMR as a backup optic in case the primary sight is unusable. The RMR can be mounted to a pistol slide and the factory irons can become backup sights to it as well. 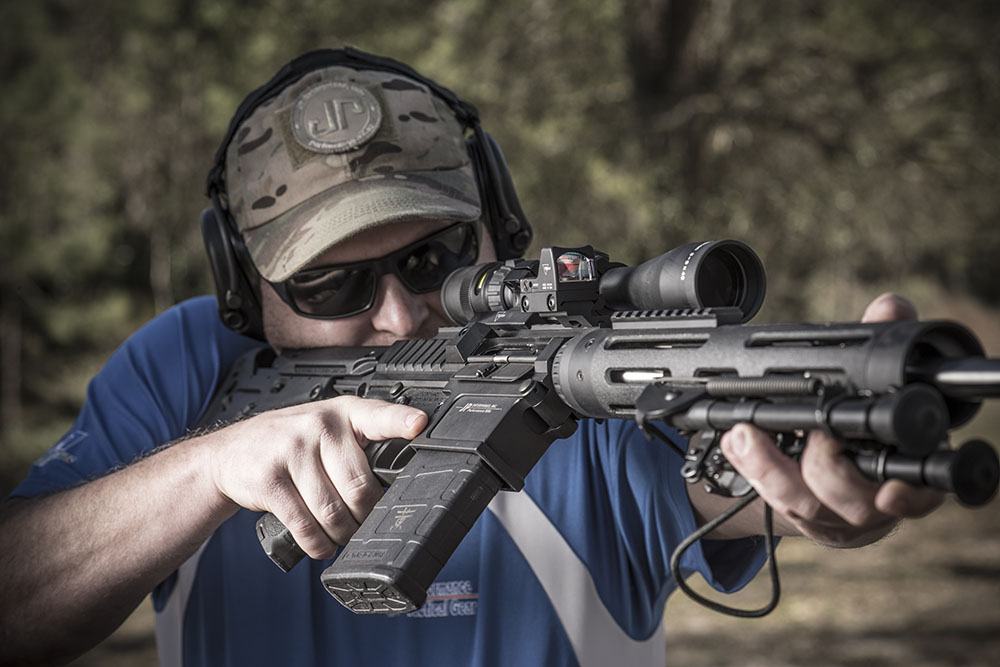 It is a very rare occasion when I see a scientific study by a university speaking to the effectiveness of anything firearm related, yet two professors from the Department of Justice Studies and Sociology of Norwich University released a compelling report in 2011. This paper examined the effectiveness of traditional iron pistol sights as opposed to a mounted holographic sight. The results showed that there was a statistically significant difference favoring the holographic sight for all of fire.

The two professors took 27 college students and equipped them with 9mm handguns. They were Glock 19s and were selected because of their relative ease of use. Fourteen of the subjects used a Trijicon RMR mounted on the slide and thirteen used iron sights on FBI or IDPA silhouette targets for four different stages of fire. 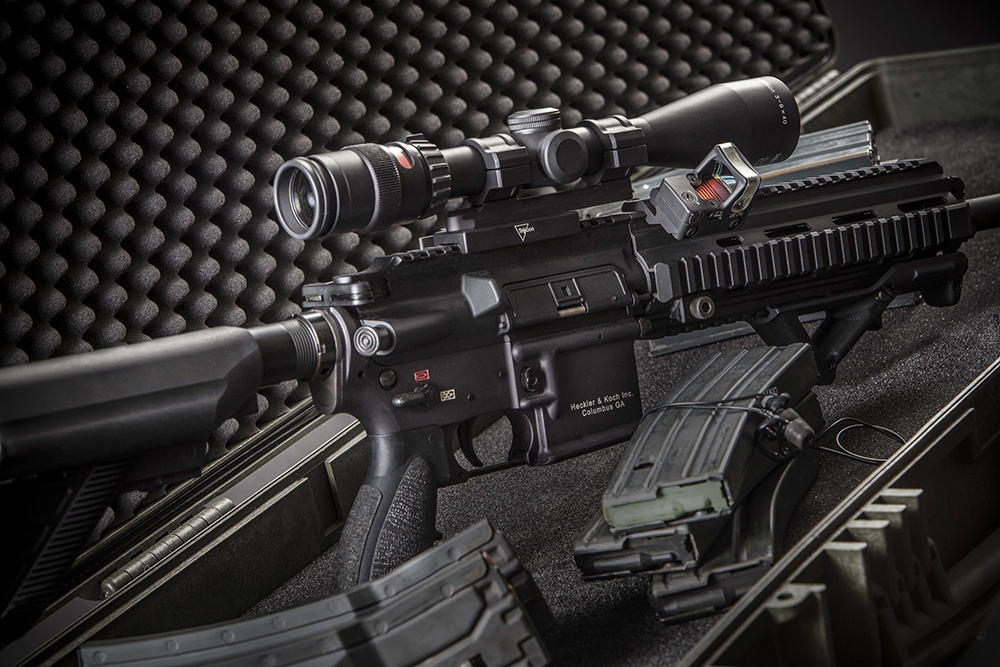 Roughly half the students had a shooting background of some type whether it was military, law enforcement, target shooting or hunting. Each of the groups (iron sights and RMRs) were subdivided with half of the shooters being experienced and the other half being novices. The results suggest that trainees in military and law enforcement specialties may gain proficiency more quickly and efficiently with the RMR. The results held that the RMR worked better for the experienced shooters as opposed to the beginners who were shooting a pistol for the very first time.

Trijicon’s RMR was most likely more effective as it eliminates the hassles of sight alignment from the perspective of aligning both front and rear sights out of the equation and moves straight to acquiring a sight picture.

The author has found the RMR to be more advantageous at distant and moving targets, which is why I recommend them as an option to co-witness with existing iron sights on most pistols for a more “offensive or tactical role” and using the irons for closer range defensive shooting. However, they can play the same role on a rifle, and Trijicon makes a mount to position these on their ACOG for just such a purpose.

As these types of sights will continue to improve with regard to battery life, durability and accuracy, the author thinks we will soon see them as a standard on most pistols in the future and as an electronic back up sight on most rifles.

As for what range to zero, the United States Marine Corps recommends using the 300 yards setting for what is referred to as “Battle Sight Zero” or BZO. Shots fired at shorter ranges can be aimed lower on the target in this setting, whereas further targets would require the shooter to aim higher for the rounds to impact on target.

These ranges are arbitrary and may be adjusted depending upon the shooter’s needs. Likewise, the sights do not need to be mounted atop the receiver, they can be mounted on side rails and if zeroed properly, the shooter can cant the rifle in order to use them.

The use of iron sights has traditionally been taught as the first step in basic rifle marksmanship. However, this trend is changing. Optical sights and scopes have evolved by leaps and bounds over the course of their history, and many new shooters are beginning with optics as opposed to iron sights. The fact remains that optical sights can still fail due to breakage, battery life or zero can be lost if the rifle is dropped; similarly a close range target may make the scope useless and the shooter needs to go to irons quickly and seamlessly. Knowing how to correctly use iron sights is a shooting fundamental that every shooter should take to heart.