Skip to content
blog.GritrSports.com > How to Guides > Survival 101 – Part 2: The Paralysis called FEAR!
How to Guides 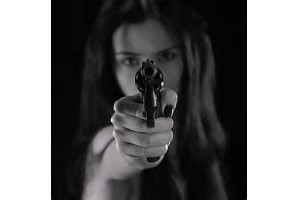 And the Antidote called ANGER!

Have you ever been so afraid that you froze on the spot and could not make a sound or move a muscle?  Your heart rate and blood pressure increase as you feel a rush of warmth overwhelm you.  It’s not the warmth you feel in front of a roaring fire or under an electric blanket.  It’s very similar to a hot flash or night sweat that menopausal women experience.  However unlike the body responding to the loss of Estrogen, the warmth you feel is produced by the sense of fear your mind detects and begins the coursing of adrenaline, cortisol and dopamine through your body.  You are preparing for the only two options you have: fight or flight.

Your brain has perceived a threat, so it is preparing the body for the response. Perhaps you were blind-sided, caught unawares and you’re having to play catch-up in your thinking. You’re flashing on news reports of serious injuries to victims and you’re seeing yourself in the same situation.  As your heart and lungs work harder and your blood pressure increases, you’ll start to sweat and your muscle groups will tighten to limit your mobility.  What you observe going on around you will appear blurred as your focus narrows.  What you hear may be distorted.  Time will slow down with a time-spatial distortion which will affect your decision making.  You’ll start to question whether this can really be happening to you and all the time, fear will allow a slow gradual paralysis to set in.  Your body’s reaction will continue until your brain recognizes no threat exists and you can “stand down.”  But if the threat is valid, the fear associated with it can consume you.  Fleeing is not an option as you take on the victim mentality and physically submit.  The only way you will survive is to change your thinking process to one of survival rather than submission. You need to get angry.

The antidote for fear is ANGER.  Both fear and anger are physiologically and psychologically fueled the same way.  The adrenaline rush you feel in fear is also felt in anger.  The difference being that fear freezes you, and anger empowers you.  Fear will draw you into a fetal position whereby anger will help you “put the gloves on.”  Have you ever been angry at your sibling, spouse or child?  The strength you feel when you’re angry at them is the same strength you need to cultivate to project your response towards the object which has threatened you.

In order to “put the gloves on,” you must consciously kick fear out of your psyche, by flipping your feelings.  This is not a particularly easy thing to do, since our mind is so powerful and rules our lives both awake and asleep.  Therefore you must consciously mind-speak to yourself and train yourself to respond to it.  There is nothing wrong with saying to yourself out loud: “No, I did not ask for this.”  Other mind-speak may be: “You’re not in my appointment book today, I did not invite you into my life.”  “Leave me alone.”  Get angry at being imposed on and taken advantage of.

Many women have been taught to be kind, empathetic, benevolent, patient, soft spoken, non-judgmental and to submit rather than resist.  To flip their feelings from fear to anger goes against how society has socialized them to act.  This takes training and is very difficult for many to master.  Luckily society is rethinking its morales, values and ethics when it comes to personal protection.  It has only been within the last few decades that women have received permission to be strong in their stance.  They’ve been given permission to stop being a victim.  That’s why the largest statistic of those seeking firearms training are women.  They are also the largest percentage of firearms purchasers to date.  In fact, the FBI Uniformed Crime Report now recommends to women that if they are going to be victimized, they must fight like they’ve never fought before in order to survive.  The physical training is great, but the training of the mind is just as important.  Learn to flip those feelings.

One of the easiest ways to learn flipping feelings from fear to anger is to use visualization.  When you visualize scenarios, act them out in your mind and process through to success. You’re training your mind to recognize cues and act on them.  This is very similar to visualization in relaxation, whereby you imagine yourself in a serene location, with deep breathing, and positive mental statements being repeating over soft music.  In this case however, that Pina Colada on the beach in Cancun has been replaced with a gang of lowlifes, stopping you on the sidewalk, demanding money or sexual pleasures.  Perhaps it’s a home invasion, a car-jacking, or you’re just being in the wrong place at the wrong time.  You must prepare for the worst case scenario, but hope for the best outcome.  Use visualization to prepare yourself for the possibility of being a victim, but pre-plan the result whereby you are the victor.  By training your mind, you’re training your body’s response.  We prepare for fires, earthquakes, tornadoes and hurricanes.  We must learn to respond appropriately in our personal protection as well.

Now it is important to address another facet of anger, called rage.  You can’t cross that fine line that separates anger and rage.  Anger can build to the point where you’re empowered to respond to the threat with the necessary force to stop the threat.  However when anger steps over the boundary into rage, you’ve lost control of yourself and subsequently the outcome of the encounter may go beyond the bounds that society will accept. Rage will not benefit you and possibly lead to legal implications.  Rage in the form of excessive force, whether physical or by the use of a firearm, will not be permitted by society when just a little force might suffice.

Learning to redirect our fear and control the anger in our response, is absolutely crucial for our survival.  In Part III, I will discuss Stress Management during the encounter and dealing with the public, law enforcement and the court system.