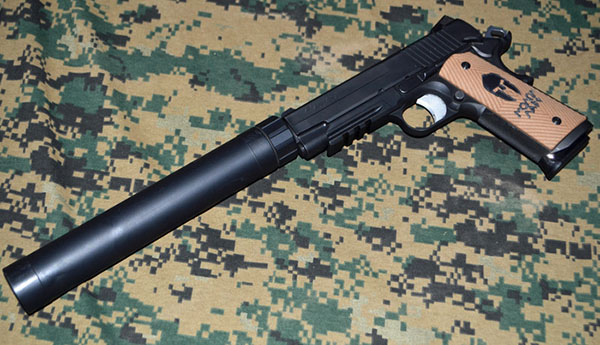 One of the most misunderstood and controversial accessories for shooting enthusiasts in the United States are sound suppressors, more popularly known as silencers. Throughout most of the rest of the world they are as regulated as an automobile muffler and can be bought over the counter with no paperwork or are subject to very little regulation. However, in the United States they are considered an NFA (National Firearms Act) weapon and subject to the same taxes, paperwork and regulation as owning a machine gun, sawed off shotgun or short barreled rifle.

The reason for this has to do with the first Federal attempt at gun control in the form of the previously mentioned NFA. The National Firearms Act was passed in 1934 as a response to sensationalized crimes committed by gangsters and Depression-era bank robbers who wrongfully used firearms and sound suppressors in the commission of their crimes. Such firearms came under the control of the federal government and required the purchaser to submit fingerprints, photographs, sign-off by a county sheriff, a tax of $200 and an extensive background check.

As a result, most of these items were put out of the realm of affordability for the average US citizen and in some cases an unfair stigma was attached to them, which persists to this day. This had the detrimental side effect of development in these areas languishing and remaining stagnant until the latter half of the 20th century.

Although often depicted as the tools of assassins, spies and mob hit men; sound suppressors offer a number of benefits to the shooter apart from the obvious reduction in noise. Sound suppressors can aid in the cycling of semi-automatic pistols and act as the ultimate compensator when it comes to reducing recoil.

Due to misinformation about sound suppressors generated as a result of the NFA and the Gun Control Act (GCA) of 1968, they by and large remained out of the realm of the average shooter’s experience. The 1994 Federal Assault Weapon Ban further compounded this by making threaded barrels a banned criterion in firearms construction.

Threaded barrels are the primary method for attaching a sound suppressor to a firearm, whether it is a “thread on can” or a “Direct Connect” allowing the sound suppressor to be attached over an existing muzzle device such as a muzzle brake, compensator or flash suppressor (the last of which was also banned under that legislation).

The sun setting of the Federal Assault Weapon Ban and the development of sound suppressor technology for use by the military in the wars in Iraq and Afghanistan helped fuel the current boom in demand for sound suppressors.

There are three basic categories of sound suppressors: rim fire, pistol and rifle. Technically there are sound suppressors made for shotguns, but only one offered by a major US manufacturer (Silencerco’s Salvo) and the author has yet to test that version first hand.

These sound suppressors are meant for use on rifles and pistols chambered in 22 LR, although some manufacturers produce versions that will work on other rim fire calibers such as 17 HMR and 22 Magnum as well as on certain center fire pistol rounds like FN’s 5.7mm. As a rule, rim fire sound suppressors are the least expensive suppressors ranging in price from $199 to $500, depending on the manufacturer and options. Due to the small size of rim fire ammunition, these silencers can get by with a smaller tube diameter. This is considered a plus as in many cases they will not block the sights on the firearm and occlude the sight picture.

The major downside to rim fire suppressors is that they tend to get very dirty as a result of the accumulation of unburnt powder, carbon and lead deposits from non-jacketed or unplated bullets.

When looking for a quality rim fire suppressor, ease of maintenance is essential. A silencer that can be disassembled for cleaning is more desirable than a completely sealed unit that needs to go back to the manufacturer for service. An ideal entry level suppressor is the Gemtech Outback IID, as it can be taken apart by a spanner wrench or a pair of needle nose pliers. 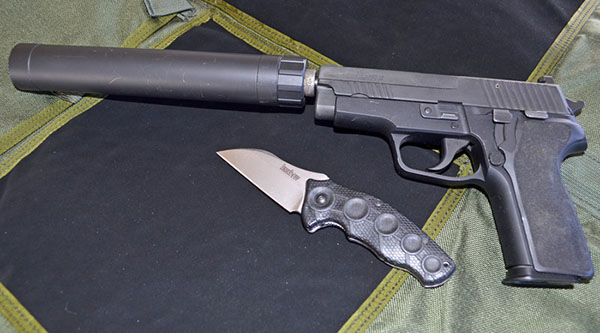 Inside the Outback are six titanium baffles that can be easily cleaned, but care must be taken to replace them in the proper sequence. The ultimate in user maintenance may be the GM-22 which utilizes a monocore method of suppression in which the baffles are removed as a single one-piece unit for cleaning and maintenance.

Rim fire sound suppressors lower the sound of 22 LR ammunition to hearing safe levels by trapping the gasses by the fired round within the suppressor body. Additionally, some rim fire silencers make certain 22 LR semiautomatic firearms more reliable by redirecting the gases rearward.

Handgun sound suppressors are those intended for use on the three most popular semi-automatic pistol calibers: 9mm, 40 S&W and 45 ACP. Some of these silencers are safe to use on a submachine gun, but not all of them are. It is important for the buyer to check with the manufacturer prior to installing a pistol suppressor on a submachine gun.

When using a pistol suppressor, it is important for the shooter to use subsonic ammunition, to reduce the risk of damaging the silencer. Subsonic ammunition travels slower than the speed of sound. This speed can vary depending on ambient temperature, altitude, and humidity, but is generally regarded as less than 1050 feet per second.

In sound suppressors designed for use with rifles, this requirement can vary depending upon the suppressor in question. An interesting anomaly is the 300 AAC BLACKOUT round, as the subsonic loading of this caliber may be fired through certain pistol suppressors. Many sound suppressors intended for pistols can be run wet. This is accomplished by pouring a teaspoon of water into the rear of the silencer prior to attachment.

As a round is fired and the resulting hot gasses are released into the sound suppressor, the inside of the silencer heats up and transfers this heat outward. The use of water acts like a coolant and creates less combustion and therefore less sound. As the water converts to vapor after 30 or so rounds, the sound suppressor will heat up again and becomes less quiet. More important than the conversion of the water to vapor through the cooling process, the process also uses most of the energy generated by the hot gasses, which results in less sound. This difference can be between 3 and 15 decibels.

The downside of the pistol suppressor is its diameter. A larger diameter bullet means a larger diameter tube for the sound suppressor. In the case of most handguns, this means the majority of factory sights will be obscured unless the shooter installs taller “suppressor sights” on the handgun or uses a mounted optic which sits higher than the silencer tube.

Some manufacturers have tackled this hurdle by making “eccentric” sound suppressors, such as Advanced Armament’s Mirage or Silencerco’s Osprey. These sound suppressors have the baffles mounted closer to the outer edge of the suppressor body as opposed to the center.

The other problematic area with regard to suppressing a pistol lies with those that utilize the Browning recoil mechanism. A fixed suppressor will not allow these types of firearms to function correctly due to the weight of the suppressor, so a spring loaded Nielsen device which acts like a booster or a piston is needed.

In many cases these devices allow for an interchangeable piston such as the Gem-tech Multi Mount or the ASAP system used by Advanced Armament’s Evolution and Ti-Rant models so that the shooter can also change out the female threaded section of the suppressor for mounting on pistols with different barrel thread patterns and in some cases different calibers. 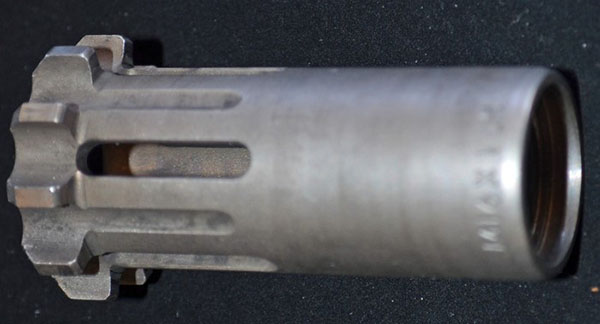 As a rule, center fire rifles are considerably louder than handguns and can benefit more from the use of a sound suppressor. Rifles chambered in pistol calibers such as 9mm or 45 ACP still use pistol or submachine gun suppressors, without the aforementioned Nielsen Device as those barrels are fixed and do not need the additional boost. When speaking of rifle suppressors we are generally speaking of those intended for use on 5.56mm through 50 BMG. These sound suppressors vary with caliber and each has its own set of rules.

In the case of AR-15 style rifles, the shooter has to deal with a supersonic round, which is intended for a certain barrel length to burn off the powder of a fired round. For this reason, most sound suppressors for this caliber are intended to work with a minimum barrel length of 10.5”. Shorter barrels will have a detrimental effect on the cycling of the rifle’s action with a suppressor in place as gas from the fired round is needed to complete the firing sequence and to safely chamber the next round. 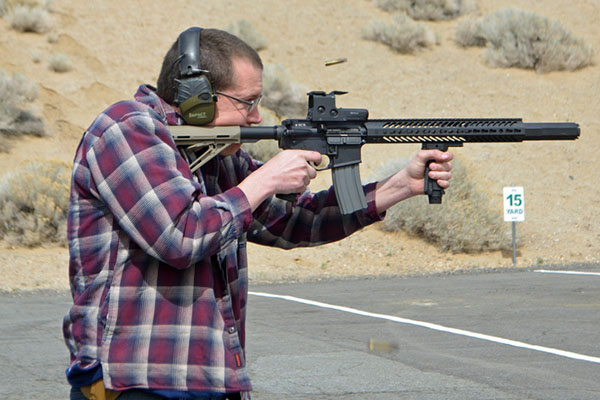 Rifles chambered in 7.62 NATO have another set of problems in addition to the sonic boom generated by the fired round. Some shooters attempt to avert this by using subsonic rifle ammunition, but care must be taken in this regard as the lands and grooves of the rifle’s barrel may not correctly stabilize the heavier and longer bullet while in flight. This can lead to the round veering off course and striking the endcap or one of the baffles found in the suppressor.

Another hazard of firing a suppressed semiautomatic rifle lies in the gas system as we touched upon in the earlier paragraph with regard to AR-15 rifles. The gases in sound suppressors tend to be directed rearward. This excessive gas often finds itself directly in the shooter’s face.

In the case of the AR-15, this is remedied by using what is known as a “gas busting charging handle” which prevents the gas from leaving the rear of the receiver. Other rifles such as the M1A require an adjustable gas plug such as the one’s made by Schuster to reduce the flow of rearward gas pressure or the FN FAL which has an adjustable gas system that can be completely turned off.

An exception to this is found in the sound suppressors made by OSS. These unique suppressors are designed to contain the gases in a separate chamber within the suppressor. From this perspective, they succeed greatly to the detriment of excessive heat by the suppressor and not very effective suppression of noise. 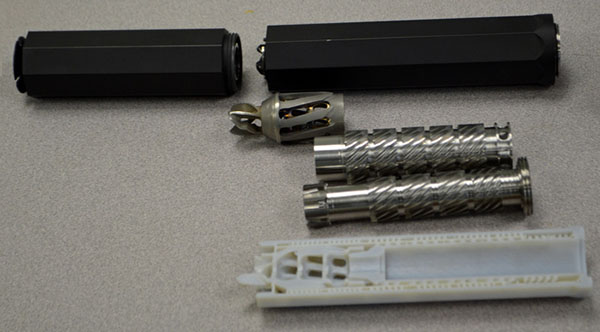 Very few rifle suppressors are made to be run wet as the pressures generated by a rifle cartridge are much greater than those of a pistol. The use of water as a coolant in these sound suppressors can have dangerous results to the shooter and any bystanders.

Preparing a firearm for a sound suppressor 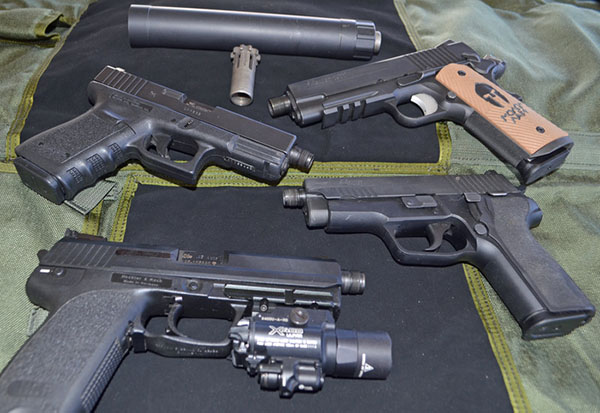 Suppressors may seem like a “plug and play” type of accessory and in many cases this is true, particularly in the realm of thread-on suppressors and factory threaded barrels. However there are some pitfalls to watch for. Having a non-threaded barrel threaded for use with a sound suppressor is one area where the services of a professional is required. It may be tempting to pick up a ½ X 28 Die to thread the barrel of a 22 or 5.56mm rifle, but in order to avoid a baffle strike, the threads must be concentric to the bore. Numerous gunsmiths provide this service including TROS USA, Gem-Tech and Accurate Ordnance. 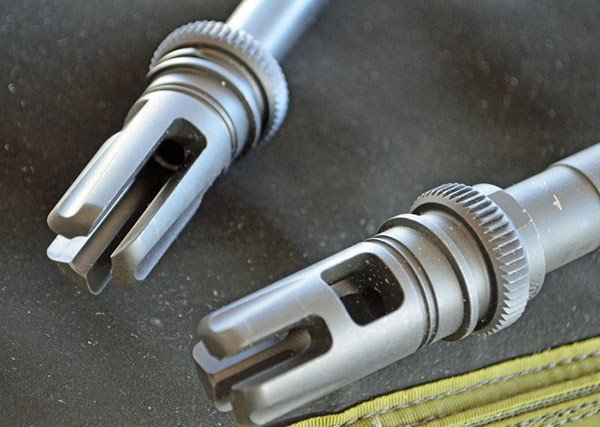 Due to the pressures of high powered rifle rounds, most rifle suppressors are not user-serviceable, A baffle or endcap strike means sending the suppressor back for service. In some cases it can mean the destruction of the suppressor and a new tax stamp on a Form 4 to replace it.

More than just a glorified range toy, an effective sound suppressor confers many benefits and is probably the most practical and useful of all the NFA classified weapons. While many feel that they should be unregulated, at this point in time it is the one accessory that every serious shooter should consider despite the expense, paperwork and approval time lines.