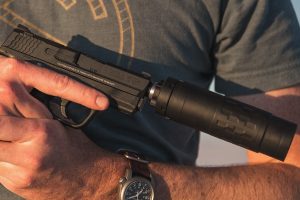 Why do you need a silencer? Even if you’re not a secret operative working undercover, you may still benefit from it. For example, for keeping a lower profile when hunting or for target practice without bulky ear protection.

The main material in a silencer or suppressor is not the metal it’s made of but the air inside. As propellant fumes escape the barrel under high pressure, they create a small explosion that we instantly recognize as gunshot. A silencer’s expansion chambers contain the cloud’s movement and force it to pass multiple narrow passages before it hits open air. By the time the exhaust is in the open, its speed and pressure are too low to produce a loud enough sound. In some cases, the operation of weapon’s moving parts and the bullet’s sonic boom (when supersonic rounds are used) is louder than the actual gunshot.

Of course, not all rounds are equal. The greater the power, the bigger the volume of gas and the higher the pressure. This requires a more advanced and, typically, larger suppressor.

This is where the M in the Omega 36M comes into play. The modular design lets you combine front and rear cores to receive the right option for any caliber between .22 LR and .338 Lapua Magnum, and up to 9mm with handguns. This reduces the combined size and weight of the silencers you need for various firearms. That in turn means further flexibility in firearm choice.

You can shop for new and upcoming silencer models at gritrsports.com