Skip to content
blog.GritrSports.com > How to Guides > Shotgun Ammo Buyers Guide
How to Guides 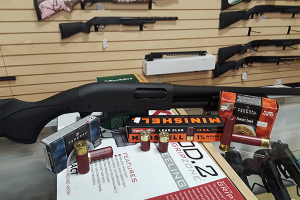 The shotgun is the most recognizable firearm on the market with that signature “Ku-Chak” sound. Better yet, there are an impressive variety of shotgun rounds available to load into your shotgun. It’s an incredibly reliable and adaptable weapon. The shotgun can adapt to any circumstances and any environment, with specific loads tailored for your situation. The shotgun can be used for hunting, self-defense, anti-personnel and anti-material. Anti-personnel and anti-material typically means I can use the buttstock of my shotgun to physically take down targets or break windows and doors.

Shotgun ammunition is measured in gauge rather than in caliber, and they come in a variety of sizes and power. The smaller the number, the larger the shell. So a 20 gauge is going to be smaller than the 12 gauge. Bigger shells mean more power but also more recoil and stress on your gun. Shotgun shells come in different lengths as well. The way you measure the length of a shell is to measure the length of the spent hull. With shell length, you use inches to measure it instead of millimeters. For example, the most common shell sizes are 2 ¾ inches, 3 inches, and 3 ½ inches. The 12 gauge shotgun will generally be able to handle these shell lengths.

Birdshot is the smallest type of shotgun pellets. It is typically used by hunters who want to shoot birds or other flying wildlife. Inside a birdshot shell are small steel or lead spheres that scatter outward once fired. The more metal spheres, or pellets, that get packed into a shell, the more the pellets will scatter around the target area. The reason why this type of ammunition works best for shooting birds is because it is easier to hit them with it. Think of little BB’s that spread out a decent amount. It’s also good for snakes, rodents, and other small critters.

As far as self-defense is concerned, I do not consider birdshot to be effective, and this opinion is shared by most people. Although birdshot can be powerful enough to take down small animals, there’s not sufficient power for little BB’s to penetrate deep enough into a target’s vital organs. If a target is charging you with a deadly weapon, birdshot might be able to slow them down at best. However, it is perfect for bird hunting, clay shooting, and target practicing.

Buckshot is generally recommended for home defense due to the stopping power it offers. 00 buckshot sends nine large caliber pellets flying at over 1,300 feet per second, and it is powerful enough to go through car doors, metal panels and whatever else you may be shooting. Buckshot is usually used for deer and other large animals, hence the name. Like all types of shot, a buckshot pattern grows in size as the range increases. Buckshot is a type of shotgun ammo that uses medium-sized to large-sized pellets of .24” in diameter or larger. Most loads contain roughly 8-9 pellets which are much larger than the birdshot BB’s.

The 00 buck is probably the most common shotgun shell you’re going to find. The larger the buckshot, the greater the stopping power, however, large buckshot carries a risk of over-penetration. A real problem for the homeowner who is defending his home is over-penetration. Rounds fired inside a house may break through walls and into other rooms that could be occupied by family members or even next-door neighbors. For this reason it may not always be a practical home defense solution. Don’t forget, increased power means more recoil. The buckshot is not recommended for hunting birds or clay shooting, but it’s great for self-defense and taking down large game.

A slug is actually a word that describes a shotgun bullet. A slug is one solid projectile (usually around one ounce). The slug replaces smaller projectiles, such as birdshot or buckshot in a shotshell. Just like buckshot, there are many different types of shotgun slugs available on the market. The big advantage of using a slug is that it has a much longer effective range (at least 75-100 yards). However, it does have a higher recoil. Also since it’s a single projectile, your aim must be on point.

Slug shells for self-defense are sometimes thought as overkill. You have one projectile going in one direction. Whether or not a slug hits the intended target, it can travel far and go through a lot of stuff before it stops. Unless you’re in a situation where penetration is important or you have a large property, using slugs is not a prudent option. It’s good to keep some slug shells close by, but I wouldn’t use it as a first choice. The neat thing about slugs is that there are so many different variations of them based on materials and design. Each type of slug causes a different amount of damage and has different flight characteristics. You may need to test several different types and brands to find the best for you.

Have you ever wondered what would happen if you added a little extra kick to your shotgun? Exotic ammunition is not your standard shotgun ammo. If you want to add some excitement to your shotgun, then consider giving a few of these unconventional rounds a try. There are a lot of different types of exotic shotgun ammo. For most of these rounds, you’ll need a safe area to shoot and proper hearing protection. Some you’ve probably already seen and some you may not know existed.

The Flash Thunder Grenade round doesn’t fire a projectile, but it does produce an intense flash of light with a loud bang sound that will disorient anyone. To sum up the Flash Thunder Grenade round made from Firequest, it’s pretty much a concussion grenade coming out from your barrel of your shotgun. It is highly effective to use as a stun or diversion in any situation. If you’re not wearing the proper ear protection, this can definitely do some serious hearing damaging. This is a round I recommend not using in small areas.

The Dragon’s Breath is another creation from Firequest. Have you ever seen a 100+ft. flame shot out of a 12 gauge? Every shell gives you a 4,000 Fahrenheit magnesium flame that extends anywhere from 100-300ft. outward. This round really lets you push your shotgun to the limits. Dragon’s Breath may be the most dangerous round with a fairly high risk of starting a grass fire. The downfall to this exotic shell is you cannot fire it anywhere near trees or dry grass. Because magnesium is an ingredient in this payload, you will need to clean your gun after you use this round. The magnesium won’t scratch or melt your barrel, but it will foul it. For instance one Fireball will foul your barrel as much as 25 skeet loads. It’s a cool shell to experiment with in a safe area but that’s about it.

The Flechette round carries over a dozen 1 inch steel dart shaped shoots from your 12 gauge. Flechette is the French word for “little arrow.” The concept is nothing new. During the Vietnam War, this round was used in areas filled with thick bushes. These were originally designed to penetrate jungle foliage that enemies may be hiding behind. In other words, the ammo is effective at penetrating intruders and any perceived cover. While nasty looking, they can be very inaccurate. I wouldn’t recommend using this round for home defense because the Flechette lacks accuracy. This is a round that you won’t find practical use for but it is fun to shoot targets with.

The Bolo round is a more common exotic shotgun ammo type. It’s essentially two relatively large ball bearings (0.5” each) connected by a thin metal wire. The Bolo round may not look much but it can do a substantial amount of damage to anything it hits. The Ball and Chain can impact an area of approximately at 15 feet. The Bolo round’s effectiveness, however, is questioned by many shooters. The design’s alleged damage potential has led it to being banned in certain states, but some gun owners doubt the Bolo round’s accuracy and power. Again, it’ll be fun to play with but it doesn’t have a real practical use to it.

The Fiocchi Rubber buckshot is commonly used by police departments for riot control. These non-lethal rounds are similar to buckshot except that they have a rubber bearings in place of steel ones. Don’t let the name fool you, just because rubber balls are non-lethal does not mean they won’t hurt. It has even been recommended not to fire at close range because there has been cases of head trauma caused by the rubber rounds. In terms of functionality, rubber bullets have a more practical use compared to some of the other exotic shotgun shells on the market. They can be used in a home defense situation without resorting to deadly force. These bruise-makers are available in numerous calibers, although they are most common in 12 gauge shells.

Versatility in shotgun shells is a great strength, but you must choose your loads carefully for your environment. A final aspect I enjoy with my shotgun is the different shells I can load at one time. I like to make a pattern with the shells I’m loading into my Mossberg 590. This means as long as it says 12 gauge, I can load any shell I want into the shotgun. While it will ultimately come down to personal preference, a shotgun is a formidable weapon for hunting, personal use, and self-defense. If you go the tactical shotgun route, remember that like every weapon you need to train with it to be effective. A shotgun is only as good as the shotgunner holding it.