Skip to content
blog.GritrSports.com > How to Guides > Self-Defense When Your Handgun Is Unavailable
How to Guides 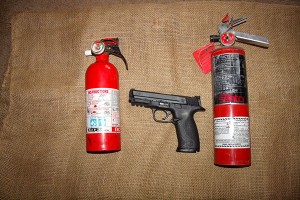 Can I rely upon my physical ability as a martial artist (which I’m not), or a track star (which I’m not), or  6’4”, 250 lbs. (which, as you can guess, I’m not)?  I’m 5’4”, 135 lbs., suffering from lower back issues and the onset of arthritis in both hands.  I’m the type that would always have a handgun with me no matter what.  I’m the type that if my handgun is in the shop, I’ll carry another handgun.  I’m the type that I don’t forget where my handgun is because I know that it’s the best and only self-defense implement for me.  So, I’m going to pretend my handgun is unavailable, to research and discuss the options available.  I may refer to women in this article, but the information is for men as well.

Surprisingly enough a very effective and readily available item would be a dry charge fire extinguisher.  If you are in your car or near your car when approached, you can use the fire extinguisher to disrupt the situation by “sand blasting” the perpetrator with it and then clobbering him/her with the can prior to either grabbing his/her handgun or running away.  Not all of us carry fire extinguishers accessible to the driver, but we do carry them somewhere in our vehicle. Perhaps by observing the event as it unfolds and pre-planning we might be able to get our hands on it for this exact purpose.

We’ve all practiced with fire extinguishers at some time in our life so we’re familiar with what to do.  We all know that Fire Extinguishers are rechargeable and if you have it recharged or replaced on a regular basis, it will work when you need it.  Yes, it’s initially purchased for a fire, but can be used in personal protection as well.  Many of you have fire extinguishers in your homes, particularly in the kitchen.  I have one also in the master bedroom just in case.  Even though some fire extinguishers are quite small, it may be impossible to conceal it on your person, so we need to look at some other options as well. 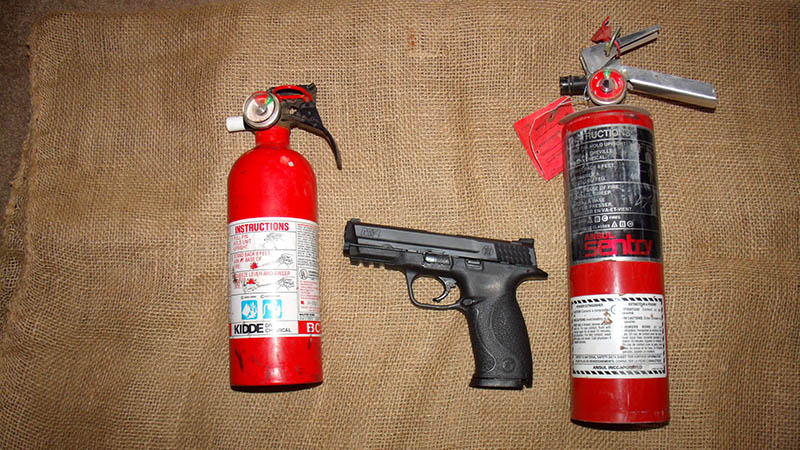 Most men would tell you that if you don’t have a handgun, carry a knife.  Personally, I fear knives for this purpose.  And, unless your experienced in hand to hand knife fights, a knife cut is bound to occur.  Some of them can be very painful and deadly.  Most men carry a knife.  It seems to be a necessary piece of hardware for them and granted it is handy when they need to cut something.  However, since a knife is easy to wield, easy to conceal, how do you safely avoid a knife?  It is difficult to detect on someone’s body until it’s pointed at your throat.  I refuse to allow the perpetrator to get close enough to me to use his/her knife.  Likewise, if I have a knife in my hand, I must get close to the perpetrator for it to be used and effective.  I’m not competent enough with it to do this. 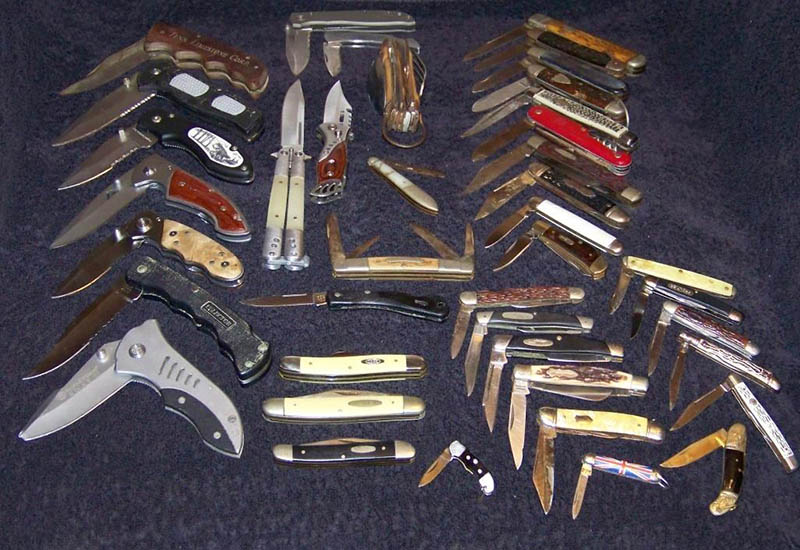 We’ve all heard about ECD (Electronic Control Devices) or CEW (Conductive Electricity Weapon) know by many under the brand name Taser, or Sabre.  They are smaller than a fire extinguisher and can be easily concealed on a person or in a pocket or purse.  They come in a variety of potency and colors and are easily purchased and readily available in some states.  The problem is that you must get close to the perpetrator to activate the item.  Also, it has been proven statistically that the Taser is not effective on everyone.  Perpetrators heavily fueled with adrenaline and drugs can rip out the Taser barbs from their skin and/or clothing if penetrated.  If this happens to you, what is your backup?  I’ve never owned a Taser and am not the least bit interested in one. 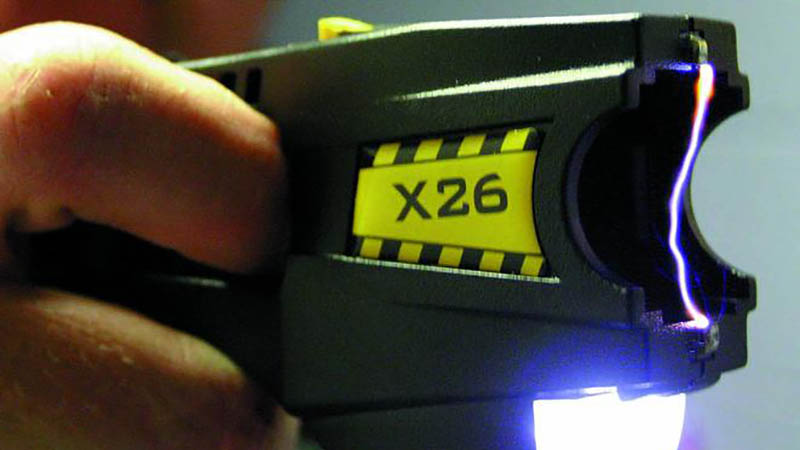 A certain percentage of the population including those resistant to chemicals, the mentally ill and alcoholics are not effected by Pepper Spray.  If the Pepper Spray doesn’t even function, due to out of date chemicals or hasn’t been recharged, then you’re “up a creek” if that is all you’re relying on.  And once more, you must get within a certain distance to the perpetrator and effectively concentrate the spray.  An individual I’m acquainted with whom is a Pepper Spray Instructor, had to be sprayed three times before the capsicum chemical took effect.  And when it did finally take effect, it was minor irritation compared to what should have occurred.  Then there’s the issue of how do you practice with your Taser or Pepper Spray?  Who’s going to stand still long enough for you to practice on them?  To recharge either may require that you purchase a new one, so there is added expense.  I’ve talked to some ladies that carry both Taser and Pepper Spray and they’ve mentioned that they’ve never practiced with them.  They have no idea how it will function or whether it will function.  I personally have only purchased one Pepper Spray and then conveniently lost it.  That was my sign that it was not meant to be. 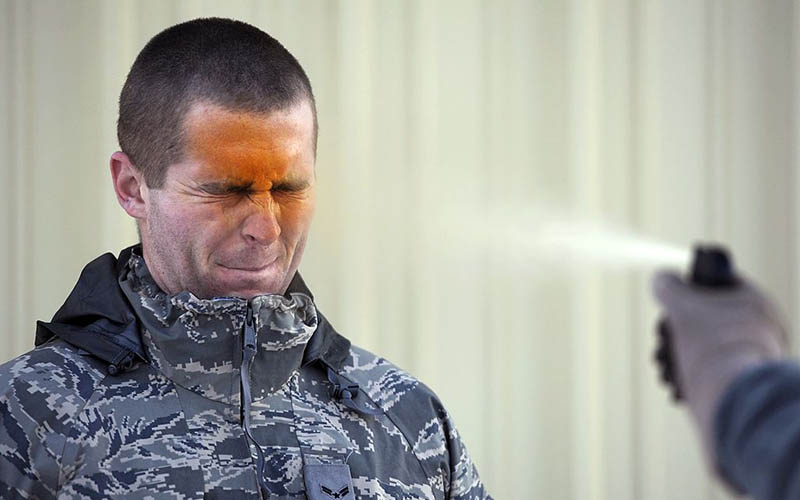 I’ve heard of the “Tiger Lady” advertised on the radio.  I looked it up on the internet.  Well, you certainly look fierce with one in your hand, and if you’re aggressive enough to use your fingernails or your car keys against the perpetrator, then maybe this is an option for you. It will require that you get close enough to the perpetrator to be effective by scratching his/her skin.  However, unless you are willing to be proactive rather than reactive in a combat situation, you may be overpowered before you can take a swipe.  When you take a swipe, you collect a DNA sample for the police.  So, if you die during the altercation at least the police have a sample to compare with their database.  If you’re hesitant or squeamish about breaking their skin and drawing blood there’s always the brass knuckles, which may or may not be legal in your state.  Once more you need to contact the perpetrator and unless you’re the Hulk, I’d advise against it.

Some women carry personal alarms in the form of key fobs when they walk anywhere.  Granted the personal alarms can be ear piercing and perhaps present enough of a shock to the perpetrator that he/she will disengage their attack, but it may also just piss him/her off and intensify their anger and their resolve.  You best have a back-up system, such as a Tiger Lady, Taser or Pepper Spray as a secondary attack and use it in addition.  Granted that a sound may attract attention, but it is also widely accepted and statistically proven that car alarms are generally ignored and even shouts for help are ignored as well.  You’ve also heard about these intense lights, such as flashlights, that may be successful in disorienting the perpetrator while you escape his clutches.  The problem being that as soon as you move, so does the light and dependent upon his/her resolve you need to be a track star to escape in time.  Used alone the flashlight may have temporary effect, so an addition back-up system is necessary. 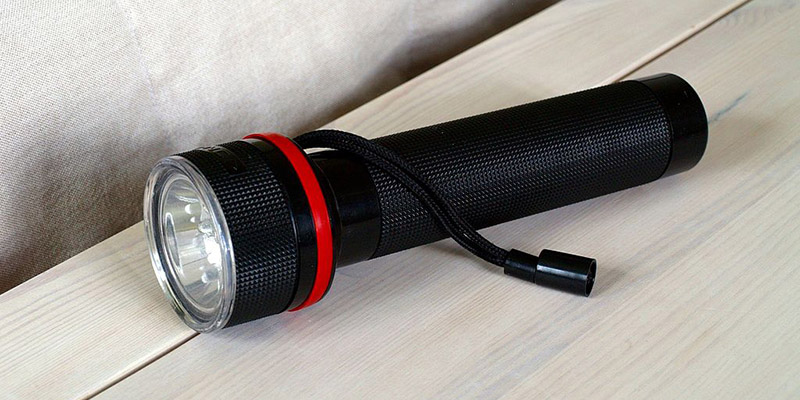 Perhaps you carry a cane.  If you keep control of it and learn how to use it as a weapon, it might become your best friend.  The cane can be used quite effectively as an overt defensive tool and due to its innocent appearance, it doesn’t draw attention.  In fact, rarely do you pay attention to someone with a cane so it becomes very transparent.  Just having one however, does not make you an expert in its usage as a defense tool.  Like these items mentioned, some training in its use should be obtained and practiced. 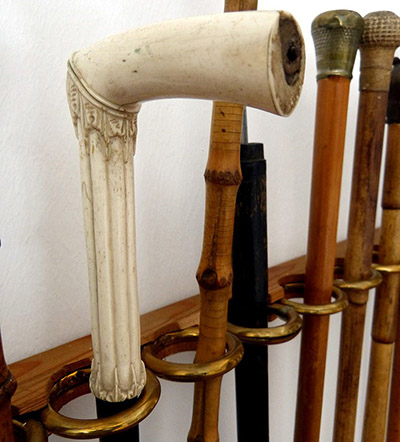 So, here’s my suggestion for you if you choose not to carry a handgun or find yourself without one due to circumstances beyond your control.  Look at what’s around you that could be used as a means of frightening someone away.  A vehicle whether moving forward or backward is a little hard to stop if you’re on the outside of it.  So, if you feel threatened, get to your vehicle, lock the doors, start the ignition, press the accelerator and leave.  That means running over the perpetrator if he/she fails or refuses to get out of the way.  Your sitting at your kitchen table when someone breaks in your home.  You’ve got a room full of knives, and frying pans at your disposal.  Sitting in your office when an employee threatens you with a gun or knife, your laptop, table lamp, even your desk can be used as a defensive weapon.

Remember that many of the items I’ve mentioned may not be legal in the state in which you live.  In that event, perhaps you’d better brush up on your observation skills.  Be proactive rather than reactive, on the offensive rather than the defensive.  Be aware of your surroundings and avoid suspicious situations and people.  Check out Jackie Chan movies which are great for showing you the possibilities.  It never ceases to amaze how everyday objects can be used to thwart aggression if you just pre-plan.

The real secret to “Self Defense When Your Handgun Is Unavailable” is to pay attention.