Skip to content
blog.GritrSports.com > How to Guides > The “Rise” Challenge for Women
How to Guides 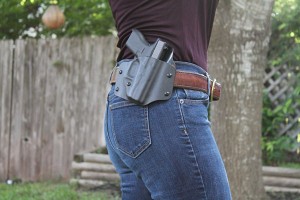 When you hear the word “rise” you think of the rise of the muzzle of your firearm.  This word also appears in the purchase of pants.  This is particularly important for women as the “rise” of their pants will determine IWB vs. OWB carry.

Most women that I train are of an age whereby very few consider Inside the Waist-Band or Outside the Waist-Band carry.  For many women, having anything restrictive around their middle is uncomfortable.  Sometimes their shape and clothing style will not permit it.  Many women don’t wear belts for IWB or OWB carry and if they do, women’s belts are thin and weak.  They’re made for fashion statements.  The belts allow holster slippage and break easily.  Men’s belts are thicker and heavier and much better for holster carry but women’s belt loops are not wide enough or strong enough to accommodate the men’s belt and the weight of the holster and pistol.  This then requires the purchase of a specially made belt for on-body carry.

For women who prefer IWB or OWB, they must consider the “rise” of the waistband of their pants prior to purchasing a holster.  The term “rise” refers to the position that a pair of pants sits on a body.  Dependent upon the style of pants and its rise, the woman’s choice will determine the ease or difficulty of carrying a pistol.

IWB and OWB methods for women are rarely designed with “rise” as a consideration.  Advertisements show slim bodies without an ounce of fat wearing low rise pants with a variety of pistols in various places.  The belief is that if you use their holster, you’ll also look like this.  Each body’s “rise” is different and what looks and feels great on one person, is an absolute disaster on another.  When wearing IWB on a low rise pants, you’ll find that the thickness of the pistol and holster will make the pants snug on the hips and may be uncomfortable.  It may force the grip to lie along the upper hip and push into the curve of the waist.  A size larger in pants may correct this situation.  When wearing OWB, the curve of the pelvis holds the holster at the proper angle away from the body for quicker access.  It may be more comfortable but less concealable.

For women who prefer high rise pants, this rise precludes many of them from comfortably using either IWB or OWB carry without some changes to their preferred sizes and styles.  Both holsters sit at the waist and push into the lower portion of the ribs.  The IWB method requires that you purchase a pant size larger for comfort otherwise you feel suffocated.  With the OWB method of carry on the high rise pants, the next larger size is not necessary but the hip pushes the pistol and holster into the rib cage because of the height at which the holster sits on the waistband.  Because the hip tilts the holster towards the waist, a spacer or wedge between the waist and the holster is necessary to push the grip outward for access.  If a wedge is not used, to access the pistol the woman must lean in the opposite direction to expose the grip.

Buying slacks and jeans a size larger means that the seat area on the slacks and jeans, will also be much larger.  Larger waist and seat may not be the desired fashion statement for a woman.  Sometimes this minor imposition will be enough to change the woman’s mind about carrying on-body.

Women purchase slacks and jeans based on a size (2, 4, 6, 8, …). Women’s pant measurements are based on proportionate waist to hip dimensions. Dependent upon the style of the clothing, the same size can vary in both the waist and hip measurements.  Therefore, it is almost impossible to buy a pair of pants for IWB or OWB carry without taking the holster and pistol with you when trying on the clothing.  The pistol is necessary because its weight may make elastic waistbands prohibitive.

Recently I acquired a woman’s IWB holster called “Hers” by N82 Tactical.  I can wear it without a belt as it uses a clip to the waistband.  I can easily remove it for the call of “mother nature” and it molds itself to the shape of the hip.  It consists of a holster body mounted on a leather, neoprene and suede backer.  The holster protects the body from all the pistol surfaces.

On my high rise jeans, the “Hers” holster was uncomfortable.  It was almost suffocating as the waistband was very tight.  I then put on a pant size larger and found that it was manageable, though not fashionable.  It made me look much heavier than I am.  I attached the “Hers” holster to my low rise jeans and found it also uncomfortable in my size.  In either size because the pants sit lower on the hip and subsequently the holster sits lower on the waistband, it was impossible to wear the “Hers” in the appendix position.  At the appendix position, when sitting my upper thigh pushed the holster upward and subsequently the pistol out of the holster.  In the hip position, the pressure on the hip bone was uncomfortable.  The behind the hipbone position was comfortable all day.  In driving, the seat belt did not interfere with this carry method.

I also tried a Safariland Polymer OWB belt holster with both styles of jeans and found it most comfortable behind the hip on the low rise as well.  On this holster model, its cant is adjustable to give access from a variety of positions.  I kept its cant in the straight-up position while trying it.  With the high rise pants, the holster did not have a wedge to push it outward from the body.  As such it pushed the grips into my ribs.  I could change the cant forward and backward to make the placement more comfortable.

Both holsters were designed for the Taurus G2 which I recently purchased.  I tried both holsters at the range while I wore my low rise pants.  I wanted to determine which method of carry allowed for quicker access and I felt the more comfortable the “rise,” the better the performance.  And I was correct in this assumption.  Both were equally comfortable but the Safariland OWB holster required less movement of clothing to access it.  Time-wise, drawing from the OWB holster was quicker.  I believe that with more practice my IWB draw would be as quick with some minor clothing adjustments.  I was impressed that the material used for the “Hers” holster kept the holster in place during the draw. Many times, IWB holsters follow the pistol as it is drawn.  And if women don’t wear belts, the holster is only secured by the pressure applied by the body and the waistband it’s hooked to.

In conclusion, I found that Inside the Waistband carry required a size larger in both “rise” of pants to be comfortable.  The Outside the Waistband carry did not require a change in size.  The low rise pants comfortably held the holster in an acceptable position, but on the high rise pants, the cant of the holster, both outward, forward and backward was required to keep the pistol out of the ribcage and ensure access.  I chose not to include mid-rise pants in this experiment, but I’m sure the conclusion would be very similar.

Women have figures whereby the “rise” of the waistband on their pants will determine the method and ultimate comfort of pistol carry. IWB vs. OWB carry is challenging.