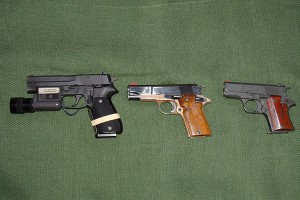 Long ago (well, not that long ago, 1970) and far away (in Boston, Mass. actually), I began a career as a Special Agent (Criminal Investigator) for U.S. Customs. I was already a gun owner, competitive shooter, and CCW holder. In those days when the people of Massachusetts were more free, non-residents could get a monthly CCW for $2 a month, starting at age 18 !  I had been carrying a gun for 5 years before I hired on.

The gun choices in those days were simple – uniformed police officers carried a 4” 6 shot .38 Special or .357 Magnum revolver by Colt or Smith & Wesson. Those who carried concealed carried a 2” small frame .38 Special revolver by the same two makers. Ammo choice was even easier – 158 grain round nose lead in .38, 158g lead semi-wadcutters in .357 Magnum. The ”truth” of the day was that, while the military muddled along with semi-automatic .45’s and ball ammo, for everyone else, “Semi-automatics jam all the time!” And, “Semi-automatics are inaccurate – hitting a washtub at 25 yards was an accident!” No one knows where this came from, but it was the accepted truth, and to suggest otherwise was heresy!

Once I was on the job, I too carried my 2” Smith & Wesson Chief’s Special Model 60, and 6 extra rounds in the aptly named “dump pouch.” Dump it did, usually in the worse places at the worse times, like a donut shop filled with customers at 5AM, enroute to serve a search warrant. By the way, I was already considered a gun guy, because I carried those extra rounds all the time, not just for raids! I quickly learned that the 158g .38 load was know as the “STOP, or I’ll wrinkle your suit!” load, due to it’s lack of effectiveness.

A fellow called Lee Juras shocked the ammo world when he made his Super Vel ammo with lighter, 110 grain bullets that were Hollow Points! Why, those were inhumane and violated the Hague Convention (which the U.S. had not signed, and only applies to use by the military). Oh, the horror!! Guns would wear out in days, if you fired so much as one box of that ammo through them! The steel frames would stretch, the cylinders would fall out, and if you shot someone, you would be in big trouble!

Well, as you know, none of that happened. In fact, the Treasury Department and Winchester developed the Q4070 load – the very first +P+ load. The specs were for a 110 grain bullet at 1,000 feet per second, out of a 2” barrel!

For the record, I still have my original M60, which has fired in excess of 10,000 rounds of that ammo, and still shoots accurately – out to 100 yards on demand!

Over the years, we made the upgrade to 2.5” Model 19 Smith & Wesson revolvers, still using the Q4070 load. Qualifications moved from slow, timed, and rapid fire at bullseye round targets to a PPC type course on human shaped targets, and the Q4070 developed a record of actually stopping outlaws trying to kill officers.

Being a gun guy, I acquired a 1911 or two (or five) along the way, and started to shoot them. Golly fellows, they were not unreliable when lubed and fed good ammo, even handloads! And they were accurate enough, right out of the box, for defensive use, after you changed the sights and had a trigger job done

Having been made a Firearms Instructor, I started to agitate for permission to carry a semi-auto – a 1911, in fact. By this time I had transferred to San Diego, where I started to compete in “Combat Matches,” which evolved into IPSC matches (this may have been the start of political correctness, as “combat” became “practical”). In any event, I did well with my personal M19, but even better with a 1911!

In addition to my personal evidence, science came to our aid. It started with reports comparing results with semi-autos vs. revolvers, where the semi-autos always were easier to shoot, resulted in high qualification scores, and, with the new hollow point ammunition, were as effective per round as our JHP revolver rounds. The breakthrough came when the Illinois State Police issued Smith & Wesson M39 9mm pistols to all their officers. Their stats justified the change (even though everyone had to carry the pistol in a cross draw full flap holster on the left side – even those who were left handed!)

Eventually, my voice (and others) were heard, and we received permission to carry semi-autos. I remember the day well!  I was on the phone with an agent in another office discussing an investigation, when one of the guys handed me the new firearms policy, a policy that I helped to develop! As I leafed through it and saw that we could carry semi-autos, I told the other agent I would call him back. I used my lunch hour to drive home, get my STAR PD .45 out of the safe, load it with some JHP .45 rounds, and go back to work, and back to that phone call!

U.S. Customs eventually issued S&W M6906 9mm pistols, then allowed us to carry personal pistols if they were double action for the first shot (I used my SIG 220 .45), and just after I retired, they issued Glocks, mostly in 9mm.

Over my 27 year career, which included 9 years as the lead firearms instructor at our academy, I trained over 5,000 officers. About 20% with revolvers, the rest with semi-automatics. So, I have carried both types, and trained folks with both types of guns

Having lived through the revolver era and transitioned my agency to semi-autos, I have experienced both. So, which is better for personal protection, a semi-auto or a revolver?

Let me tell you why, from my background, training, and experience.

When I carried a revolver, did I ever feel undergunned? No! But those were different times. In the 1970’s, outlaws did not want to shoot it out with us “Feds.” We had a reputation that “resistance was futile,” and to get in a shootout with us was to almost certainly result in their death, or life in prison without parole. “Don’t shoot, T-man” was a common response from those we arrested. (T-man was Treasury Man – it was a long time ago.)

Today, many seem to have no morals or ethics and are willing to shoot at any officer, including Federal Agents. Many have been shot before, and expect to survive. Or, they actually think that life is like a video game, where they can call a bullet back, or click on an icon and bring people back to life.

Plus, the problem has changed. Most of those I arrested were, at most, a group of 4 or 5, easily enough to be handled by 2 or 3 officers. Illegal aliens were exceptions on two counts – friends of mine in the Border Patrol arrested groups of up to 100, with just 1 backup officer. But those aliens were not drug or person smugglers, and they knew they would not be mistreated, and quickly returned to Mexico where they could try again (and again and again). They respected the Border Patrol Agents, and rarely resisted.

Today, we must realize the role of both domestic gangs and the potential for a terrorist incident with multiple outlaws. A few may have body armor, or my be ’drug enhanced’ to the point where they do not feel pain. In either case, more hits, even with today’s more effective ammo, may be required to solve the problem.

Of course one solution is to carry speed loaders and/or more than one revolver. I know one individual who carries, not one, not two, but three five shot revolvers on his person at all times – plus reload ammo. His reasoning is “one for his strong side, one for his weak side, and one that can be reached from either side”. Is he wrong? NOPE! He has accommodated his manner of dress and lifestyle to his choice. And he trains regularly.

Revolvers have more bulk than semi-autos, and they can be more difficult to conceal. But again, it’s a matter of how you choose to accommodate your choices, both in clothing and lifestyle. Don’t expect to conceal 2 revolvers on your person in a tee shirt and shorts – but I am sure there are some who can – and do.

I prefer semi-automatic pistols, for the usual reasons of ammunition capacity and lack of bulk. Although I got my Distinguished Pistol shooter medals with revolvers, I shoot semi-autos better/faster. But the truth is IT DOES NOT MATTER WHICH YOU CHOOSE!

I have been studying “interpersonal conflict management” for 50 years, and in that time I cannot recall a situation where a private individual needed to reload either a revolver or a semi-auto. Some chose to reload, but the issue was already decided. I’m confident that someplace, at some time, someone needed to reload, but in my constant surveillance of the issue, it has never come to my attention. And this does not mean you should not carry spare ammo.

Law Enforcement is a different matter, as we were expected to run toward the sound of gunfire, not away from it. Many police officers have needed to reload, as they intentionally confronted the evil-doers.

The only thing that matters in choosing a handgun is: Which style is more efficient for you to make fast hits on target. It does not matter which I, or your instructor, your best friend, or some “gun guru” on the internet prefers. If you can make hits faster with a revolver, by all means, carry a revolver. If a semi-auto allows you to maximize your speed and accuracy (in that order), choose a semi-auto.

No matter what your choice, get real training, and practice. With all the noise about terrorist plots and mass murders, the reality is:

The odds of you ever getting into a shooting situation is small – never zero, but small;

The odds of you being present at a terrorist attack or mass murder are even smaller – but still never zero.

So, carry what YOU like, but train and practice – you never know when it will be your day!