Skip to content
blog.GritrSports.com > Conversations > Shooting Gets A Bum-Wrap At The Olympics!
Conversations 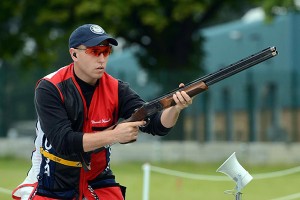 Little is known of the shooting events at the Olympics. Although they require tremendous stamina and discipline, they are given a ‘Bum-Wrap’ by the media specifically, and society in general.  The rifle, pistol and shotgun are demonized and their involvement in the most prestigious event in the world, is hushed.

Why has this occurred and why is it still occurring?  Perhaps few know the historical significance of the shooting events at the Olympics. The use of the pistol, rifle and shotgun have a long and illustrious world history as having evolved from military precision and the need to be ready to fight whatever enemy came forth, and in whatever fashion was required.  Most of the competitors were members of the military and would not only train to defend the country but also train as a shooting unit to compete.  Such is shown in this 1920 photo of an Olympic U.S. Army Shooting Team.

The Pentathlon originally represented the skills required for a military dispatch courier to transmit documents from the front lines to headquarters.  This required the skills of running, swimming, cross-country horsemanship and pistol marksmanship.  General George Patton participated in the 1912 Olympics in Sweden in the Pentathlon.  In Shooting he finished 21st, in Fencing he was 4th, in Cross-Country Riding he was 6th, in Swimming he was 7th, and in 4000 meter Running he was 3rd.  It was the first for the modern Pentathlon.

Some of the early shooting events may have offended some people, but nonetheless they are part of history and represented hunting and even early personal protection skills.  The 1900 Olympics included the shooting of live birds.  This was the first and only time in Olympic history when animals were killed on purpose.  The Dueling Pistol event was held in 1906 (at the Intercalated Games – not officially recognized by the IOC) and 1912.  Competitors shot at mannequins dressed in frock coats.  The bullseye was on the dummy’s throat.  The distances were at 20 and 30 meters.  From 1908 to 1948, Olympians competed in Running Deer events, a hunting-inspired competition.  Moving deer silhouettes were shot from 100 meters, scoring points on circles placed in the deer’s vitals.

The modern shooting events at the Olympics have moved away from the exclusively military participation.  Men and women from all walks of life and of all ages now participate and master the shooting skills necessary to compete at international level.  Still they are barely recognized by the world body as an appropriate sport to be applauded. Controversial because of the horrific crimes committed around the world utilizing a firearm, the world views the instrument as an unnecessary evil.  The politicizing of the inanimate object denies its’ importance in the world and the skill, discipline and talent required of the athlete in its perfection to the Olympic level.

In the 1964 and 1972 Olympics Lt. Colonel Lones Wigger won two Gold Medals in 50-meter rifle.  Margaret Murdock, a former U.S. Army Major and military rifle shooter, won a Silver Medal at the 1976 Olympics.  She was the first woman to win a medal in shooting.

At the 2012 London Summer Olympics, Olympian Kim Rhode won three Gold Medals in Trap.  She became the first shotgun shooter in the history of the sport to compete at the Olympics in three separate disciplines. Kim Rhode will be attending her sixth Olympics in Rio this summer.  If she succeeds in claiming a medal in Rio, she will be the first American ever to win Olympic medals in six consecutive Olympic Games in an individual sport.  Swimmer Michael Phelps has climbed the podium at only three.

Since 1896, the U.S. Shooting Team has won 103 medals in Olympic competition, more than any other country.  Shooting has been featured in every Olympic program except for the St. Louis 1904 and the Amsterdam 1928 games.  Women’s shooting events were added at the Los Angeles games in 1984.

Shooters have won more gold medals for the U.S. than has every other type of Olympic event except for swimming and track & field.  Shooters rank sixth in total medal count behind boxing, wrestling, diving, swimming and track and field.  Even the Winter Olympics has a shooting event called the Cross-Country Biathlon utilizing a rifle.

Since the Olympics in London occurred shortly after the movie theater massacre in Colorado, the Shooting Team USA received death threats.  Kim Rhode commented to the media following the December 2015 deadly shooting rampage in San Bernadino, CA.  While expressing sorrow for the victims and support for gun rights: “You don’t hear the media asking NASCAR Drivers to comment on crimes involving cars.” (Courtesy of USShooting.org)

Sadly, despite the success of U.S Shooters, only one athlete has been voted into the U.S. Olympic Hall of Fame.  Lones Wigger, Gold Medalist in 1964 and 1972 became the one and only “token.”  According to Margaret Murdock, 1976 Silver Medalist: “Shooting is controversial in the United States because of liberals badmouthing it.”

The Shooting Sports have been given the Bum-Wrap at the Olympic Games.  No other sport at the Olympics is vilified to the extent its’ athletes receive death threats and little media praise for its’ accomplishment.   Recent additions, Synchronized Swimming and Rhythmic Dance receive more acclaim and coverage than Shooting.  This is shameful as shooting has been in the Olympics since 1896 and only the United States has captured more medals in this sport than any other country in Olympic History.  That’s to be applauded, not hushed.