Skip to content
Blog.GritrSports.com > How to Guides > How To Hunt Feral Hogs
How to Guides 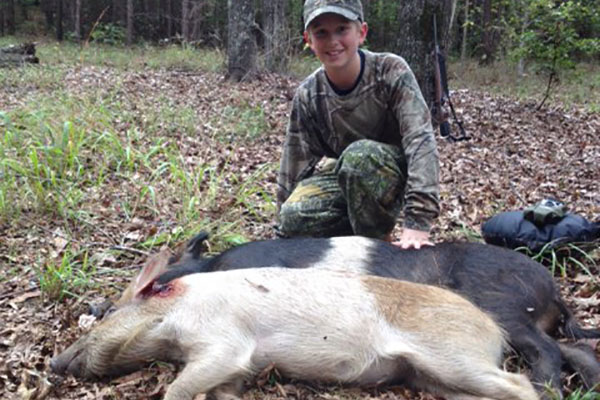 Easing into the swamp, I heard the tell tale racket of a sounder of hogs feeding. Their social grunts can be heard at quite a distance in the southern swamps where I was hunting. They were heading in my direction but were still too far to locate. Easing behind a large cypress, I watched and waited. One by one they began to appear as they fed along the creek. The sounder was large with at least twenty animals all milling around. My heart began to race fearing I would be spotted before the large black and white boar that was bringing up the rear presented a shot.

A small red pig fed past me on the right, another white one fed past on the left. I sat motionless watching the big boar getting closer. Down into the creek he fed and up the other side. At thirteen yards he presented the shot I had been waiting for the past fifteen minutes. At the report of the gun, pigs went everywhere, except for the giant boar that fell dead in the creek.

There is little doubt hunting feral hogs is one of the most exciting hunts available to hunters across the country, and it is one that if you have not done, you should consider.

Hog Hunting On The Rise

There is a new passion in sporting life in America. It is new to many, but a tradition to many others. Hunting feral hogs, wild pigs, pigs, hogs, whatever you choose to call them, they are a plague in many areas and a great resource in others. While some areas are using every means possible to eradicate feral hogs from their property, other areas of the country are profiting from the hunting opportunities these formidable animals provide.

The USDA has said there are only two kinds of properties in the USA now: “Those that have feral hogs and those that will have them.” There are many theories as to the reason for the hog explosion that has occurred in the past decade. One thing is sure, it has been massive. States that never had hogs now have an abundance. States with historical populations have seen a spread and expansion of the species’ territory. Here in my home state of South Carolina, we have had hogs since our founding in the late 1600’s. These hogs have stayed relatively close to the rivers that flow through our state for the past three hundred years with little expansion. They were largely confined to a few counties in the coastal plain. Over the past fifteen to twenty years, we have seen an explosion of their population. Today, all forty-six counties have healthy populations and they are expanding rapidly. A recent study showed that with the rate feral hogs reproduce (2 litters a year of 6-10 babies each) and with no natural predators, their population in an areas can reach mind boggling mathematical proportions in a few generations. Charles Ruth, Project leader of the Department of Natural resources in South Carolina, says: “We would have to remove roughly 80% of the current population every year just to maintain the current population.”

What this provides for hunters is an expanded season and opportunities. Many states have no closed season, and no limit on feral hogs. There are certain weapon restrictions in some areas, but the season doesn’t close. Check with your local state to see the specific seasons, and weapons allowed to hunt feral hogs.

There are basically three ways to hunt hogs across the country. Still hunting them, spot and stalk and hunting the use of hounds. We will discuss the first two in this story. Hound hunting for hogs is such a large topic we will save that for another story.

For the casual hunter looking to go after hogs for the first time, there are some things to consider. First is the weapon you are going to use. Gun hunters can use the same guns and calibers used in hunting whitetail, elk or mule deer. Big hogs are tough and difficult to kill quickly. I would definitely recommend calibers beginning with the .30 calibers and going up in size. You cannot have too big of a gun when hunting feral hogs, but you certainly can have too small of a gun. Anything in the .27 caliber is very marginal and anything smaller should be left at home. We all know of those who use a .223 or a .243 for brain shots. But for most hunters these should be left to experts not casual hunters.

Personal preference is to the .30-06 and the .308 as these are just about the best hog killers I’ve personally seen. However for those (like me) who are always looking for a reason to get another rifle, some of the big bore lever guns make excellent feral hog guns. Most of the places hogs can be found are thick, close cover, and the big bore guns work excellent. A personal favorite is the Marlin 1895 GBL in .45-70. This little heavy weight is the perfect spot and stalk gun for the thick swamps of the southeast.

For those who prefer a little different challenge, muzzleloaders should be in the .50 caliber or .54 for effective and quick kills. Anything smaller is just not going to be enough gun. Handgun hunters should stick with the .44 Remington magnum or larger. I know some who really like the .41 magnum, and while it can kill hogs, you never know when the giant hog will show and the heavier .44 Rem. Mag will get a lot more penetration over the .41 magnum. If using the bigger bored hand cannons, they are all capable of killing the biggest hog.

As mentioned, hog are very tough animals and they can be difficult to kill. Bullet placement is crucial. To drop a feral hog in his tracks, nothing beats a well-placed neck shot. Aiming two to three inches behind the ears in line with his eyes will leave the hog in his tracks. Hogs do not bleed much, and trailing is difficult in the thick areas they call home. When you can, the neck shot is the best option to getting a quick kill and dropping him in his tracks.

Still hunting for hogs is usually done over bait. Hogs have a certain affinity for shelled corn. Timed feeders are the easiest way to condition hogs to coming in to a certain location. Setting the feeder to disperse corn several times a day will get the hogs in the area, and they will usually stay as long as food is available. Elevated stands or popup ground blinds work well in this situation. Remember that hogs have an excellent sense of smell and will detect you at a great distance so hunt the wind!

Feeding hogs are always moving. Once you select a hog to shoot on a feed pile, do not expect him to stand still and give you a prime shot. You have to pick your spot and as soon as it is presented, make the shot. It is not uncommon for the rest of the hogs to scatter at the sound of the gun, but return in a few minutes to continue to feed. Multiple kills are not out of the question.

Hunting hogs is one of the most exciting hunts available across the country and with the expanding populations gaining access is easier than ever. Give it a try and get out there and get some bacon.