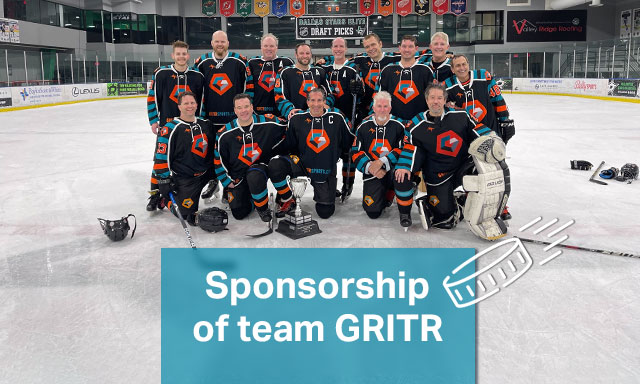 The move of the Minnesota North Stars to Dallas in 1993 formally cemented hockey as a top tier sport amongst Texas fanbase.  In fact, hockey has been in Texas since at least 1941, when Dallas Texans first took to the ice.  While the arrival of NHL brought the glamor of professional sports, it was amateur hockey that was responsible for preparing the fan base.  As companies continued to relocate to Texas from the mid 1980s all the way through today while seeking better business conditions and cheaper real estate options – many have brought with them employees from such hockey crazy states as Michigan, Minnesota, New York and Massachusetts.  It was these transplants from the “Yankee” states plus our Canadian neighbors that now make up the players that participate in amateur hockey leagues in Texas

“GRITR Sports ethos of ‘grit and resilience’ is very much represented in every hockey game I have ever been a part of” – says Mikhail Orlov, CEO of GRITR Sports and Outdoors – “being able to sponsor a team is both a privilege and an honor.  As we face other teams – a common question comes up – what is GRITR?  And while we do have a brand – GRITR is more of a state of mind than anything else.  It’s the belief that even in the most difficult circumstances – we find a way to move forward, while lifting the ones standing next to us.  And this state of mind is something that our society needs more and more these days.”

GRITR Sports and Outdoors (https://gritrsports.com)  is an omni channel retailer that serves customers through its physical store, website and marketplace presence on Amazon, Walmart and Ebay.

Integrity Hockey League (https://www.integrityhockeyleague.com)  is part of the Metroplex Christian Hockey Association (MCHA), a non-profit 501c3 organization. It’s a Christian-led outreach ministry dedicated to sharing the Good News of Jesus Christ with the ice hockey community. Over the years the MCHA has grown from just a few teams to over 30 teams in 6 skill divisions. With programs ranging from competitive adult leagues to novice leagues, Integrity Hockey League strives to provide a safe and fun environment for the ice hockey player, their family and friends.