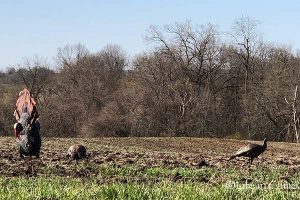 If you are an avid turkey hunter, you are sure to own several turkey decoys, if not your own large flock. Every season, new decoys hit the market; some new and improved, and others just a little different. I have always been drawn to the something “a little different.” I usually start combing the magazines, newsletters, press releases early in the year and I hit the annual NWTF Expo floor in search of new products, especially decoys. One that really caught my eye was the GHG Jekyll & Hyde Decoy by Avery Outdoors.

Evolution of the Turkey Decoy

I have only been a turkey hunter for a little over a decade, but I remember having to straighten up the gear room and put away turkey decoys that my husband had recently used. I have witnessed the evolution of turkey decoys over the past 25 years and based on that knowledge, I find it amazing that the older foam or blow-up decoys could ever fool the impeccable eyesight that turkey have. I have looked at harvest photos from days gone by with decoys that reflect sun. Not only were the materials subpar for replicating a turkey, the design and actual colors were nowhere near accurate. 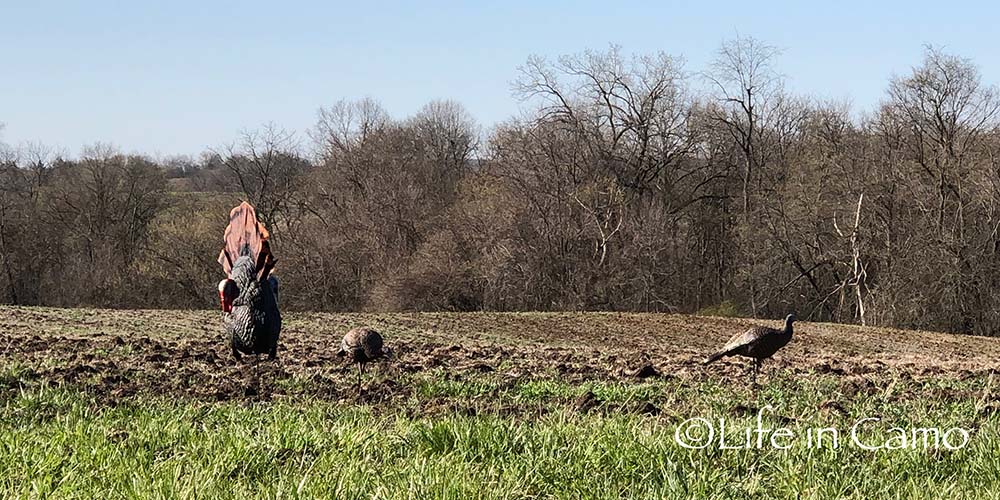 Today’s quality decoys are so life-like in features and colors that they realistically look like a wild turkey, even at a close distance. The only real problem with these quality decoys is that not every hunter has the budget to own a few of them. As of recently, these realistic decoys have become more affordable for any turkey hunter’s budget. Nearly every decoy company has increased their product quality, and many have lowered the prices of their decoys to remain competitive in the market.

Gone are the days of staking out a strutting tom and hen. That was the favored decoy set-up for so many turkey hunters in days gone by. There is no doubt that this was effective and many birds fell to this setup as it mimicked an opportunity to breed or for an dominant tom to fight an intrusive trespassing bird. Until about ten years ago, basically all you could find on the market were strutting toms, strutting jakes, standing hen, and a feeding hen. 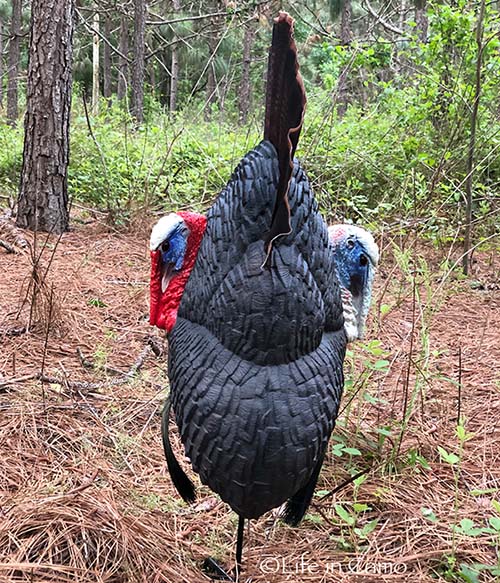 As of the last ten years, just about every natural pose of the wild turkey in various scenarios can be found on the market. Many of these decoys are available in a choice of various turkey species; there is even an albino hen available. Popular decoys like the subdominant jake or tom, a breeding hen, a content hen, a boss/look back hen, walking hen, alert hen, and a tom and breeding hen set have all proven themselves in the field. Within the last five years, motion decoys have also become popular. Some designs are activated by wind, some motion activated by a string, and others generated by battery and remote. Not all states allow the use of electronically movement generated decoys but most do.

Another style decoy that has become popular with many turkey hunter are the reaping decoys. Several are made to be used as a reaping decoy and can quickly convert to a staked decoy. Also, a new popular style of decoy is a 3D printed material fan held in front of the hunter with an umbrella-style handle, or clip-on style 3D material fan tail that clips directly to a shotgun or a bow. 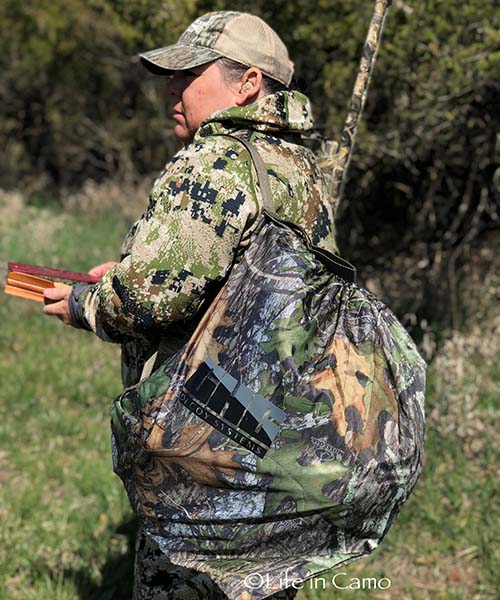 I found an innovative decoy to try this season, the Avery Outdoors GHG Decoy Systems Jekyll & Hyde decoy. This decoy was turning a lot of heads on the expo floor; which is ironic since the decoy itself has TWO heads.

The Jekyll & Hyde is unique in design by incorporating two turkey heads in one decoy: an aggressive red head on one side and a submissive blue head on the other. The decoy’s motion stake allows the decoy to turn easily by wind or by live birds. The flexible EVA construction results in a lightweight decoy resembling life-like colors. The two molded sides leave ample room at the top to insert the included fabric fan or to add a real tail fan for a more realistic look. The tail fan slot is designed for the fabric fan or real tail fan to slide down in between both side, and it rests perfectly in the molded area. An elastic cinch style carry bag is included that is large enough to store the decoy, motion stake, fabric fan or a real tail fan. 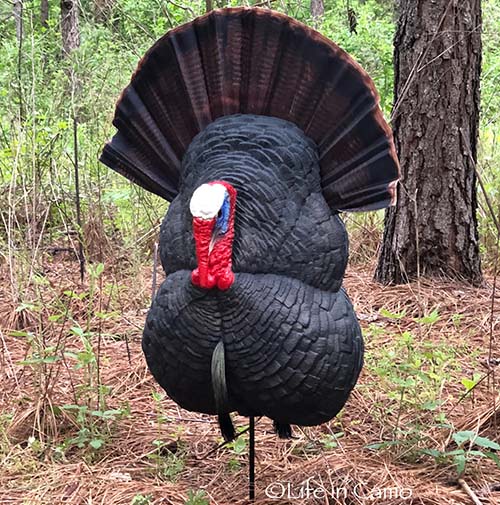 The unique style of this decoy will surely hold the attention of other birds longer keeping them in your shooting range for the perfect shot. This was evident on my first hunt with the Jekyll & Hyde. Two jakes crested a terrace with the subdominant head in view. The two jakes immediately took an interest in the decoy and quickly approached the decoy. When the jakes were within 5 yards of the decoy, the air changed and the decoy began to slowly turn. As it made the 180 degree turn and the dominant head was visible, one of the jakes made several fighting purrs as it bumped into the other Jake that was completely still and at alert. Both jakes began to bob and duck their heads, not shying from the decoy but in curiosity. 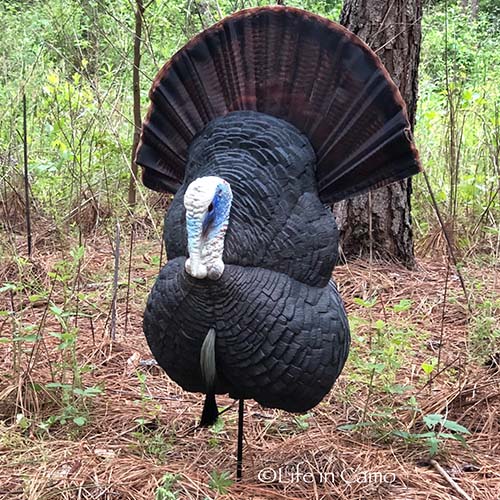 Finally, the decoy started to turn again, and as soon as the subdominant head was visible, one Jake quickly approached the decoy with the other right on its heels. The movement stirred the air enough that the decoy twisted back around to the dominant head. One Jake stepped back as the other started to go into strut. Still, it was so curious bobbing and ducking its head as if trying to look at both sides. It was evident the Jake was a little intrigued and confused at the same time. Nearly fifteen minutes later, the less dominant Jake started to feed off in the other direction. When it topped the terrace the other Jake turned to follow, but not without stopping half way to look back and stare a moment longer at the Jekyll & Hyde decoy. 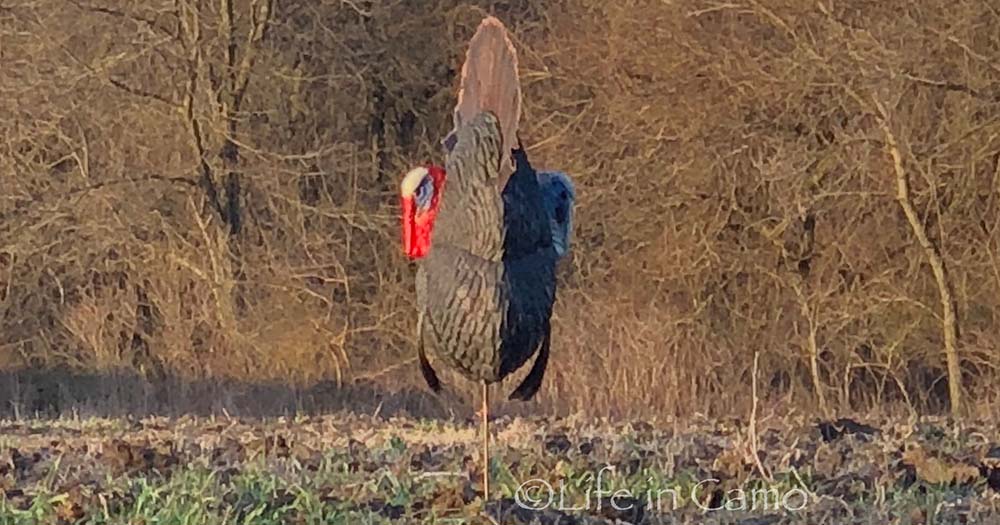 I am looking forward to hunting this weekend with the GHG Decoy Systems Jekyll & Hyde Decoy by Avery Outdoors in an area that holds several mature toms. It will be interesting to see their reactions based on that of my first experience, however, I hope that the end results doesn’t give that mature tom a chance to glance back for a fleeting look.

Endorsement Disclosure: Per the guidelines of the Federal Trade Commission, the products reviewed or mentioned within this writing is an endorsement and the writer may or may not have been compensated by “in-kind” payment to review the product. Logos and photos are the sole property of the rightful owner and used within this writing solely for the promotion of products herein as requested by the product’s manufacturer or in efforts of product exposure for the manufacturers.