Skip to content
blog.GritrSports.com > Conversations > Does Your Self-defense Gun Need A Caliber That Starts With A 4?
Conversations 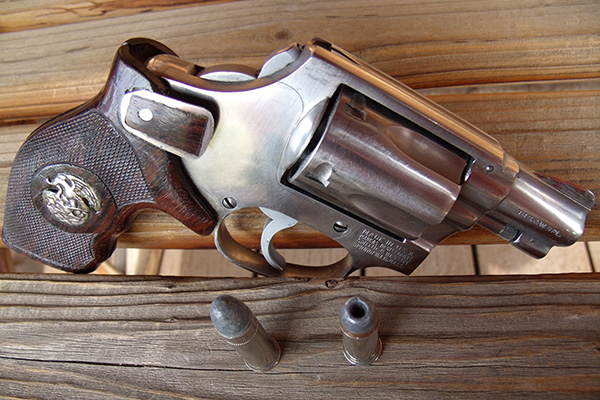 Back in the 1960’s, people started to think about personal protection with a handgun. There was a revolution, led by gent by the name of Lee Jurras who started a company called Super-Vel, and they turned personal protection (and police) ammunition into something more effective.

Prior to his developments, pistol ammo came in two flavors: round nosed lead for revolvers, and round nose jacketed for semi-autos. The jackets were needed to make sure the rounds did not get hung up on their trip into the chamber. Neither type of ammunition was known for its effectiveness. There were a few soft point and hollow point rounds, but they were considered suitable only for hunting.

Police officers found that outlaws soaked up lots and lots of 158 grain round nose lead (RNL) bullets without stopping. They absorbed so many that the classic round became known as the “STOP, or I’ll wrinkle your suit!” round. If the crook was in a car, it was “STOP, or I’ll dent your paint!“ Cases of outlaws being hit center of mass with 10, 12, and more rounds and then continuing to fight were well known. In at least one case, the 158g .38 Spl round failed to penetrate a heavy leather jacket!

Civilians of the day, not limited to revolvers (although they were the ONLY compact guns around), tried semi-autos. But with the full metal jacket rounds, the only way to get more effectiveness was to go to a larger bore. Col, Jeff Cooper advocated the M1911 in .45 ACP, and the saying became “They all fall to hardball.” Hardball was the name used for the G.I. .45 round with its hard jacket.

In truth, they did not “all fall,” but it was a catchy phrase. Some outlaws were hit multiple times with .45 hardball, and kept on fighting. But they were fewer in number than those hit with the .38 SPL rounds. Some cops started carrying .44 Spl and even .44 Magnum revolvers. Smith & Wesson developed the .41 Magnum as the “Ideal Police revolver” with greater diameter than the .38 and less recoil (in the “police load”) than a .44 Magnum.

Enter Mr. Jurras, who made light weight jacketed hollow point ammunition (JHP) at high velocities. Suddenly, more bad guys were falling to the .38 Spl and .357 Magnum rounds of police and the public. The publicity made one think it was a new era – but there were still those who took a lot of shooting before they would stop. It was an era of “it’s new, it’s shiny, so it must be better.” Science? Who applied science to bullet expansion?

Sadly, it took blood on the streets before science sort of got involved. In the notorious Miami shootout of 1987, two FBI Special Agents were killed, and three others seriously wounded, by two outlaws. Finally, someone in authority thought: “There MUST be a better way!” So the Wound Ballistics Workshop was convened as a gathering of all the better known students in the field.

Some of the conclusions from this meeting were – and are – worth noting. For example, how do bullets stop bad guys? There are three ways:

The end product of the meeting and its follow-on developments is the FBI ammunition test protocol. When it was introduced, it was hailed as a marvel – and condemned by the FBI scientific branch as, well, not based on science. It called for using “ballistic gelatin,” made to an exact formulation, kept at a specific temperature, and tested with a pellet gun firing a given pellet at a certain velocity range penetrating a certain distance. It may be imperfect, but at least it gives a uniform standard to measure different rounds, in differing calibers, of differing construction. At last we were not trying to compare BB’s and baseballs! And decades of use has shown that it does offer end products that seem to work uniformly in actual shootings.

The subject ammunition is fired into the material, and its expansion and penetration are measured. There are several tests, to replicate light and heavy clothing, wood, auto sheet metal, and auto glass. Each round must penetrate a certain distance (but not over penetrate) and expand a certain amount.

As usual, if you develop a test for a product, everyone starts to find ways to pass the test – just like children get the education needed to pass a test rather than what they may need in the real world. Today, all the major manufacturers make ammunition that meets the FBI test protocol – Winchester, Remington, Federal, Black Hills, Hornady, and others.

Hornady even has two different lines of defensive ammo, Critical Defense, and Critical Duty. Critical Defense is aimed (pun intended) at the civilian market. In civilian defensive shootings, the outlaws are usually close – “bad breath distance,” and all that needs to be penetrated is their clothing. This ammunition is tested against bare gelatin.

Critical Duty is their offering for the Law Enforcement market where officers are expected to run toward the sound of gunfire. Officers often have to shoot through things, so Critical Duty is tested on all of the FBI protocol. By the way, civilians can buy Critical Duty ammo.

I got to live through the evolution, as I was a Federal Agent for 27 years. The first “bullets” (yes, that is what they called them) I was issued were – the .38 Spl 158g RNL load. I quietly “forgot” to load with them, and carried some JHP’s I had on hand. Shortly after signing on, I was detailed as a Sky Marshal (predecessors to today’s Federal Air Marshals), and on our training day – yes, just one day – I was given 12 rounds of Super Vel 110g JHP ammo for my S&W M60. Seems they did not want our rounds to enter the cockpit where all the important ‘stuff’ and people are.

Later, the Treasury Dept adopted the Winchester “Q4070” load – a 110g bullet that left the 2” barrel at 1,100 feet per second. I have cronographed this load through my Smith & Wesson M60 with its 2“ barrel, and it does indeed meet that standard! This was probably the first +P+ ammo! All reports were that this round was far more effective than that RNL load.

Over the years, contracts were let for JHP ammo for our issue 9mm handguns, and we were allowed to carry our own semi-automatics in .45 – which I promptly did. Post 1987, all the major makers tested their ammo against the FBI protocol, and the Government – who buys millions of rounds of handgun ammo – required anything they bought passed the protocol.

Today, almost all JHP defensive handgun ammo passes the protocol, and departments are finding that there really is no statistical difference in effectiveness of the 9mm, .38 Spl., .40 S&W, and .45 ACP rounds in actual shootings. Other major factors are the improvement in firearms design including sights and training. Yes, back in the day I had to qualify single handed on round bullseye targets. When I retired, all qualification was from the holster, with duty ammo, at humanoid targets, at speed. Plus, we had to pass tactical course that replicated what we, as investigators, did in the field.

Even the FBI has seen the light and announced that they are moving from the .40 S&W to the 9mm. Like many other agencies, they have found that:

Does your personal defense ammo need to start with a ‘4?’ NO! But if you prefer to carry the larger, heavier gun, make sure via training and practice that you can shoot it as well as a 9mm.

I personally draw the line at .38 Spl and 9mm for defensive calibers. When you look at the ballistics of smaller rounds, like currently fad of .380 micro-guns, you see comfort winning over effectiveness. The problem with a .380 is that it makes you THINK you are armed.

Ammunition makers habitually test their ammo out of the longest barrels available. Fired from actual guns, velocities are usually less – sometimes dramatically so. And the bullets weights are much less as well. You can’t expect to haul a load of rocks in a smart car, you need a pickup truck. Why would anyone expect an 88 grain bullet at 900 feet per second to do the work of a 124g bullet at 1200 FPS ?

While there have been great advances in ammunition, we still can’t repeal the laws of physics. But a small 9mm or .38 may be able to do the work – IF (big IF) you are competent with it. Competence come from training and practice – realistic practice, at close range, on partial humanoid targets, under stress, and while you move off “the X.” Then, you can make an informed judgment about the size and caliber of the gun you will depend on to save you and your loved ones.

The perennial question remains – How much is your life worth?