Skip to content
blog.GritrSports.com > Conversations > Do I Need A Backup Gun?
Conversations 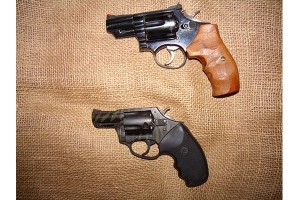 From time to time, this question comes up – should I carry two (or more) guns? Most often, it comes from someone who either has read Clint Smith’s famous quote: ‘Two is one, and one is none,” or these days, from someone who fears their chosen sidearm will fail when needed most – the Murphy’s Law syndrome that “whatever can go wrong, will.”

This year marks 50 years that I have been carrying a concealed handgun for personal protection. Included in that time span is 27 years as a Federal Agent, 25 of those years as a Treasury Department Firearms Instructor and 9 of those years as the lead Firearms Instructor at our Western Academy. I taught over 5,000 men and women both basic and more advanced, in-service firearms use, with both revolvers and semi-automatics. I have also investigated several shootings, and I have acted as an expert witness. So, I have formed a substantial opinion about this question.

My primary level of defense has, and always will be, awareness of my surroundings. Just like when you drive a car, you constantly scan for “threats” – drivers who are texting, speeding, ignoring STOP signs, and the like. Out of the car, I scan for the folks who “don’t fit” – wearing heavy coats in warm weather, shades at night, or scanning the area for security cameras and the like. I also scan for exits – including the unseen ones that are there, like the kitchen exit in all restaurants.

When I was in law enforcement, I was always ready to act if something went bad. Now, I am always ready to leave if I can, be a good witness if I cannot, and fight if I must. My priorities got reordered since it is no longer my job to “separate the salt of the earth from the pepper.”

I am satisfied that my non-verbal communication of my readiness has caused several outlaws to defer their evil acts. I subsequently communicated my suspicions and descriptions of the suspects to the local police which, I understand, has resulted in a couple arrests. Perfect! The bad guys got caught, and I don’t have to put on a tie and testify in court!!

My secondary line of defense is that my concealed firearm is really concealed! I am so used to concealed carry that I feel uncomfortable wearing a gun openly – even at a match, or here on the ranch. Since I intend to always win, I always cheat, and one way to cheat is to never give away an advantage. So I never let a stranger know I am “heeled,” as we used to say in the West. All those “cop-ly” tee shirts and match or training souvenirs are only worn either here on the ranch, or under something that covers them completely.

To my knowledge, I have only been made – observed to be carrying a gun – once in those 50 years, thanks to an unexpected gust of wind. I put a lot of effort into concealing my hardware, as in some instances the consequences of being “made” would have been far more severe than a curffule and showing my CCW to an officer. The trade-off is being able to conceal the gun, and being able to access it quickly if needed. It takes work, thought, a different wardrobe, and along the way I have accumulated several boxes of excellent holsters that just did not work for me.

“But guns are mechanical devices that can fail!”

Absolutely true, and generally irrelevant. After training those officers at the Academy, I realized several facts:

By the way, our issue guns of those days were Smith & Wesson M6906 9mm pistols, and we fired factory fresh 9mm 147g JHP ammo in them. And after class at the range all officers cleaned their guns while we watched.

As a result, I concluded that an unmodified gun, properly cleaned and lubricated, and fed fresh, factory defensive ammo, was darn near unstoppable, at least for the first 20+ rounds.

“But my gun could jam – it could even break!”

Yup, it could – which is why you practice immediate action drills, right? We found that when a revolver failed, it took an armorer with tools about 10 minutes to fix it. When a semi-auto jammed, the shooter could fix it on the line in less than 5 seconds.

A further lesson about guns breaking came from several other incidents. The first was an officer who had difficulty qualifying with his revolver. He was determined to become a better shot, and fired thousands of rounds. He did improve, a lot, but he actually wore out his Smith & Wesson M19 .357. The gun still worked, but it was getting loose, so we issued him another. We later found that S&W considered the service life of a revolver to be 10,000 rounds. Plus, we used the Q4070 load, which was the first +P+ round, a 110g bullet at 1,000 fps from a 2” barrel, which is very hard on guns.

Another lesson I learned was with my issued 6906. As you might suspect, I shot that gun – a lot! No, even more than that! After a qualification run, as I went to clean my pistol, I found that the frame was cracked! This had not kept me from shooting a perfect score, and I carried that gun for another 2 weeks until a replacement arrived from headquarters. I have also cracked the frame on a personal 1911 .45, which has not reduced its accuracy or reliability either. Go figure!

So, given all of the above, I never carried a 2nd gun. Well, if I knew I was going someplace with real bad guys, I carried a Remington 870 shotgun or, later on, the issue Styer AUG 5.56 with a 42 round magazine, turning my handgun into my second gun. I also invited all the guys & gals in the office to bring their guns!

I only met one Federal Officer who carried 2 guns, and he carried them both every day. He was a tracker in the Southwestern desert, and spent most of his time on foot, away from his vehicle, but with the rest of his team. No one ever commented on his choice – it was his to make.

There are those who take the “one is none” saying to extremes – a carry gun, spare ammo, backup gun and spare ammo for it, two knives, two flashlights, two expandable batons, where does it stop? Where do you hide all that stuff, particularly on a hot day when everyone is in a tee shirt & shorts? Even that great guru, Jeff Cooper, conceded that if all he was doing was going for the mail, he would just slip his wife’s 2” .38 in his pocket. Of course he may have had more in his vehicle.

So, do you need two guns? If you are a uniformed officer, YES! One in plain view, and one hidden for when things go really, really bad. If you wear a gun openly, you should consider another one concealed. You may find that two guns, even without spare ammo for each, is too much hassle, too much weight, and too much bulk. By the way, I always wonder about officers who carry a .22/.25/.32 or .380 as their backup gun. Yes, the target is likely to be very close, but your world has already turned to crap, your need is urgent, and this is your last resort. In this moment of ultimate stress, you put your life on a .380? Best of luck!

If you carry concealed, do you want the hassle of trying to conceal two guns all the time? I have an acquaintance who carries not one, not two, but three guns at all times, even inside his home – and he lives in a nice neighborhood in a quiet town. He carries one for his left hand, one for his right hand, and one he can reach with either hand. His guns of choice are S&W 5 shot M60’s – with spare ammo. But his choice leads him to a certain style in clothes that does not always blend in. So what, it is his choice to make.

If you make that choice…

If you decide to carry more than one handgun, I do have some suggestions. Number one is make sure both guns have the same operating system. That is, if you prefer a 2.5” S&W M19 revolver for your primary, your backup should be a S&W revolver – say a M60, or a Charter Arms, which works exactly the same. Don’t mix a single action automatic and a revolver, a striker fired semi with a DA/SA auto, or any other mix of systems – that is only asking for trouble when, under the ultimate stress, you spazz out and get silence when you really, really need loud BANGS! If you are a uniformed officer, a mini or micro version of your principal gun is the way to go – particularly if it will accept your main gun magazines.

Number two – PRACTICE with your backup – a lot! As I noted above, if you need your 2nd gun, things have already gone from bad to “OH CRAP!” I have seen officers who carried a backup forget all about it, and work to clear their main gun when they could have solved the problem in less time if they used their backup. Practice may also lead you toward changes in your holsters and mode of dress. Better to find out on the range, than when it is your turn!

Also keep in mind, the smaller the gun, the more expert you need to be with it. The sights are usually smaller, and they are much closer together. You need lots of expertise to place your shots where they need to be.

Ultimately, the facts remain these:

As for me, I’ll stick with my reliable, well cleaned and properly lubed single gun, stoked with factory ammo, that I have trained with and practice with regularly.

Choose wisely – all you are betting is your life.