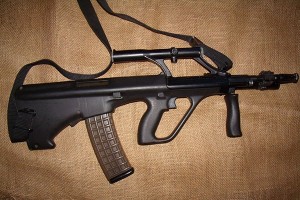 Bullpup – what an odd name for something that has nothing to do with either cattle or dogs. A Bullpup is a rifle or shotgun, where the action lies behind the trigger group. This allows a long barrel in a short overall length firearm.

The very first Bullpup firearm I ever handled was many, many years ago, in the West Point Museum. Back in those days, after touring the regular museum, you could ask to see the “Collectors museum,” which was behind locked doors. Here were the guns their either could not display due to space considerations, or simply chose not to. I recall a chrome plated M1903 Springfield rifle, serial number 00000. It was one of the very first, sent to West Point so the new officers of the Army could handle the latest innovation.

Among the rifles was a WWII bolt action M1903 in a very odd stock, which placed the action behind the trigger. Intended for the then brand new paratroopers, it was a nightmare! After each shot, the sky soldier had to remove the rifle from his shoulder, remove his hand from the firing grip, and work the bolt. I have seen a few pictures of airborne troops armed with these abominations, but as far as I can tell, thankfully they never made it to combat.

Semi and fully automatic rifles make the best bullpups. Here, the rifle only needs to be dismounted for reloading – and in some models, not even then.

In full disclosure, I have owned a semi-automatic Bullpup since the late 1970’s – a Steyr AUG in 5.56. Later my Law Enforcement agency, U.S.  Customs Investigations, adopted the AUG in the semi/3 shot burst configuration, and I was the lead instructor at our Western Academy on the AUG. So I have fired, and supervised the firing, of thousands of rounds through bullpups. I have, over the years fired several other versions, and found their good and bad points.

As mentioned, a Bullpup allows a long barrel in a very short package. This makes for easy handling around cars, trucks, planes, and boats. At 6’ and close to 200 pounds, I’m no small guy. At one point, my issue vehicle was a Chevy S10 compact SUV – a tight fit. But I could deploy my issued AUG with ease, when an M4 with the stock collapsed or an 870 shotgun with the police issue folding stock was…..difficult. And in law enforcement engagements, time may be your most precious commodity.

The long (actually full length) barrel means you get every bit of velocity out of your ammo – and important point where the ranges could be long, and a “failure to neutralize” could prove fatal. Small, light, projectiles need velocity to expand and stop the outlaws.

While short barreled rifles (SBR) are all the rage, a rifle with a barrel less than 16 inches in length requires Federal paperwork and a long wait. A Bullpup can be as short – sometimes shorter – without Federal registration. With the AUG, locking the bolt back and pressing a button while twisting the barrel allows you to replace the barrel with one longer, or shorter. So you can go from a 24 inch precision marksman barrel to a 16 inch entry length rifle in seconds.

In my official capacity I have worked around aircraft, boats, cars, vans, and houses. I recall covering an undercover officer from inside a van, before we adopted the AUG. My choice was a shotgun or a handgun – and the shotgun was impossible in those close quarters. Searching single wide mobile homes was equally bad. With the Bullpup, they were much easier to maneuver in. Small planes and helicopters were the same way – getting out in a hurry required a lot of maneuvering. Even oceangoing ships have some tight spaces.

Another advantage of the full length barrel in a Bullpup is reduced noise and blast pressure. By no means am I suggesting you shoot any rifle without ear protection (unless it has a top notch suppressor attached), but indoors, even with ear protection, moving the muzzle closer means more blast and pressure. So, an SBR may be louder than a Bullpup of the same overall length – ‘a difference without a distinction‘, as either can make you deaf with just one shot – particularly indoors.

The Not So Good

With the action behind the trigger, there must be a lengthy linkage between the trigger and the sear. Thus bullpups are well know for “spongy” triggers. In fact, the only production Bullpup I have fired with a good – a really good – trigger is the current run of M17S rifle from K&M Arms. They have outstanding triggers, as good as any competition AR.

With few exceptions, bullpups are shoulder specific – I have fired my AUG from the left side and found that it tends to eject the brass forcibly, directly into my mouth! Even with my mouth closed, the edge of the neck on the brass tends to cut my lips and face, which does not improve my looks! The Styer solution is a reversible ejection port cover, paired to a left handed bolt with the extractor and ejector reversed in their positions. They work just fine, but obviously this is not a field expedient solution. The MS17 has a shell deflector that was highly effective, and the rifle was easily shot from either side. For some models there are snap-on deflectors, and one model ejects the brass out a tube to the front!

The manual of arms is completely different from the AR series – not slower, just different. For one thing, the balance of a Bullpup makes it easy to control the rifle with one hand – your firing hand. I have accurately fired my Bullpup one handed at moderate ranges! Even with the long 24 inch barrel, the rifle is neutral, rather than muzzle heavy. On the AUG, the fast reload with 30 round magazines is to acquire the fresh mag, and use the spine (back edge) to press the magazine release. The empty drops free, you insert the fresh mag, pull the operating handle back and release, and reengage as needed. Total time off target is about the same for a trained shooter as with an AR, and as with the AR, your master hand never leaves its’ firing grip. For some reason, this technique does not work with the 42 round magazines, as they do not drop free.

Other bullpups have revised controls, which could make them even faster on the reload. It is all a training issue, as with any other weapon system. Of course if you have not “solved your problem” with 30 rounds, you have a really BIG problem.

Non-optical (“iron“) sights on a Bullpup are another problem. They must be very close together, making it hard to use them for rapid, accurate shot placement. Of course over the years red dot and low magnification scopes had reached the level of reliability and battery life that this is not an issue. All the latest bullpups have rail sections for optional sights, lights, etc.

For a “fighting” rifle, I like the Bullpup design. With the weight behind your strong hand, the rifle feels lighter than what the scale says. The guns feel lively in my hands, easy to relocate from target to target. I have shot in competition with my AUG, and done as well or even better than I can with an AR. Today’s bullpups allow the mounting of multiple sights, so you can have a magnifying sight as well as a red dot and/or a laser. I find the reduced length handy when opening doors or windows with my off hand, as well as negotiating some of the odd positions and awkward shooting positions course designers prefer.

For my former role as a plain clothes investigator, the Bullpup is the way to go! It is concealable under an outer jacket (particularly now that it seems everyone in walking with their head down, texting), does not require any two handed actions, such as extending a stock, and as noted is viable in all environments, no matter how close the confines. Plus, I found that I could sling the rifle across my chest or back without looking like I had a long gun in reduced light. Of course as noted, I already sported a “bulky” silhouette.

Bullpups are in wide use in various militaries, in part because even the infantry often ride into battle in armored personnel carriers. If you ever want to find out how a sardine feels, just squeeze into the back of a loaded APC!

The Bullpup is in use by the British as their principal rifle in the L85 (SA80), the Austrians (AUG), Australians (AUG variant), Saudis, Israelis (Tavor), the Chinese with a home grown version, and many police and border patrol agencies. In fact a British unit did a successful bayonet charge during Desert Storm with their bullpups.

I’m sure many with experience with the AR series will challenge “which is better,” and that is fine. It’s kind of like revolvers vs. semi-autos, what works for you is what you should choose. But before you discount the Bullpup, try one and really wring it out. You may just find you have been missing out on a good thing.