Skip to content
blog.GritrSports.com > Conversations > AUTOMATIC? What Does That Mean?
Conversations 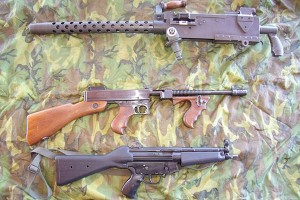 Since this is an election cycle, lots of firearms terms are being thrown around that neither side really understands. In the area of firearms, there are a large number of terms, phrases, and acronyms that need to be fully understood in every conversation.

To define the terms, an “Automatic” in common usage is a Semi-Automatic – so what’s the difference? A Semi-automatic, also known as a self-loading pistol, shotgun, or rifle, fires, extracts and ejects the empty case, cocks the firing mechanism, and loads and chambers the next round. Then the action stops, until the trigger is released and pressed again.

A Fully Automatic, aka a machinegun, Title II gun, or Class 3 gun, does all of the above, BUT also releases the firing mechanism to fire the next shot, and will continue to do so until you release the trigger or run out of ammo. These are rare, very valuable, and, to the surprise of many, completely legal in most states. There are about 160,000 legally owned machineguns in private hands in the United States – and they are the guns least likely to be used in a crime. In fact every owner of a machinegun has had to submit fingerprints and a photograph, and undergone a background check in order to obtain their gun(s). We will go through the purchase process after we cover some other items.

How can anyone tell if the firearm they are considering buying is a semi or full auto? It’s fairly simple, and known by the Alcohol, Tobacco, Firearms and Explosives employees as “Field Test #1.” Here are the steps:

That is all there is to it. The test is not definitive, as the gun could simply have a broken part in it, or be so far out of adjustment that it allowed the firing pin to fall as the action closed, known as “following,” as the firing pin or hammer “followed” the bolt closed.

Why do you need to know this test? Because lots of machineguns have been “cloned” as semi-autos – even belt fed guns.  I have seen ads for semi-auto Browning Automatic Rifles (BARs), WWII style M1919A4 and A6 belt fed guns, and many more. Plus we are all familiar with the AR15 clones of M16’s, and semi auto AK47’s.

Along with machineguns, and covered under the same laws, are Short Barrel Rifles (SBR) and Short Barreled Shotguns (SBS), sometimes called “sawed off” for dramatic effect. The Federal laws define a SBR as a firearm with a rifled barrel shorter than 16 inches, and/or an overall length of less than 24 inches. A short barreled shotgun has a smooth bore barrel less than 18 inches, or an overall length of less than 24 inches. [Why the different lengths for rifle & shotgun barrels? No one seems to know, but that’s the law!] Once again, how do you measure them? It’s still easy.

(It is done this way because some small firearms have curved rear stocks, to be held in one hand while the other is on the forend.)

“Silencer” – sounds sinister, doesn’t it? But the real name is suppressor, as these devices only reduce or ‘suppress’ the sound of a shot – only in the movies are they silent. They were invented by Hiram Maxim’s son, who also designed “suppressors” for cars – we call them mufflers. (Maxim Sr. developed the first functional machinegun). Federally, they are defined as “any device that reduces the sound of a shot.” I know of one case where someone built a stand, and placed a 30 gallon drum on its side in the stand. He then filled the inside of the drum with insulation, with the intention of shooting through it with his rifles so as not to disturb others. ATF (now ATFE) found the device and made him destroy it or face Federal criminal prosecution. So they do NOT have to be attached to the gun to be a suppressor. And yes, taping an empty plastic soda bottle to the end of your .22 makes it a suppressor, and you’re a felon! (Plus they are not very effective).

Suppressors are the fastest growing part of this community, as several states have made them legal for hunting. As more folks (like us) have moved into the “Urban Wildland Interface” as firefighters call it, some have objected to hunting with firearms, thus reducing the available area to hunt. Suppressors allow hunting closer to these homes – but be aware of the law in your state. In Arizona, it is illegal to hunt within ¼ mile of a dwelling without the resident’s permission. And in almost all cases, you still need to wear hearing protection.

The next category is Any Other Weapon – AOW. This is basically anything that is a gun, but does not look like a gun. Cane guns, pen guns, the very, very rare Nazi belt buckle gun, these are all AOW’s. They go through the same process as the others for purchase, but the fee is only $5.

Lastly are Destructive Devices – anything that explodes and any firearm that uses fixed ammunition larger than ½ inch in bore size. In this category there are the “regular” explosives – dynamite, C4, etc. Also, just added to the list are the “binary” explosives like Tannerite. The components are OK if they are separate, but once they are mixed, ATFE says if you move them, you need all the permits as for any other explosive.

I have met folks who own such things as a 20mm Swedish recoil-less rifle, a French 35mm anti-tank gun, even a 3” Naval cannon, mounted on a flatbed truck. With the proper papers, they are all legal – and impressive!

To be continued in: AUTOMATIC?! How Do I Get One?

(Thanks to my unnamed friends who let me photograph their machineguns.)